In total honesty to the reader and those who care, I jumped on this game the second I saw the title, much like the oft-lored start of Samuel L. Jackson’s involvement with Snakes on a Plane. I believed that three things would be in this game: rainbows, toilets and unicorns. Fantastico Studio, who clearly made it their life’s mission to not let me down, delivered all three of these things in spades. Rainbows? Hell yes, there are rainbows everywhere, from the eye-stabbing designs of color explosions to the loading screen of what is either soft serve ice cream or poo. Toilets? You literally fly off onto your missions on the seat of a toilet, suffering from massive diarrhoea from unicorn flavored ice cream. Unicorns? They’re everywhere, urging you on, cheering you, and you have to pick a level from between their uncomfortably muscular thighs. Rainbows, Toilets and Unicorns. Triple-check.

But then it gets better. This is a bullet hell vertical shooter, and it’s done SHOCKINGLY well. The concept is that you are a single-hit vessel (your character is a dude on a toilet, you aren’t really well armored) and you need to take down wave after wave of enemies, fighting a couple of mini bosses and culminating with a massive boss. As you shoot down icon enemies, they drop purple gems that build up your Sparklebarf percentage, because sure why not. Getting to 100% gives you a level up, and your firepower increases. There are powerups that you can grab, but they’re temporary and fleeting, and the real advantage comes from those gemstones. Thus you develop a very serious and difficult balance between agility and accuracy. You can’t get those gems if you don’t shoot the enemies, you can’t powerup unless you collect those gems, and you will instantly die if you crash into ANYTHING on the way to either getting those gems or trying to grab a floating powerup.  You aren’t invincible, not by a longshot, and you need to do your best. 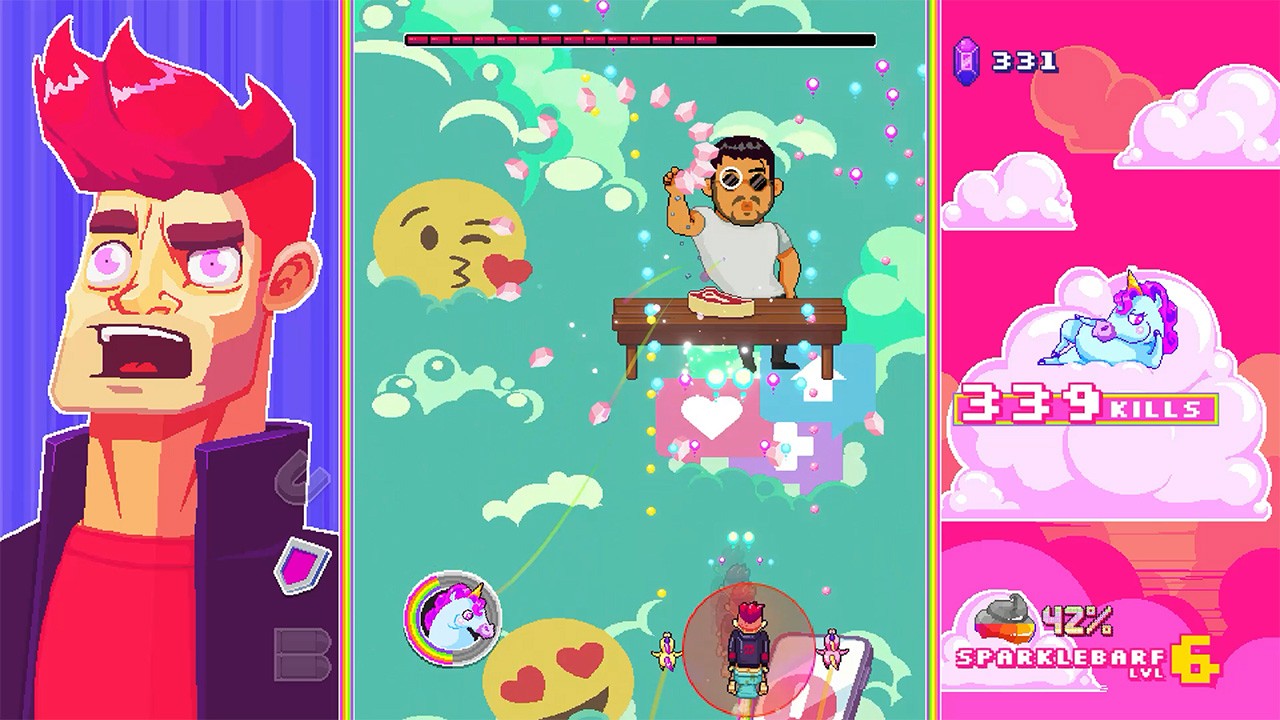 The controls are very tight, I need to point that out from the start. Rainbows, Toilets and Unicorns has a few misgivings that I’ll touch upon in a moment, but the handling is simply not one of them. You have a fantastic hitbox that is well adjusted to your movements throughout space and flight, and the ability to deploy your rechargeable Unicorn Tsunami attack (called the Rainbow Splash) is the difference between life and death. Those powerups all have their own important usage: Shield gives you one extra hit, Firepower doubles your current bullet spread for about ten seconds, and the Magnet draws those gems in from a greater distance. These powerups also drop in the middle of boss and miniboss fights after you hit them so many times, so they can be useful in the middle of your greatest peril, though, arguably, that Magnet doesn’t do a whole lot when you’re just trying to avoid the bullet spray from sofa-jumping Tom Cruise.

You didn’t misread that: one of the earlier bosses is none other than the meme-inspiring presentation of Tom Cruise losing his mind on Oprah’s show and stomping on her couch. For those of you confused, this event took place in 2005, and this is also a perfect moment to present some of the misgivings about the game. For whatever reason, Rainbows, Toilets and Unicorns feels the need to inject and overdose the player with pop culture as the crux for the invading forces that you need to deal with. This is anything from the common enemies of the Facebook thumbs up and the Reddit upvote/downvote arrows to mildly more contemporary icons, like the Salt Bae dude from a couple years back.  I think Britney Spears or Paris Hilton may also be a boss, I genuinely wasn’t sure. You also fight a literal Flat Earth at one point, plus the Pope, plus what looks like the entire Disney movie catalogue in one long level. It’s…it’s a lot to take in, and it can be a bit of a turn off when things get too weird. It’s not nearly as heavy handed as a certain shooting game that I played some years ago, but I suppose it was the only natural progression to make when you already have a game about a dude jettisoned into space by his own Roy G Biv dookie. 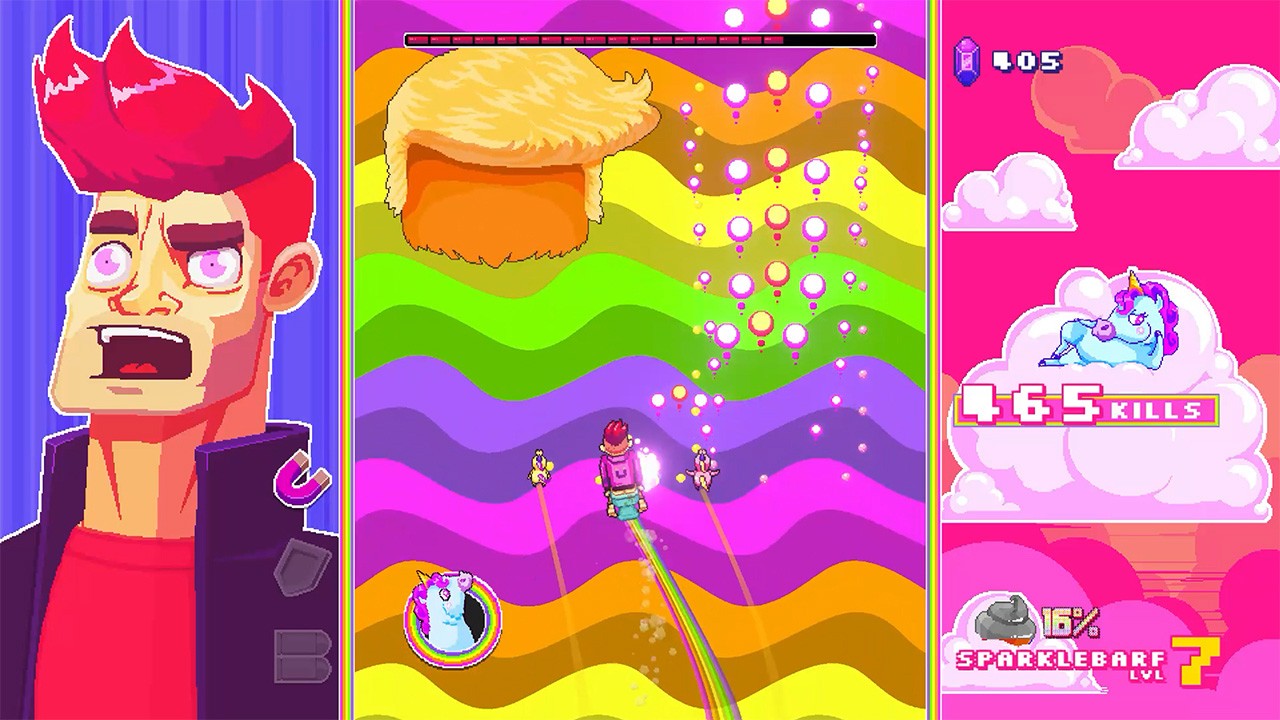 But, all personal inflection about the choice of certain settings in the game, it genuinely is a well done and enjoyable game. With Rainbows, Toilets and Unicorns, you have a fantastically compiled and designed game on the Switch that never lags or suffers from frame drop during the course of the five surprisingly long stages. The objective to hit hundreds of enemies and targets, collect all these gems, amp up your power and do it all without taking a hit takes skill and practice, and the hilarious backdrop makes it fun and enjoyable to keep doing. The sprites are very recognizable (save for the blonde mini boss that I mentioned earlier), and you can always get a good chuckle out of realizing you just outmaneuvered an X-Wing from your toilet, on your toilet. Plus the soundtrack is fantastic, and very appropriate for the entire game’s setting. It’s got some of that electronic happy hardcore that keeps you in the shooting mindset and makes life entertaining and fun. And yea, maybe it’s a bit on-the-nose with all the groups it’s attacking, but the world is weird, and I enjoyed shooting down a certain massive blond toupee. The world’s gone to the dogs, why not poke fun at it?

Simply put, Fantastico Studios really brought heart and some much-needed levity through their game, and Rainbows, Toilets and Unicorns is more than satire and hilarity with a touch of raunchy humor. It’s a well executed, thoughtful danmaku that utilizing silliness as a fantastic vehicle for challenging gameplay, great pattern spreads and a ton of replay. We admire and acknowledge the shooters of the past for what they’ve done, and we wish well the shooters of tomorrow for what they will bring. But Rainbows, Toilets and Unicorns is a shooter for RIGHT NOW, and what we all need now is to shoot a cartoonish bomb from a Bugs Bunny cartoon until it explode and takes out all the neckbeards around it. Because I need those gems to best lay the smackdown on what looks like a mutated barista, and I’m proud to say that.

We are now in a reality where this game is the most accurate representation of the world today, and I loved every second of blasting everything that showed up.