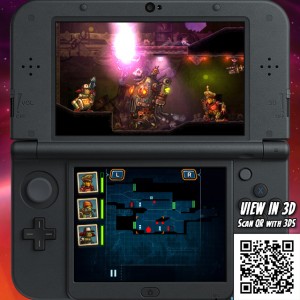 After the little known SteamWorld Tower Defence and the much loved, and really rather brilliant, SteamWorld Dig, up and coming Swedish development team, Image & Form complete their somewhat unofficial robot-western trilogy with the equally fantastic, SteamWorld Heist, a 2D turn-based tactics adventure that incorporates elements of Disgaea, Valkyrie Chronicles, XCOM and Fire Emblem while still managing to retain a sense of its own unique identity. It might not do anything particularly new on a mechanical level, but it’s pleasingly unique art design, charming sense of humour and pitch perfect gameplay ensures that SteamWorld Heist sits comfortably alongside the more illustrious stalwarts of the genre.

One might think that the 2D perspective would have limited the tactical possibilities in a game of this ilk, and while it certainly isn’t as deep as some of the more quintessentially ‘hardcore’ tactics games on the market, SteamWorld Heist manages to find a perfect balance between tactical nous, accessibility and good old-fashioned fun. With its relatively small stages and surprisingly quick-fire gameplay, this is a comparatively fast paced affair (by the standards of the genre), and proves a perfect fit for on-the-go, 3DS gameplay. Don’t get me wrong, there is still plenty of nuance to be found here – those looking to collect the full selection of stars available will really need to use every trick at their disposal – but equally, for those looking for something a tad easier to get into and something a lot less time-consuming, SteamWorld Heist delivers the kind of pleasant middle ground that helps it stand out from the crowd. 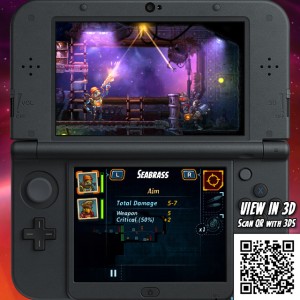 At its core, this is a relatively simplistic experience – set upon a number of procedurally generated enemy space craft, you essentially move and shoot your way across a number of fixed rooms in order to complete a number of varied, but fundamentally very similar objectives. Whether it be defeating all of the enemies on board, collecting all of the loot available, taking down bosses or destroying specific parts of the ship, the core gameplay is essentially made up of, well, moving and then shooting. That might be a horribly over-simplistic description of the gameplay, but yes, in SteamWorld Heist, you move your character and then you shot……..and that’s about it.

What makes the game special, is the perfectly balanced gameplay and brilliant cast of enemy characters; from standard cannon fodder and shielded enemies to teleporting aliens and huge boss battles, SteamWorld Heist does a great job of keeping you on your toes by offering a wide array of strategic options and tactical battles. Whether it be the enemies in your way or the design of the craft itself, success in SteamWorld Heist demands the use of every element of its simplistic but brilliant nuanced design.

Whether it be the careful use of cover, the correct choice of teammates or the simple act of making every shot count, Image & Form’s latest belies it’s somewhat light-hearted tone and pleasantly cartoonish aesthetic to deliver a challenging and robust gameplay experience. This is seen principally in the games’ eclectic cast of playable cowboy robots – while each is imbued with the fantastic sense of character that we have come to expect from, Image & Form’s, SteamWorld series, it is their individual abilities and how they can be combined with their teammates that really make them stand out as undeniably unique characters. From Seabrass to Sally, the combination of character specific primary abilities and unique secondary powers ensures that SteamWorld Heist is far deeper than the fundamental gameplay might initially suggest. 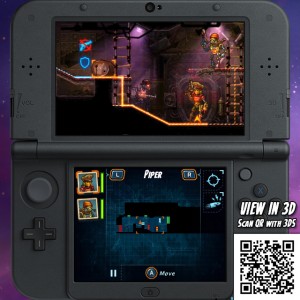 Sure, the core gameplay is simple, but with the ability to make shots ricochet of walls, the basic process of firing your weapon is often far more fun than it has any right to be in a tactical adventure of this kind. Beyond the characters’ breathing adding an additional sense of skill to each shot taken (do robots breath?), the ability to bounce bullets of walls really does turn each and every room into a cool little puzzle that can be defeated via a combination of smarts and more traditional gaming dexterity. Add to that the ability to shoot off enemy hats and you’ve got a system that provides a continual sense of engagement regardless of the enemy being faced or the odds stacked against you. Ok, shooting off enemy hats probably doesn’t sound all that exciting on paper, but along with the 100s of guns available for collection, hats can also be collected and are often done so my taking them clean off the noggins of enemy troops. Yes, it’s little more than a strange meta game incorporated into the core experience, but for one reason or another, it’s surprisingly addictive…..and, well, oddly entertaining.

It might not be the most tactically nuanced example of the genre, but I’ll be damned if it’s not one of the most enjoyable. A perfect fit for the 3DS, Image & Form’s latest does for tactical adventures what SteamWorld Dig did for action platformers. The art design is gorgeous, the world and characters memorable and the gameplay slick and addictive. The procedurally generated nature of the stages does lead to a handful of duds, but for the most part, this is a carefully considered and consistently thrilling take on one of the more traditionally slower-paced genres around. The core gameplay might well be extremely simple, but this is a deceptively deep experience, one that manages to effortlessly balance challenge and accessibility.