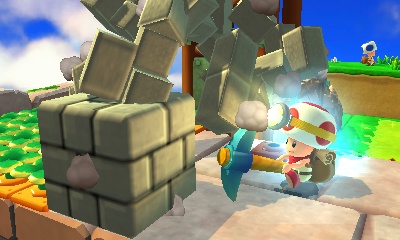 Like so many games initially stuck on the underrated Nintendo Wii U, the fantastic and utterly charming, Captain Toad: Treasure Tracker wasn’t experienced by nearly enough people when it was originally released back in 2014. Luckily, like many of those previously hidden gems on the Wii U, Captain Toad is getting a second chance to find a much larger audience on the significantly more successful, Nintendo Switch. Sure, makes perfect sense. But the 3DS? The seven year old 3DS? Yep, Nintendo just won’t let the little handheld die away, and after a handful of surprising and largely, very enjoyable releases over the last 12 months, Nintendo have continued that trend by porting Captain Toad to the 3DS.

I guess the question is – does it work? Rather surprisingly, the answer is a resounding yes. Beyond the obvious technical limitations of the 3DS, Captain Toad was also something of an unofficial introduction to twin stick gaming, something that the 3DS is rather famously lacking. Sure, you can play it in a slightly more traditional manner using the New 2DS and 3DS nubbin thingy, but for many (myself included), it’s either d-pad (nope) or touch screen controls. While I’m not  big fan of using the awkwardly placed d-pad to control the camera, flipping the stylus about the screen is surprisingly intuitive and does a more than acceptable job of replacing that missing second stick.

Perhaps more surprising is just how good it all looks. Sure, the resolution has been dropped and it runs at 30fps rather than the 60fps that you’ll find on the new Switch version, but that 30fps is locked in place and the visuals, while invariably falling short of the Wii U and (even prettier) Switch versions, still looks quite fantastic by 3DS standards. This is a genuinely great looking game, one helped no end by Captain Toad’s brilliant art design and simple but utterly effective aesthetic.  It’s also proof that, against all odds, the old as dirt 3DS (a handheld that arguably felt behind the times when it was released back in 2011), can still deliver a genuinely pretty gaming experience. 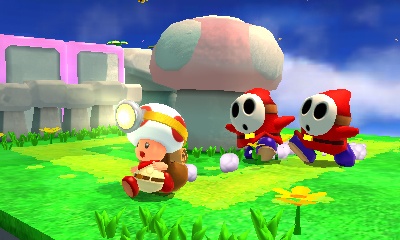 So, with the quality of the port not an issue and the control scheme much more successful than I would have imagined, it essentially comes down to the quality of the original game and, rather unsurprisingly, it’s just as good as it has always been. There are a few extra Super Mario Odyssey stages (a game in which Captain Toad makes multiple brief appearances) to add to the already existing 64 standard levels and 18 bonus ones of the original, but these are brief (if admittedly charming) additions that do little to add to the games’ overall longevity. There is still a fair bit to do here, but due to a lack of genuine challenge, some gamers might feel slightly short changed. Saying that, if you’re looking to 100% the game, you can happily add on an extra 20 odd hours as you try in vain to complete the horrendously unforgiving final stage, Mummy-Me Maze Forever. I’m sure there are plenty of expert gamers out there who will make much shorter work of it than I did, but my God, that stage drove me up the damn wall. It’s an horrendous difficulty spike for a game that is otherwise rather easy and one that, while I hate to admit it, I totally gave up on. I’m a bit of a completionist, but at some point, the threat of genuine violence become a reality so I thought it best to throw in the towel.

That maddening anomaly aside, Captain Toad: Treasure Tracker is a relatively gentle experience made slightly more challenging for those who wish to collect the three diamonds available in each stage. Personally, with so many on view as you look about each perfectly crafted location, I don’t know how you couldn’t collect them all. Either way, the game is never overtly challenging, but equally, it’s never a Kirby-esque cake-walk either. Additional level specific challenges and hidden Pixel Toad’s do stretch out the experience a little further, but these are only likely to interest completionists.

With Captain Toad unable to jump or attack in any meaningful way, like the Super Mario 3D World mini game from which this game is derived (another game that is begging for a port to the Switch), Captain Toad: Treasure Tracker is all about careful planning and smart use of the camera. This really is a puzzle game at heart, and if you plan on collecting all of those diamonds, you’re going to need to explore every nook and cranny of each small but perfectly designed stage. Exploring is as much about smart use of the camera as it is control of Toad with each stage feeling like something tangible you could essentially hold in your hand and view from every angle. Again, it’s a smart design, one that successfully separates Captain Toad from his Nintendo stablemates while still allowing for the game to feel like a natural fit within the wider Mario universe. 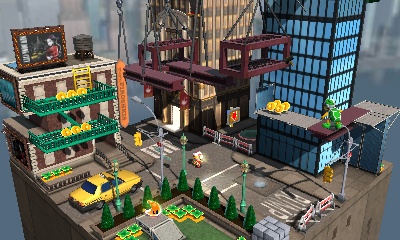 While the structure of the game never really changes as you move from one small stage to the next, the eclectic selection of visual themes combined with some enjoyable and carefully crafted boss battles ensure that Captain Toad remains enjoyable throughout. Sure, you’ll be facing that damn bird more times than you’d probably like, but intelligent twists on the core design that include smart use of flip paths, a super pickaxe (a take on Mario’s Super Hammer) and P-switches help to keep the experience feeling fresh despite your surrounding remaining largely unchanged.

It might not be all that challenging (with the obvious exception of that damnable Mummy-Me Maze Forever stage), and it could be argued that it’s a relatively short experience, but with plenty of collectables, fantastic visual design and pitch perfect puzzle-based gameplay, Captain Toad: Treasure Tracker proves another Wii U gem worthy of its second chance on more popular hardware. The fact that its second chance includes a port to the 3DS remains a surprise, but thanks to its fantastic visuals, smart use of 3D and its well implemented use of the stylus-based camera control, the move to Nintendo’s apparently un-killable handheld has proved an inspired choice.