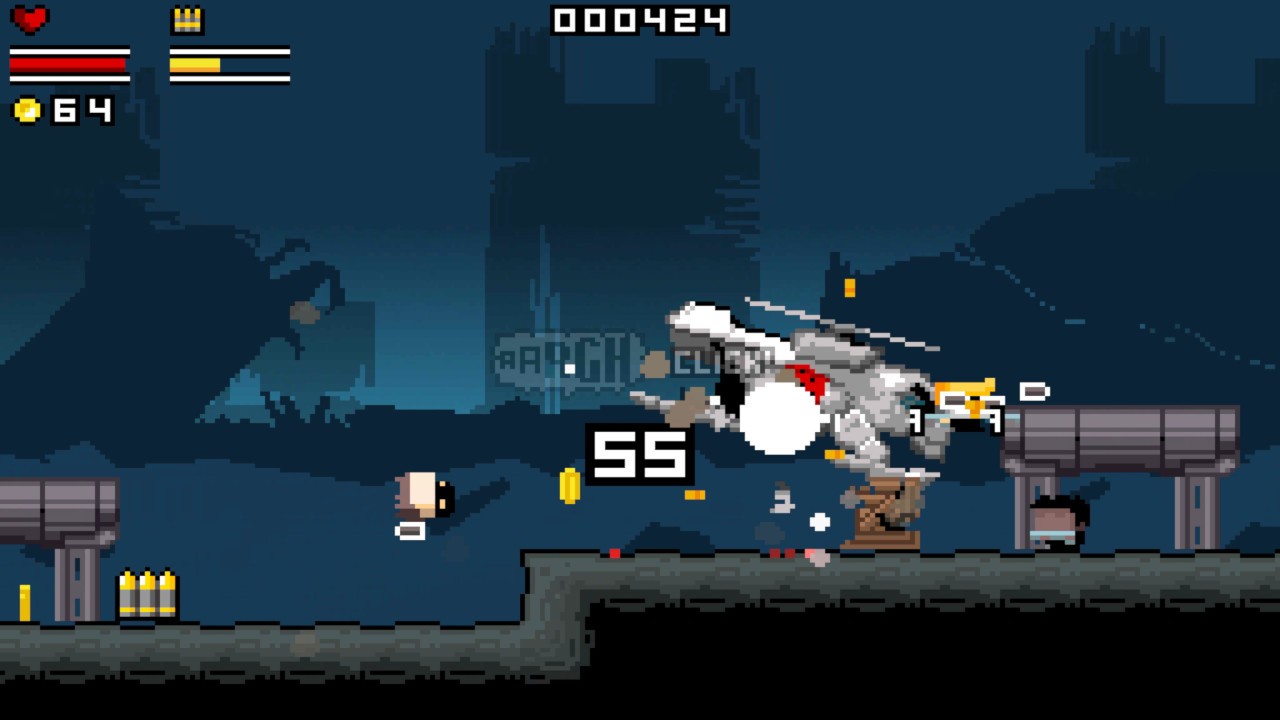 OrangePixel had a dream. They dreamt of a game where you had elements of a certain other famous bullet-intense action game with the word Slug in the title, but also had a more definitive replayability aspect. A game where almost anyone could pick it up and go nuts because the buttons were limited, the objectives were clear and the ability to achieve everything the first time through was impossible. This game could either be purchased outright, or be laden with ads so that, no matter what, OrangePixel got paid. The result was a mobile game that did a decent amount of sales as it crossed to both markets and a Steam release that was almost entirely overlooked. Still, that never stopped a game from coming to the Nintendo Switch before, now has it? The result is the release of Gunslugs, a 2D, pixel art action game with bullets, chickens, explosions and some questionable entertainment.

The premise is simple: the Black Duck Army is a group of baddies that you, dear awesome agent of freedom, need to stop. Choosing from one of two avatars (with more unlockable), you get airdropped into a series of areas where you’re immediately beset on all sides by baddies with bullets and incredibly incendiary surroundings. You can take a few hits, but medkits are your friends. Your bullets might feel infinite, yet picking up ammunition is the key to survival. Take down the targets, blow up the baddies, deal with the big boss and then call it a day. Oh, and then get ready to do it all over again, because you had an objective that was entitled “Play something Mr. DJ” and you don’t know what the hell that means, but you forgot to do it so do it again. 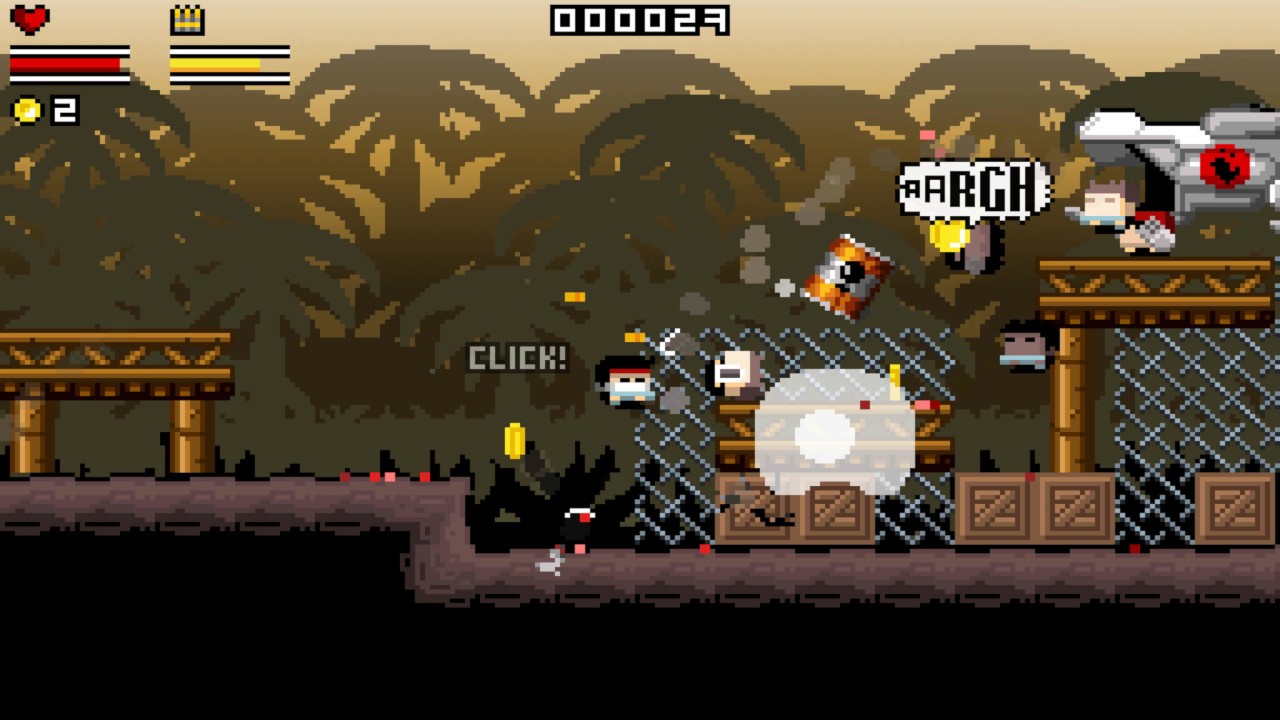 Let’s address some things from the start. First, OrangePixel last crossed my path many, MANY moons ago with Meganoid, which I have fond memories of in terms of roguelite exploration and some pretty good generation of worlds and ideas. However, Gunslugs is, strangely, an older game by a large margin and not a very well known one at that. There have been three Gunslugs games to date, with the most recent being just about a year old and, which technically a different gameplay approach (stealth tactics vs. shooty action), is still the best-looking entry. Even barring that, there’s a Gunslugs 2 that seems to have better graphics and more detail to the world at large, yet we start here with the first Gunslugs, that’s nearly six years old (maybe more, depending on mobile release dates). I don’t mind that it’s older, but time hasn’t been kind to Gunslugs, and it seems like there may have been some better choices for OrangePixel in terms of what to bring to the Switch next.

For example, Gunslugs takes almost no strategy in order to complete. There are two buttons: shoot and jump. If you hold down shoot and move forward, you will mow down enough enemies and crates to drop a steady supply of bullets and health kits to not care about things. Like, almost anything. The name of the game is as such: kill as fast as you move. Make sure your ammunition meter doesn’t drop below 40% so that you’re set for when a boss arrives. When you meet a boss, get to jumping and shooting as long as they’re on the screen. Continue until the boss is dead. Do you best not to jump directly into the line of fire. Eventually, the game will be over. Of course, if you want to do it well, you stop shooting occasionally so you can figure out what the hell is going on, but that’s more of a suggestion than anything else.

There are several points of wonkiness that are bizarre to me in Gunslugs. Sometimes, when you stand too close to a crate, you shoot over the crate, which is great if this was a tactical shooter that required you to seek cover. However, nine times outta ten, you’re trying to shoot the crate to see what’s inside it. Also, for a game so focused on ammunition, Gunslugs uses a meter instead of a number counter to address your bullet situation. This means vaguely guessing how many shots are left in order to make it work, and then needing to see how very wrong you were. Sometimes, Gunslugs can overwhelm you with enemies, and finding out the hard way that you had four bullets instead of ten sucks ass. Plus, there’s the whole matter of needing to stay alive, which sounds easier than it is. While the game has nearly no strategy in terms of shooting and running, you still are very much at the RNG’s mercy if they decide not to drop health for a few dudes because they heard me badmouthing the game. It’s a bit rough, particularly when you’ve been playing for a while as Gun Chick and you want to change to Sly Rocko, and you have to restart the game from a different point than where you last achieved. 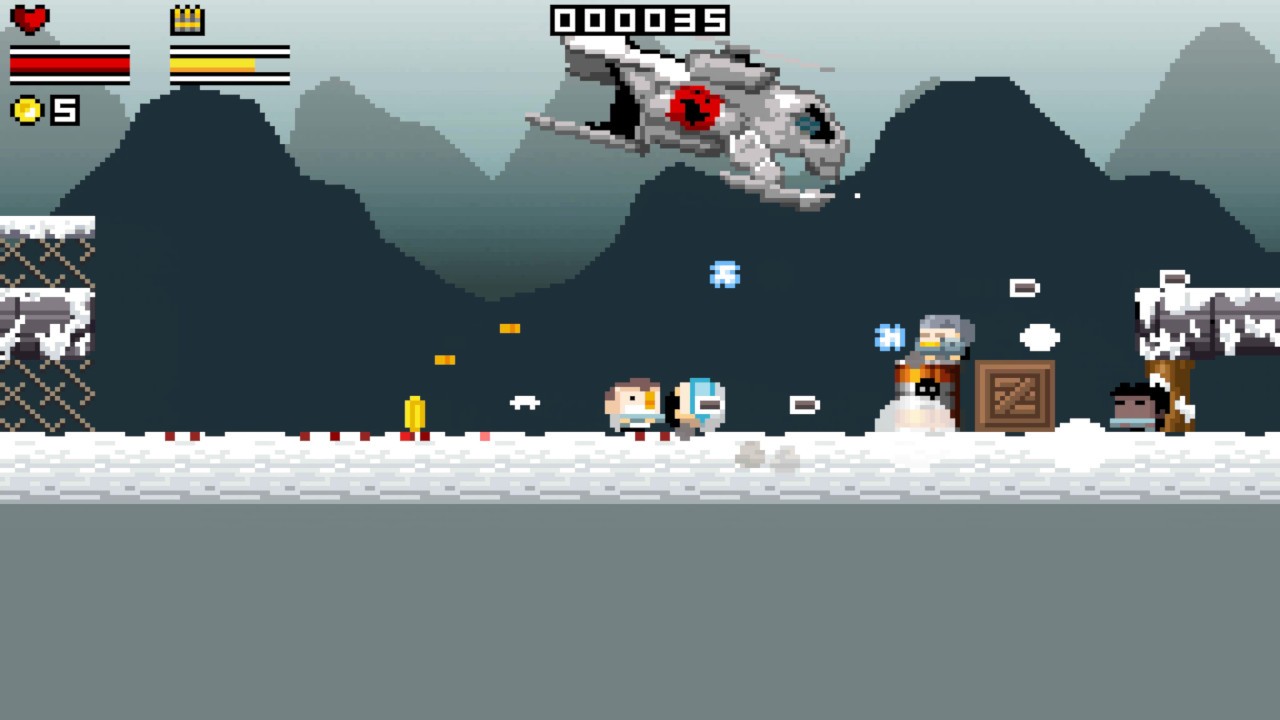 Having said all that, there’s a lot of fun to be had in Gunslugs as long as you temper your expectations. For example, the game is full of ridiculous moments of non sequitur that catch you off guard in the best way. Sure, there’s a lot of action movie dialogue peppered into the NPCs (all read, none written), but other moments of insanity are great and remind you that this game is procedurally generated. Picking up coins might not seem to make any sense until you find a giant Gameboy that you can pay to play and do a knockoff Super Mario Land level. Two guns at once is great, but have you ever fired eggs out of a chicken gun? Plus, if you’re fast and smart, you can get a whole mess of enemies chasing you, firing worthlessly like they were temple guards in Indiana Jones, then detonate the lot of them by stepping on a landmine and fleeing before the explosion kills maybe twelve NPCs at once. While the Gunslugs game isn’t my favourite by any means, I love that it can capture moments like this and deliver in a fun and chaotic way.

With some chunky pixel graphics and repetitive but enjoyable chiptune music, Gunslugs isn’t promising anything it’s not delivering. It’s a mobile game scaled up to be on the PC and consoles. It’s short and pretty flat, but it’s fun and allows you to challenge yourself. Achievements can be unlocked throughout, giving some semblance of meaning to replay and exploration. There are characters to discover and easter eggs throughout, and it’s genuinely not a bad time. I mean, there weren’t any glitches, and I never once put down my Switch in frustration. The matter, then, becomes the price. I have no idea what this thing is going for on mobile, but it’s currently a buck on Steam and full price on Switch. There’s plenty to be discovered, and this can be fun. Decide if you want to save up for a much larger experience or drop a couple of bucks for some simply pick-up-and-play gaming, and then go from there. Personally, I hope we see the other Gunslugs in the future: I’m now genuinely curious how the game changed….