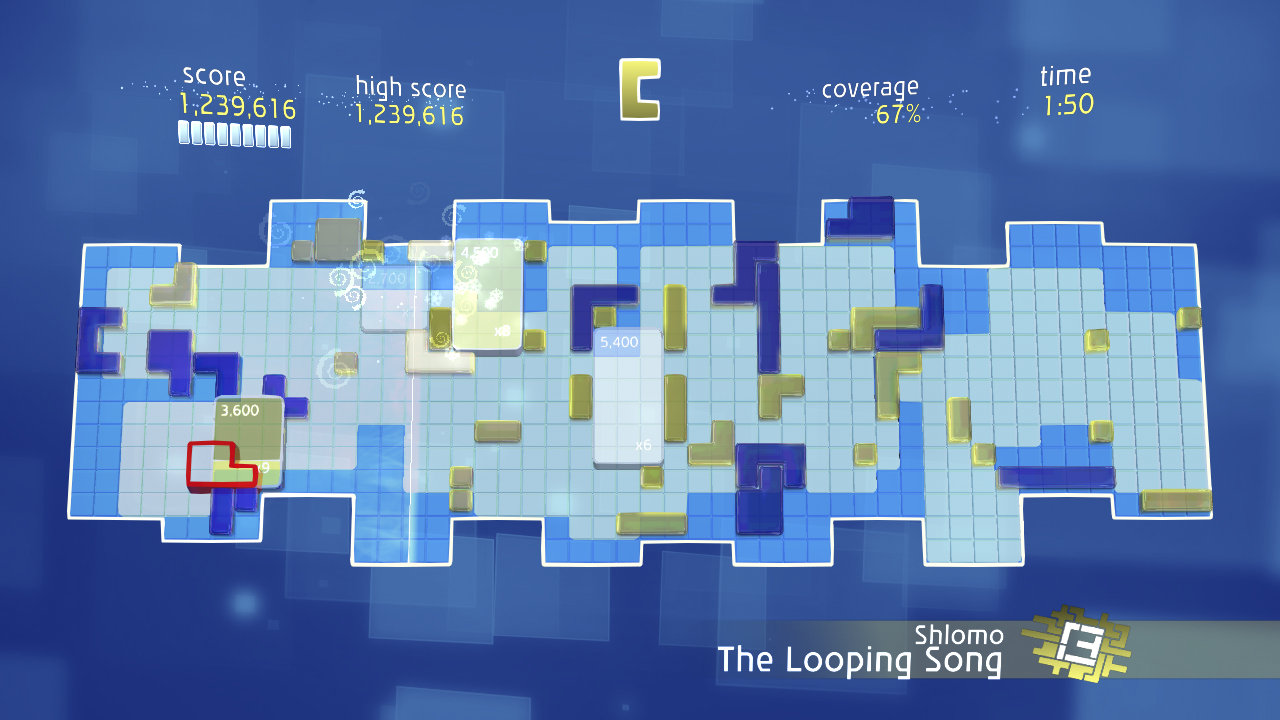 Last year, non-profit games publisher, OneBigGame and developer, Zoe Mode released Chime on XBLA and PC. Not only did the game’s proceeds go to charities such as Save the Children and the Starlight Foundation, but it also happened to be an absolutely fantastic music puzzle game. While its sequel, Chime Super Deluxe may not have the same altruistic aim, the results are once again quite brilliant. With 10 simple but perfectly formed grids, 10 first-rate audio tracks and the added bonus of local 4 player co-op and competitive multiplayer, Chime Super Deluxe offers more than enough to warrant its £7.99 price tag.

At a glance, it would be easy to dismiss Chime and its superior, content-rich successor as cheap Lumines knock offs, but to do so would be to do Chime Super Deluxe and developer Zoe Mode a great disservice. Although visually and structurally similar, thanks in large part to Chime’s consistently outstanding, progressively developing soundtrack, Chime Super Deluxe manages to successfully move out of Lumines’ not inconsiderable shadow.

Chime Super Deluxe, like its predecessor, tasks you with covering as much of the grid as possible with the Tetris-like blocks provided. You are required to make quads covering a minimum space of 3 by 3 that can be expanded upon and increased before the beat bar passes over it and locks its size in place and resets your multiplier. At its core, it’s a simplistic but nonetheless addictive puzzle game, but once combined with the games brilliant, expanding soundtrack, it becomes something altogether quite special. 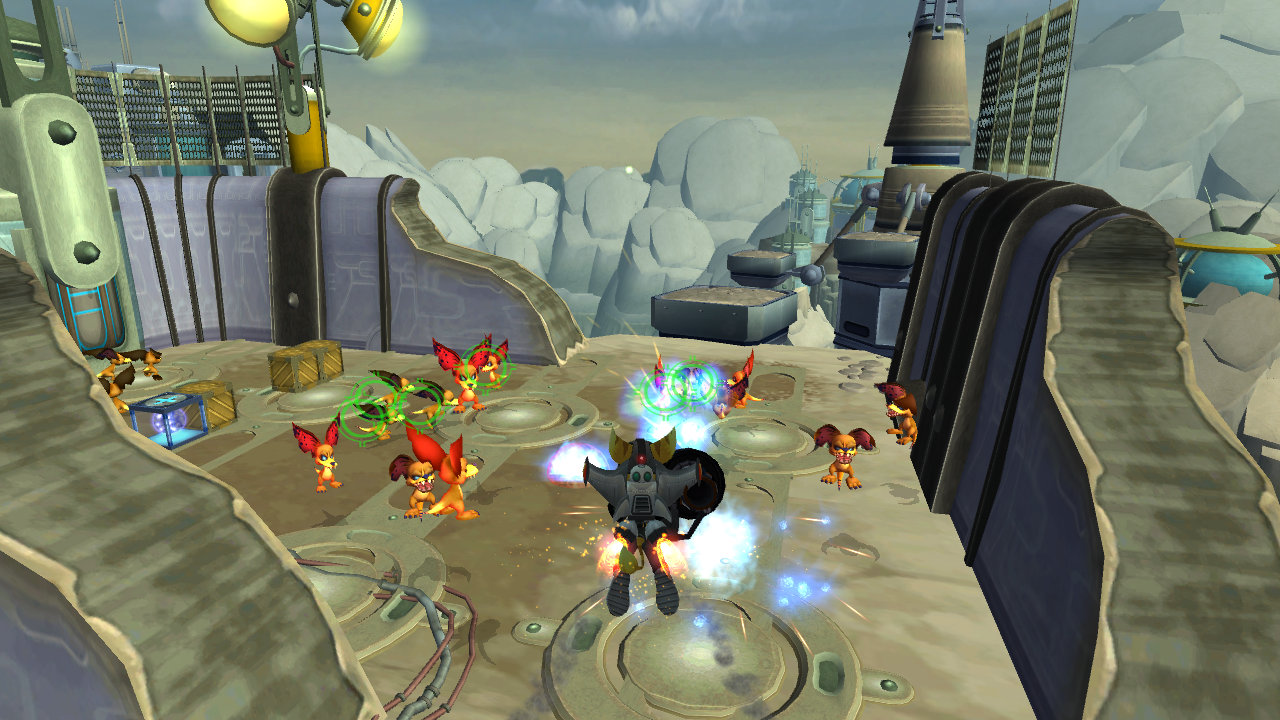 Each time that the beat bar passes over a successfully completed quad, an extra layer of music is added to the base level used at the start of play. This gives the experience an ever escalating sensory impact as the music becomes more detailed and complex as the challenge becomes more difficult. It’s hard to express the effect this has on the overriding experience, but needless to say, it turns a solid puzzle game into a truly memorable experience.

While the core concept is a solid one, it is the quality of the music provided and the drip feeding of each track’s complexities that really ties the room together, so to speak. I’m not exaggerating when I say that every track on Chime Super Deluxe is, at the very least, extremely solid, but for me personally, if was the chiptune inspired Sabrepulse and the haunting ‘For Silence’ by Paul Hartnoll (think a more urban inspired Sigur Ros) that really stole the show.

Each level is unlocked by covering at least 50% of the previous levels grid and with 3, 6 and 9 minute play times available, it certainly won’t prove much of a challenge to unlock the lot – heck, even getting 100% coverage on all 10 grids shouldn’t cause too much of a problem. While this could have potentially affected the games longevity and subsequent value, the addition of online leaderboards will keep many a gamer coming back for months on end. While some of the scores you’ll see will fall immediately into the unobtainable category, beating your friends’ scores and pushing your way up through the ranks can become a hugely addictive experience. 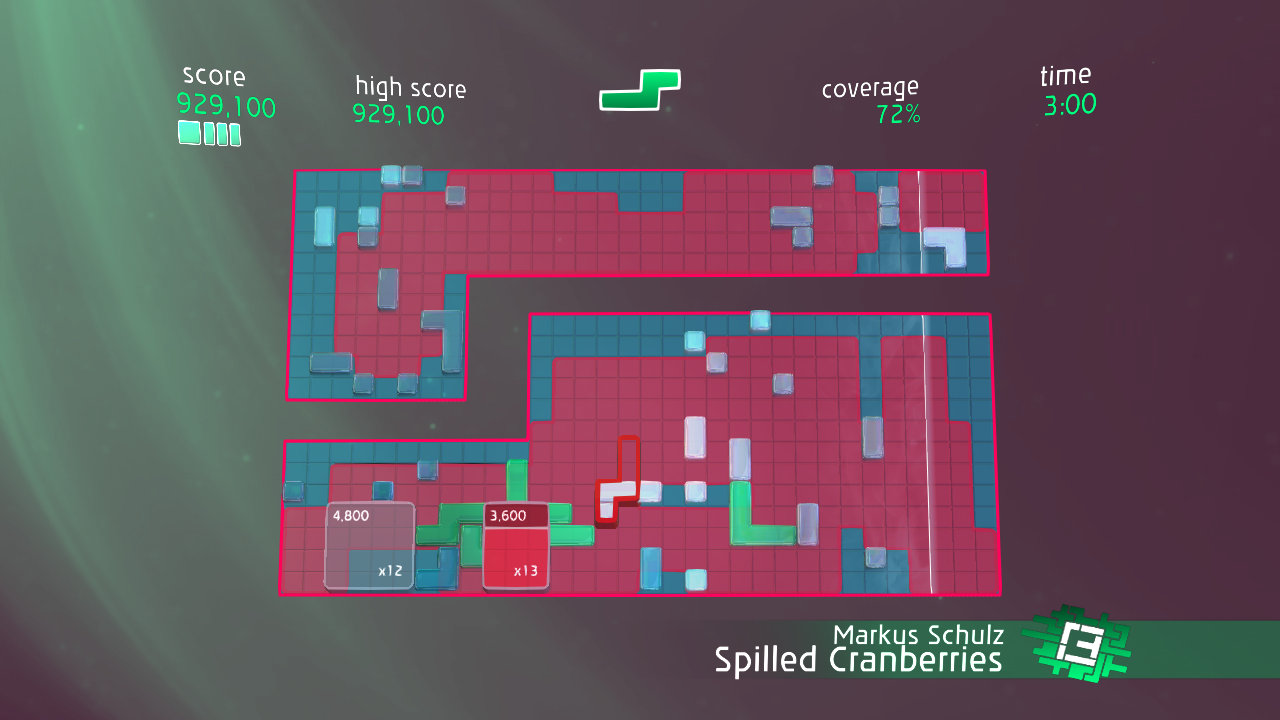 One of the problems with the original Chime is that some players got so good at the game that they could essentially play it forever. That has been solved for Super Deluxe with the timer decreasing each time you clear a board. This not only adds to the immediacy of the experience, but also removes the grinding aspect for many top tier players while giving the game a more pick up and play mentality.

Chime Super Deluxe is essentially Chime with 5 extra grids, tracks and the addition of local multiplayer. It’s a shame that online play wasn’t added, but playing this game with a group of friends in toe is definitely the ideal way to experience its charms. Super Deluxe may not have moved the series forward in any way, but when the quality on display is of this high a standard, more of the same will do just fine.