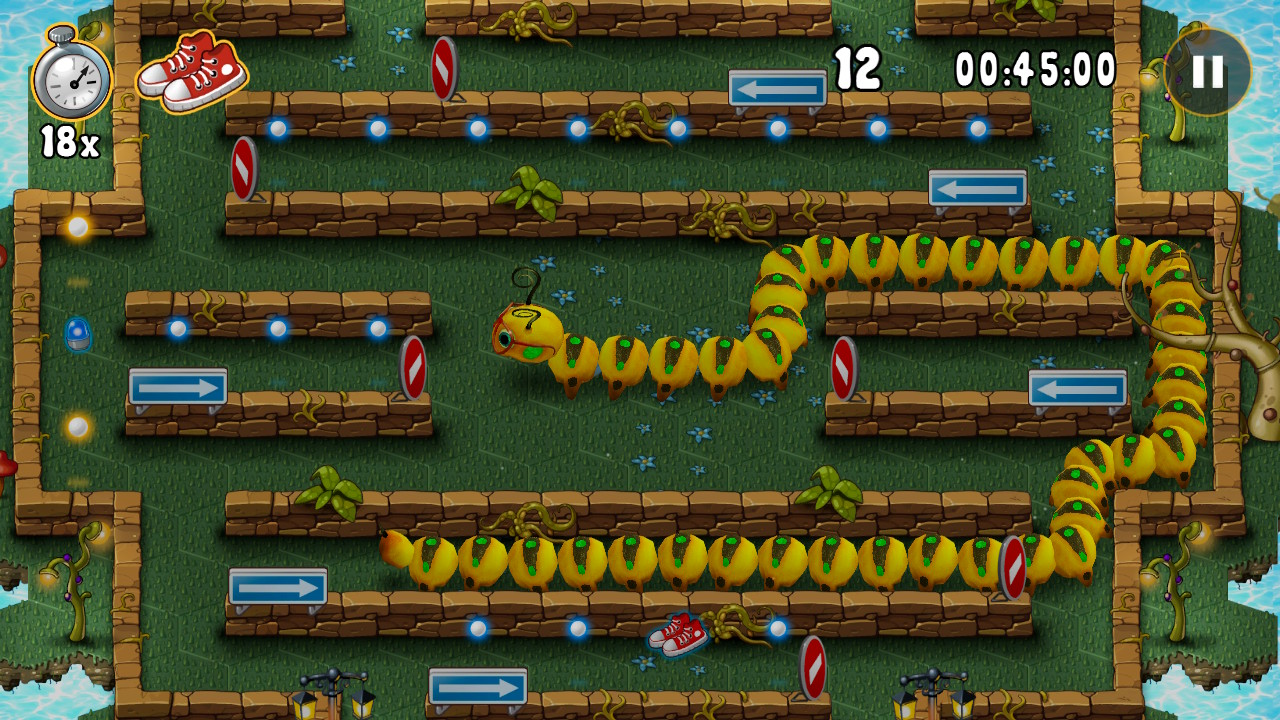 Who here remembers Snake? A game that was abundant in the nineties and usually found pre-installed on old Nokia mobile phones. Its basic premise was simple: eat the dots on the screen while your body grew ever longer which made it increasingly difficult to manoeuvre around the screen without doubling back on yourself and crashing into your over stretched torso. This simple, yet challenging game developed a bit of a cult following and Millie, developed and published by Forever Entertainment, has built upon this basic template and brought it trundling onto the Nintendo Switch.

Originally released on the PC and the iOS platforms, Millie follows a young millipede who has aspirations of becoming a pilot. With the news that a local aviation school is seeking new recruits, our young invertebrate duly sets off on a journey, across more than ninety challenging levels, in order to fulfil their dreams of getting hundreds of feet in the air! Sorry, but I couldn’t resist!

Crossed between, the aforementioned, Snake and Pac-Man, this puzzle game sees you traversing around elaborate mazes of varying difficulties, collecting dots and trainers until you have gathered enough to open the exit that leads you onto the next level. The more dots you consume, the longer your body grows until manoeuvring it around the tight corridors of the maze becomes increasingly more challenging. With your growing length, the chance of your body cutting off your chosen path increases as it fill and trails around the mazes. If you do manage to block yourself in then the game rewinds, with a time penalty, to a point where you can make a new decision in which direction you can take to avoid crashing into your trailing body again. 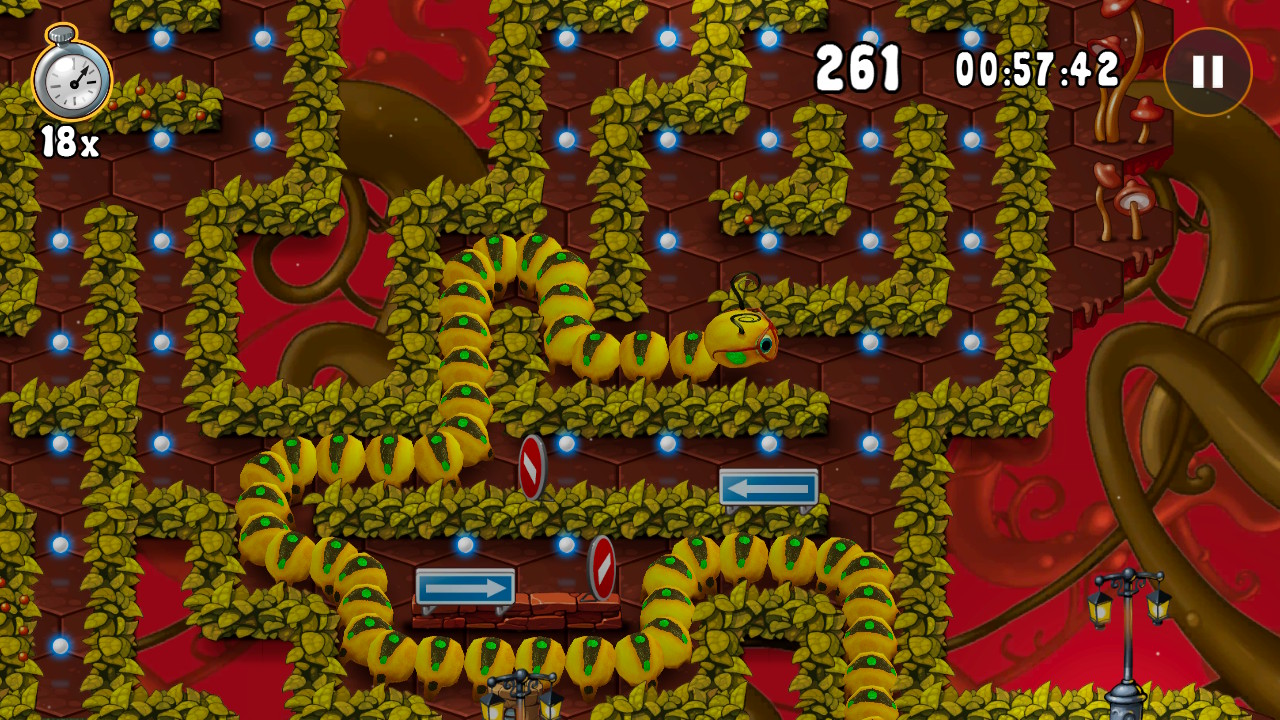 With each level completed, you are then awarded stars, up to a total of three, depending on your level of success. These stars can then be used to purchase power-ups that can help you on your quest. These items range from scissors to help cut your body down to size, OUCH, to hammers that you can use to smash down walls if you need to make a new path for yourself. Each level also contains up to three trainers for you to collect as you journey around them. These, in turn, unlock a variety of mini-games that can be played after every three mazes. These levels take the form of Millie’s dreams that see you flying an aircraft in one of three ways: tracing shapes with a smoke trail from behind your aeroplane, partaking in various races and flying through checkpoints as you battle to avoid clouds. These sub-sections can offer a break from the challenge of the mazes, as well as help to combat an element of monotony and repetition, and are actually quite fun in their own little quirky way.

Each of the mazes offer a diverse and challenging puzzle which certainly requires a level of thinking with movement and direction if you want to succeed. The further you progress, the more challenges each maze throws at you with objects such as bridges, underground tunnels and one-way corridors. Set over three different environments, the levels are varied and colourful, with all of them offering a very real challenge.

Whether you play in TV or handheld mode, the graphics are all bright and colourful and is presented in a very cutesy way. It’s ideal for the casual gamer and has enough charm to suit anyone whether you’re male or female, young or old, there is enough gameplay here to offer a quick burst of enjoyment. However, with it cutesy and child-like presentation, this is very much a title that can easily appeal to children, although I suspect that some of the later levels may present themselves to be a bit too challenging for the younger player. 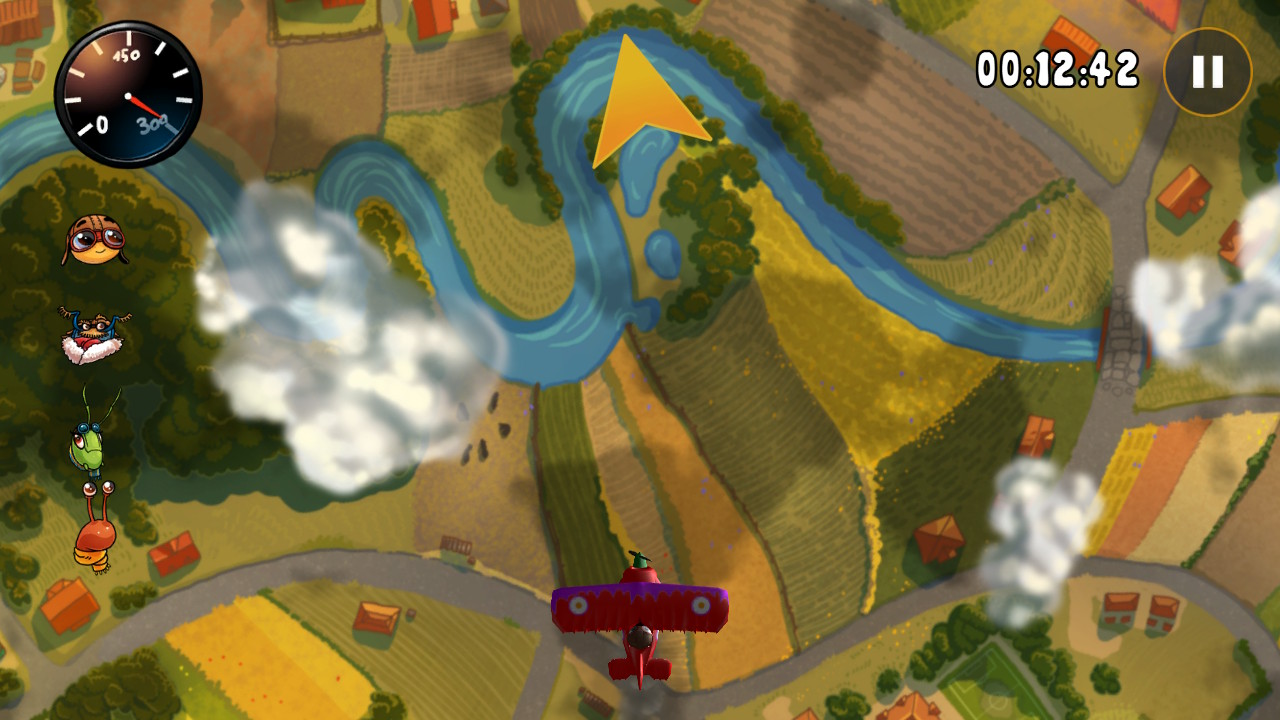 The music and sound effects are equally as charming and serve their purpose well enough, even to the point where the soundtrack becomes a little bit catchy.

Overall, this is a nice little package and a lot of fun can be had with its challenging puzzles and mini-games. As I mentioned earlier, this game is ideal for the more casual gamer, or if you’re a big fan of puzzle games in general, and for its pocket money price, offers a lot of content and hours of gameplay. However, for the more seasoned gamer, this may not necessarily be a title that appeals to you as it can become pretty stale quite quickly. Saying that though, the execution of this game has been well put together and if you were a die-hard fan of the original snake, then this variation on the game will have a lot to offer you; just be prepared for a bit of turbulence as you progress further into the game and the puzzles become far more challenging.