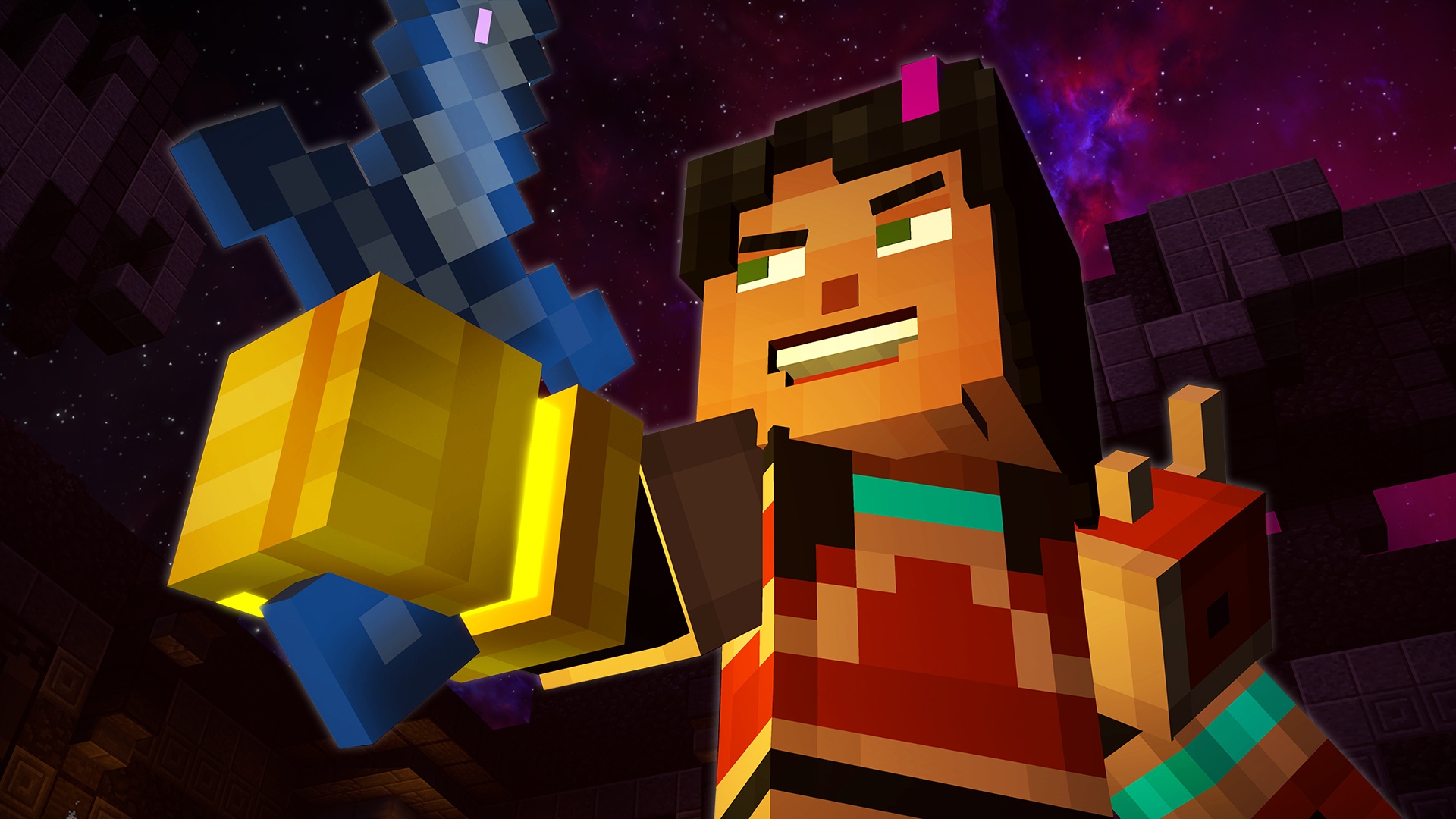 Minecraft Story Mode returns for the fifth and final episode of Season Two. The season so far has been enjoyable, even if the episodes have been on the short side, with Jesse and Petra joined by interesting new characters like Jack and Radar. New foes have also emerged in the shape of The Admin, an all-powerful megalomaniac bent on literally shaping the world the way he wants it to be, and Stella, the leader of Champion City who is so desperate to be Jesse’s rival.

Spoiler Alert: I will do my best to avoid giving away major plot points and twists in this review. However, I will inevitably reference some events from this episode as well as previous ones. If you haven’t played this season or all of the earlier instalments yet, check out our reviews of Episode 1: Hero in Residence, Episode 2: Giant Consequences, Episode 3: Jailhouse Block, and Episode 4: Below the Bedrock first.

Below the Bedrock ended with Jesse and the crew having escaped The Admin’s underground prison and the foreboding world he had hidden under a layer of bedrock (though exactly who escaped with Jesse would depend on your in-game choices). Episode 5 begins with them finally returning to Beacontown, where The Admin has taken control making himself appear as Jesse. 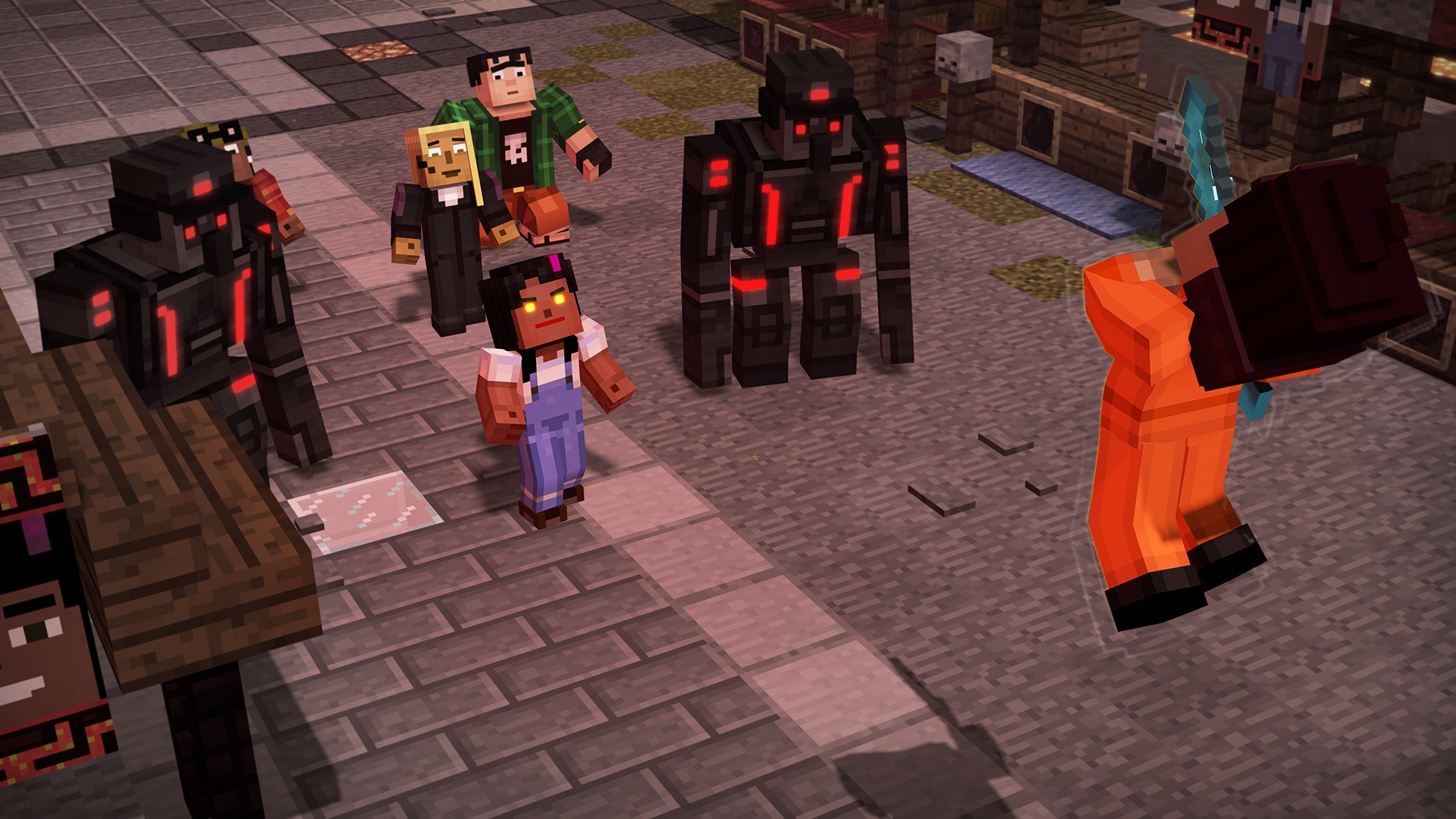 The town now looks like a Minecraft city that has been made by a seven-year-old with over-the-top buildings, bright gaudy colours, and a floating tower with lava pouring over its edges down to the ground. That is not a criticism, however. The redesign fits in with The Admin’s personality and track record of over-elaborate constructions and traps. There is also an air of a dystopian dictatorship with large posters of Jesse hanging from the walls all around the town. The citizens of Beacontown are now living in fear, wondering when and why the benevolent and much-loved Jesse became such an authoritarian autocrat.

As this is the season finale, we see the return of several characters who have not been seen much since the early episodes. Lukas reappears as the leader of the New Ocelots, a group he has set up to take down the ‘evil Jesse.’ We also see Olivia and Axel, who have not been seen since the opening of Episode 1: Hero in Residence and are now forced to stay in Beacontown and give The Admin version of Jesse regular ego rubs. Ninja Ivor is also back for some comic relief after saving Jesse in Episode 4, and we even see the previous incarnations of The Admin as the colossus, the snowman, and Vos all appear during the final battle.

Bringing most of the key characters from this season and the last together for this episode makes for a crowded conclusion but this is well managed. Everyone gets their chance to contribute to the closing stages with their appearances seeming neither too brief nor too over-bearing. We also see a conclusion to the on-going subplot of Jesse and Petra’s friendship and how it has changed since they were just regular citizens of the world in season one. There is further character development for Jack and the star of the new characters Radar. The way Jesse feels torn between her old friend and her new life has been one of the key elements of the entire series and its significance is acknowledged in the final choice you have to make. 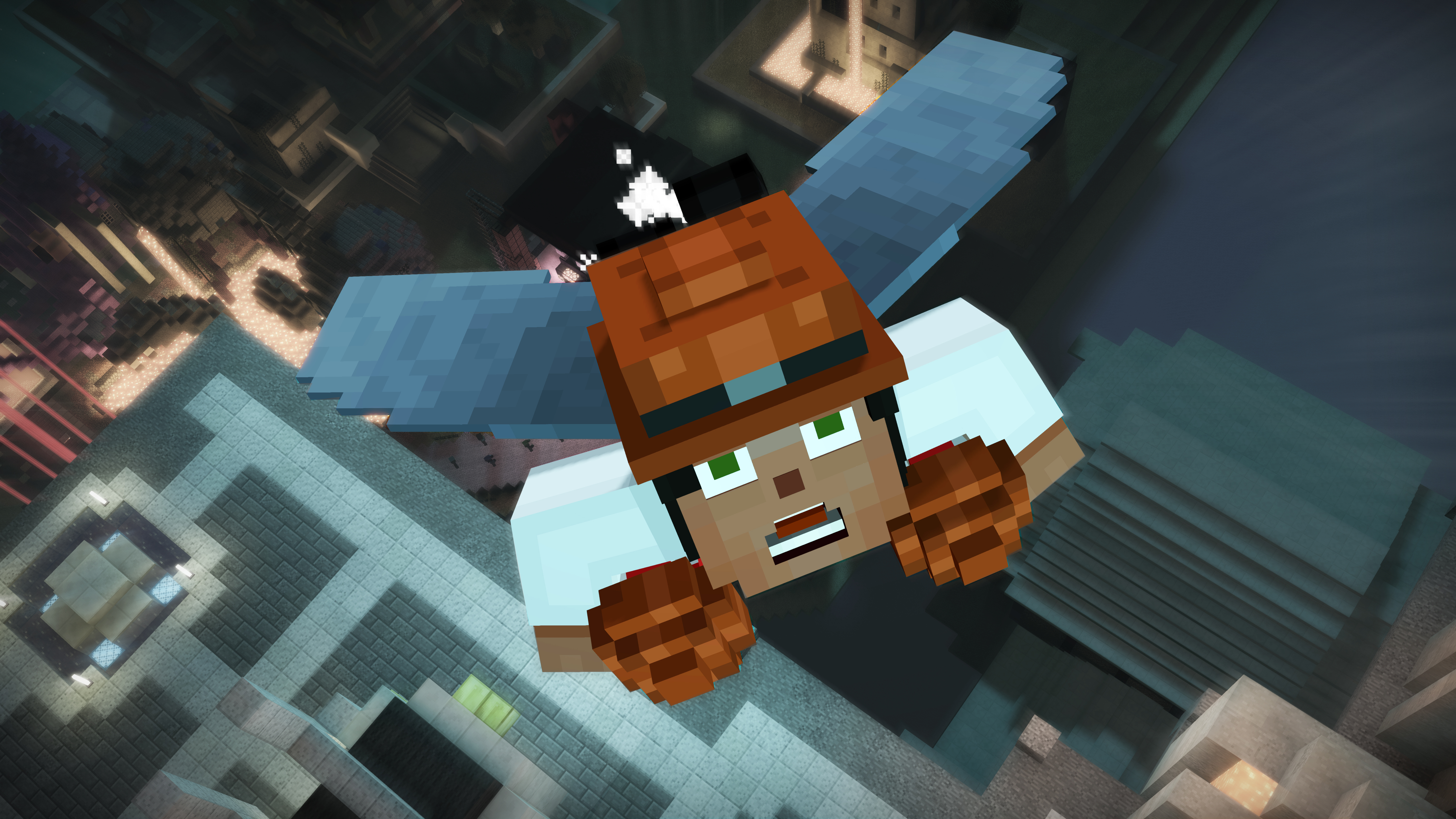 Again, I did not feel there were any agonising choices in this episode. Each of the story changing moments offered a logical choice based on how I had played the story with Jesse. However, I feel this was a strong point of the series. It shows that the narrative had on the whole been well-constructed so that very few choices felt forced or out of place.

One choice that could have been better handled though was the fate of The Admin. All through Episode 3: Jailhouse Block and Episode 4: Below the Bedrock, the idea that The Admin could redeem himself and go back to being Romeo was emphasised. However, early in this episode he commits an action (as Jesse) that for me suggested there was no way back for him. At the end, when he is finally defeated, he remains defiant before suddenly saying he deserves his fate. This turnaround was jarring rather than gradual, which would have worked much better to make the decisions regarding his fate tougher. Also, in the post-episode summary I was told I had ‘taken pity’ on The Admin when making my final choice. However, in my own mind, I was wary of another trick and was merely trying not to let him out of my sight, which did raise an element of conflict between Telltale’s narrative and my own.

Another character who lacked redemption was Stella. She remained an arrogant and annoying character at the end of the story, having seemingly learned nothing from the whole experience, and still bore a grudge towards Jesse despite suffering at the hands of The Admin as much as anyone else. This was a result of my choices during my interactions with her throughout the season, but it still felt out of place that she remained unchanged when everyone else in the story was reflecting on what they had been through and how it would shape their futures. 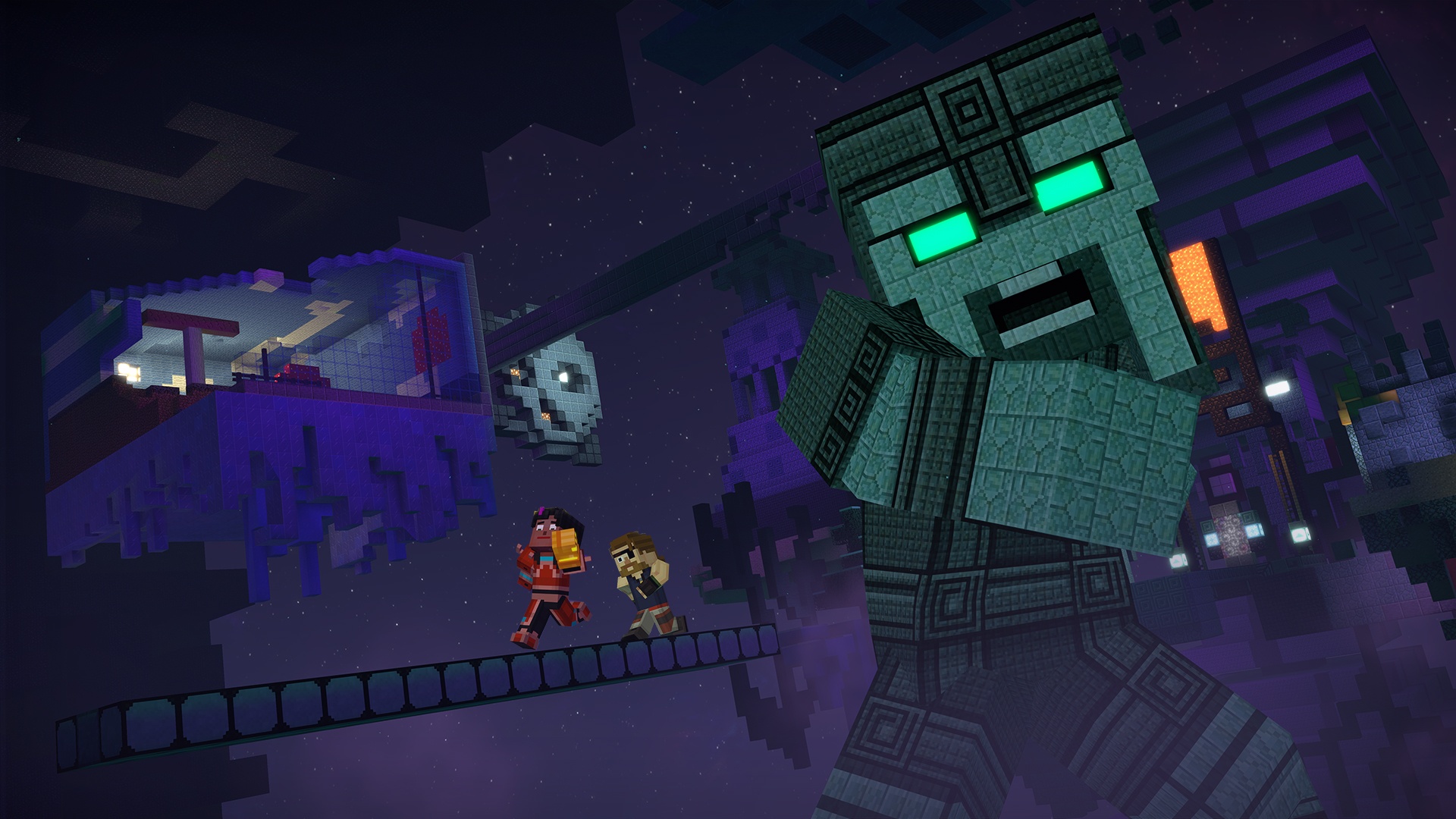 Having said that, this was overall an enjoyable episode. Jesse and Petra survived to tell another tale (which I am hopeful they will in Season Three!) Jack had one last great adventure and Radar got to establish the ‘Prison Radar’ side of himself. In their brief appearances, Ivor, Lukas, Olivia and Axel managed to address unresolved issues from Season One and make key decisions about their future.

With a stronger emphasis on the story, there was less need for puzzles, combat was saved for the final showdown with The Admin, and my favourite feature of building was not present. This episode also lasted longer than the others taking over two hours to complete. That meant my total playtime for the season was ten hours, an average of two hours per episode, which is fine when looking at the season as a whole.

This was a fitting conclusion to the season. Despite The Admin’s somewhat sudden realisation of the error of his ways at the end and Stella’s stubbornness (in my playthrough at least), the characters I cared about and the plot all reached a satisfying end point. The fact that I am now eagerly anticipating an announcement about a third season says it all about yet another quality offering from Telltale Games.