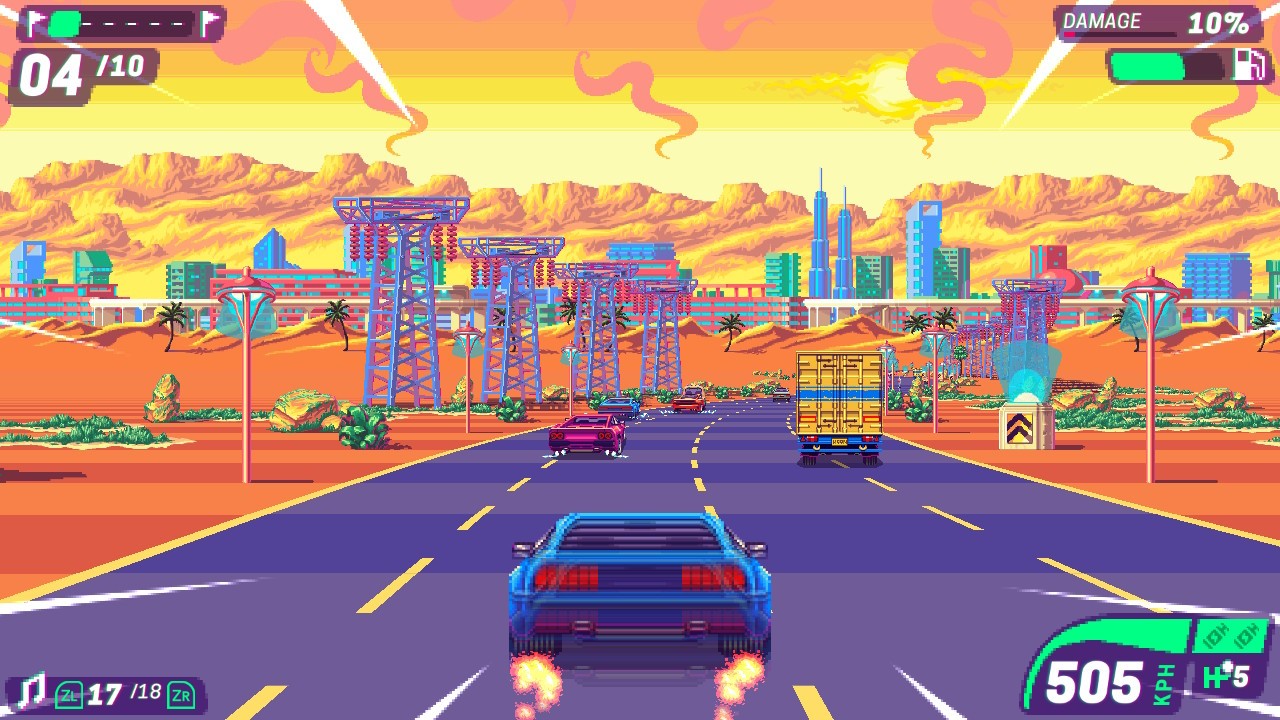 The onslaught of 80s nostalgia continues, and I’m still on the fence of whether I’m totally for it or not. On the one hand, we have some of the best soundtracks and inspired music coming out of artists that I’ve heard in a while: I am all about the different subgenres of synth and wave that have permeated Bandcamp. On the other hand, we’re also digging up stuff that really should have stayed buried in the 80s. Don’t let the new musical fool you, the original Valley Girl was a tepid and often terrible movie, even if it did have a young Nicolas Cage. 80s Overdrive tries to encapsulate all the visual and aural memories and feelings of the 80s in a single game, and, in many facets, they succeed: as a result, the wins are absolutely bodacious, but the shortcomings can be quite grody.

To its credit, 80s Overdrive wasn’t originally on the Nintendo Switch, so it’s not as though the developers are jumping on the retro bandwagon late: rather, their engaging and entertaining racer was released on the 3DS many moons ago. You wouldn’t guess that, however, from the way that it looks on the Nintendo Switch. There isn’t a hint of rough corners, bloated textures or any other telltale signs that it came from another, smaller screen first. Instead, you’re treated to the real deal of a racer from the very beginning with some helpful implementation of touchscreen controls, which do assist a bit in some of the game customization. Before we get into all that, let’s take a short look at the overview of this game itself.

80s Overdrive is a neon drenched homage to the racing games of yesteryear, particularly Outrun, a title that seems to endear itself to nearly every aspect of 80s game (look no further than 198X, which we reviewed back in January). With 80s Overdrive, you are a racer who’s trying to make a name for themselves along the underground race circuit that explores a landscape that feels very similar to the West Coast of the United States approximately 40 years ago. You take part in races along beautiful beach coasts, striking city skylines and sprawling natural reliefs, racing against other would-be righteous dudes and dudettes. The race courses, though, are just part of the normal roadways, which introduce the normal hazards: other drivers who are NOT racing, hairpin turns that aren’t meant to be taken at over 200 mph, and, naturally, the police, who tend to come down pretty hard on illegal driving. Your ride is pretty fast, especially when you bang out the occasional nitro, but the cops can and will keep pace with you and mess you up. 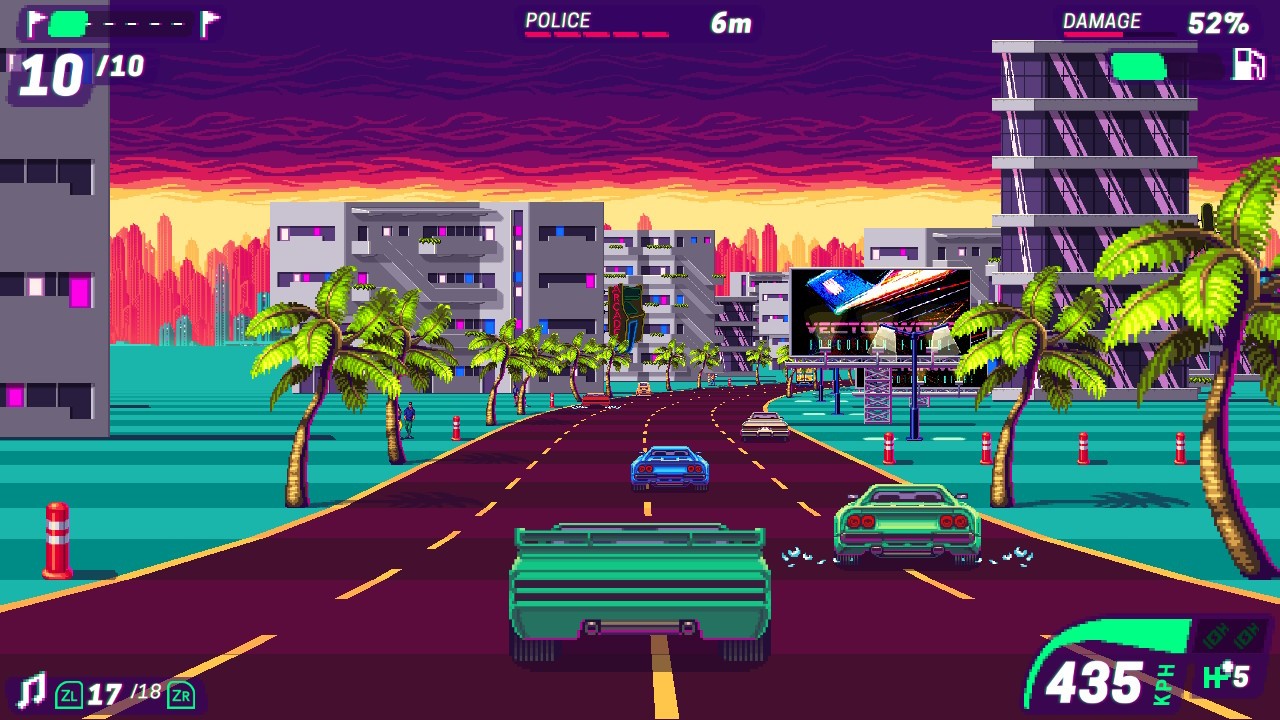 Let’s start at the top and move our way down. 80s Overdrive nails two things perfectly, which are the look and the sound. The striking, saturated palette of colors capture not only the games but the mentality of what West Coast 80s were like, and it delivers it without any faltering or muddling of the appeal. From start to finish, from long stretches of desert highways to the glinting underpasses outside of a major city, I was completely and utterly in love with the way that the game looked. There was nothing better than getting into first place and having a long, uninterrupted stretch of road ahead of you, burning down the lane at ludicrous speeds, rocketing towards an unknown future. This also happens a lot in the first third of the mission races as well: even the circuits that are dubbed “short” go on for quite a while, and you get to just shift into the highest gear and cruise. It’s lovely, and it combines so fantastically with the 80s inspired soundtrack. Incorporating 18 tracks from some well known synth and wave Gods like Vectorwolf, the player is able to enjoy the drive and shift between tracks using the ZL and ZR buttons, swapping tracks like you were ramming new cassettes in and out of your deck with reckless abandon. When it comes to presentation, there’s nothing better that 80s Overdrive delivers.

Getting into the actual game mechanics, 80s Overdrive offers players two different approaches: Career Mode and Time Attack. Time Attack is, in my opinion, exactly what players should get into as soon as they can. Besides eliminating the need to keep going further and further with the Career Mode, it has a great snapshot of what arcade style racing should be. Giving you the option to simply drop into the driver’s seat and do your beast in a be-all-end-all run, the simple approaches and ideas of 80s Overdrive work best here. You’ve got your gas and brake, you’ve got limited nitro to get a leg up, and you’re racing against the clock with the other competitors as a distant second in terms of importance. This is what I wanted the most out of the overall game, which is a true emulation of what a great racing game from the arcade heydays would have been like. You’ve only got one chance, one track, and you’ve gotta make it work. Though it can be frustrating when you get to more challenging and elevated courses, the Time Attack is the most sincere of the gameplay approaches.

When we delve into Career Mode, 80s Overdrive takes on a very polarizing station, one that makes playing swing wildly between enjoyable and aggressively upsetting. On the one hand, this is where the game explodes and takes on more meat, offering up the chance to buy new cars and modify the ones that you have. You find out the cash that you get from entering races is important to not only save up for that brand new Delorean-inspired ride, but for taking your current wheels and buffing up the bumper and the engine for better performance. After all, you can nickel and dime your way until the standard car is strong enough, but you’ll look and feel cooler if you save up the big prizes and buy something gorgeous. And the money comes fast enough: not only are there purses for the top three finishers, but you’ll occasionally be tasked with missions during the race, like picking up packages strewn along the highway. I enjoyed this element as it added something extra to the fun, and made the easier races a bit more complex, keeping you on your toes since you had only a split second of screen notice before the packages would appear. 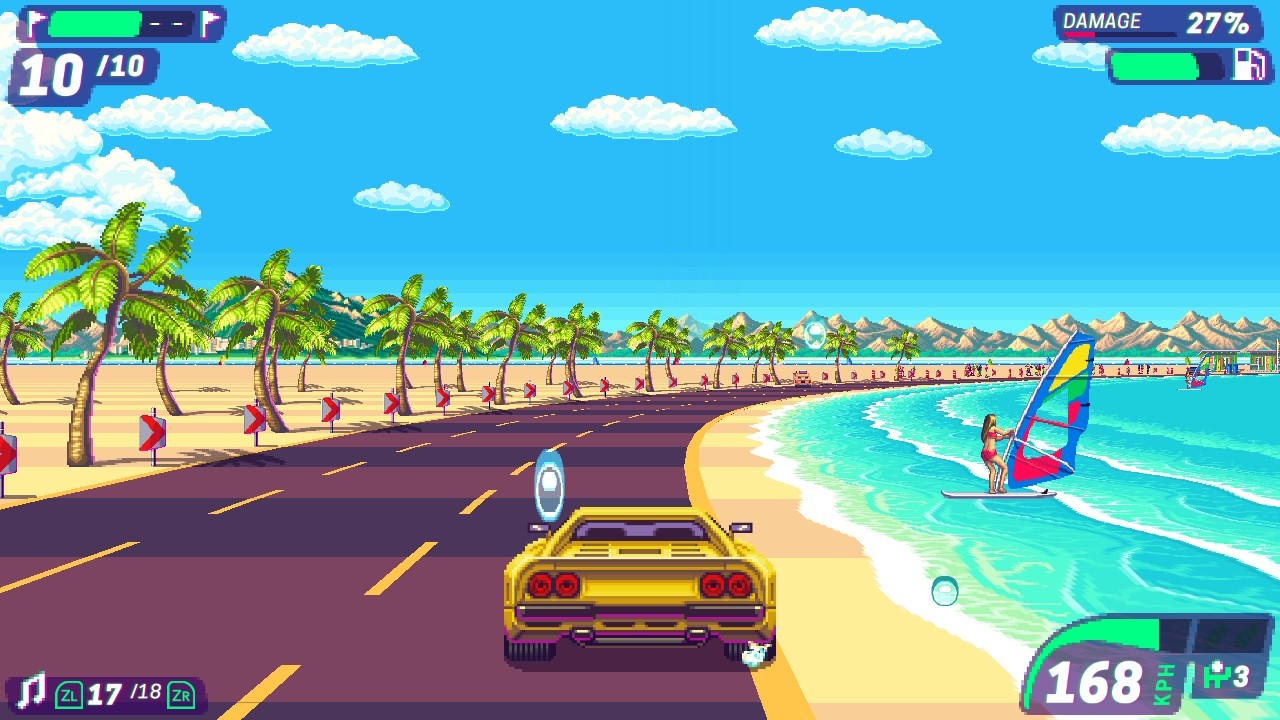 Now, on the other hand, the actual racing itself – the thing that is 99% of the game – is really tenuous. 80s Overdrive captures the gameplay of the arcade world in a better snapshot than modern racers (which are more conscious of things like physics and feedback), which is both good and bad. It’s great on the one hand for being a successful racer. That is, if you’re slick and you’ve got the game on lock, you can race ahead and just keep the pedal to the metal the whole freaking time. Most of the game I never even considered using the brakes, and the controls of the game were simple and tight enough that I rarely, if ever, let go of the gas. You can take sharp turns at over two hundred miles an hour without fear of spin out or dove tailing, and, as long as you stay on the blacktop, you’re golden. You got this, and you can usually recover from accidentally hitting some sand or running over a shrub with minimal care. Hell, the only real obstacle that’s immobile is if you hit a signpost anywhere, because those damn things are super corporeal. Like, more so than the other cars on the road, which brings us to the issues of the game.

80s Overdrive has the most insane rules for AI and how the player interacts with other vehicles on the road. Firstly, if you get hit by a car, any car, or hit any car, you slow down. A lot. But you don’t careen off into the distance or wobble or anything. Instead of looking like you hit something (because you have a damn car stuck in your bumper), you just slow right down like you got stuck in traffic. That’s what makes the police cars so annoying and ineffective: they race ahead to get in front of you and then slam on the brakes. If you hit them, you might get a fine and lose money, but that also counts on you actually hitting them, which is rare. What is far more likely is to hit one of the AI drivers who are either racers or just out on the road, because their logic for staying in their lane is insane and scattered. Other cars will swerve and jump up to three lanes at a time for no apparent reason and with no preamble. If you see another car on the road and it’s going in a straight line, be prepared for it to whip directly in front of you (or not) with zero warning whatsoever. It made for some truly annoying moments where I was doing great, and then the Winnebago up ahead decided to merge directly on top of me because why the hell not, and now I’m in 5th place and hate my life.

Having said all that, this isn’t Gran Turismo or Need for Speed, and it’s not trying to be. 80s Overdrive is trying to capture and emulate a very specific, very welcome spot in gaming history, and, in that regard, I think it’s a spectacular success. The look and feel of the game is banger, and the way the game handles is, weirdly, how developers of the time would have tried to make a game work. I still remember the number of collisions I got into in the original Spy Hunter because AI used to mean making the computer as violent and stupid as possible, so that came across well. It was a super enjoyable and fun ride, and I encourage almost everyone to take a trip down this colorful, gorgeous road and have the time of their lives.