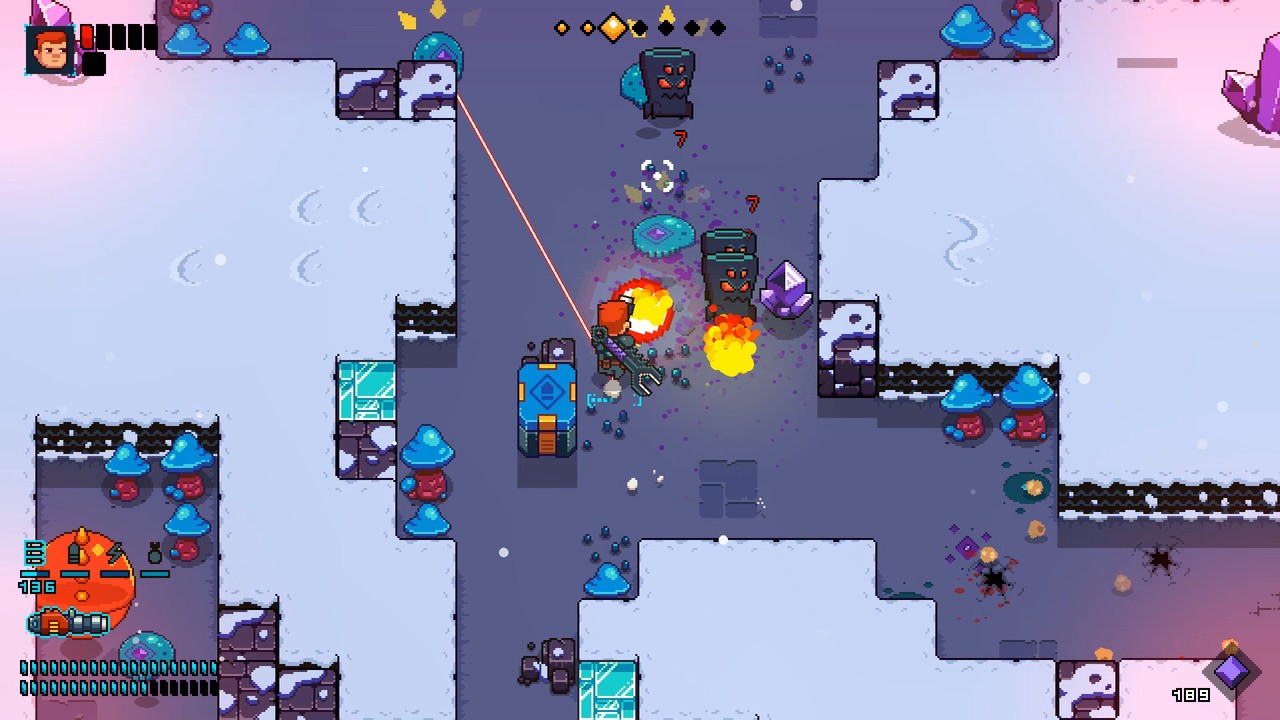 Space Robinson is very unabashed about the kind of game it’s trying to be. From the minds of Luxorix Games and published by Crytivo, Space Robinson wants to be the hardcore, twinstick roguelike to give fans of games like Nuclear Throne a bit more of what they had before, but in different flavours and with some different twists. There’s nothing wrong with that: I adore all the roguelikes that’ve showed up on the Nintendo Switch and genuinely try to play all of them (or at least all the ones that want to be reviewed). So this one shows up, makes its case and intentions known, and I figured that I’d give it a shot. The result? Not bad.

The setup is different, but hardly groundbreaking. You’re a space engineer, on his way to a conspicuously out of the way base called Colony 21, and aboard and even more conspicuously unstaffed space shuttle. So when your ship suffers critical malfunction and you crash land, you can hardly be surprised about what’s become of you and your situation. Initially armed with only a wrench (and quickly finding a spare gun on a dead former colonist), you need to fight through five different biomes – each with three stages and different bosses waiting – in order to make it out alive. Along the way, you’ll find different, special items that will help increase your odds of survival in the short and long run, giving it a distinct Relic Hunters vibe without being too on the nose. There’s crafting, there’s upgrading, and, best of all, there are bot pets, which you will NEED in order to survive.

As stated above, Space Robinson is a twinstick roguelike with a focus on melee, ranged and dash attacks. Your melee attack is your wrench and mostly stays the same throughout, although you can get different upgrades to make it better and more effective. Ranged attacks come in several different weapons, some of which use different ammunition slots, and go from your standard pistol to some really exciting and useful weapons. The auto-aim sniper rifle seems like it’ll be great, but only if you’re quick on your feet, whereas the ricochet gun can be great for clearing rooms as long as you’re aware of all the things it can and will hit. The dash is your necessary acrobatic manoeuvre for survival, asking you to dash in and out of danger, thread between enemies and sometimes thrusting you into bullet hell situations. The dash, also, can be affected by pickups, and the one that makes your dash bulletproof or the one that lets your dash do some damage are both incredibly effective. As you kill your way across the landscape, you’ll get EXP for your successful executions (which is then added to your character at the end of a run) and also crystals, which are used for power currency in both your main spawn base and the mini bases you encounter between the different areas. Choose how to spend it wisely: you’ll be investing crystals for quite a while before you get an overall result. 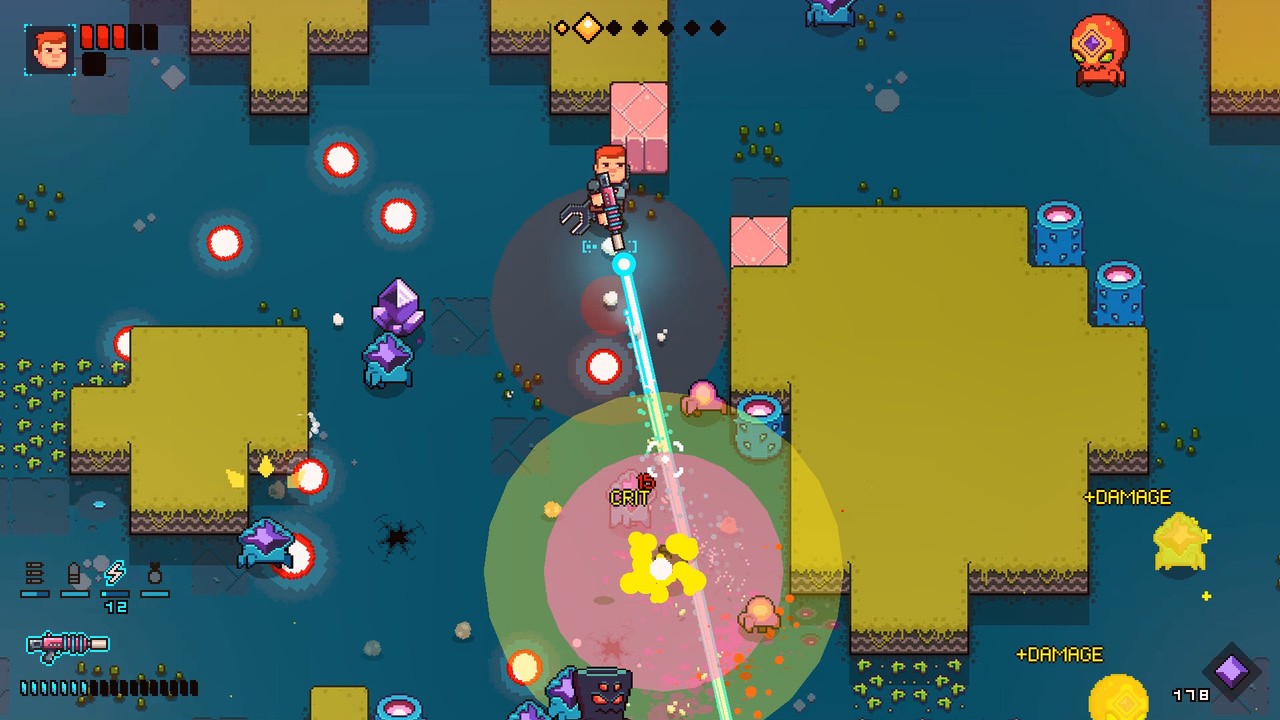 Space Robinson has some cool, original mechanics to it. First and foremost, the enemy variety is really quite great. From the drop, you have to figure out a lot about the different lethal fauna of your world, which includes enemies that dash you to death, enemies that shoot bullets, enemies that just run after you and want to bite, exploding enemies (which do friendly fire!), and so on and so forth. But there’s also the matter of nighttime, where things get really hairy. When the night comes (as it always does), your view range is limited to a small sphere of light around you, creating a brand new level of hazard. Additionally, there are several enemies that only come out at night, and tend to be more vicious and dangerous than daytime monsters. I got super complacent during my initial run through the game and cleared the Desert Plains with ease, then I got to the Tropical area (second biome) and was immediately consumed by the crystal jellyfish-like beasts that came out after dark. Don’t let your guard down for a frigging second.

For what it’s worth, Space Robinson has a solid approach to a great experience. The game runs incredibly smooth, which is essential in a title where waves of enemies do become a pivotal point: surviving an onslaught of creatures as night falls is anything but easy. You’re able to smash, shoot and dash with the best of them, and the game, naturally, helps the single player get the most out of the run. Using the shoulder buttons as the primary functions (shoot, smash, dash and heal packs) make the most amount of sense, allowing you to streamline your overall play. I wish there were an easier way to swap ranged weapons, however: I wasn’t a huge fan of needing to mash the X button in order to change to a different gun, but that’s because my mind told me that pushing a joystick button would have been easier. Ah well, it’s probably set up this way so that players don’t accidentally cycle in the middle of running around.

Additionally, the game has a solid curve of difficulty and character/chance improvement. If you’re looking merely to brute force your way ahead, it’s simple enough to dump all the perk points you get from levelling up into increasing damage and becoming a hulk. It makes getting through the initial stages easy enough and then sets you up for better artefact collection in subsequent runs. The artefacts were really interesting: each found artefact “repairs” a different section of the base which, in turn, affords either new passive buffs to your character (max HP up, for example) or unlocks the opportunity to invest crystals in adding weapons or gear to your personage before beginning a run. There wasn’t anything that really made the game more or less difficult, though the difficulty spray (which gives you the option for 2 additional HP or not) was a nice touch without overly neutering the game. 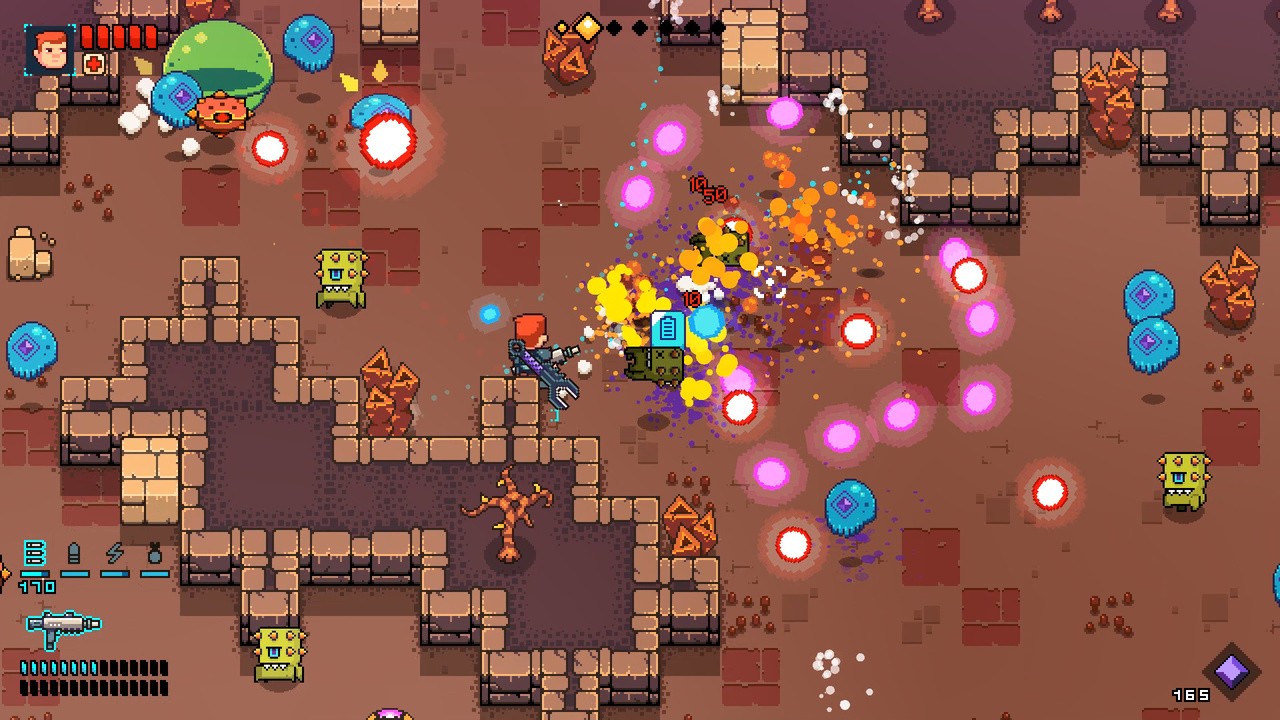 Space Robinson is one of those twinstick that, when everything lines up, you feel blessed by the RNG and have a positively banging time. I loved finding the equipment that made it so I could smack bullets out of the air with my wrench (and the little joke about me becoming the fifth turtle, good reference). Having the enemies explode wasn’t as useful as I had hoped, but it gave me a bit of cover damage while I dashed away from some wave overwhelm. The best equipment, bar none, is getting the little bot helpers that you’ll find occasionally. If you discover one of the equipment stations that pop up and you see an egg, get that egg every time. The space puppy is hilariously overpowered, doing great damage and holding the enemies in place with massive fangs while I shot the crap out of it from a distance. I call him Fluffy, and he is my favourite weapon.

The only crime Space Robinson has committed is being a sort of immemorial game, and I don’t quite know how to approach that. It’s fun, and it’s entertaining, and it’s certainly got a good price tag on it. The protagonist isn’t anything special, but it need not be. Robinson himself gets stronger and has more weapons, but it’s still the same dude after every run, and there’s no Co-op, online Leaderboards or things like that. Personally, I think it’s a great addition for people who like this style of game and need not commit to anything more than shooting and survival. It’s fun, and it’s worth the price of admission.

Space Robinson gives players an excellent outlet for twinstick, roguelite action without a hefty pricetag or a huge investment of time.