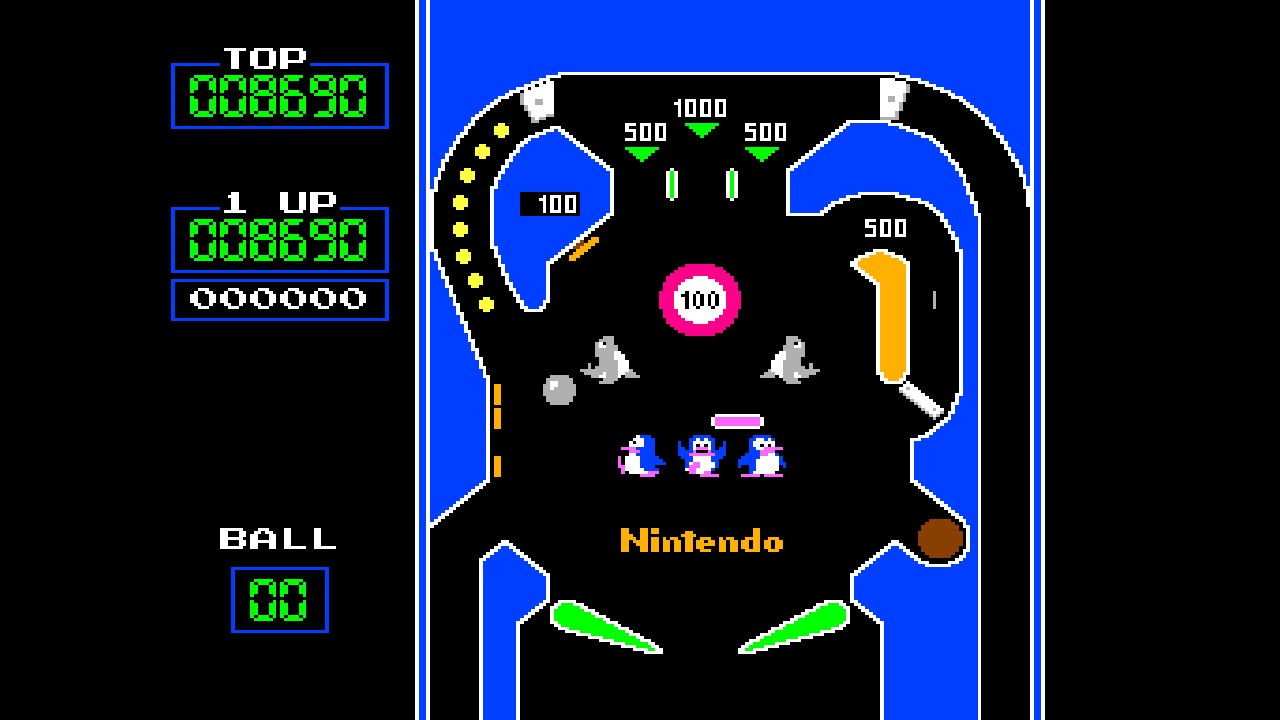 When we look back on the Arcade Archives, they do allow us a snapshot into the world of games in a time before many of us were able to waddle down to the local game center and waste our parents’ change. For me, pinball has always been a backbone of my gaming history, starting with things like the Playboy pinball machine (why that was at the laundromat, I’ll never know) and culminating with all the amazing digital tables we’ve seen from Zen and Stern in just the last few years. I haven’t gone out of my way to find more pinball recently, but, when the simply titled Pinball came across the desk, I knew I had to give it a go. Not only as a testament to what the interpretation of what virtual pinballs could have been, but also because I played the hell out of the NES version decades ago and I wanted to see if the original arcade flavor compared.

Originally published by Nintendo in 1984, Pinball is exactly what it says it is: a two level pinball machine, with the objective being exactly what pinball always is. Keep the ball bouncing around, hit a ton of targets, make the magic happen and get a high score. There is no subtext whatsoever in this game interpretation of pinball, nothing like what we saw later on with Jurassic Park, Star Wars and Archer inspired tables. The plunger will thrust your ball into the upper register, where you have a set of flippers to try and keep the ball moving amongst the bumpers, slots and targets that appear there. If you miss and drop, you can still keep playing on the lower register, which arguably has more things to try and hit, and falling here means losing a ball. There’s nothing about the idea that needs to be really explained unless you’ve literally never seen a pinball machine before, in which case I’m honored but perplexed that you came to my review to try and spell the concept out for you. Once you get everything going, you can really smash targets, flip cards and get some good pointage to keep the game going. 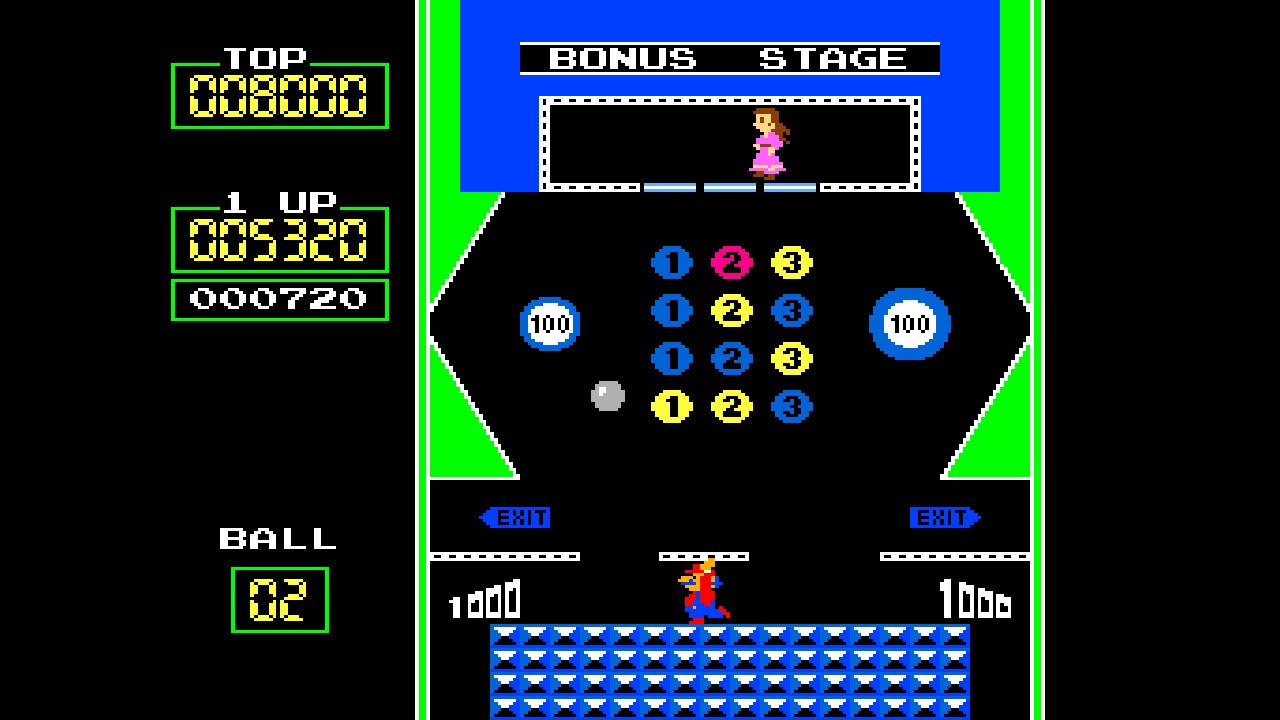 Like everything that Nintendo does, Arcade Archives Pinball succeeds because Nintendo manages to inject a little bit of extra magic into the performance. Far from trying to go too crazy with extra elements or details, it’s the little things that make the game work. When you move about the table, there’s some animation that happens with the different parts of the game, from animals to objects. Watch the seals move about, slightly, as you flipper past them. See the eggs hatch from striking them with your ball and observe the happy little chick pop out. Even get excited when you realize you’re only two cards away from scoring a royal flush on the lower register, and, though you won’t “win” with this hand, you’re positive that something good is about to happen. What made sure Nintendo lived through the Video Game Crash is that they knew how to hook their audience and keep them entertained. Don’t go big: go small and make it memorable.

That’s probably the core that keeps Pinball warm in the hearts and minds of many players. When the penguins are frantically looking from side to side to try and keep an eye on the ball, I begin to smile. It’s something that’s not infantile, but it is earnest in its simplicity and relaxing motion. A pinball game isn’t terribly difficult to emulate, but it is hard to make one where you aren’t stressed out. Modern takes mean that you have to worry about ball physics and tilt factors and trying to line up amazing shots while thinking about the potential cross targets and if it’s a Thursday or if you’re wearing blue socks. None of that exists here, and the biggest advantage to it all versus the NES version is that this just looks better. The graphics are more saturated, the pop is a bit more flamboyant, but there’s no additional crux of gameplay that you need to think about. In a fantastic move, this is identical to the home version that Nintendo also published, but you just see the game a bit better. Oh, and you can turn your Switch vertically if you simply must, but I don’t really recommend it because it screws up the minigame. 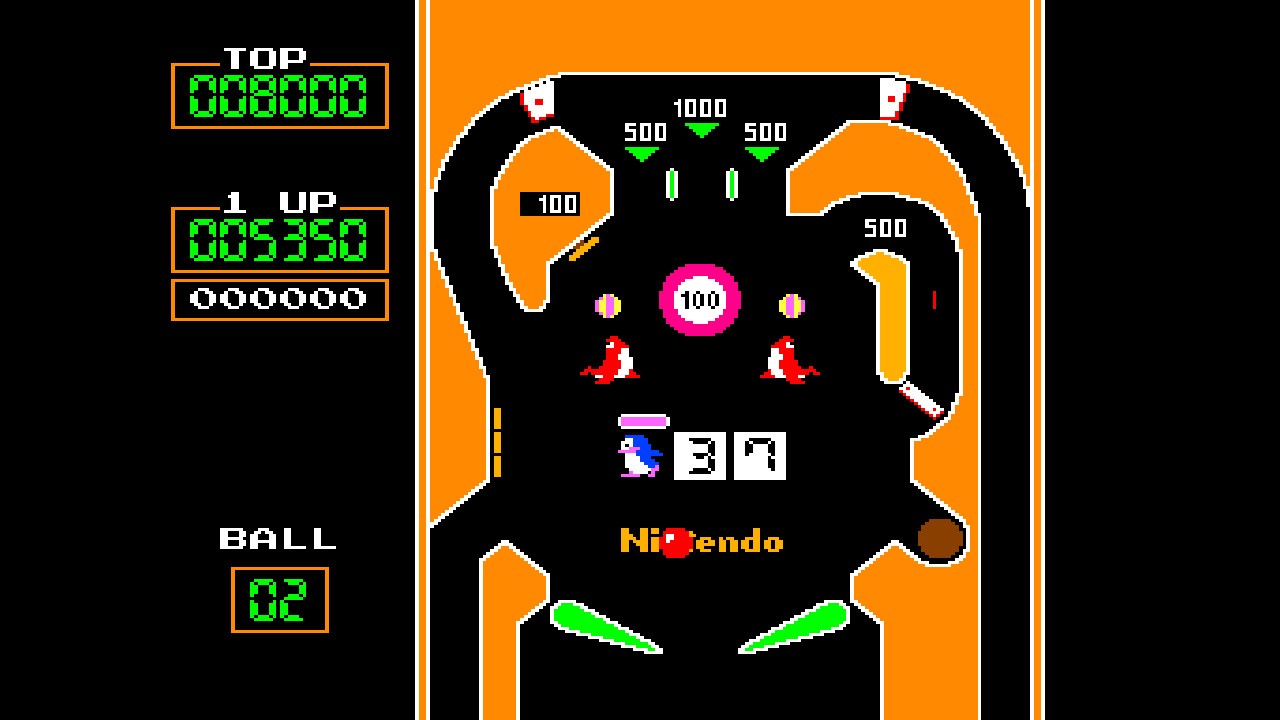 Right, the minigame. If you’re a good shot, you might activate a Wrecking Crew inspired minigame in Pinball that can net you serious points. This game, which plays like a slow, dumpy version of Arkanoid, is a nice easter egg and provides some reminder about the Nintendo element of the game. You bounce a ball off a girder Mario has while hitting a bunch of numerical targets and bumpers, and Paulette just runs around up top without a care in the world. It’s such a non-game that it almost doesn’t register for you to try and get over there, but it’s a good bonus and at least shows some versatility beyond the different ways the tables look as you progress and get higher and higher points. Remember, this is an arcade game: your play can be done in three minutes or thirty, depending on your patience.

I know it might seem hypocritical for me to pan Legend of Kage while praising Pinball, especially when my umbrage with Kage (lack of versatility) is one of the reasons I like Pinball. But here’s the thing: it’s a damn pinball game. It screams the word Pinball on the front, and when you load it up, lo and behold, it’s pinball. It’s old school fun, it’s simple, and it definitely is better than trying to work a pinball interpretation on my smartphone. It’s nowhere near as great as the modern tables that we can get with the DLC distributors mentioned above, but I will say it’s a bit better than some of the bizarre standalone tables we’ve gotten in other incarnations. I say go for it, if only to prove that you don’t need the best technology ever to have a great time.

While simple and repetitive, there’s a charm about the original Nintendo Pinball that makes it oddly compelling.