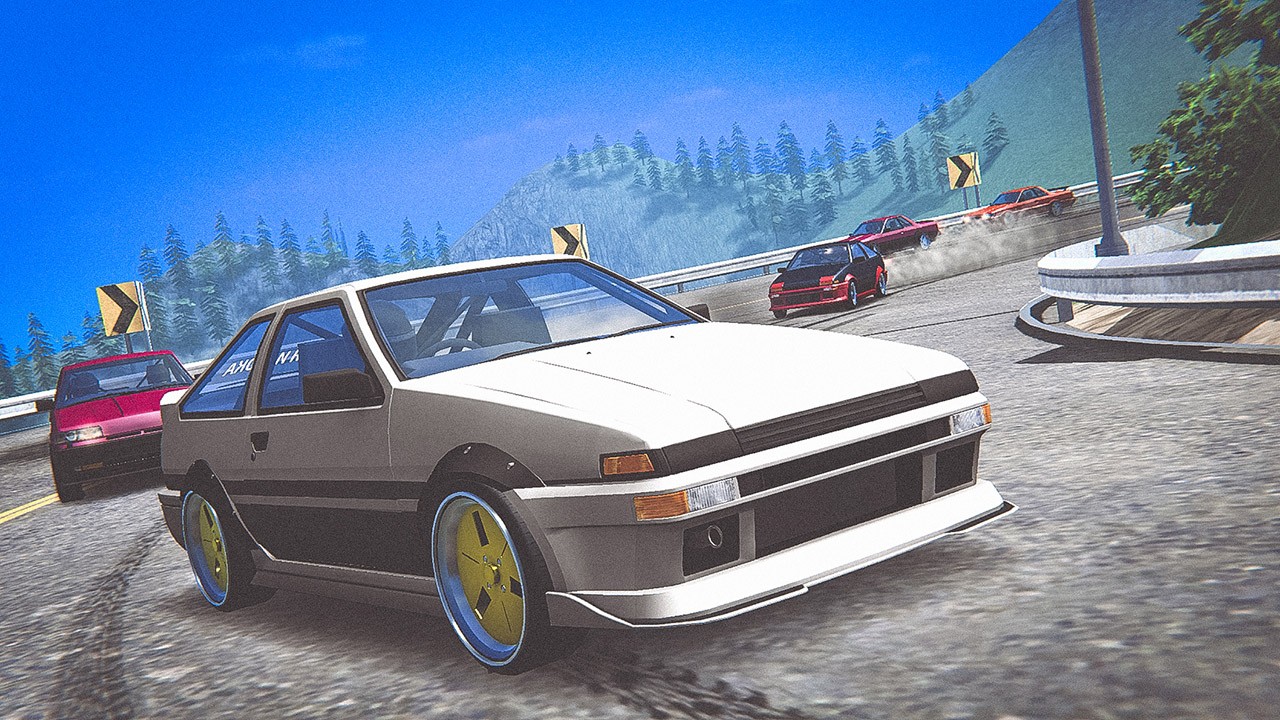 What started as a lonesome quest to find a decent driving game on the Nintendo Switch, rapidly materialised into a very productive one with said driving games preventing me from opening the front door due to the flood of titles. True story. That means there’s no going out for the week once again. No matter, I have JDM Racing to review.

I don’t mean to be so viciously cruel, but JDM Racing isn’t the best title. It reminds me of a company that does infomercials or a public domain game you could get on a cover disk (spelt correctly) back in the day when magazines used to provide them. As the saying goes; don’t judge a Switch game by its title, let’s instead look at what it has to offer us driving fans.

The first thing that strikes me is the choice of cars. There aren’t any Skylines or Supras, instead versions of some classic not-so-popular-but-sporty-nonetheless vehicles. The flagship car appears to be a variation of the Toyota Sprinter Trueno. Fans of the manga, anime and games Initial D might be familiar with this. So far, so very cool. Of course, there are other cars available, but you need to progress through the stages to unlock them as they aren’t immediately available.

What’s on offer then? There’s a career mode, training to bolster your skills (though it’s not needed) and daily events which are perfect for earning credits to spend on your vehicle of choice or unlock a new one. In addition to these modes, there’s also a garage that houses your prized autos, tuning and upgrades.

With the tuning side of things, you can install new bodyparts and customise them with an excellent selection of colours and variations of hues. It doesn’t have anything to do with performance, just appearance. Fine by me – I want to drive the most pimp looking car, even if I’m getting lapped. 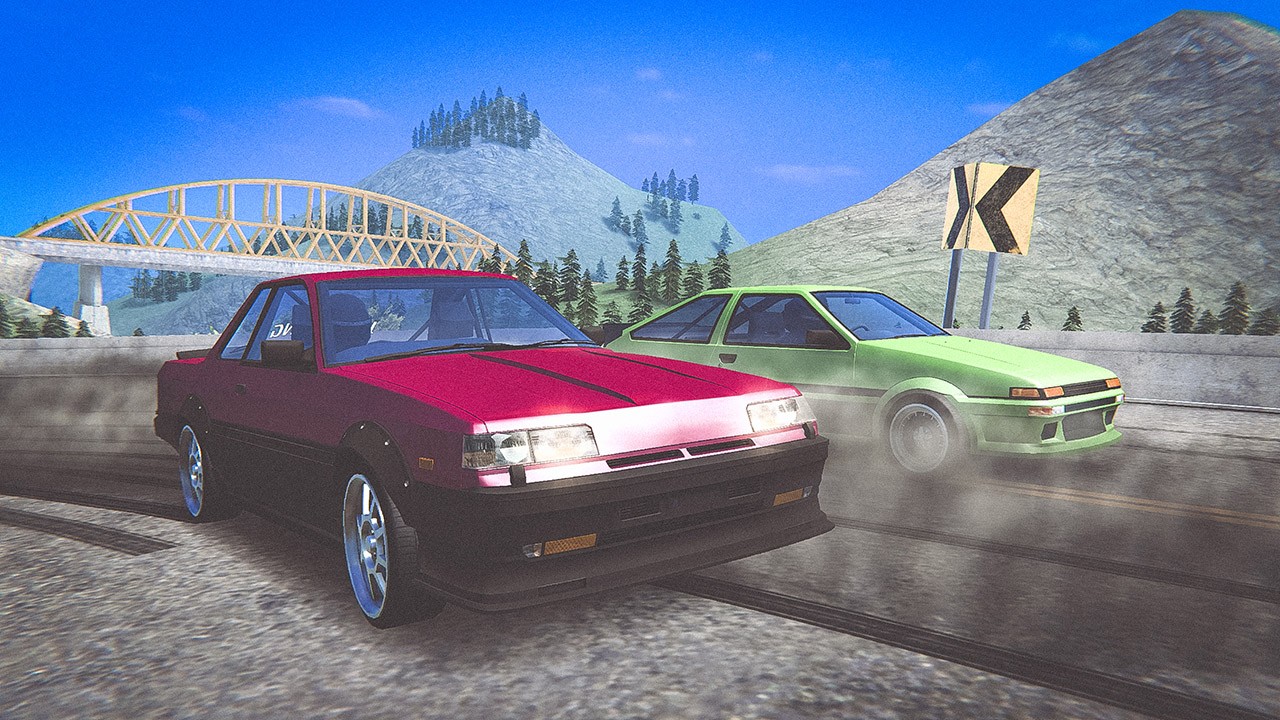 Upgrades are the standard affair; nitro, turbos, intercoolers, intake and exhaust parts. As you upgrade, you’ll see the specifications improve as well as a legend that displays the transmission, suspension and body weight where you can attribute bonus stats too. My advice is to go for top speed at the earliest opportunity as the cars are pretty slow. It doesn’t get overly technical and handles as an arcade game should. You install a part, make it pretty and drive.

The career mode is of a reasonable size with varying levels of difficulty, but I will say that it’s a bit of a challenge in the opening stages as the cars are quite sluggish and all the other cars seem to match your speed at first. There’s a variety of tracks and pretty early on you will get stuck into the drifting side of things, and it’s quite enjoyable. So let’s briefly look at the daily events.

Daily events stem from checkpoints, drag racing (ooer) and standard racing. These are good ways to earn credits which you can apply to the improvements you can make to your car. The checkpoints mode is available from the start, but you need to unlock the other modes. Regrettably, I had to stick with the drag racing section to see it through, but I’m not particularly a fan of driving in mostly straight lines. There are restrictions on some of these challenges though so you need the appropriate class. Back to the career mode then.

A vital part of driving games is the controls, so they need to work. Pick up any FPS, and you know the left shoulder buttons will be set for zoom, the left for shooting. With a driving game, the left is for the brake, right for acceleration. In some cases, the shoulder buttons change the view, and A or B is accelerate. In JDM Racing the shoulder buttons are redundant; accelerate is X, the brake is B and A for the handbrake. This isn’t natural at all for me, and I was not too fond of it. Apparently, you can change these settings, but pressing + or – to bring up the pause screen didn’t appear to give me the option. If there is an obvious way to do it, I now publicly look like a numpty. Oh well. 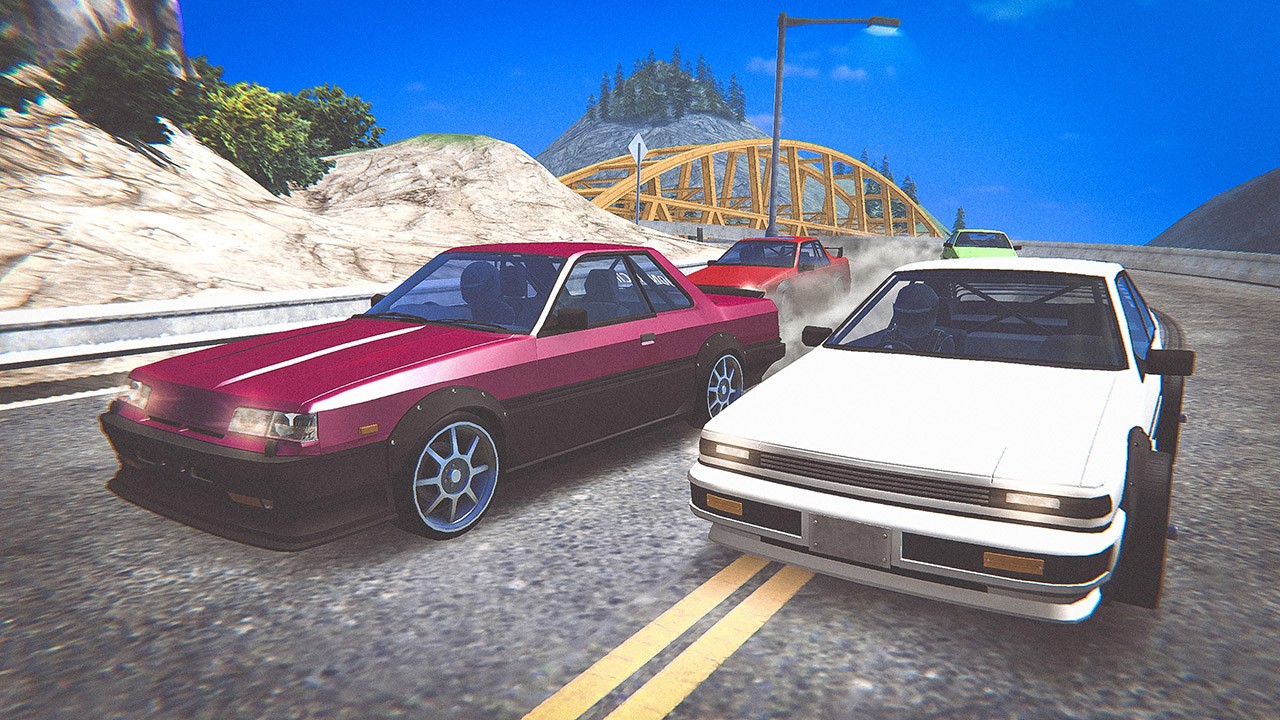 Collision detection is ok, though if you have an AI vehicle clip you, everything seems like slow motion and the cars have the manoeuvrability of an oil tanker. There were a few levels where I would take a corner only to be clipped by another vehicle. While I aimed to get momentum, the other AI vehicle sped past. And forget about the nitro, I held a full tank down on numerous occasions, and the other car met my speed. The nitro effect is also odd. The corners of the screen move in a lightspeed effect but the focal point, in this case, the car and the track, maintain the same speed. It’s like a scene from Spaceballs as it didn’t feel fast at all.

The graphics are pretty good but unexciting. You can’t change the view other than when you start or slow down the camera zooms in. Instead, it’s fixed as a third-person perspective. Unfortunately, the sound effects are dire. The music is ok, but it wasn’t representative of the gameplay in the early stages as I expected to be overtaken by a mobility scooter at any moment. I switched off the music, but it didn’t take too long for me to put it on again. The car engines sound like my wife’s hairdryer. I’ve been in one of these cars, and they don’t sound like that. It reminded me of when I first played Drive Club – an enjoyable game but sustained tyre screeching.

Other than the customisations, it’s not looking good for JDM Racing, is it? Well, let me throw you a quick curveball. The handling of the cars is excellent. While you have a handbrake to assist with the odd hairpin or hefty turn, a lot of the time you can get away with it with a calculated drift. The drifts here are some of the best I’ve experienced in terms of accessibility. You needn’t release the accelerator, apply the brakes, turn into the corner and re-apply the acceleration – you just come off the gas and turn. It’s not remotely difficult to perform and dare I say, makes you look quite skilful to some degree.

Despite being a fan of Japanese sports cars and driving games in general, I didn’t go into JDM Racing with any expectations. The ease of being able to go in and out of a drift is one of the best I’ve experienced, and the cars handle pretty well. I was a bit underwhelmed with JDM Racing however as it feels in some ways that it should have stayed on a mobile as it doesn’t seem to take advantage of the power of the Switch.

There’s something about it that feels unfinished like it needs more vehicles, improved sound effects and a few more tracks to play on. If I played this on my mobile, I would be quite impressed, but believe there could have been a few more tweaks to make this worth having in your Switch library. A multiplayer mode would be a bonus but not necessarily a deal-breaker, the controls could be better (unless I’m of course missing something!), the addition of at least two more views, i.e. in-car perspective and for the game to feel a little more lively – to match the soundtrack.

JDM Racing is a good title for Japanese sports car fans and for those who like to pimp up their vehicles, but the lack of energy – rather, the urgency of the races, doesn’t quite live up to the sporty models’ legacies. If I’m driving a fast car, I want it to feel like a fast car.

Unless I missed something, the controls can’t be re-mapped and awkward by default
Poor sound effects
Restricted to only one viewpoint