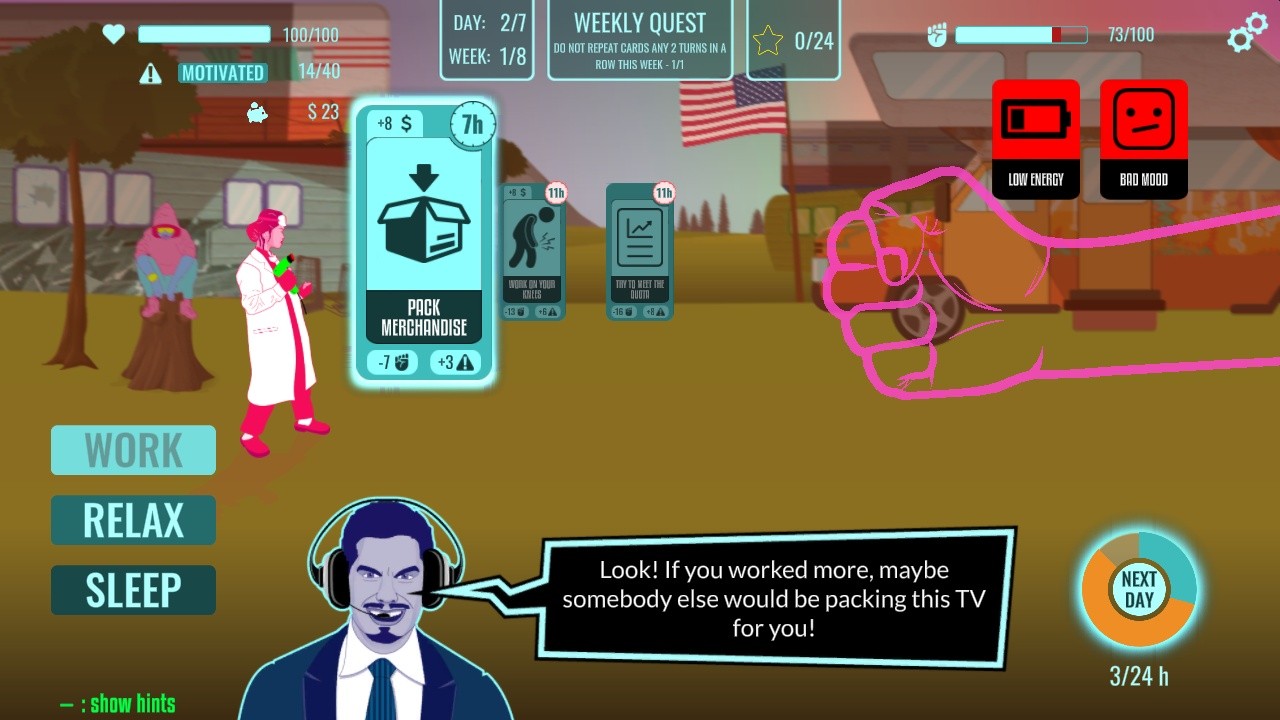 My idea of a card game would either be Uno or Cards Against Humanity. I’m not one for poker, completely skipped over the Gwent card game from Witcher 3 at any opportunity and discreetly would exit the room should someone start a conversation about Magic the Gathering. I’m not knocking any of them; they aren’t for me. So when I saw Invisible Fist, I thought I’d step out of my comfort zone and give it a go.

I’m not 100% certain who this game is for. The controls are super simple, and you can get into the game almost immediately, so that appeals to the casual and mobile gamer. There’s plenty of dialogue and a premise of sorts that weaves in and out of gameplay. It’s a satirical piece too, with razor-sharp wit throughout. It’s the latter that puts this into a niche more than the turn-based card RPG element, so that’s saying something.

The concept is a unique one; the free market and late capitalism. One would assume this type of game could be categorised as a free-to-play PC simulation with heaps of menu systems, zero animation and those with a strong stomach for economics. Wrong. Invisible Fist is very easy to pick up and get straight into in terms of gameplay; it’s just whether you have the patience or interest to stick with it. Visually, it’s well presented and the animations are good for the type of game. Backgrounds are a little limited, but perfectly fine. As a text-led game, there isn’t any voice attacking nor sound effects worth mentioning.

In total there are three story arcs, associated with the three playable characters. At the start, you’re stuck with an incredibly unlikeable start-up CEO, who no doubt ends everything with ‘bro’ and has a certain self-entitlement. I could be straying towards having a moan about Millenials as a boomer who says “When I was a youth…”, but the protagonists are their own worst enemy, and I was didn’t care about their predicaments. Each of the characters in Invisible Fist has their goal. Jeff Whizz is a tech start-up on the verge of releasing the AI of a generation, helping Millenials with their mother issues (that’s the intentions, not my opinion!). Rena is a self-made student (we just said mature when I was at uni) who, like all students, has crippling debt. Finally, Diàn, an electronics worker, somewhat isolated away from her long-distance relationship and her family. I’ll admit, I didn’t experience her story as I was unable to unlock the stars required. 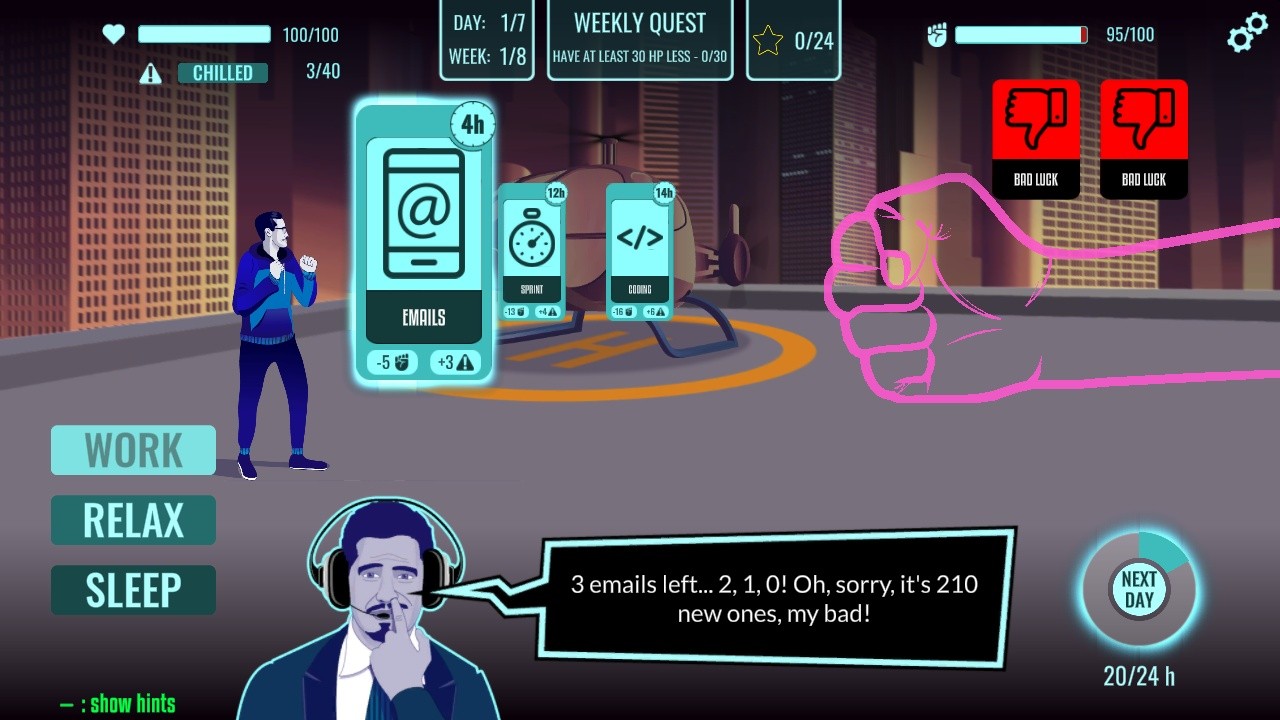 With the goals in mind, you take to the stage to battle the supposed free hand of capitalism. Instead of a game of stone, scissors, paper, you hurl cards at each other to inflict damage, heal yourself and apply buffs in the form special cards. The main card is Work, and this is used to apply the damage. Your deck is a plethora of buzzwords and daily events that mostly happen in the workplace. For example, a card entitled ‘New Product’ will do five damage points to the hand, but will add 2 to your stress levels. Get overly stressed and your performance drops, lose your health, and it’s game over and back to the beginning.

You’re awarded 100 health points, the same as the Invisible Fist, and up to 40 points for your stress levels. Aside from the cards you use that increase your stress levels, the Invisible Fist can also debuff you with increments to your anxiety. But the bottom line is, your health is vital. To restore your health, you can use cards from either your Relax deck or Sleep deck. Some can renew health, where others drop your stress levels. You’d be forgiven for thinking you could fire out all the cards willy nilly, but each card has a time value. As there are 24 hours in a day (fact!), you can only use cards that total 24 or under. Once you hit that, you need to end your turn, thus obtaining a new deck. So, there’s your strategy!

Other than the three main decks, there is also a Special deck that gives bespoke buffs that give you more hit points for five turns or reduces the cost of a card on your next turn. These aren’t handed out; you have the chance of getting them through a side quest mid-round. Side quests are relative to the character, so with Jeff, who I played the most, battles are intercut with some dialogue between him, his mother and the AI he is looking to release.

Each bit of dialogue gives you an option to respond. The first option will unlock a random special card that you can use on the next day. In contrast, you can skip that and get 20 extra health. As you don’t regenerate your health after one of the main battles, I found myself opting for the additional health so I could last a little longer, get more stars and hopefully, just hopefully, unlock a new character. Ideally, who is more likeable. Speaking of dialogue, I can’t not mention the commentator at the bottom of the screen who has a response for everything. He’ll give you in-game feedback on your performance, but there is also a connection with the underlying story as he’ll often refer to your employees (Jeff) or debt (Rena), almost like an over-cocky advisor. Invisible Fist is text-based so you can choose to ignore it, but the best lines are from him. It’s just a little too much at times. 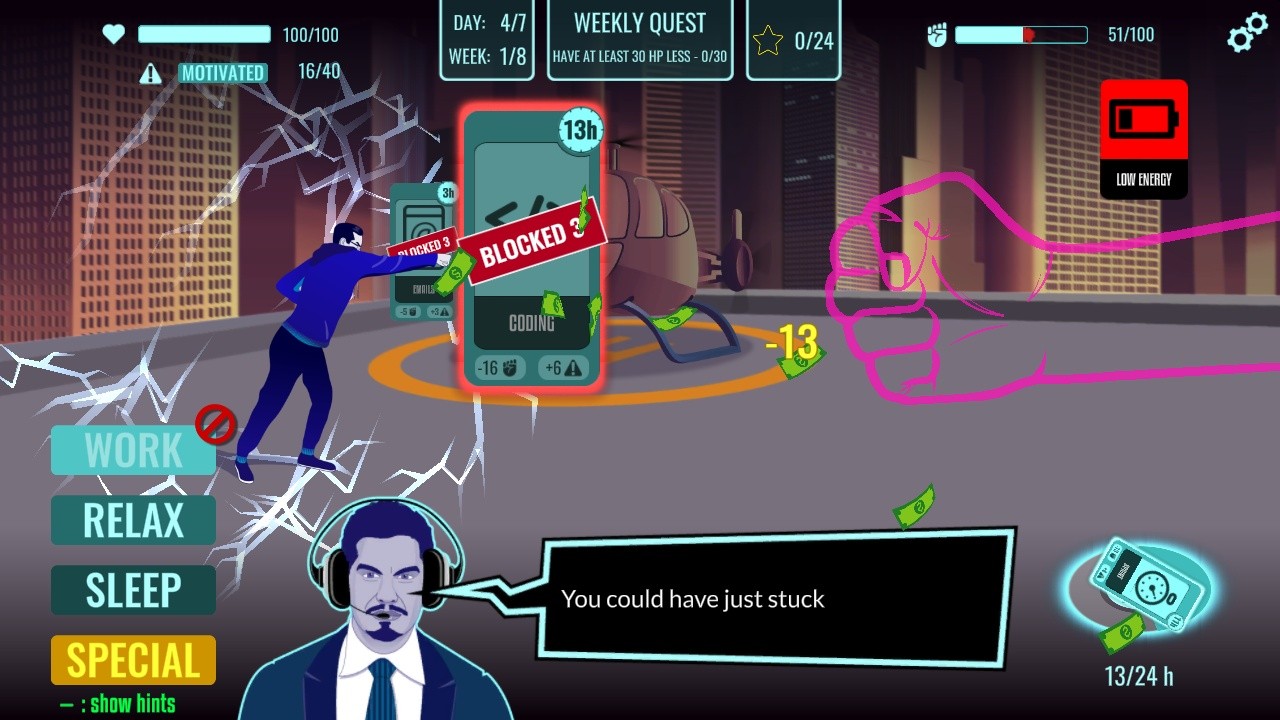 To unlock the other characters, you need to obtain stars. In the first case, you need 20 stars so that you can play the student character, Rena. Stars are won through three simple categories: whether you survive, beat your opponent and/or complete the daily challenge. The first two are self-explanatory, but the daily challenge is very hit and miss. Understanding what you need to do to complete the challenge is easy such winning the battle in a few moves, or not using the same cards within 48 hours. It’s the execution that’s the issue.

As a turn-based game, Invisible Fist can be time-consuming, and you have to calculate whether your attacks (and healing) will be sufficient enough to see you through. I’m sure there are some number crunchers out there that will ace this game, but for me, I got to the stage when I wanted to unlock a new character and ended up spamming the attacks. I know that’s not great, but that’s where I got to with the unlockables as there’s no indication of how many stars you currently hold and it didn’t seem that you could accumulate them after multiple plays. By the time I had unlocked the second character, I didn’t feel motivated enough to unlock the third.

I had mixed feelings on Invisible Fist. On one side, it was incredibly witty and excellent social commentary that didn’t take itself too seriously. However, the polar opposite with these feelings was that it was pretentious, too overly aware and started to get old quite quickly. In some respects, it might be a generation thing also.

Without a doubt, Invisible Fist is a very bespoke title, but as I said at the start, I’m not clear who the intended market it. If I make assumptions, I’ll probably come off as patronising as the dialogue can be. That said, the exchanges are the Marmite of it all – it’s sharp and direct, but quite obnoxious and incessant. The controls are easy, and despite being a turn-based card game, it’s readily accessible and that what makes it have a bit more durability. From my stance, there’s nothing worse than having to play a 20 minutes tutorial followed by umpteen different tooltips on how to navigate the menus. Even the intro to the game is separate, and you don’t need to watch it. But why wouldn’t you? It’s a great setup piece on what to expect with the game. You’ll also get a feel if this is the sort of game you want to play.

High five, fist bump or a wave goodbye? The Invisible Fist and capitalism isn’t usually a subject covered on the Switch, but, here we are…