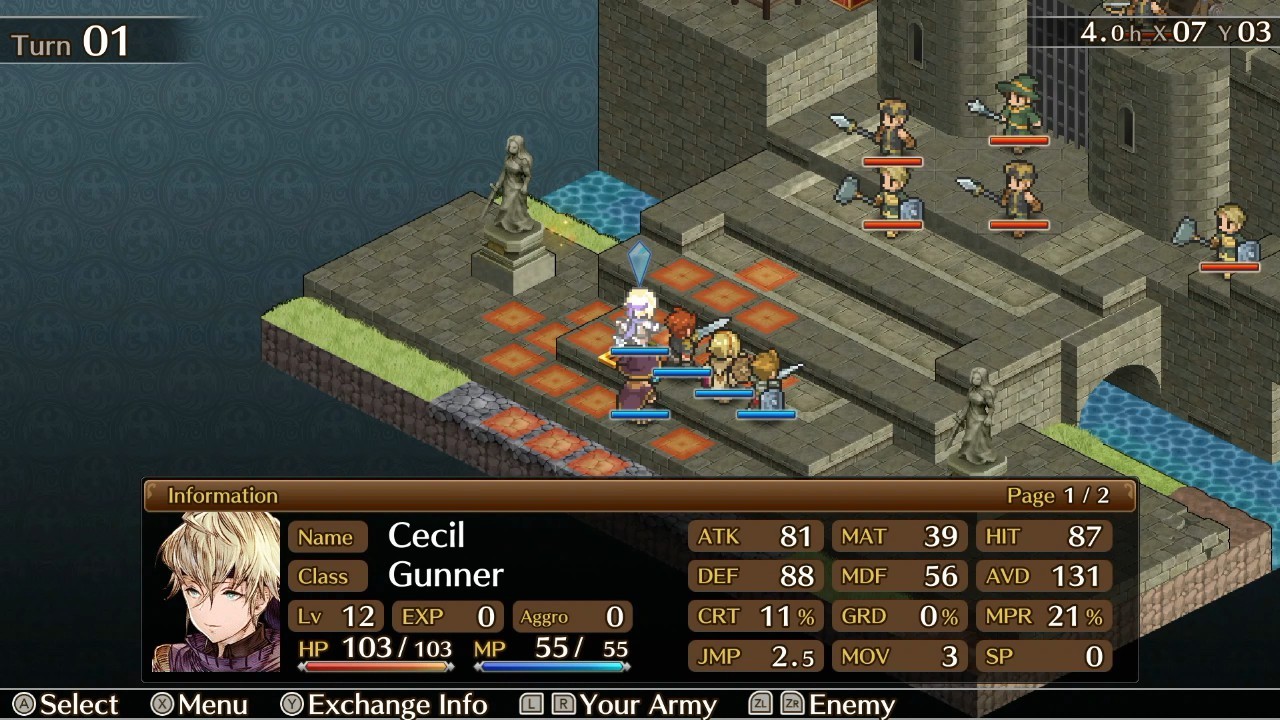 When it comes to turn based strategy games, there are a variety of options already available on the Nintendo Switch. From the pinnacle of in-depth (Fire Emblem) to the bizarre but fantastic (Mario vs. Rabbids) and everything inbetween, there’s been no shortage of these sorts of titles. I had a fantastic time with Mutant Year Zero a short while back, Disgaea was one of my first and favorites on the Switch, and I haven’t forgotten the Banner Saga, not by a long shot. So when another game is added to the roster and needs to prove its mettle, it can be a daunting task. Sadly, unlike the mythical animal in the game’s title, Mercenaries Wings: The False Phoenix never really rises from the ashes, or even takes off in general.

To start with, you’ve got a pretty generic setting and plotline that feels like someone watched Final Fantasy Tactics and then tried to make their own take on things. Then you realize that Mercenaries Wings is a tangential sequel to the Mercenaries Saga Chronicles, and it all suddenly makes sense. You play as Cecil and Jeremy, a sister and brother team who lead an ever growing group of rag-tag mercenaries, and you’re trying to make a buck helping out the kingdom of Dryden, which is in the midst of a war and has a problem with shrinking army ranks. You get involved because, hey, you’re a mercenary, and the king seems like a good dude. Then, within about three chapters, you start to suspect there’s more than meets the eye in this world of warfare and political intrigue, and, big surprise, turns out there’s turmoil and deceit and nothing is as it seems. The story is honestly pretty forgettable, and most people will just want to skip through the exposition that talks about how the guy who says he’s helping you but seems suspicious is actually a bad guy. We know where this is going, we’re here for the mechanics and the strategy therein. After a certain point, you are able to choose the way the story unfolds, opting for one fork or another, so the replay value does exist if you want to see where the mercenaries may end up if they align with the other faction.

From the get-go, you realize this isn’t going to be nearly as complex as some of the titles I listed at the beginning of this review. You place your characters on the grid map as you begin, and then you take turns against the enemy moving into place, hitting them, using items and skills to rebalance the combat, and continue until the conditions for the mission (usually “defeat all enemies”) is satisfied. There are only two difficulty settings: normal and easy. Easy is crazy easy and almost makes the game relaxing to the point of indifference. Normal at least keeps the game a bit in check in terms of difficulty and one of the biggest breakers I’ve seen in a strategy game: mid round level healing. If you’re on easy, and you get a level up from combat exp, you automatically get all your HP restored, and the enemy might as well give up at that point. Also, easy gives you eight full turns to retreat in case of a KO, and normal gives five. That might not seem like much, but three additional chases to survive are a pretty high amount. 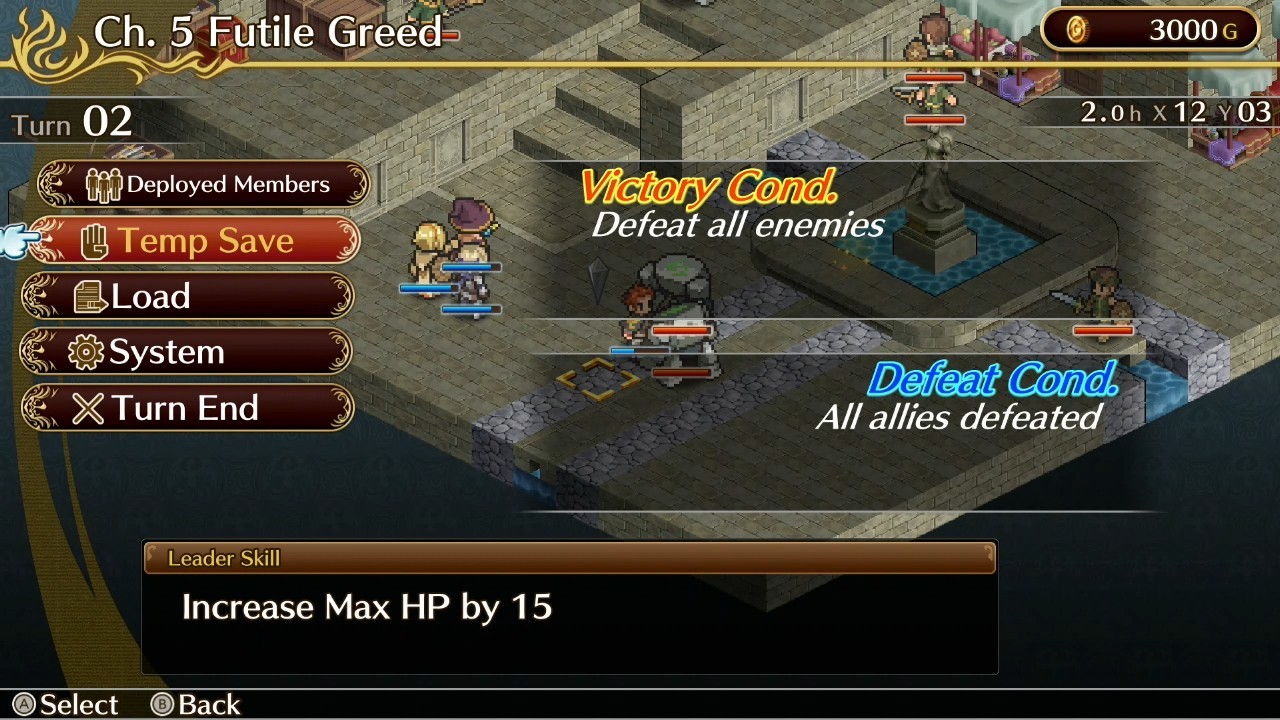 The enemy AI of Mercenaries Wings: The False Phoenix is incredibly straightforward and blunt in all cases, with very little strategy baked into what they bring to the field. They’ll all divide up and charge at you, occasionally healing themselves or healing the boss (if a boss defeat is the round condition), and very rarely withdraw when their HP is down. Spellcasters will target other spellcasters or the largest in your party, and ranged attackers will purposely put distance between themselves and you before striking even though there’s no penalty for using ranged attacks right up close with someone. Well, I suppose the penalty is automatically getting hit back, which is another thing I didn’t love: 100% counter rates. No matter what, as long as you’re in striking distance, you hit the enemy back and they hit you back when a blow lands. It feels a bit ridiculous and deeply unbalances how combat goes, especially once you buff up a couple of tanks to throw into the mix. Granted, counters never hit as hard as a primary attack, but it still is some bonus damage that you weren’t initially planning on (but later really plan on).

As your characters grow in levels, you’ll have the chance to change their character classes through a sort of skill tree, which adds a bit of role-playing to Mercenaries Wings. You have to choose the path you’ll go down in order to advance to the next stage of your class, and, once you make that move, you can always spend skill points (SP) to unlock the other branch. In fact, there’s a couple of class upgrades that require specific items, so there’s even a sense of patience if you want to see exactly how Francis the Acolyte turns into a fantastic priest or summoner or whatever. Getting to the title of “Gun Master” is a great adventure, and the additional skills are a nice perk in adding some personal variety to the game. You’ll want to make sure you get those new titles unlocked and then center them as the leader for each fight: whomever is chosen as the leader will grant “Leader Skills” to the party and add some kind of buff to help turn the tides of combat. 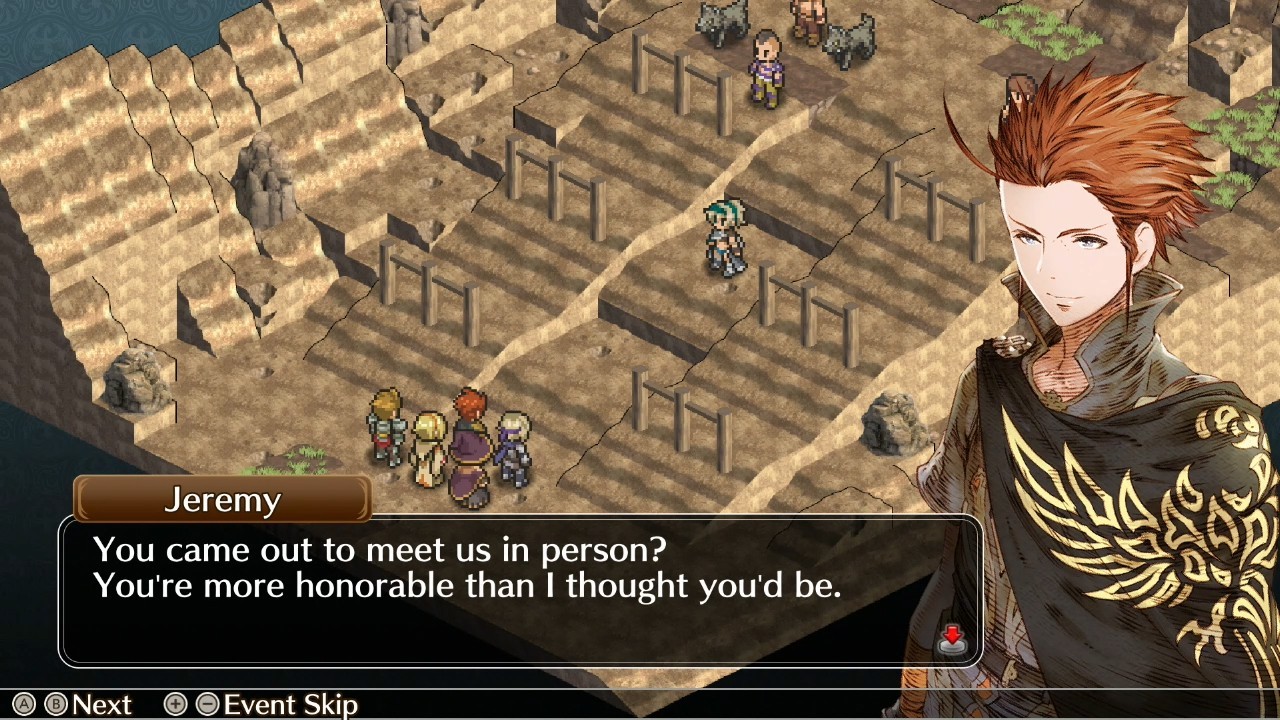 Between stages, you’ll have time to visit a store that has no storefront, equip items that you find on the battlefield or just purchase, and rerun old missions if you really want to grind yourself up prior to the next character, which you might as well do because there’s nothing else to see here. Seriously, there’s not even a map to give you the illusion of choice for what’ll be coming next: you just pick the “Story” option and you dive into the next chapter, the next three screens of expositional text, and then 5-15 minutes of turn based combat. The fights are pretty short, so might as well go back and build up so you can turn into the next stage of mayhem.

What really irks me is that Mercenaries Wings doesn’t even look particularly great. When I think about Final Fantasy Tactics, I realize that the first game came out over twenty years ago and looked better than this game does right now. The developers are clearly trying to copy a certain 16 bit style while adding some depth perception through leveled terrain, but it just feels incredibly rough and coarse. The avatars are a bit too pixelated, the weapons are all very generic in thumbnails, and the entirety of the visual budget is blown on the portraits during the story text, which, again, I’m severely less interested in. The music isn’t bad, but it’s repetitive and very forgettable. I tried having the volume up to get a better sense of the atmosphere and the world of Dryden, and the result was “Wow, this is exactly the music I imagined, and I’ve heard it before”. There’s just nothing here that compels me to listen to it.

This feels like the Kemco RPG of turn based strategy games. If you’re just super into the idea of grid combat and moving characters around, grinding out levels for new skills and basically some light story, then Mercenaries Wings: The False Phoenix could be a great choice, and the price is certainly right. However, this is a game you really play because you love the combat and want to keep running it through. Just like I wouldn’t recommend grabbing the Street Fighter Collection unless you LOVED fighting games, I wouldn’t choose Mercenaries Wings as the first turn based strategy game you try, and I would actively advise against it if you weren’t a fan beforehand. Make good decisions: this is for people who love the genre and not many others.

A decent handheld experience for folks who are positively thirsty for turn based strategy combat but not looking for much else.