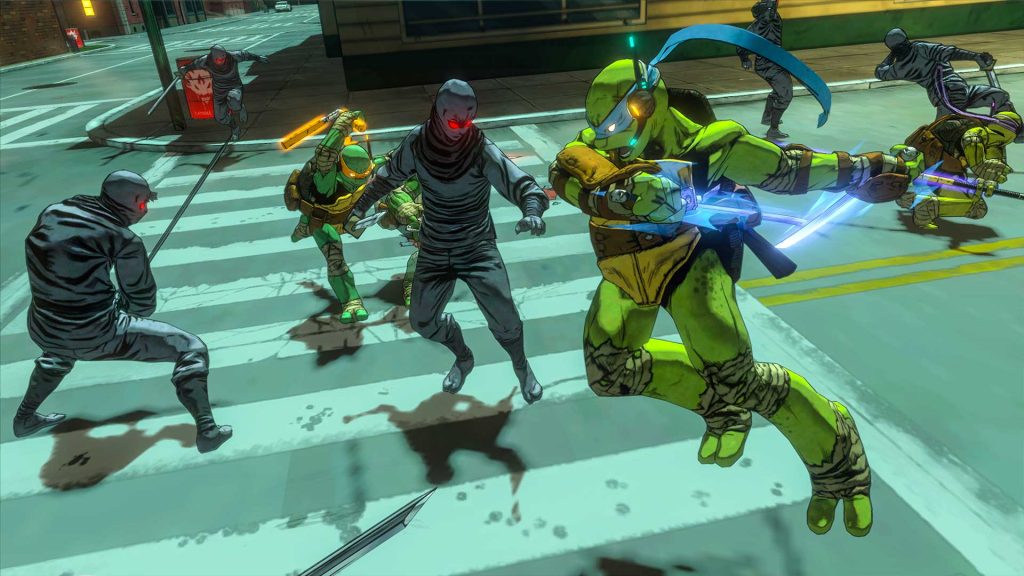 Despite a somewhat limited budget and what I’m sure was a rather unforgiving deadline, Platinum Games did a great job of recreating the magic of 80s animated stalwart, Transformers while delivering a surprisingly solid, open(ish) world brawler in the process. It wasn’t in the same league as Bayonetta 2 (what is?), but judged upon its own merits, Transformes: Devastation has to go down as one of the most pleasant gaming surprises of the last 12 months.

With memories of that unexpected success story still fresh in the memory, it’s no wonder that expectations were high for Platinum’s next crack at a beloved 80s franchise. Sadly, while Teenage Mutant Ninja Turtles: Mutants in Manhattan is far from the train wreck that many have suggested, it certainly falls quite a bit short of the high watermark set by Transformers: Devastation, and despite being notably superior to Platinum’s weakest release to date, The Legend or Korra, it nonetheless remains a bitterly disappointing follow up and above all else, a criminally missed opportunity.

What makes it especially disappointing is that, at times, you can totally see the game that this could, and really should have been. You don’t just get a glimpse of it either – you actually play it. When everything comes together and you’re caught up in the moment, putting together cool looking combos with your friends online, Mutants in Manhattan really is the TMNT video game of your dreams. At its best, this is a slick, visually impressive and artistically pleasing take on characters that so many of us have grown up with over the past 25+ years. The problem is that it’s so rarely at its best. Despite these moments of brilliance, Mutants in Manhattan is often a bit of a slog, and while the inclusion of online co-op is certainly a welcome one, the lack of local co-op is nothing short of unforgiveable. 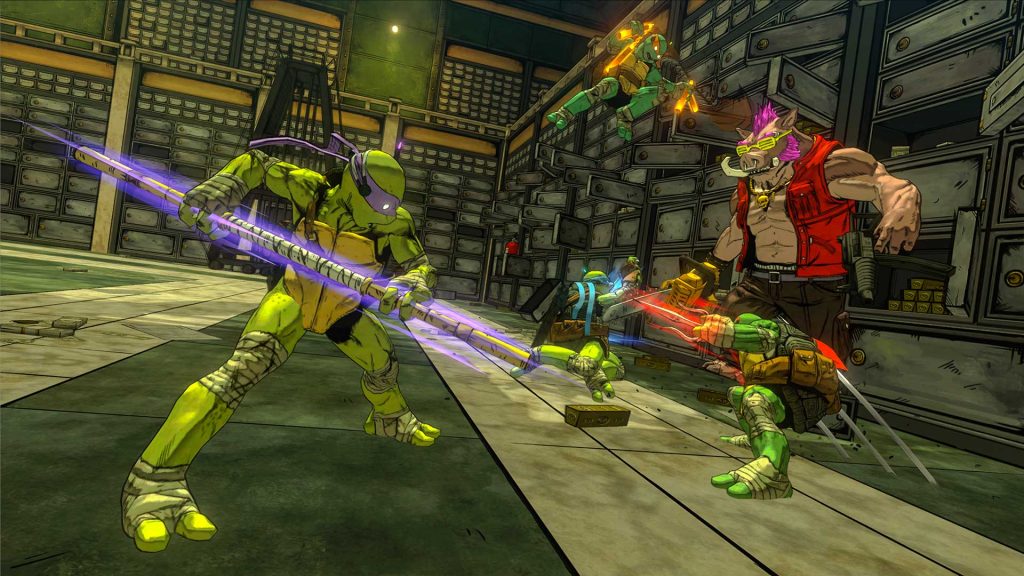 The omission of local co-op might have been easier to take if the game ran at a silky smooth 60fps and was imbued with an array of detailed backgrounds and locations, but no; Mutants in Manhattan is locked at 30fps (a relatively humble goal that the game often fails to achieve), while the backgrounds and locations, despite being pleasant enough, are hardly pushing the PS4 and are prone to no small amount of repetition. Saying that, even if the game was gorgeous and did run at 60fps, that’s still no excuse for the complete absence of local co-op. This is a Turtles game for heaven’s sake – local co-op should be built into the games’ DNA from the very off. Yes, it is mitigated by the aforementions online co-op, which in its defence, can actually be a great deal of fun but, I don’t know, call me a purist, but any Teenage Mutant Ninja Turtles game without local co-op is almost destined to be a disappointment.

It’s not all doom a gloom of course – it might have its fair share of problems, but I actually found, Mutants in Manhattan to be a hugely enjoyable if unacceptably brief adventure. Yes, you could argue that the repetitive nature of the gameplay ensures that it ultimately outstays its welcome long before the end of its (approx.) 6 hour long campaign, but I don’t agree with that at all. As long as you don’t marathon the game (extended play does tend to accentuate its faults), Platinum’s latest has the potential to deliver the kind of quick-fire fun that makes returning for repeat play a surprisingly pleasant proposition. In a world in which the vast majority of games appear to be 3000 hours long and as complex as a giant Rubik’s Cube, it’s almost refreshing to find an unapologetically old school brawler, one that you and our friends (as long as they are online of course), can pick up and play at a moment’s notice.

That’s not to say the combat is overly simplistic of course. It’s true that, on the standard difficulty setting, you can plough your way through the majority of the game by mashing the attack buttons in a half-heartedly coherent manner, but crank the game up to hard, and the subtleties that have always made Platinum actions games quite so special, suddenly become much more apparent. No, it doesn’t come near to matching the depth or finesse of their greatest work, but on the higher difficulty settings, that nuance is definitely there with combos, counters and dodges all playing a much more prevalent role. 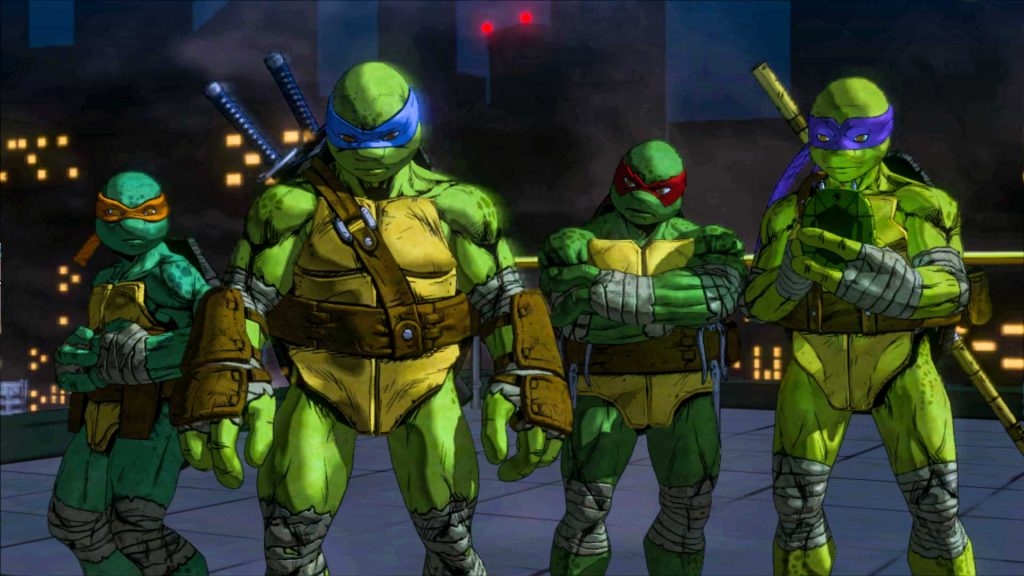 It’s true that the action can get a bit muddled and that the stand-in AI is more than a little ropey, but even with these problems, Mutants in Manhattan is home to enough of that Platinum magic to make the repetition and technical issues surprisingly easy to overlook. Of course, others won’t be as forgiving as I, but if you’re a fan of the Turtles, and especially if you’re a fan of Platinum, this latest attempt to re-capture the magic of the old 90s coin-op machines is arguably as successful as any video game in the past decade. Of course, that is perhaps down primarily to the complete lack of genuinely enjoyable TMNT video games out there, but still, with its array of excellent fan service, solid upgrade system and competent core gameplay, Mutants in Manhattan provides an acceptable if undeniably disappointing adventure for those much loved heroes in a half shell.

Mutants in Manhattan is not the TMNT video game that we were hoping for, but despite the technical issues, the disappointingly bland and underused open world environments and the criminal lack of local co-op, Mutants in Manhattan remains a solid brawler, one that is undoubtedly at its best when played online. The visuals are admittedly inconsistent and it’s far too easy to lose yourself in the midst of combat, but the game is imbued with fantastic character design, moments of genuine beauty and, above all else, a solid combat system (albeit one that is only of any use on the higher difficulty settings). It’s no Bayonetta – heck, it’s not even Transformers: Devestation – but judged upon its own merits, this is a serviceable take on the Teenage Mutant Ninja Turtles universe that many fans are likely to enjoy. Whether it is worth the full retail asking price is another matter, but if you’re willing to wait for the inevitable sales, this much maligned brawler is well worth a look.