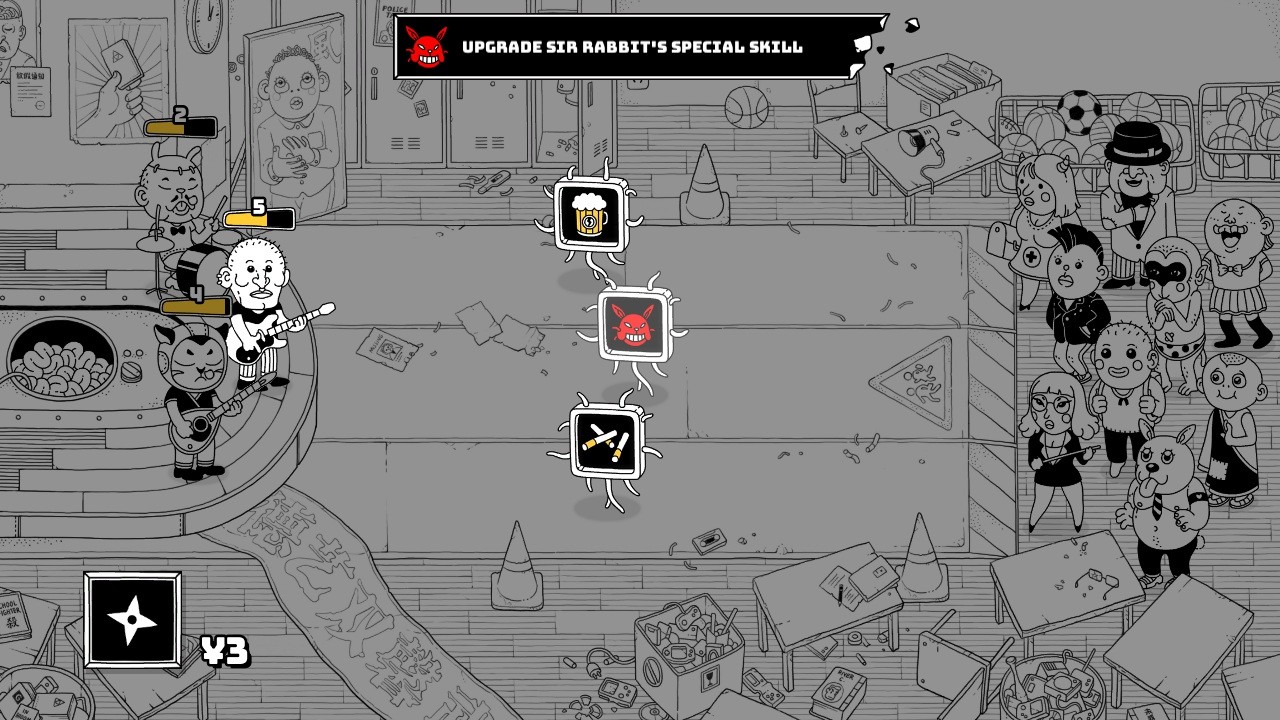 As lovely as it is to play games that are vivid in their colour palettes, I do enjoy the odd game in black and white – especially if it has a decent art style. Well, Cruel Bands Career definitely has the latter and easily a stand out from other titles, but what is the game about, and more importantly, is it any good.

Being a rock fan and someone who appreciates animation, I was hoping for an RPG-lite rhythm game where you assemble a band and take to some musical combos, building the best group in the world (take that, Wyld Stallions). However, Cruel Bands Career is more a mobile-based game in that it’s light in application. You have three band members lined up that must face a bunch of zombie-like drones and groupies and survive until the end of your playlist.

How that works is a lineup on rotation with waves of enemies (and power-ups) moving down one of three lanes. Each wave is slightly staggered, so what you need to do is rotate the band member that will face them head-on. Now, your band doesn’t have superpowers as such, so you literally allow these other characters to walk into you. For the hostile enemies, they’ll take off a chunk of the member’s health (shown in a gauge above their head). Lose all the health from one player, and it’s game over. To replenish health, you have to ‘consume’ groupies. These are fans that head in your direction for a smooch, awarding the player with more health, but the other two members get jealous and lose a fraction of health. So, the challenge is to balance it out as if every member were playing the role of a tank. 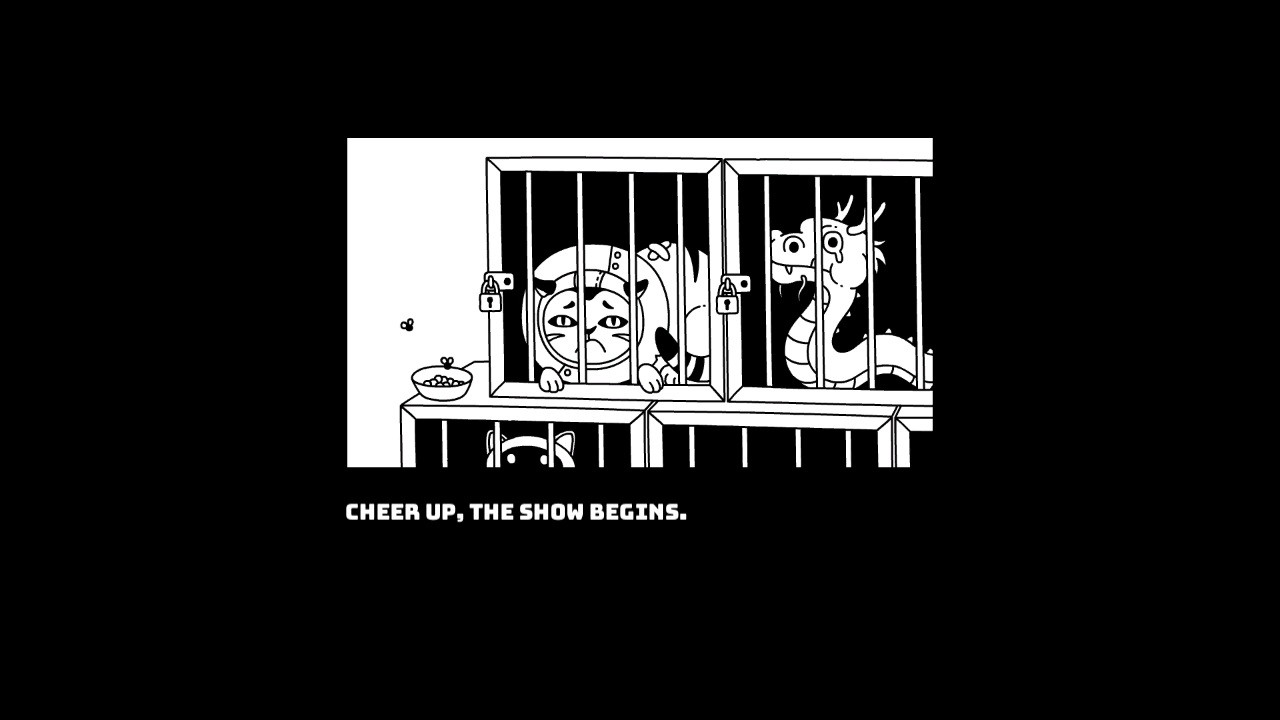 This format stays throughout the game, and the changes only come with new enemies or buffs/debuffs to hinder your progress. One enemy may be stir crazy and inflict one of your team, but said member can then pass that on to another enemy. It’s a basic premise and offers enough challenge, but it’s pretty repetitive. Perhaps the most crucial aspect of a music game is…the music. As a rock band, the tunes they play are pretty mediocre, and for me, a bit of a letdown. If the songs had a bit more energy or a hook, that would be just a bit more incentive to keep playing, but as the game isn’t a rhythm game, you could play the game on mute, and it wouldn’t make a difference. Quite disappointing then as the art style is superb.

It reminds me a little of the classic cartoons that Cuphead was influenced by, and the characters you face in the game are excellent. The choice of black and white throughout is incredibly striking, though it could have benefitted from the odd splash of colour as used in Mad World, or the more recent Switch release, Neverending Nightmares. The gameplay in Cruel Bands Career then would need to stand out somehow if it has a chance to compete with your ever-growing indie collection. This is where the team side of things comes into play.

While it’s a one-player game, you need to play the game as a unit as you can’t have ‘star player’ to get you through. Just collecting one groupie may give you a bit more health, but at the detriment of the other two players who get jealous and subsequently take a hit on HP. On this basis, you really need to balance it out and spread the damage. But… each time a band member takes a hit, they put away points in the bank of special moves and they can unleash a special ability – essential to surviving in this game, plus there are individual items throughout the level that you can use on the fly. Each member has a special ability too, and I believe you start with four players from the beginning, but through progress, can unlock new players. At the very least, and on a cosmetic level, the new characters look great. 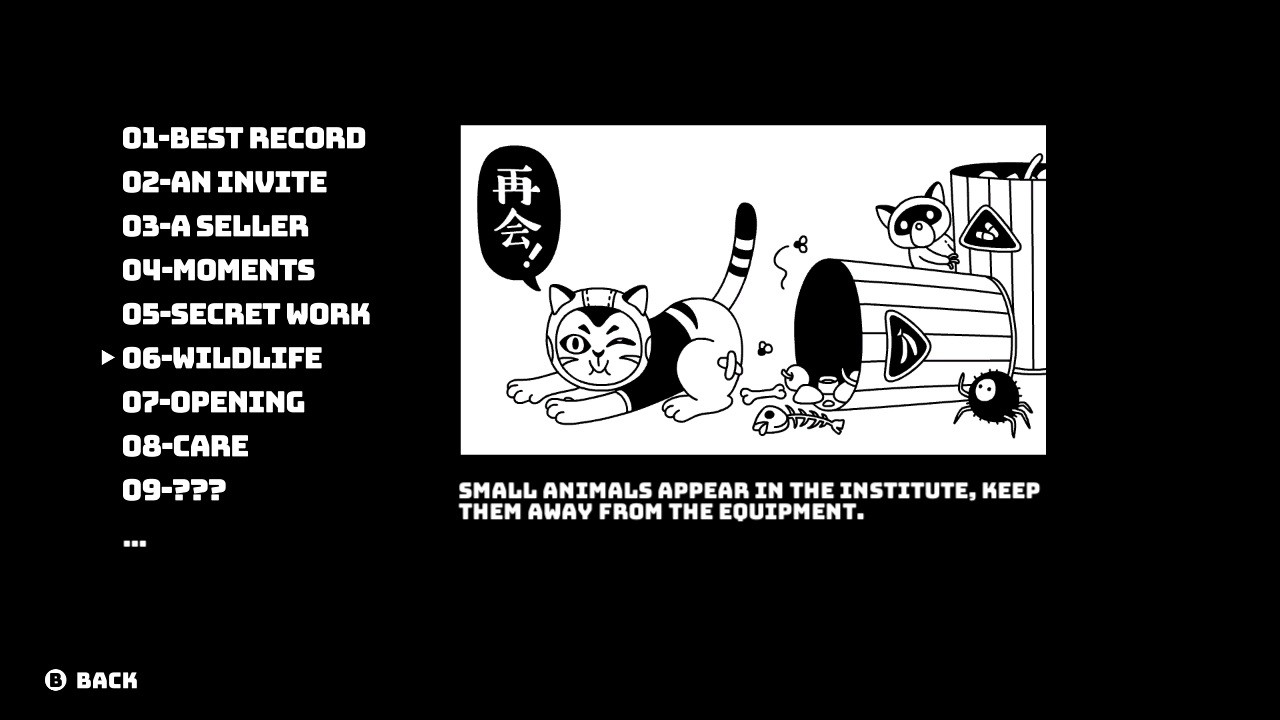 Cruel Bands Career is a straightforward game in design as all you’re doing is rotating three players to match the oncoming waves. It’s like Tetris in some respect (makes sense in my head) and you can even speed up the waves by holding down the A button – perfect if you think you got the right approach for the stage and don’t want to be hanging around. In the first few levels, you can use this quite often, but as you progress, the amount of enemies with debuffs is quite maddening, so you need a strategy. One of those interesting mechanics is the groupies. As before, if they walk into a band member, they’ll award health, but they will only be happy with their favourite. Rotate the lineup, and you’ll see the groupie either frown or smile – the latter being an indication that you’ll get health. Juggling this method, plus the onslaught of enemies – especially released by the rather excellent bosses, and you have a tough game to hand.

In summary, the art design of the game was top notch and the real appeal from my stance. The music isn’t bad at all, but it could have done with a bit more variety. It isn’t essential to the game as it isn’t rhythm-based, but as the protagonists are in a band, it would have been better to be more Metallica than Kenny G. That’s a bad example – the music isn’t terrible! Ignoring the presentation, the core gameplay is simple to play, but hard to master and not something you can do in one go unless you master the patterns. It’s undoubtedly a hard game, and with the unlockable characters with their perks, it’s enough to keep you going, but doubtful you’ll keep coming back to it for replay appeal – unless you’re like me and want look at the pretty characters.

Not a rhythm-based game as it appears, but a simple design that ends up being pretty challenging as you balance out damage distribution in your band lineup. This isn’t a game you can tank through and does require strategy and the use of the abilities and buffs in the game.