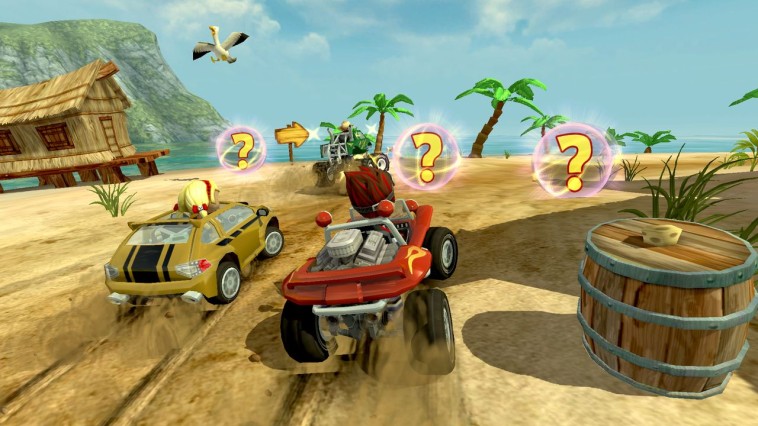 I gotta say, I admire the gumption of the developers of Beach Buggy Racing. When FAST RMX was released, they had the grace of being before Mario Kart 8 Deluxe was ready, and they brought a bit of something different to the table with being a spiritual sequel to Fast Racing Neo (a Wii U title) and not being a straightforward kart racer. So for Beach Buggy Racing to come out, on a Nintendo console, home of the arguably best kart racer around, even if it’s not the wisest decision, you gotta admire the tenacity.

Beach Buggy Racing takes place exactly where you’d think it would. You’re on a beach, somewhere, let’s say Hawaii, and you take part in several, mostly single lap races against other beach bums and odd patrons of the islands. There’s not really a story here, it’s just a bunch of people who like to race, but I think we can all agree that the deep lore of a racing game isn’t as important as nearly every other aspect, so let’s bypass the pleasantries and dive into the guts of it all.

The buggy design inherently gives the driver a lot more bounce and drift than your normal kart racer, and I liked this a lot. It gave the right feeling to where you were, and how the tracks came about. The strategy that came with driving it was a bit more touch and go than I normally would use, with the technique of simply taking your foot off the gas being more effective than slamming on the brakes. Each course has a fair number of twists and turns, not to mention a lot of debris around the level that you may or may not be able to break through. A good driver would do well to try and simply stay in the middle of the course, because you never know when what you think is an easily destructible food stand is going to turn into an impassable barrier that throws you back into last place. 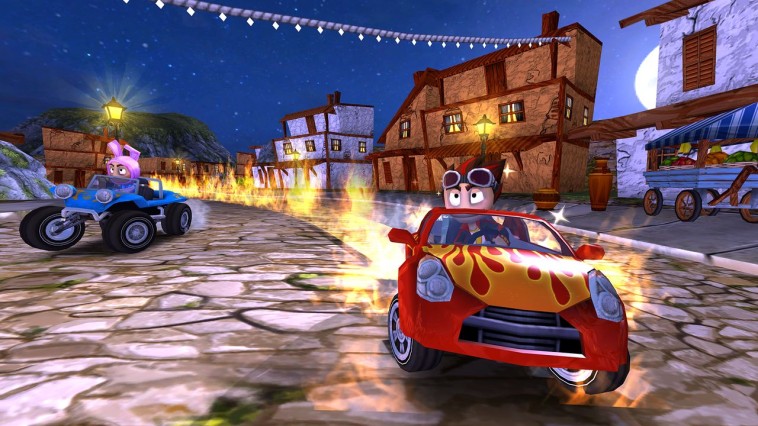 The AI of Beach Buggy Racing brings their A game as long as everyone is clustered together. The racers have their mind set on driving, staying on the course (no insane shortcuts were miraculously found) and using powerups almost as soon as they get them. The powerups range from area upsets, directional attacks and speed boosts, not to mention the invaluable shield boost which is key to beating a majority of the bosses. Once you break away from the pack, however, you find that things tend to be pretty lonely and easy as long as you’re familiar with the course. There isn’t a blue shell equivalent on the beach, so players need only to keep a sufficient distance and maintain their control in order to win. I will say that I wasn’t totally pleased with the controller layout, as the gas as ZR and the brake as ZL was good only as long as you didn’t plan to do anything else. The weapons and player skill were A and X, respectively, which meant giving up a thumb in order to activate something. This isn’t the SNES wild west, I can’t just mash my palm on the buttons and pray for the best.

After you unlock the first boss, the game really opens itself up, adding a single “casual race” option alongside a new tournament choice. The tournaments offer you an opportunity to prove skill and gain coins by having circuits based entirely around one type of vehicle, which there is a surprising variety available in the game. I recommend the tournament option to give yourself a chance to experience all the game has to offer without needing to deal with the boss battles and the strange, sometimes repetitive races that take place in areas that are both unfamiliar and feel very, very similar. There’s also a daily challenge that doesn’t take into account what you may or may not have seen yet, and just throws you into a setting with unlimited chances to achieve the necessary goal. Beach Buggy Racing has taken some smart choices by making a system that can be used immediately, provides some great bonuses and also rewards people who do it every day, as five daily challenges completed in a row yields a larger cash bonus in the end.

And you want those cash bonuses. The coins you collect all go into upgrading the different cars in fields such as acceleration and handling, and there’s a fair amount of upgrade potential in each. I say each because, unlike certain other kart racers, every iteration of vehicle is available from the very beginning. You may need to keep to the primary car just to get a feel for things, but swapping cars in Beach Buggy Racing is as natural as a hermit crab changing his shell. If the hermit crab could then also drop money into making sure his shell was tricked out and had a higher top speed. 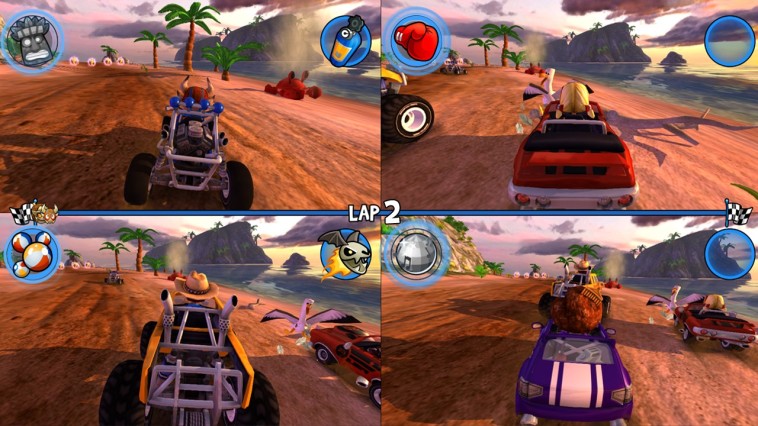 The game looks and feels a bit cartoony, but I suppose that works well for the overall element and atmosphere of the game. Everyone is humanoid with especially big eyes and round heads, but it’s less anime and more the weird 3D CGI take that designers have started using in certain games. I was creepily reminded of how Garfield looks in that Pokemon Go knockoff game, but this doesn’t have the same fear factor to it. Instead, everything is very non-threatening so, when you get characters who are clearly supposed to be the Grim Reaper, they just look goofy and playful instead of menacing and macabre. That same look made me think I would hate Beach Buggy Racing, but it caught me off guard and, pretty soon, I was enjoying zipping through dinosaur jungles, active volcanoes and villa towns that reminded me a lot of race tracks that I’d done in other games, but not enough to properly call shenanigans.

Lastly, Beach Buggy Racing is trying it’s best to be a great multiplayer situation, and I think it succeeds marvelously. With zero online play available, you and friends can still do four player split screen, which works about as well as you’d hope when in handheld and pretty passable in TV mode. The input delay is quite negligible, but I felt that the game hit it’s multiplayer sweet spot with two players instead of four, giving the maximum amount of landscape as well as a clearer view overall. I wish the multiplayer gave you the option to have single lap races like the career mode offers, but the adjustable speeds, along with full character and cart choices, really gave a lot to choose from even from the beginning.

Beach Buggy Racing is a pleasant surprise that could easily sail through the eShop without much fanfare or attention whatsoever. There’s no gimmicky mascots, franchise tie ins or big names that could make it soar above the rest. It’s a freemium title on mobile devices that could instantly turn off players familiar to the name and, all in all, it’s not terrifically long or detailed. But it is fun. It’s fun and does it’s best to have replay value, strong core conditions and enough versatility to not feel overly repetitive. Vector Unit has done a solid job of making sure there’s plenty here for players to feel satisfied with their purchase, and the investment is substantially less than the other racing games currently available. If you’re looking for a fun, simple experience that is great for kids or people who genuinely find Mario Kart a bit complex, this is a great title to grab.