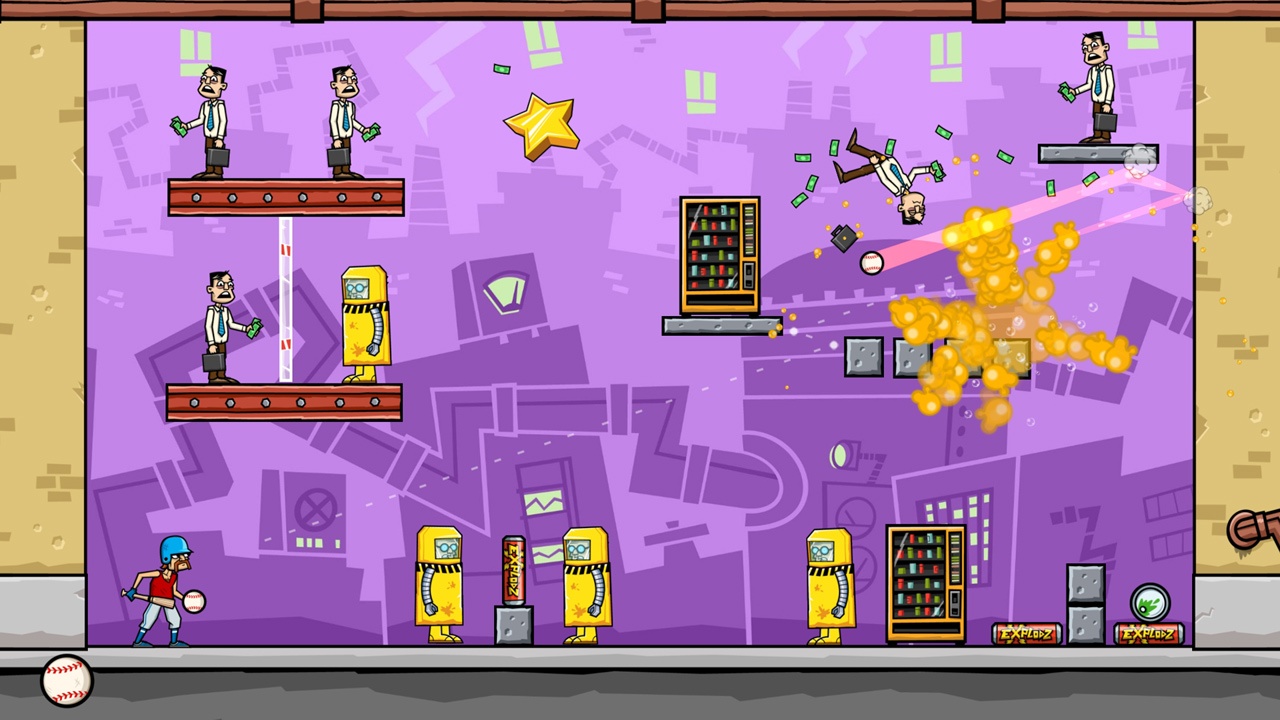 Baseball Riot has seriously left me in a torn state of opinion. On the one hand, I applaud innovation and trying new things, and at least give nods when someone’s brand new take on stuff fails miserably. But I also do value and understand the notion of “if it ain’t broke, don’t fix it,” because constantly reinventing the wheel just leads to people ultimately making square wheels, and, guess what, those fuckers don’t work. So it’s a seriously difficult thing to look at something, realize that very, very little is different, but also understand that it’s the perfect vehicle to deliver what the developers wanted. So, without further ado, let’s do our best to break down and analyze the latest puzzle port from 10Tons Ltd, Baseball Riot.

One thing people who’ve followed the titles of 10Tons will immediately notice is the striking similarities to Tennis in the Face. Not just in the gameplay and design, but in the very concept itself. You play former baseball great Gabe Carpaccio, who was woefully cut short in his prime by a hit to the knee and now sells used sports equipment. The strangely recurring antagonist, Explodz Energy Drink, has bought Gabe’s former team and now Gabe is mad with rage or revenge or something. Unlike Tennis in the Face, which saw a tennis ace take his vengeance upon the energy drink company that ruined his life, it feels like Gabe’s anger is apropos of anything at the beginning, and you’d be totally lost if you didn’t play Tennis in the Face. Is that what it’s come to? We need to play multiple puzzle games to understand the complex universe of Explodz? At least King Oddball stands alone. In any case, Gabe sees that Explodz makes people into junkie zombies and sets out to destroy the company by hitting everyone in the face with serious line drives. 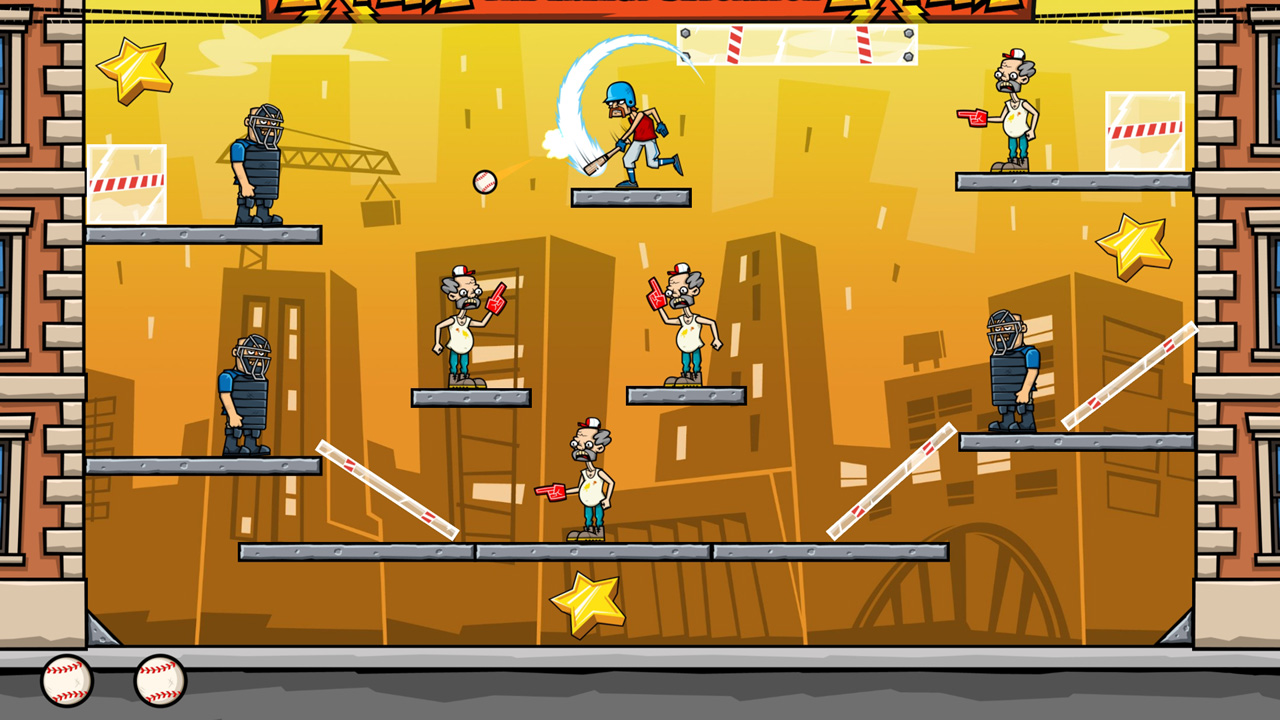 If you’ve played a single physics puzzle games (Angry Birds and the like) you know the drill here. You have a limited number of shots to knock over all the angry and crazy people who stand in your way, and, as an added bonus, try to hit the stars that are placed in hard to reach spots throughout the level. Starting out with fairly innocuous warm bodies, you quickly evolve into more complex targets, like dudes who can catch the ball in their mitts, weird hipster LARPers with shields and swords, and umpires who are totally immune to everything except for hits to the back of the head. Actually, for most of these targets, you want to try and hit them in the back: it’s the easiest way to deal with the defense system they have set up. Of course, these tricky drones can sometimes face the other way and rend your awesome strategy totally useless. In all seriousness, the actual targets themselves are rarely and issue, and it’s more a matter of getting that perfect angle in order to sneak a great shot to maximize your value. Since the stars and the baddies are often quite a ways apart, you end up needing to measure the value and payout of every engagement.

One thing that I noticed is that Baseball Riot feels a LOT more difficult than Tennis in the Face. With Tennis, most of the shots I lined up felt totally intuitive, like you could just see the lines forming before you made the swing. Finishing with extra balls was a normal standard for me, and I didn’t really have any difficulty until I got about halfway through the map. By comparison, I was already restarting and doing changes by degrees with Baseball Riot by about the fifth or sixth stage. I’m not going to pretend that I’m not rusty: physics puzzle games are fun and engaging, but they’re not the only genre that I play in a normal amount of time. However, I do feel that the way the levels are set up specifically ask for a single, specific shot to happen in order to make the perfect line drive and get as many things as possible. The presence of ball stopping glass seemed to be more prevalent, and the exploding crates didn’t always do the chain effect that I intended. In short, this is less a game of immediate gratification and more one of trial and error. 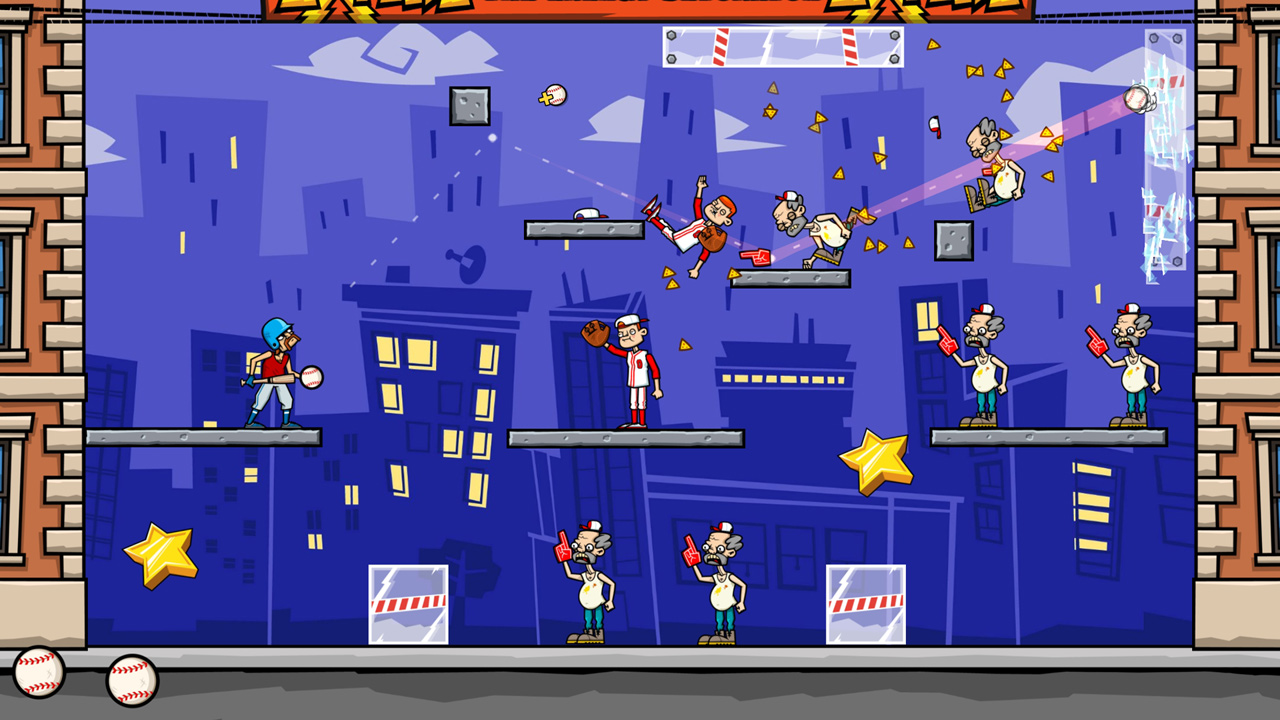 The only serious drawback that I see with Baseball Riot is that there just isn’t a ton of incentive to try and “do better” with the levels. On the one hand, being able to complete the levels with three stars and extra balls will, eventually, unlock achievements and give you a better standing in the stadium that crops up in every grid map that you fly to and visit. This is definitely a situation where competing against yourself and seeking a personal best is the main drive. On the other, there isn’t a numerical score that comes with each level, just a three star rating that, from a quick glance, doesn’t really care if you did it with four balls remaining or zero. This might seem really petty, but I enjoy at least seeing what my score is going to be when the entirety of the game is based around how well you can complete a puzzle. It’s fine that there’s no online leaderboard or some kind of bragging system (this is mostly Nintendo’s realm of inactivity currently), but we need a bit to base our own successes on. Without that, we’re just swinging away into the wind.

Baseball Riot doesn’t bring anything crazy different to the table, and, if you’ve played as many of the 10Tons Ltd games as I have, you won’t see anything jump out at you that makes you sit up and take notice. But, by the same token, it’s a great extension of the puzzle situations that already exist and comes at a fair and reasonable price to add more to your library, and it does have a fairly humorous presentation. If this type of game is your bag, then you’re going to have exactly what you want on the Switch and be able to zen out while striking apologetic businessmen in the face with wayward baseballs. If you were looking for an actual sports game, however, I think you gotta head back to the dugout.