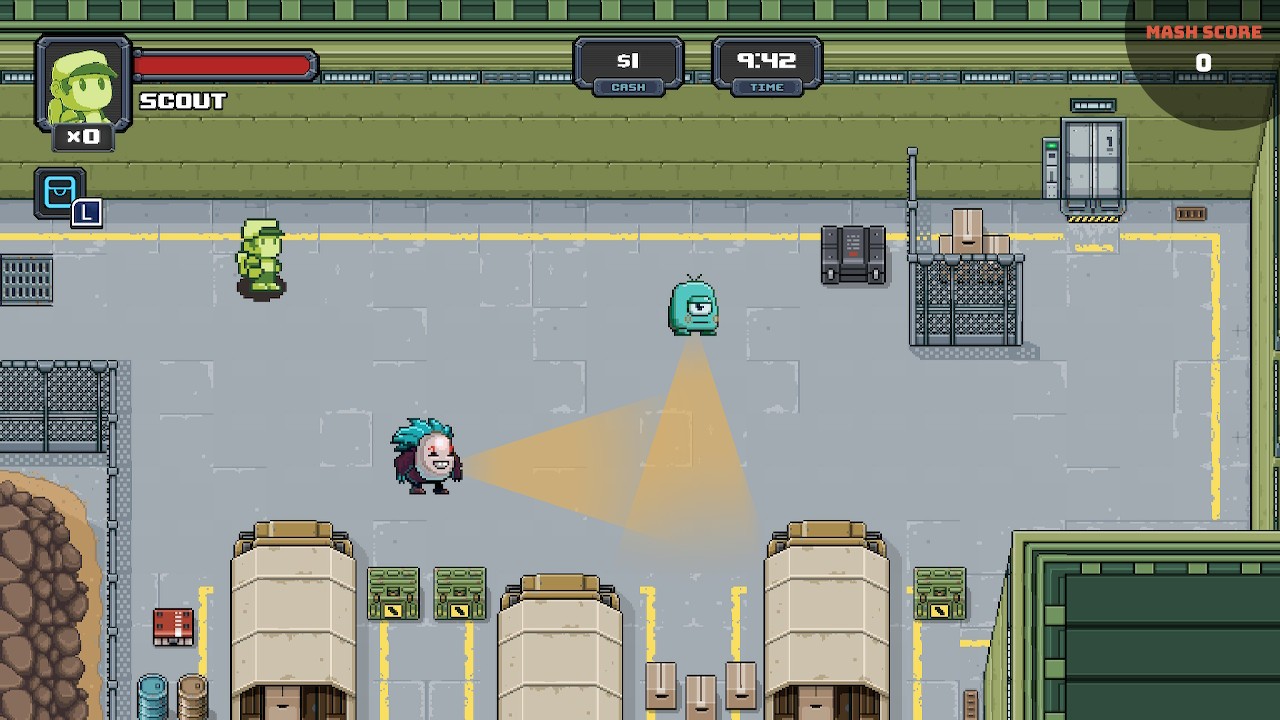 The best laid plans come from a spot of genuine ingenuity and invention. When we push the bounds of video game archetyping, we understand that not every single title is going to be a success. Still, the risk being taken usually results in a pretty unique product, even if it isn’t exactly what people want or even consider playing for a long period of time. For Digital Continue, they wanted to try and put a bit more of the game design into the player’s hands without forcing them to figure out code and sprite development. It’s a very cool idea, but, as we can see in SuperMash, it doesn’t always do enough to keep the player fully involved.

SuperMash takes place in the backdrop of a video game store run by some characters who truly love to game and share with others (as shown by a cute animation depicting the main character giving away his gaming system to a less fortunate kid). One day, they discover an old system that, inexplicably, has the ability to play two carts at once. The result? The games smash together and create a brand new experience, which they dub a SuperMash. Eager to test the bounds of this new machine, the players dive into a wild and weird world of combining the six fundamental types of games in different ways, both for their own experimentation and for the enjoyment of their patrons, from whom they can take requests.

As we just said, the core idea of SuperMash is to take the six subsets of games (JRPG, Stealth, Platformer, Action Adventure, Shoot-Em-Up and Metrovania) and combine them in different ways. The combination system is very simple, though it can become more complex. Initially, all you have to do is take the two carts, put them into the machine and hit the button. It takes a moment for the game to load up (each and every time), but, once it gets going, you can see how your creation has come to life. I find it interesting that these are the six subsets of games, and that two of the arguably larger genres (sports and puzzles) are left out, but that would probably be harder to emulate on the fly, not to mention the idea of “sports” being so broad. Anyways, these six being chosen allows for a bit of flexibility, particularly depending on which cart you add first, and you also have the option of a “pure” game, i.e. combining two of the same cart to just make one singular type of game. 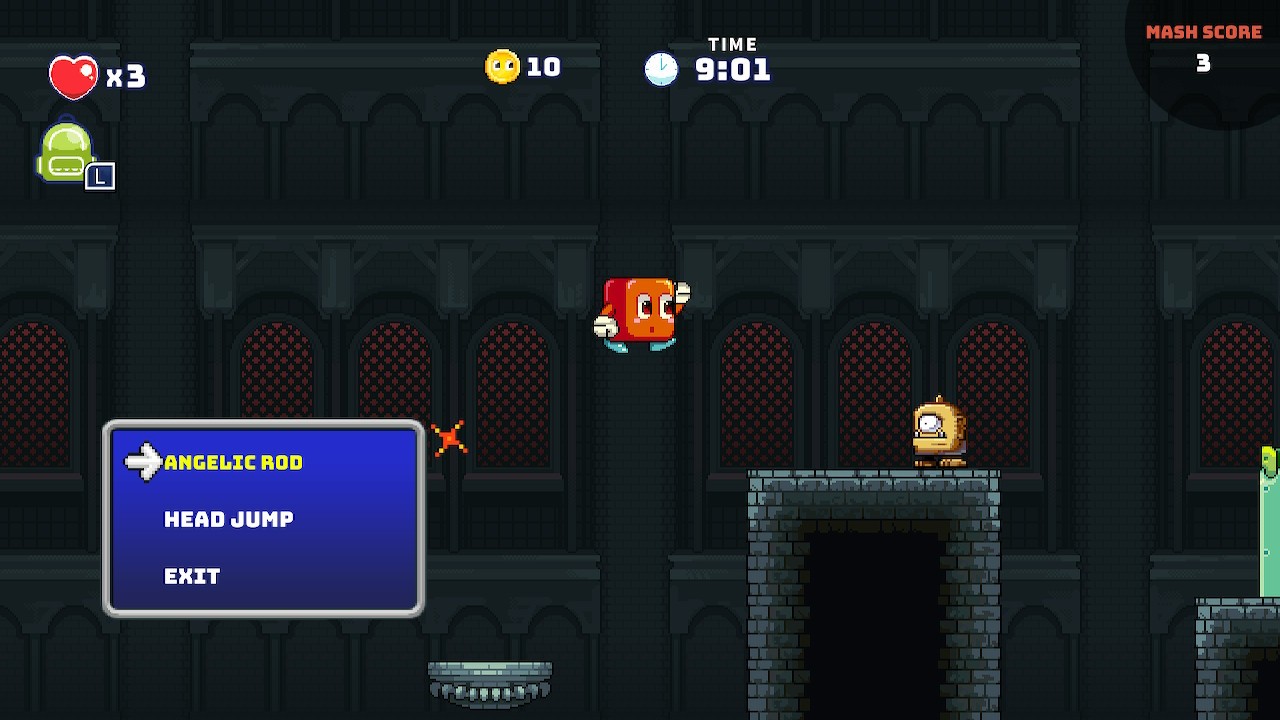 The first time that you make a mashup in SuperMash is something very exciting and endearing. My first mash was of a JRPG and a Shoot-Em-Up, which gave me the ability to “pilot” a character with spiky hair on a vertical landscape, using my bronze axe to try and take down tanks and airplanes while occasionally entering into random turn based battles. Once in the battle, my party was myself, some random mercenary assistant, and a fighter plane that was equipped with a sword. The whole thing was so unbelievably ridiculous that I instantly fell in love and was almost heartbroken when I completed the win condition, which was to blow up fifteen tanks. Winning unlocked some cards that I could use to “set” different game elements in the future (such as a type of enemy, a hero, a weapon or more), and then I was back into the mix, trying to create a new type of game.

What keeps SuperMash moving is the absurdity of things when it works and the momentum that you, the player, can create. As long as I was creating new mashes and seeing amazing situations, I was a happy kid. A stealth platformer was pretty challenging, especially when you consider that so many of the enemies were usually hiding in plain sight. An action adventure metrovania was pretty over the plate, but I had the additional caveat of my only weapon being grenades and having zero extra lives, which complicated, well, everything. Every single one of the game types will bring something into the creation you make, and you can adjust the difficulty and the length of the game prior to starting it up, so you can do something short but hard, or something long, yet easy. As long as you’re in the mindset, you’re golden.

However, there are a couple of things that do take you out of the mindset, and this is a bit of a falter point for SuperMash. For one, it’s not just constantly inside the games. Between mashes, you play the lanky main character who walks around the game store, talking with coworkers and, later on, customers, and this part always felt like a lull. You obviously don’t run around the store, but everything outside of the mashes was very unhurried, almost lackadaisical. You want to get your system to discover more potential and ideas (you can unlock better graphics and sprites with a more 16 bit feel after some time), but you need to do these “missions” beforehand, and they can be a bore. Make three easy length games. Make three normal length games. Save a game. Create a JRPG and Stealth mashup. These are things that you’d probably do in due course, but the pacing with which you had to do them was almost frustrating. Plus, you get a customer mission really early on, and then you don’t see another for quite a while, leaving you feeling like the store generally isn’t doing well. Please keep in mind, this does change and you get positively inundated with customer requests, but it takes a little while. 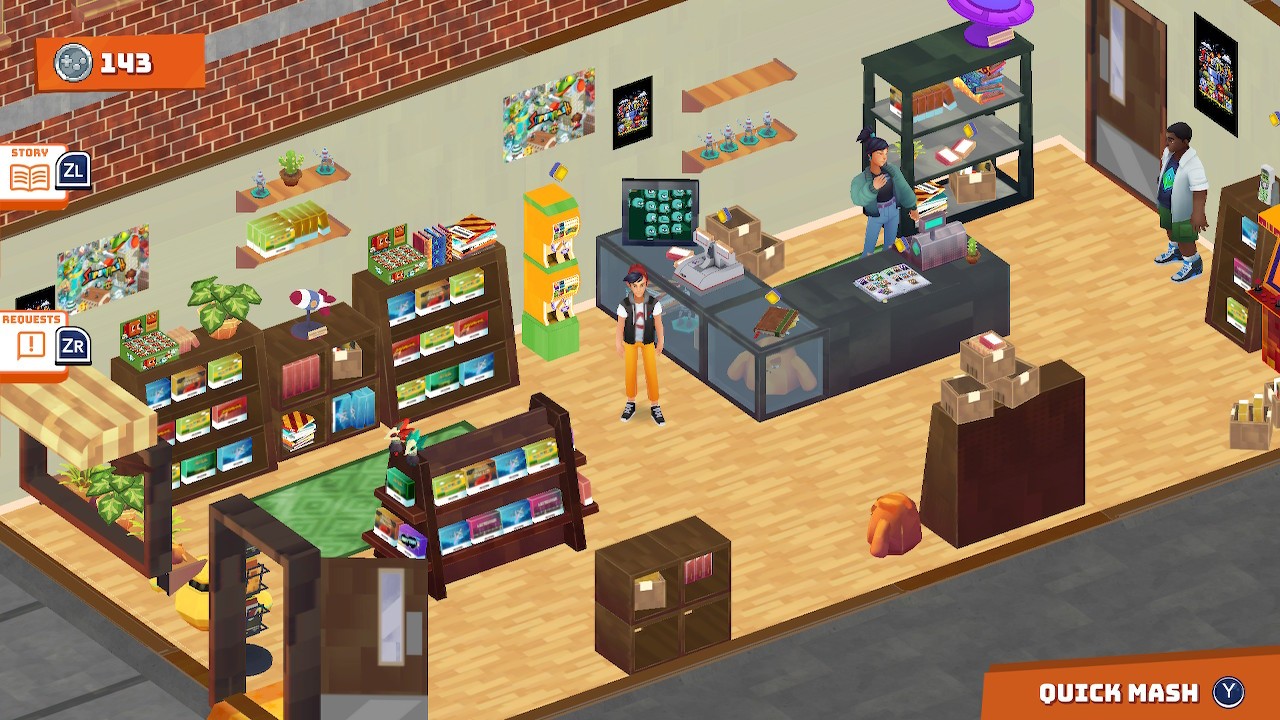 Additionally, the game glitches are genuinely not a fun aspect of the play aspect. While I’m sure they seemed extremely amusing to the developers when they came up with the idea, I don’t think they realized that SuperMash might have a lot going on anyways without the chance of impossible game glitches occuring. Since each combination of game is unique, you won’t get the same glitches for the same combinations, so don’t think every single action adventure stealth game will be cursed with a glitch where the screen rotates slightly every time you use your weapon. That was so insufferable that I just quit and made a new one instead of trying to get through it. Or when you get hit, something spawns: sounds simple enough, right? But with the JRPG element in the mix, that means you might spawn additional things on the turn based battlefield, and I don’t mean more enemies. I mean arbitrary things that your character can’t attack, but recognizes as active elements, so the battle never ends BUT you can’t fight them. Thank God I could run away (losing all gold and EXP from the fight), but then I just had to keep running for the remainder of the game until I met the win conditions. Even positive glitches like “restore health” get annoying if they’re tied to something arbitrary like “walking.” I sincerely was not a fan.

Yet, when the mashes come together, they’re sincerely fun and exciting. I love that SuperMash allows for so many levels of customization within the chaos, and the ability to buy more attribute cards from the vending machines to see if you’ll get lucky. I love that you can share codes with friends for when you stumble on a particularly good or terrible mash. I positively adore the backstories that are baked into every single mash game, and they were sometimes similar but never the same, and always taking the mickey out of themselves. The whole experience is a massive homage to gaming as a lifestyle and as a generational growth project, and, on that level, it’s a huge success. The feeling is there, and, when you’re in it, it’s fantastic. It only falters in the same way that all games falter: when it’s not fun anymore. Sadly, that can change from mash to mash, and the player needs to steel themselves that a particular mix might just be boring, frustrating, or plainly bad. The random mashes that the game generates, at least alleviates you of the shame of having made it yourself, but also remove the pleasure of trying to bake something.

Overall, I think SuperMash is a great thought that seems to live or die depending on how the dice land on any given day. There’s too much to chance for consistent enjoyment, and I hope we see more added to the game in the future, either in DLC or a sequel, because the concept really is great. Players should certainly consider it if they’re curious, but also see a few clips of what the games could be before diving in: you don’t want your dreams to get mashed.

Mash? Absolutely. Super? That really depends on how the game is feeling on any given day.