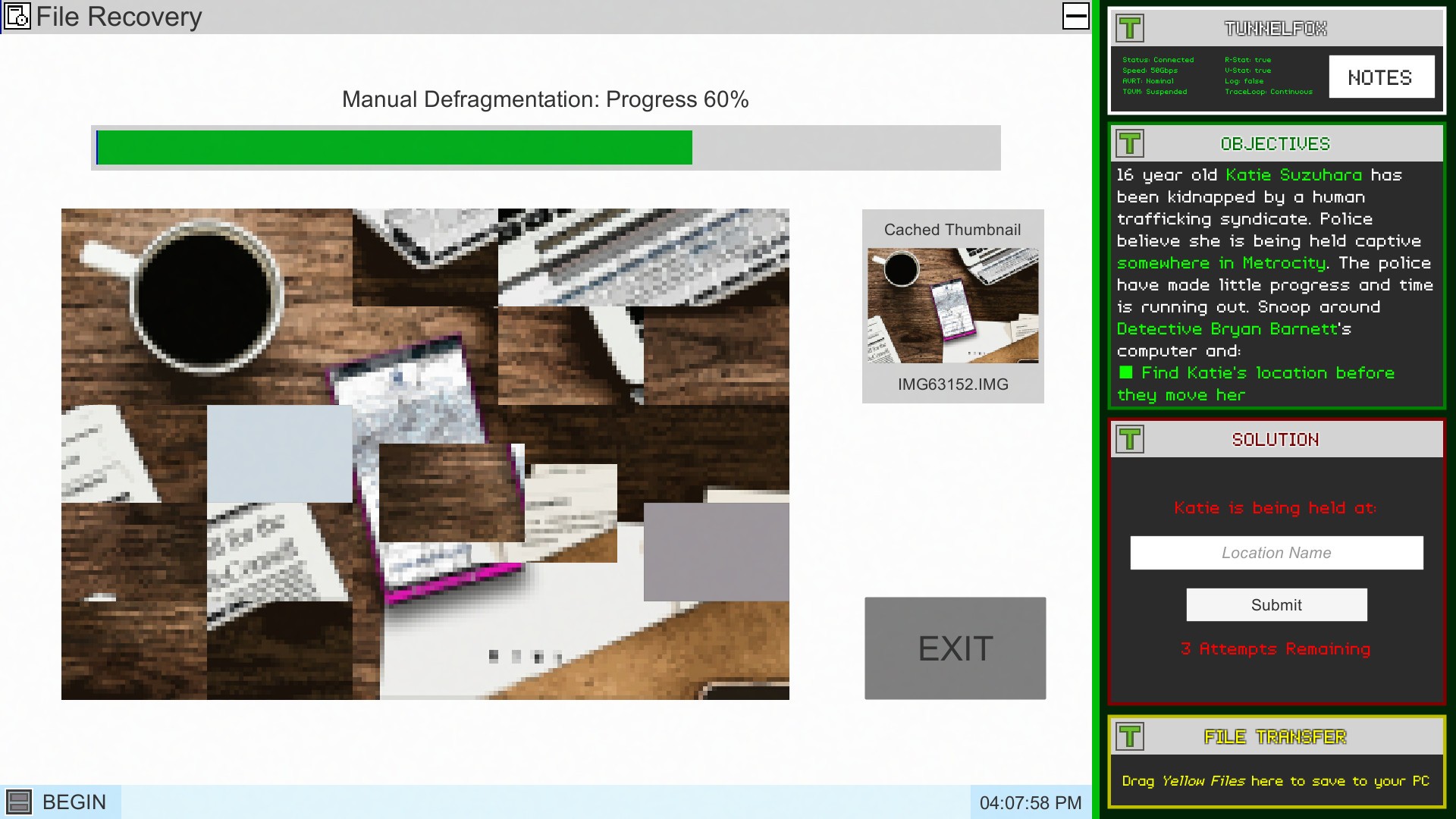 Greyhat – A Digital Detective Adventure, what the hell is this? That’s what I first thought when I found out about this game. I’m not sure if I was just out of the loop, or if this actually came out of nowhere, but upon first opening Greyhat’s Steam page I found myself quite interested in what I saw. Although the game’s visuals seemed to be of low fidelity, it was the game’s description that actually pulled me in. So, what is Greyhat all about?

In Greyhat, players play as a notorious hacker that ended up messing with the wrong people in what was supposedly their last job before retiring. In response, whoever you ended up messing with ends up kidnapping your daughter, thus setting you on a path to find her by any means necessary. Greyhat is both a sad and a gratifying tale about loss and what a father will do to find his long-lost child. 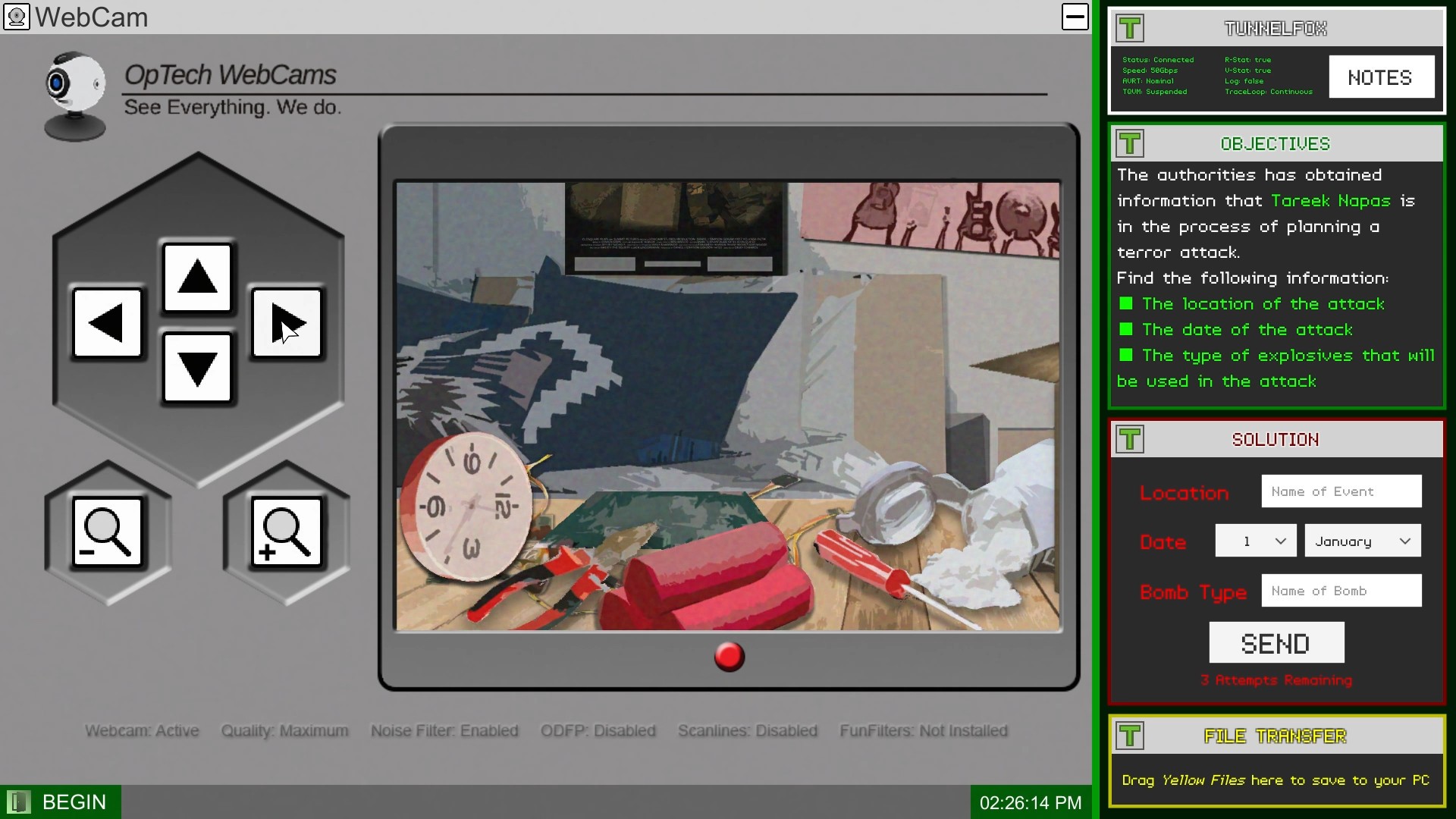 Contrary to what it might initially look like, Greyhat isn’t exactly a hacking game, that’s just one of the themes of the game, you won’t really be hacking anything. Instead, Greyhat is actually a detective adventure game, where the clues needed to solve puzzles can be found by interacting with your computer as you access other people’s computers by tapping into their IP addresses. In order to slowly gather clues about your daughter’s whereabouts, you perform a series of jobs to unknown individuals who happen to contact you through an encrypted messaging system.

Each of these jobs could be described as a single level or mission, but they’re much more than that. Whenever you receive a new task, the process is always the same at first, you grab whatever IP you were sent and you connect to it, thus granting you access to someone’s computer. Once you’re in, you’re given a specific objective and a limited number of tries to submit or attempt to do whatever you’re asked to. While one time you might look for evidence to dismantle a group of neo-nazis, another time you might be just performing corporate espionage.

In order to complete your objectives, you must do things such as read through people’s emails, check their pictures, search for documents, look for hidden passwords and information to access things that are locked away, and access their webcams and look for clues around you. Once you have whatever you need, you simply disconnect and go back to your own computer. There’s even the option to take note of things that you run into while conducting your investigations that you might think may be of use. However, there were some puzzles where I actually had to grab a pen and paper to solve them. For some people, this might be too much, but I personally love it when games force you to adapt and come up with your own way to overcome their challenges. 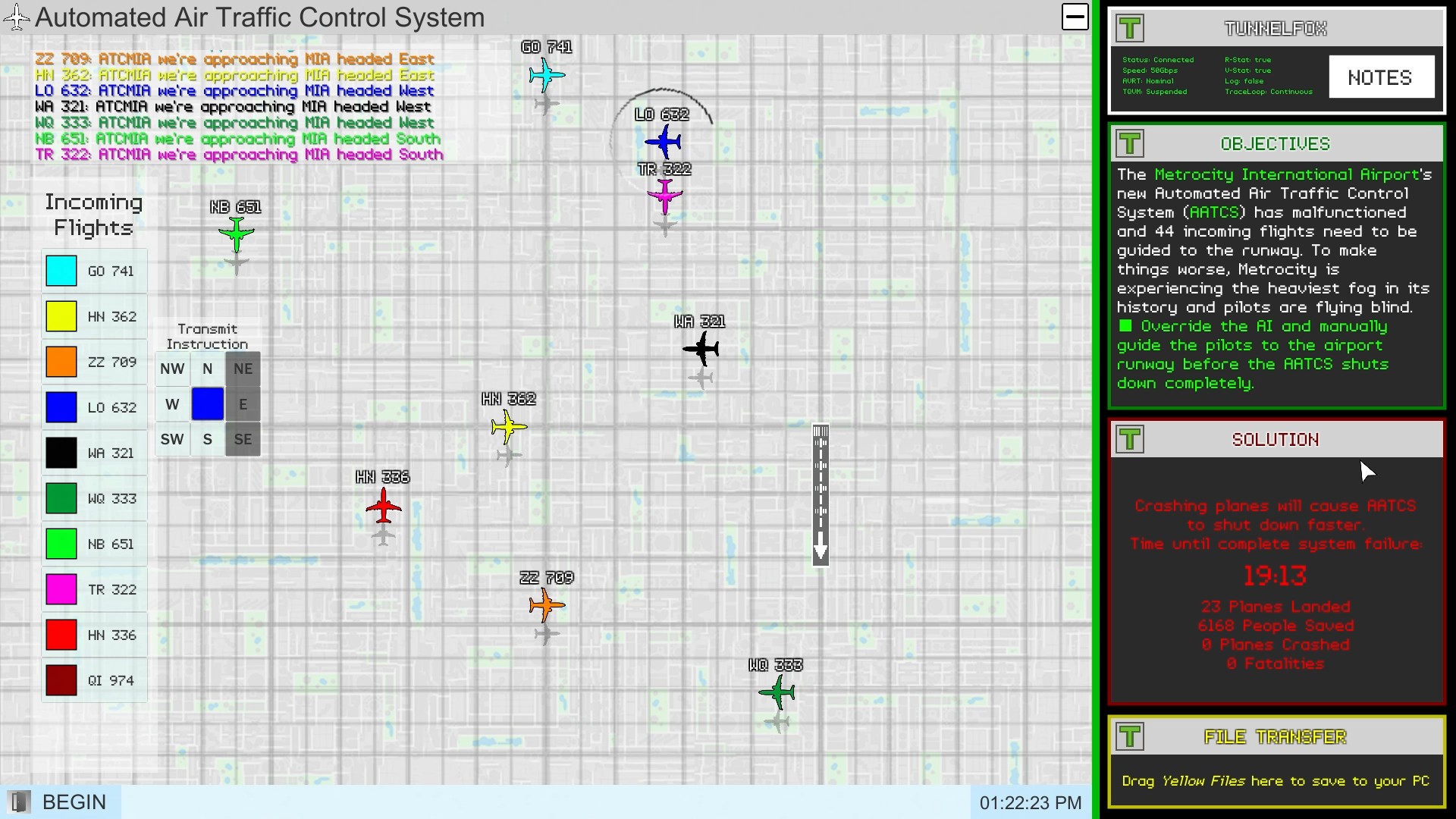 Although some jobs might involve that sort of approach of looking for information, some of them also resort to a mixture of that and some mini-game. For instance, there are a few times where you have to triangulate someone’s location based on their cell phone by using cell towers, which can only be done after you figure out their cell phone number. Meanwhile, there’s also this one mission where you have to safely redirect airplanes towards the airport and avoid any mid-air crashes. This should give you some idea of what to expect to face, but rest assured that Greyhat really is a unique narrative-driven game where it just constantly keeps throwing new, exciting and cryptic situations at you.

It’s also worth noting that this is definitely not one of those games where you can’t just brute force your way. Things such as passwords, clues and solutions change every time, so this ensures that every playthrough is different in some way. Still, if you find yourself with no idea about what to do, which happened to me a couple of times, there is a hint system that you can use. Having said that, you actually need to buy hints with CatCoins, the currency used by hackers in Greyhat. In the times that I needed some hints to help me progress once I figured it out, I realized that I just wasn’t thinking in the right way. However, there are missions which felt like they’re much more work than they should be, or that they just take too long to complete.

After about 12 hours, I can definitely say that this is one of the most unique games that I ever had the chance to play. Visually the game is pretty simple, but it’s the game as a whole that makes the entire experience quite memorable. Greyhat is an extremely linear game, there aren’t different paths that you can take, everything only has one specific solution or way forward, and I honestly think that, because of that, there isn’t much replay value here. With that said, the game does really provide you with a lot of value for just one playthrough, due to the wide variety of scenarios and situations that you’ll find yourself in. Besides the gameplay, the story is also one of the game’s strongest features, but delving into that might ruin the experience for those that haven’t played the game. In any case, Greyhat’s plot is quite engrossing and captivating, and I honestly couldn’t stop thinking about this game until I reached the end and found the answers that I was seeking. If you’re into narrative-driven games such as Papers, Please, Death and Taxes, Not For Broadcast and Booth, then I highly recommend you pick this one up whenever you have the chance.

If you’re into narrative driven games such as Papers, Please, Death and Taxes, Not For Broadcast and Booth, then I highly recommend you pick this one up whenever you have the chance.