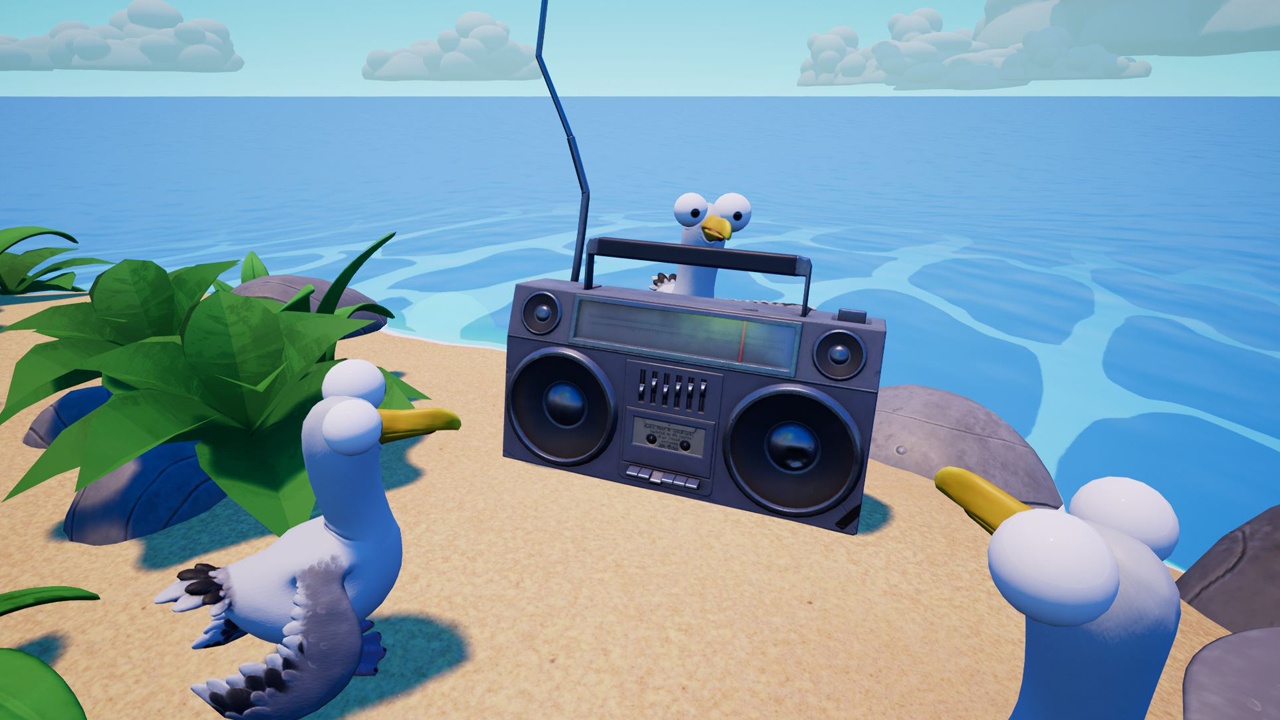 When the PSVR was announced it was at a time when there was a lot of hype around virtual reality coming to gaming and what it could achieve. Unfortunately PSVR has been incredibly slow to get going, sure there is a steady stream of games coming out regularly, but there aren’t many popular or notable games at the moment. Other than AAA titles with VR compatibility (Resident Evil 7 for example), games made specifically for this hardware tend to feel like demos rather than finished products. The closest we’ve actually come to the finished article is something like the Inpatient or Super Hot but in the end they were short experiences that were more introductions into what could be great games. This isn’t to say that there isn’t a place for short PSVR experiences, ones that are enjoyable and play with the dynamics of VR and move controllers, while making good use of a small area – this is where Island Time VR fits in.

This isn’t a game that relies heavily on a strong emotional story, don’t expect it to be the next Castaway. The game starts with you on your boat with a little island in front of you. There is a wheel and a button that makes a sort of honking sound, the only part that does anything is a very enticing accelerator that you must pull resulting in a shipwreck and starts the game. Every play session starts the same so you’ll get used to that starting scene. Next you wake up on the small island you could see(funnily enough it’s the same size as the recommended play area for PSVR)  alongside a talking crab that instructs you on what you have to do, from there all you have to do is survive for as long as possible.

It may feel like Island Time isn’t going to hold your hand, it doesn’t tell you the controls or how to play but the crab doubles as a guide/comedian.  Although he is helpful sometimes I felt his intervention got in the way of the exploratory nature of the game. While trying to figure out the different things you can make and what you can use them for he would just jump in with not too subtle guidance. How to play and survive isn’t that hard to grasp so such direct help felt unwarranted, if anything vaguer hints would have been more welcome, giving you a sense of achievement than just following orders. 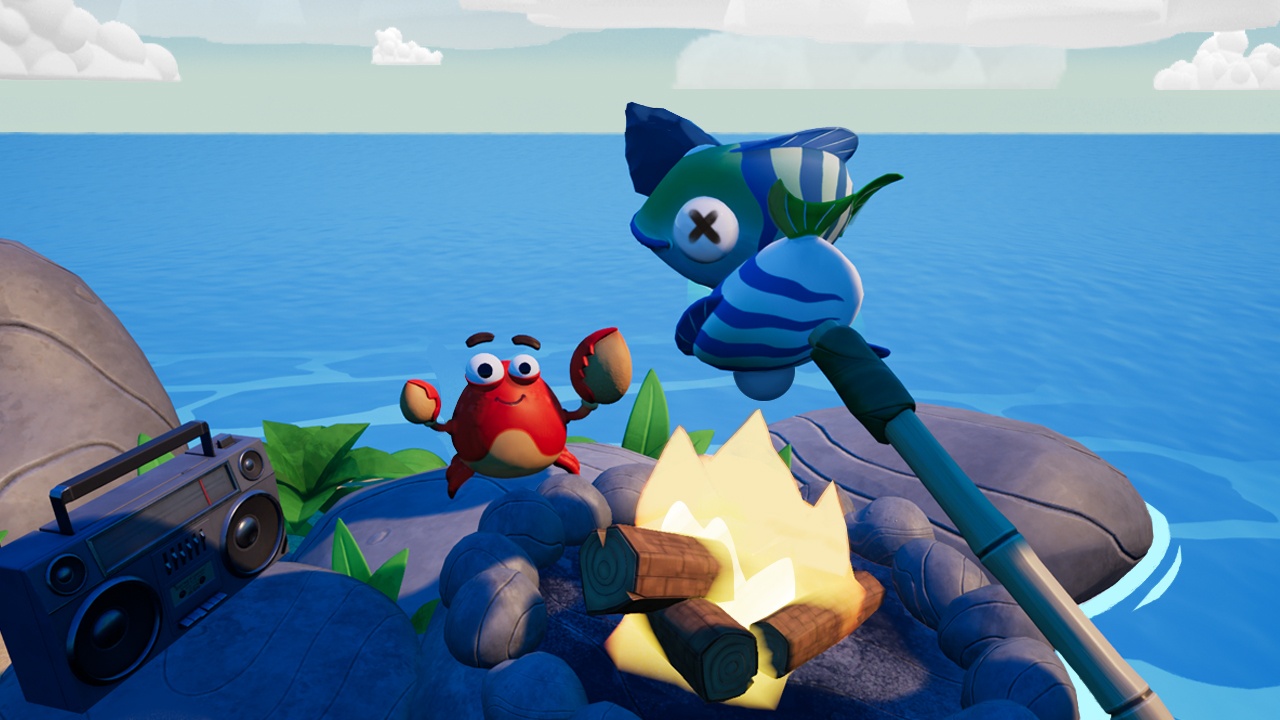 How to keep track of your health is simple – on your wrist you have a watch with a heart that shows your health and beeps as you’re close to death. The metre slowly runs down as you starve and can be affected by other hazards such as being set on fire (unsurprisingly).

There are a few basic things you need to survive; there is a little pool in front of you where you can catch fish for cooking, there’s a tree next to you with coconuts on it that you can crack and drink/eat and there’s a spot where bamboo grows that you can use to make tools. All of these replenish on a cycle, the crux of the game is to make use of these items as to always have a source of food available to you. As well as what’s readily available on the island every couple of minutes care packages wash up on the island, to start off they contain a few logs and pieces of rock for starting fires and making tool, as you get further into a playthrough you start to get different items such as a skull and a monocle. A big part of exploration is experimenting with creating tools, this can be anywhere from the helpful such as spears to the more strange like a piece of bamboo with a log on the end that you can flail around.

It feels great to play, whacking coconuts off the tree with a spear and catching them mid-air and cracking them on a rock. Stabbing fish as they jump in the air and catching several in one go etc. On my first couple of runs however I wasn’t managing anything near that impressive, instead I spent a lot of time by accidentally knocking coconuts in the sea and trying hard to pull them back so I didn’t die straight away.

One thing you’ll do a lot during your time with the game is die. Thankfully the developers made dying more than just starvation. There are a few ways you can kick the bucket like eating poisonous fish or getting a bit too close to fire and sometimes it can be quite a funny experience. Although a rooky error involved rocks and logs can be frustrating during a lengthy session, the first few times I by accidentally set the island/myself on fire it was funny in a shocking way, desperately trying to stick my hands into the sea or waving them frantically in the hopes of putting the flames out. 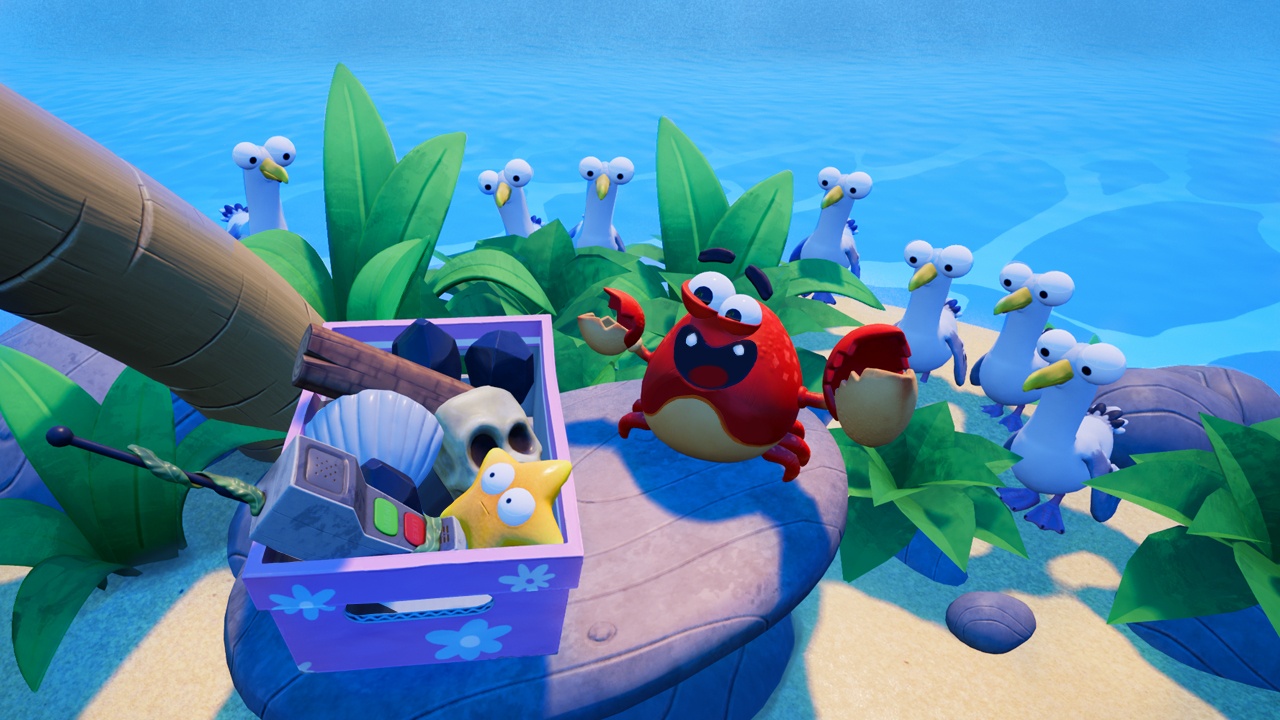 There is actually a platinum trophy for this game which was a welcome addition, and the trophy requiring the longest survival is 20 minutes so that’s the best the game expects of you. Although I got close to this I didn’t manage it, it’s the kind of game that requires a lot of practice but after several goes on the run I needed a break

Graphics are colourful and cartoony, this style is easier to get right than a more realistic approach but it looks fantastic in VR. Music really isn’t an important part of this game. There are a few tracks featured that play through a radio that is physically on the island with you. The tunes are generic Hawaiian/island music more akin to muzak than anything substantial. It helps lift Island Time from a bland silent experience, although isn’t likely to impress you, if anything you might not even notice it’s there. You can destroy the radio and this would put an end to any boring songs.

Contrary to real life, just surviving isn’t enough of a motivator. It just felt like there was something lacking, if the game was ever expanded having a primary goal to get off the island would be a welcome addition – such as collecting so many items for making a raft. There’s also only the one game mode, no other options and no online leaderboards.

Island Time is short and sweet, the kind of game you’ll play when friends come round or as a showcase as to how fun PSVR can be. With more added to it, it could be a triumph, but in its current state its worth a try but don’t expect to find your new favourite game.