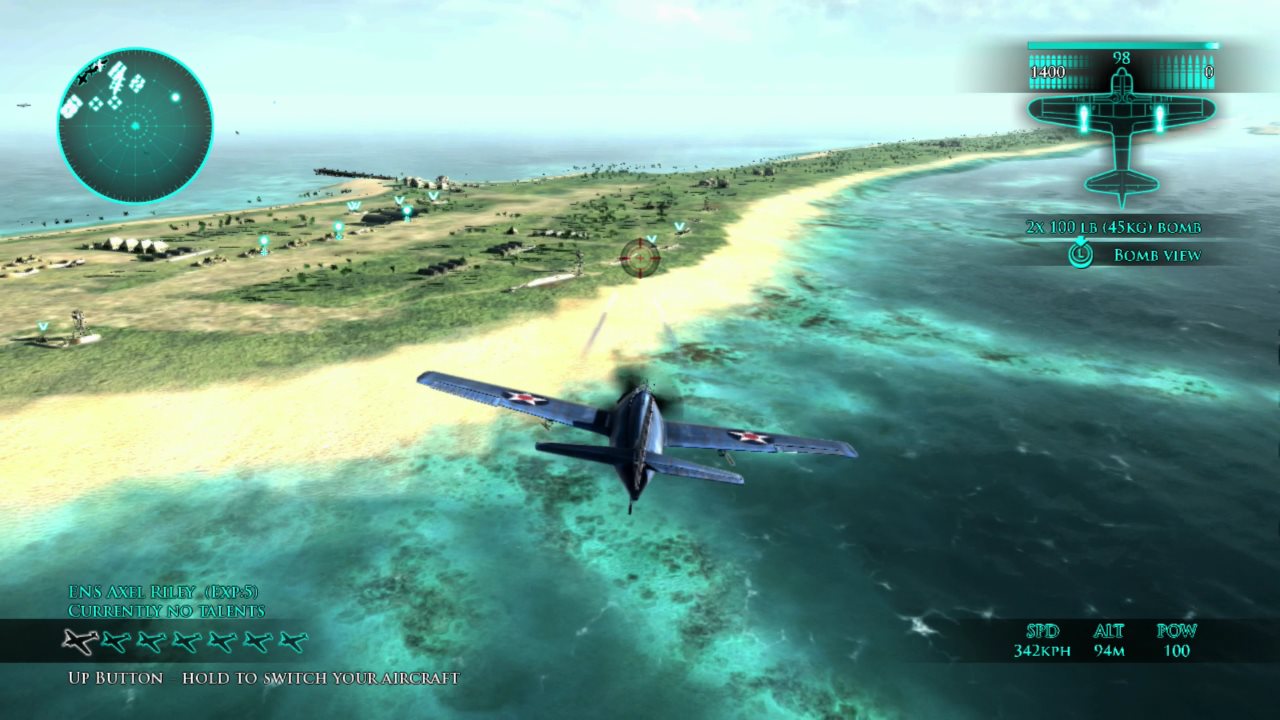 If, like me, you wait with abated breath for the next aerial combat simulator to make a flight path for the Nintendo Switch, two come along at the same time. Coming hot off the heels of the release of Air Conflicts: Secret Wars, GamesFarm s.r.o and KalypsoMediaGroup also bring us the follow up title, Air Conflicts: Pacific Carriers. Using the same formula as the first title, this game gives us a whole new scenario within the historical settings of the Second World War, plus builds on the original blueprint to bring us a more complex mechanic; yet one that is sublimely easy to get into and offers a more interesting and immersive experience that Secret Wars.

Whereas Air Conflicts: Secret Wars took place over the skies of North Africa and Europe, Pacific Carriers follows the events of the war between the United States of America and Japan with the conflict that took place over the skies of the Pacific. This time around, you step into the boots of Admiral Lucas Stark of the U.S. Navy as you fight in a series of scenarios that sees you defending the onslaught upon Pearl Harbour to helping in the battle to liberate the Southern Oceans of the Pacific. However, with two campaigns on offer here, you can also play as Admiral Hideaki Hashimoto of the Imperial Japanese Army and take the fight to the Americans.

The main premise of the game revolves around the aerial conflicts of the time, taking place over infamous locations such as Midway, Pearl Harbour and Wake Island. From a selection of eighteen various aircraft, from the Japanese A6M Zero to the American F4U Corsair and F4F Wildcat, you partake in a series of sorties that sees you dogfighting against the enemy, lining up for bombing runs and sinking convoys in a series of torpedo attacks. In terms of mechanics, this title flows very much within the mold of its predecessor, Secret Wars; especially within its very satisfying details in aircraft models, scenery and general flight mechanics. 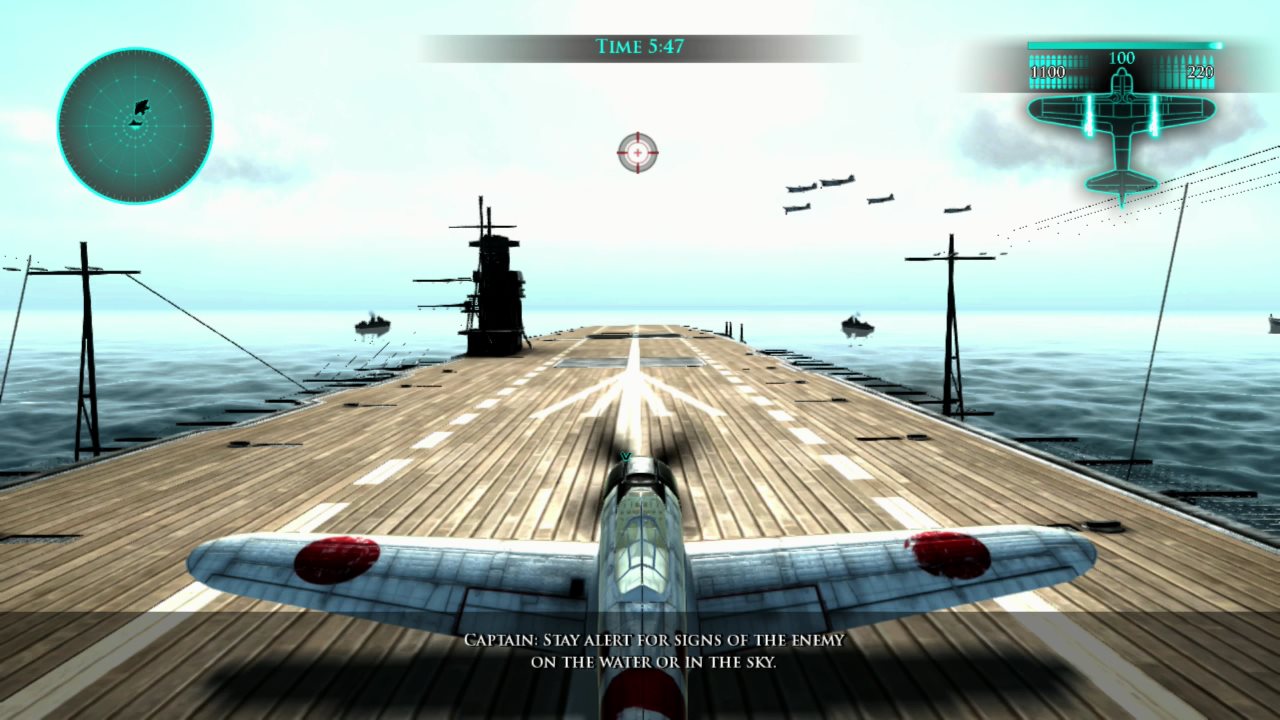 Each of the campaigns on offer follow the exploits of two of the opposing forces mightiest aircraft carriers. Between missions, the story is pushed along by a series of sepia-styled footage that promotes a good feeling of the era in which you are fighting in. As opposed to the campaign of Secret Wars, Pacific Carriers holds a much more engaging experience; one of the many features that promotes a good sense of immersion within the offerings of the title. Much of the gameplay of the first title followed a lonesome affair; often with you being a sole pilot within the much larger expanse of the war. In terms of scale, it was a title that never really got the the balance in the larger scale of the conflict around you.

Pacific Carriers, however, contains more elements within its make-up to add a touch of depth to the proceedings and allows the player to become more invested within its gameplay. The main difference here lies within the ability to fly as a squadron, rather than a lone pilot. Although you fly a single aircraft within each of the missions, once you receive a too much damage, or simply run out of ammunition, you can switch to another aircraft, activated with the D-Pad, within your squadron and carry on the battle from the cockpit of another flyer. It essentially works in a similar mechanic to having a pre-determined number of lives; once all of the aircraft within your squadron have been used up, then it’s game over. 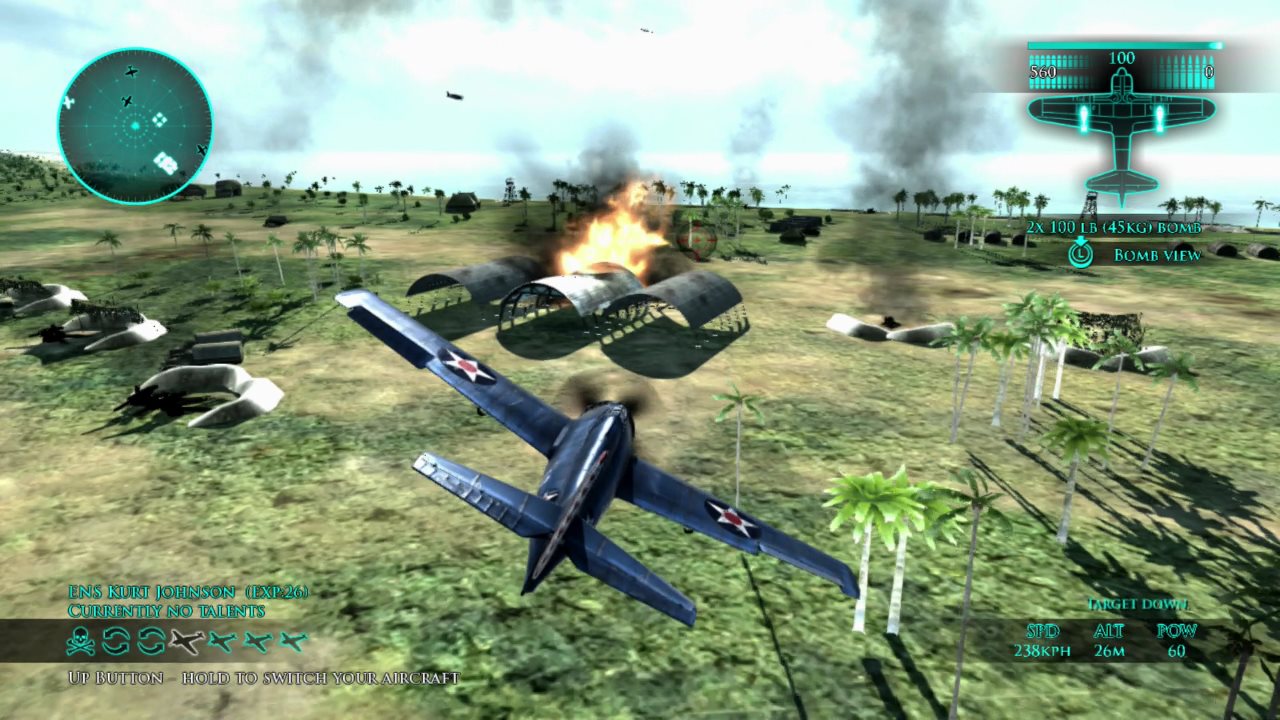 It’s a clever mechanic that adds a touch of depth and strategy to the gameplay, plus also adds an immersive quality as the fate of your fellow pilots is highlighted at the end of each mission. Pilots killed or survived is given within a summary; bringing a sense of belonging or camaraderie within your squadron as you progress through the campaign. The presentational values of this game also build on from Secret Wars, with a much more pleasing aesthetical look and palette to the surroundings. Clouds, sea and land-based locations are nicely rendered, while the aircraft models are nicely detailed and accurate in the representations.

As well as the extensive campaign options within the game, you can also partake in a series of customisable dogfights and take to the skies over a series of online multiplayer battle and skirmishes. These follow along the same template as the original title. However, some of the objective-based games within the online elements revolve around the carriers of the main campaign. Sadly, I encountered the same problems as Secret Wars within this element of the game and failed to find any active lobbies in which to try out these modes, despite reviewing this title a couple of weeks since its release. With luck, this is something that will change over time.

Overall, Air Conflicts: Pacific Carriers provides a very satisfying experience within the genre of aerial combat games. It builds on the first release within its series, yet still retains everything that made the first game so good. With an added layer of depth and playability, this is the more enjoyable game of the two. Satisfying flying mechanics, detailed modelling and a pleasing aesthetic all build to produce what is easily one of the best offerings of combat flight simulation on the Nintendo Switch. A lengthy campaign will ensure many hours of playability and as long as the lobbies become more populated, can offer a game that will last over the long-term. If you’re a die-hard combat enthusiast, especially one with an interest in World War Two aircraft, then both of the games within series come very highly recommended. However, if you only have the option of being able to choose one, then Pacific Carrier is where it’s at.

An aerial combat game that soars with its presentation, mechanics and gameplay.