Within minutes of playing it was clear that RTO could not keep up with the initial excitement the game description invoked in me when I first researched the developer and the game. Described as a “…side scrolling FPS survival horror game with permadeath” RTO manages to fail on every level. From awful visuals to almost nonexistent audio and repetitive mechanics this game has little to offer for its 7GBP price tag. 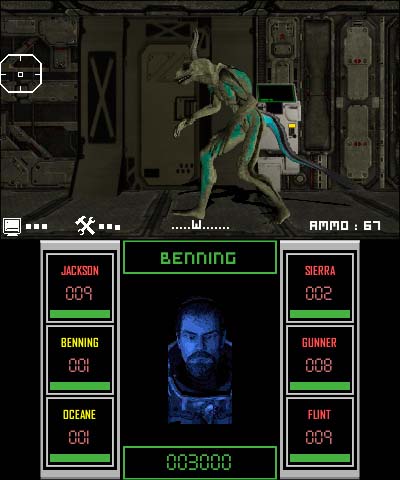 The premise is simple: A team of soldiers have been sent to fight evil Reptilians (why not?) who have taken over (RTO: Reptilians Take Over) your home base. I wish I could add more information but unfortunately that’s all there is. During the course of the game the narrative does not really change neither did my interest to invest anything into RTO’s story. Story and mission briefings are being conveyed in an equally bland way: Via text on the top screen with no artwork or any other type of visualization and no music or notable sound effects. Sparsity is a theme throughout Reptilians take over.

After starting your first mission you are confronted with repetitive game play and bare bones mechanics. You control your character from a first-person perspective without any forward or vertical movement. The soldier is basically standing still and turning in circles with the top screen displaying the room from the first person perspective and a small compass showing the direction that you are facing. You can either move with the shoulder buttons or by moving your cross-hair all the way to the edges of the screen, which is the clunkier option. Interaction is limited to some static objects in the room such as doors, fuse boxes or prisoners, who can replace fallen team members. 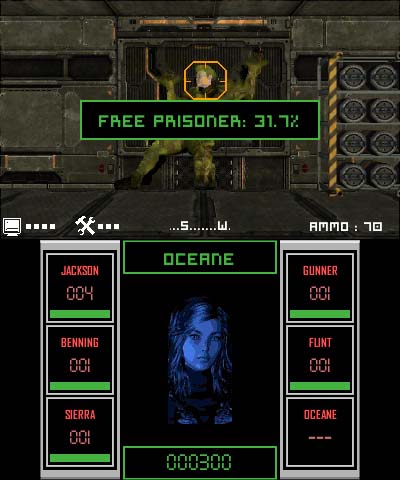 You can freely choose any team member by a simple touch on their profile picture on the bottom touch screen and every soldier has different stats like stamina, repair skill or hack speed but they seem to be rather redundant. A safe bet is always to choose the soldier who carries the most ammunition in order to kill the Reptilian who occupies a room where an action is required. Every action in this game, apart from shooting, is represented by a loading bar which, depending on your skill value, fills up faster or slower.  Reptilians will spawn randomly in any room occupied or not. If you share a room with said fiends, you will be notified by an audio cue and you can then decide to shoot your enemy or to conserve ammunition and simply leave the room.

Some rooms have map terminals which are vital in your quest to not get lost as the the rooms are mostly looking the same and have no standout features to make navigation easier. This is where the player will face the main mechanic of the game: You’ll need the map in order to advance. After accessing a terminal the map screen shows room numbers connected by lines which represent the exits/entrances to a room. Your character basically only moves from one map room to another not minding anything in between apart from your mission objectives (repair fuse boxes, unlock doors, free prisoners). It is also worth mentioning that each terminal only shows a small part of the whole map. I was tempted to take notes on a piece of paper. This might sound nostalgic to old school RPG fans, but believe me, it wasn’t. Every mission comes down to moving between map terminals to figure out where you are and not to get lost. 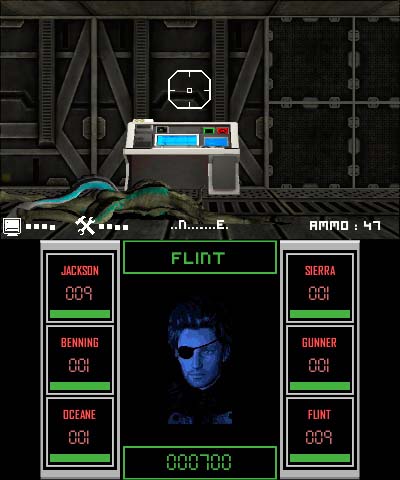 The art direction in RTO is equally repetitive. There are almost no animations apart from the randomly appearing Reptilians which actually look different but move and behave the same when shot. The rooms are kept in a grayish colour scheme and don’t change much as you progress through the game, which is a huge deal as mentioned before. The bottom screen shows your character portraits with names and room numbers which is useful because even though you can share a room with your team members they are never visualized.

RTO is not even trying to convey the notion of being a game worth playing. It is uninspired, repetitive, visually not appealing and I can’t think of one reason why you should invest any time or money into nuGame’s title. If you are interested in FPSs for the 3DS you should invest your money in games like Moon: Chronicles or Metroid Prime: Federation Force.