Ah real-time strategy games, how I’ve missed you. In the 1990s I happily lost large chunks of my teenage years resource gathering and building armies in games like Warcraft, Command & Conquer, Total Annihiliation, Warcraft 2 and Starcraft – however as my gaming interest turned to consoles (which aren’t well-suited to RTS games) I left the genre behind. This of course means over the last few years I’ve missed out on key titles Supreme Commander, many Command & Conquer sequels, Warhammer 40K: Dawn of War, Company of Heroes and Starcraft 2. Playing Meridian: New World then could be the litmus test of whether my love for RTS games can be revived.

While most of the titles I’ve namechecked already have been high-budget affairs from large development studios, Meridian: New World is admirable for the fact it’s an indie title and primarily created by one man – Ede Tarsoly. You wouldn’t know it’s a solo project from playing the game though with impressive graphics, cutscenes, and a full campaign featuring voice actors. Admittedly the standard sci-fi setting is very familiar but this tale of colonisation of a new planet does at least have an engaging story. Unfortunately the lack of resources does show in the fact that while RTS games traditionally have at least two distinct sides/races with their own units and abilities, the enemy in Meridian are humans with the exact same vehicles and buildings that you do.

However the visuals in Meridian certainly haven’t suffered despite the almost solo development. Landscapes look lush and interesting while well-animated units (bearing more than a passing resemblance to the Terrans of Starcraft) navigate and shoot at each other – with distinct graphical flourishes for the various weapons. Admittedly the available maps are fairly small and there is no ability to zoom or rotate your viewpoint but it is impressive – and is well complemented by some functional cut-scenes. Unfortunately the prettiness of the terrain masks one major fault – it’s difficult to tell which paths of land can be traversed which can lead to frustration. The main campaign, as is tradition for RTS games, slowly introduces you to the various units and instructs you on how to play the game. It provided me with at least 20 hours of gameplay, but does start off too easy for the first half before getting frustratingly difficult towards the end. More interesting is the story element as you’re able to stroll around your command ship and talk to your crew and staff between missions, as well as read up on the game backstory and play through battle simulations. I was actually caught out a bit as I didn’t realise conversation choices and making sure to take advantage of the simulations was important to build up loyalty for the end of the game, and while an innovative feature I would have preferred if it had been made more obvious.

Another interesting feature is the earning of XP and unlocking of various commander abilities that can be utilised during missions. These range from healing units, damaging enemy units, increasing attack rate or spying on enemy bases. These abilities are all accessed from a single, recharging enemy bar and careful but frequent use of them is the key to victory – mainly because the gameplay is otherwise fairly limited. The enemy AI quite weak and mainly consists of a drip-feed of attacks on your base that you just need to withstand while building up a large force to steamroll into the enemy base – a familiar tactic from RTS games of the 1990s. There are other recognisable traits here with the gathering of the crystal-like resource ‘shardium’, tech-trees for unlocking new units and abilities and the usual sci-fi complement of mechanised walkers, tanks and air units.

A degree of individuality has been introduced with the ability to choose which of several different weapons each unit can be fitted with during construction which in theory allows for a multitude of different unit variations. However as it’s not possible to identify or select units based on their armaments it’s difficult to make coordinated use of them. Any attempt at grouping is also undermined when units charge out of the safety of your base to engage the enemy (there is a ‘hold position’ option but that can potentially be more risky). The inability to repair buildings is a strange decision as well, apparently to encourage attacking play and reduce the effectiveness of defensive turrets. Other missing features are less understandable – it’s not possible to instruct units to follow, patrol or set waypoints for example. This is perhaps understandable given the limitations of the development team but still detracts from the experience. 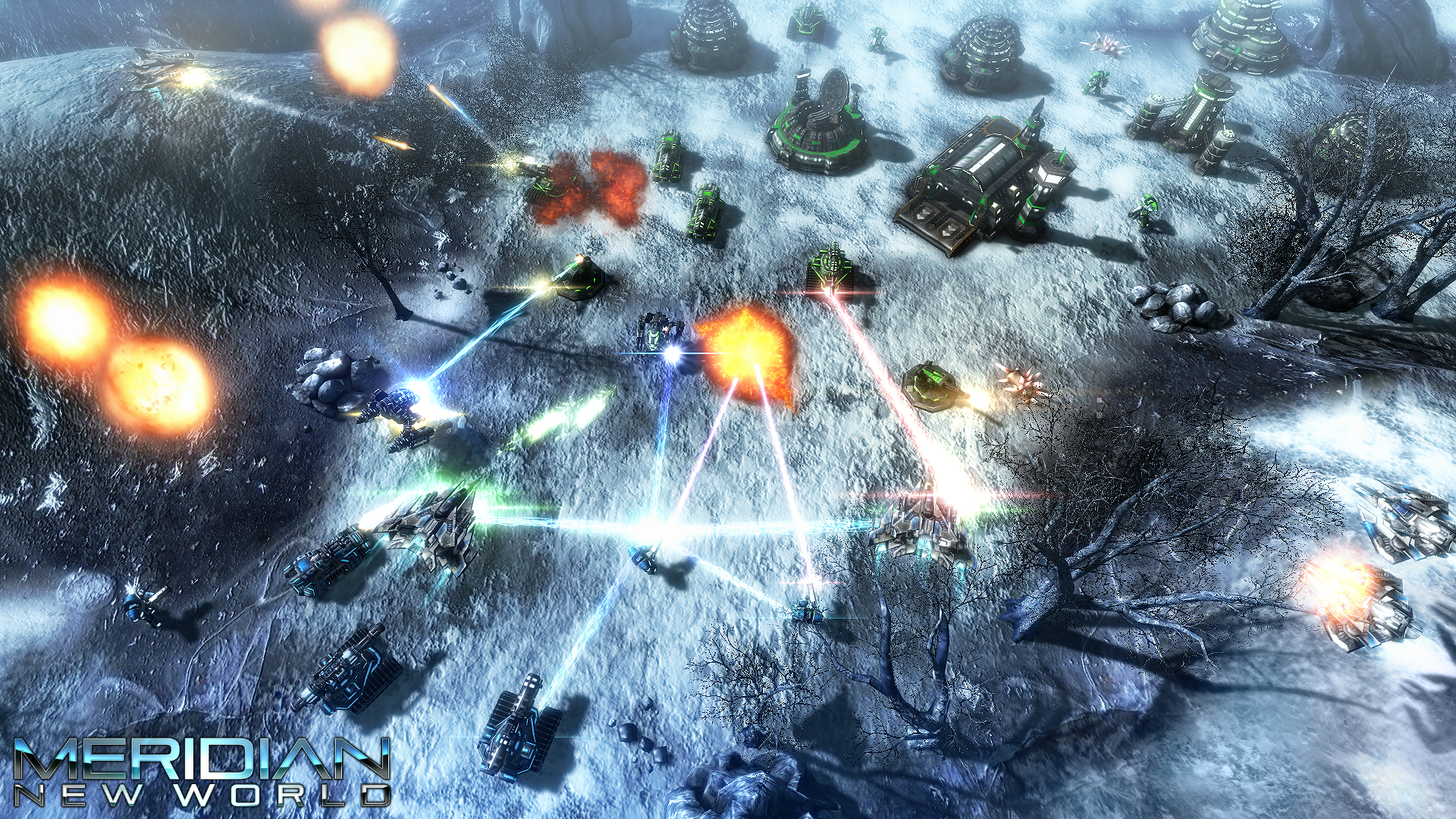 The biggest omission however is the lack of multiplayer, skirmishes can only take place against the AI (and even then only up to three opponents). Given the lack of satisfaction from playing again the AI in Meridian this is pretty damning and greatly takes away the longevity – after completing the campaign you’re unlikely to persist beyond a couple of skirmishes. The implementation of multiplayer would definitely have improved the whole experience and with a supportive community could significantly affect the success of an indie title like this.

As a final point I do need to praise the audio of Meridian – the voice acting is decent and certainly helps to make the campaign engaging, while the ambient music (which verges between rocking and soothing) really took me back to playing Command & Conquer.

Overall Meridian: New World is a fun enough game but lacking in a number of areas and without the multiplayer options lacks the longevity you’d expect from a RTS title. The accomplishment of a solo developer (plus friends) in producing a title this polished can’t be overstated though – watching the credits is a brief experience and I doubt there’s another game out there where voice actors outnumber programmers! I can honestly say my interest in RTS titles has been revived, but not fully satisfied, after experiencing the charms of Meridian. Even as I type this I’m pondering which of Company of Heroes or Starcraft 2 I should invest in first…