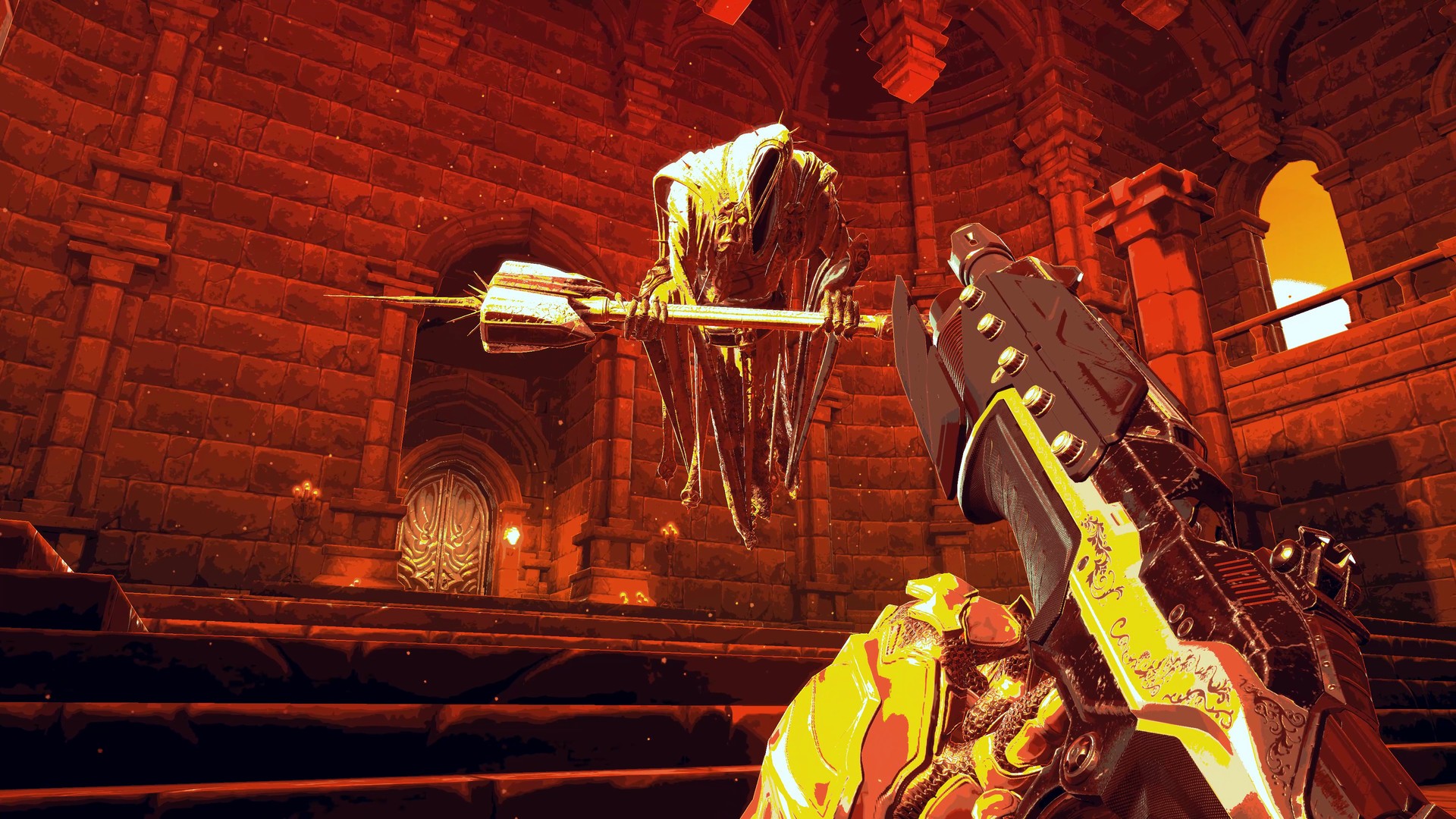 BPM: BULLETS PER MINUTE is the first game to be released by Awe Interactive, a fairly new indie studio. If you have never heard about this game before, its name should give you a slight hint of what to expect. If that’s not the case, fear not, because BPM is quite possibly one of the simplest games to explain and understand in theory, but in practice, it’s brutal and relentless.

In short, BPM is a rhythm-based FPS dungeon crawler where shooting, reloading, jumping, dodging and using abilities must be done in sync with the beat of the game’s amazing soundtrack. However, some actions can be performed at each half-beat, not everything must be done in sync with each full beat. This is conveniently demonstrated in the game’s rhythm bar that is just around the crosshair. Furthermore, the game also provides a series of indicators based on incoming enemy attacks, if you should dodge in a specific direction, jump, or if you should just get out of sight to avoid damage. Given that the enemies also attack in sync with the beat, this is just a really cleverly designed UI that serves as the foundation for BPM’s stellar gameplay.

Although the game offers both an Easy and Hard mode, even playing on Easy might feel quite challenging during your first hours. Luckily, you can customize the accuracy of the rhythm detection, if you want it to be stricter or looser. There’s even an option for automatically syncing the rhythm, in case you’re really having trouble, although this disables the score multiplier. If you manage to master the game on its own, you can even go the extra mile and disable certain crosshair elements such as not showing you the rhythm or dodge indicators to make the game more challenging, or you can just dive into one of the five challenge modes for extra fun.

BPM features a roster of 5 different characters, each with their own unique starting loadouts, but you must unlock them first by completing specific dungeons and defeating the final boss. The major difference between each character isn’t merely their starting weapon, which you can only carry one at any given time, but also their starting health and armour. For example, the starting character, Göll, starts with a weak pistol, 100 HP and no armour, but the second character that you unlock, Freyr, starts with a revolver (one of my favourite weapons), 150 armour points but has no starting health points. Each character completely changes the way that you play the game, especially during the beginning of your playthroughs, unless you’re playing with Odr, the last unlockable character, who starts with a sawed-off shotgun and literally has no health or armour, if you’re hit you’re dead. 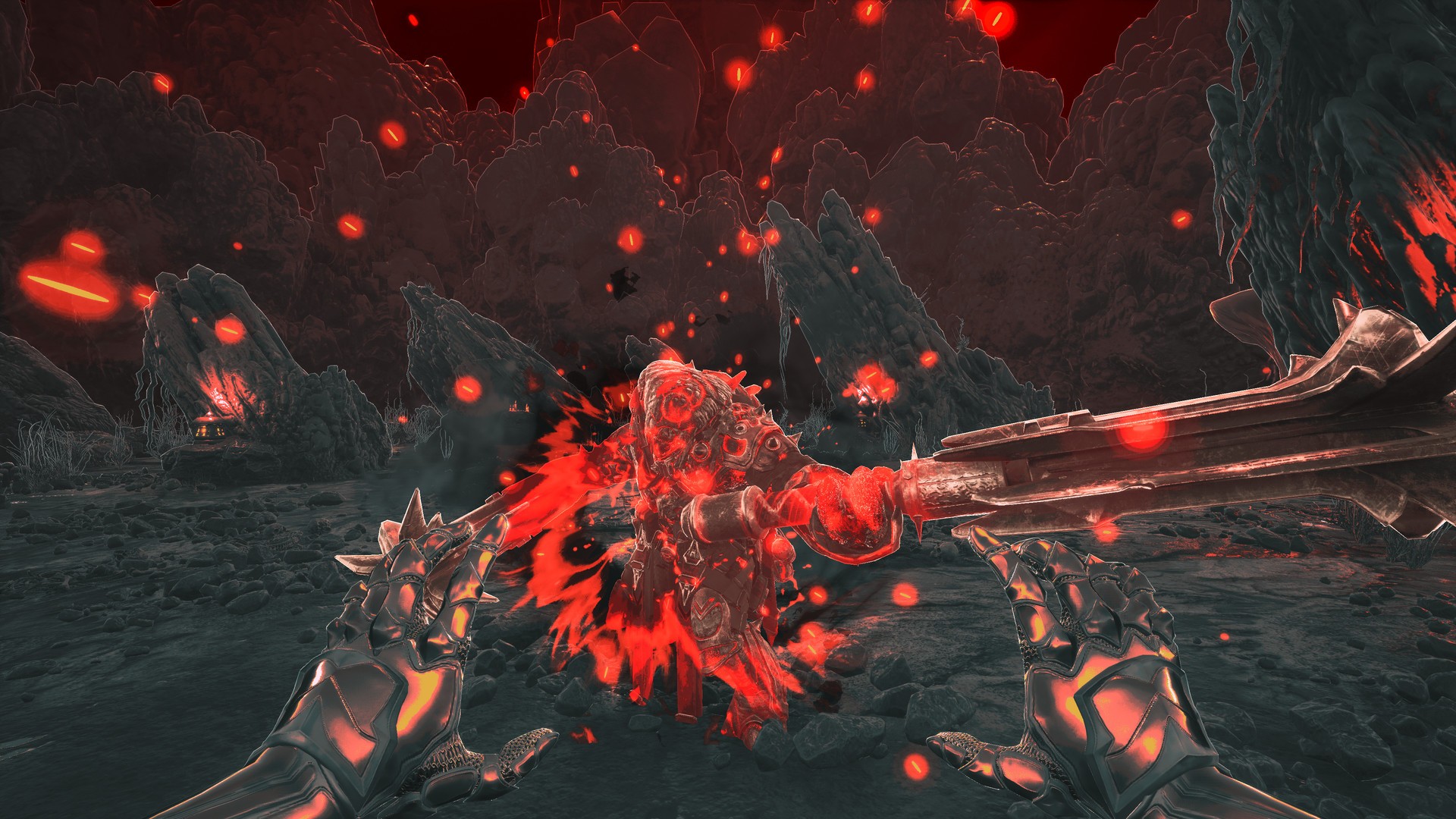 Just like each of the characters, every single weapon in BPM is unique and requires a different timing to both fire and properly reload it. For instance, the revolver is one of my favourites, not only because of how good shooting it feels, but also because you have to manually reload each bullet into the cylinder to the beat. It’s challenging at first, but it feels so satisfying when you put them all in, in quick succession. There’s also a Burst SMG, a pump shotgun, a lever-action rifle, a minigun, a rocket launcher, a grenade launcher, a raygun, an energy cannon, amongst a few others, and they behave quite differently.

Despite all that, BPM’s weapons and characters are only part of its brilliance, as the game is much more interesting thanks to all the items that you can find. There are a few consumable items, but the ones that can really change the tide of your playthroughs come in the form of equipment which go into four different slots, head, chest, hands, and feet. There are over 40 of them, and they can grant you double shots, penetrating shots, double damage, explosive shots, an extra life, a critical hit multiplier, damage reflection, amongst many other things. With that said, a lot of the item descriptions aren’t very clear as to what they do, and I actually had to do some research on the Steam forums and the wiki to learn about the effects of certain items. On top of all that, your characters also have different stats that you can upgrade throughout each run, thus increasing things such as weapon range, damage, and movement speed. While there are items that increase these stats, most stat upgrades will come by donating coins at shrines that you can randomly find in the rooms.

BPM follows the standard dungeon crawler room system, where you have to explore each dungeon floor one room at a time, clearing all enemies in order to proceed to the next one. While most of the rooms will have all sorts of different foes for you to deal with, there are also shops, item rooms, challenge rooms, banks where you can store coins for future playthroughs, and challenge rooms where you fight waves of enemies in exchange for random rewards. Although each dungeon is procedurally generated, this is done by randomly picking from a series of pre-made room layouts and arranging them in random order. As a result of this, you’ll quickly start to see the same layouts. This might not necessarily be a bad thing for some people because due to the game’s challenging nature, you can quickly learn how to move around each room faster and how to best avoid enemies, but I’d still say that the game could use more diverse and vertical rooms to spice things up. However, BPM has a few room and dungeon modifiers that seem to have a random chance of triggering, which from my experience doesn’t seem to be that high. These include making the level dark and giving you a flashlight so the player can see in front of them, to making the level icy which causes you to slide across the floor, to having reduced gravity, to even inverting the camera and the controls.

Likewise, just as it is in regards to level layouts, there also isn’t that much enemy variety. Nonetheless, I’d say that this is much less noticeable than seeing the same rooms over and over, simply due to the fact that each enemy represents a unique threat on its own. Enemies not only have weak spots that you can target for extra damage, but they all have different attack patterns which you need to learn quickly if you want to survive for long. This is particularly important when it comes to the bosses at the end of each dungeon, as their attacks can quickly put an end to you. Each dungeon has its own unique boss, although some bosses do reappear later in the form of mini-bosses, and each dungeon type also features unique enemy types. This is done so that enemy difficulty escalates as you progress through the game and become more powerful. 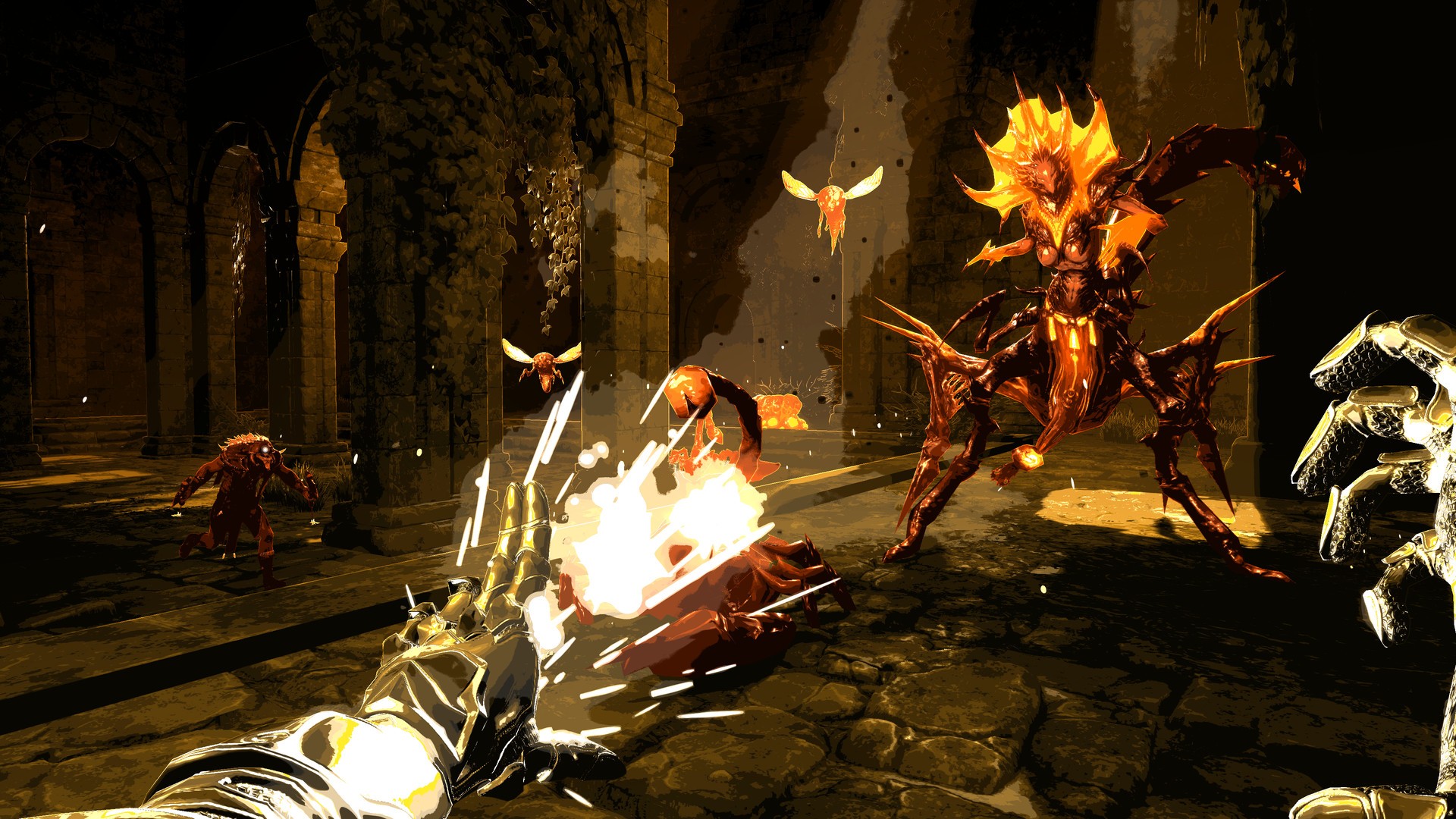 For a rhythm-based FPS, BPM’s soundtrack and weapon sound effects are nothing short of outstanding, and this only elevates the game’s excellence even further. From the cheerful music that swoops in once you enter the item shop that is run by a giant bird which heavily contrasts with the rest of the tracks in the game that are much more hectic, to the reload sounds and weapon shots that perfectly accompany the beat of the music, everything about BPM feels like an elaborate symphony. In BPM, the soundtrack and the rhythm-based shooting are definitely the stars of the show, and while BPM’s visuals aren’t its main attraction, I can appreciate the aesthetic, but what I really love are the reload animations. Each weapon has a unique one, but for me, nothing beats the gentle pat in the pack that the player gives the revolver whenever it picks it up. It just gets me every single time.

At the end of the day, despite its repetitiveness, BPM is a blast to play. I only got my first win, on Easy, when I was about 3 hours into the game, and as soon as I finished the final boss, I felt like every single failed attempt led to that moment and was worth it. Even on Easy, the game is tough as nails, but it’s an ongoing learning experience, not only in terms of game knowledge that you accumulate as you try out all the different items and weapons, but also in terms of raw skill, because you’ll slowly start to become more proficient. Enemies that would initially completely wreck you begin to become trivial and nothing more than ants in your path to victory. The game also heavily encourages strafe jumping due to the way that its movement system works, as doing so completely changes the way you can move around and avoid enemy attacks as you keep on gaining momentum and moving increasingly faster.

Despite being an FPS, I’m sure that there are many FPS fans that won’t enjoy this, and the same thing goes for fans of rhythm games. This is simply because the game is quite challenging, but a great deal of its charm comes into fruition when you finally start to be in sync with the beat and slaying hordes of enemies. Unfortunately, I think that this is just one of those cases where you really have to try the game out to see if you’ll actually enjoy it, even if in theory you think you would. In any case, in spite of all its flaws, Awe Interactive have truly done a great job in executing their idea and I totally recommend anyone who is even slightly interested in BPM to check it out.

BPM is a rhythm-based FPS dungeon crawler where shooting, reloading, jumping, dodging and using abilities must be done in sync with the beat of the game’s amazing soundtrack.