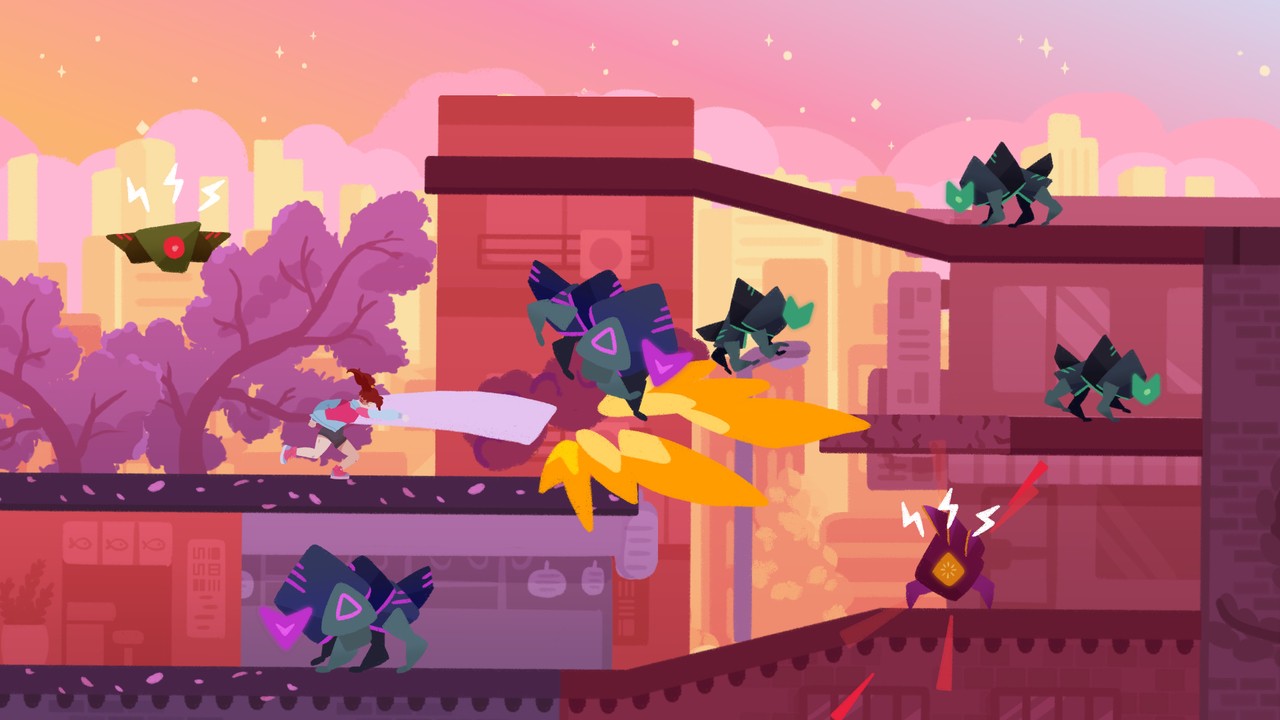 I love a lot of these indie titles that are coming out on the Nintendo Switch eShop: Refreshing Sideways Puzzle Ghost Hammer, It Came From Space and Ate Our Brains and Aviary Attorney: Definitive Edition. It’s not so much of an extravagant name, but Super Crush KO from Vertex Pop sounded like something worth looking at. When I saw the name, I imagined either a Candy Crush Saga type game (thanks, advertising) or some text-based adventure following on from the success of a popular manga. Well, it’s neither of those. It’s a beat ’em up.

Ok, not entirely a beat ’em up as the levels are mostly of the platform variety; jump up/down a level to take on enemies et al. and also as an evasion technique for when things get hairy with the inevitable bosses, who are surprisingly easier than you’d think. Your foes of the game are hordes of alien robots, courtesy of the antagonist, Ann. She’s also a robot and has stolen your cat, Chubbz – the motivation of the story, and the legal reason you can go about and smack some mechs about the chops.

Earlier I mentioned that it isn’t based on a manga. While I’m not so versed in what’s hot or not with the medium, I don’t believe Super Crush KO is based on one and is a unique title in itself, but the presentation involves a few anime-style cut sequences and title cards, that is quite typical of the genre. Overall, Super Crush KO is a tightly packaged story, even if it lacks much depth in the way of characters and story arcs. It’s a cat rescue mission in the end. I say leave ’em. 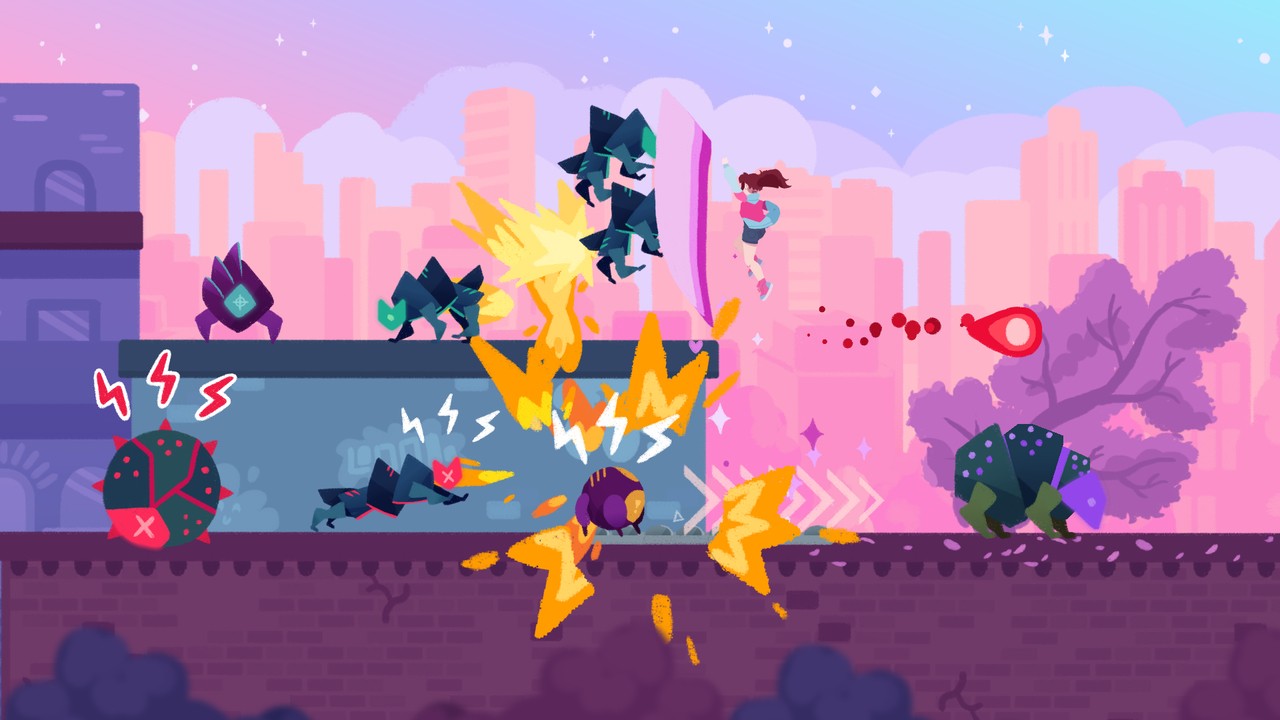 The controls are intuitive, and one where button mashers can rejoice as the combos you accumulate are relatively easy to pull off, though you are rewarded with switching things up. Everybody knows, mixing up a variety of hit combos is the spice of life, for this sort of platformer at least. In addition to the variations of punches and kicks, your character, Karen, can also fire a Rapid-Fire Precision blaster for long-range attacks. Simply press ZR to perform the move. It’s a nice touch for shooting an enemy in advance to then connect up a punch-kick combo and also encourages a little hovering similar to the Devil May Cry series. Perhaps the polar opposite in art style. Anyway, points mean prizes and the prize here is anonymous (ish) boasting.

At the end of each of the 20 levels, you’ll get a performance breakdown and awarded a score for how you did. Much like Metal Gear Solid or the classic Resident Evil titles, scores will be given a letter where A is a top score, but S-rank is the best. Should you get a decent score, rather than be confident in your gaming ability as is, you can earn the bragging rights of posting to the online leaderboard. It’s a good addition as it adds a bit more competitive play to this solo effort, but for fools such as myself, it’s a little bit of shaming and inadequacy of being unable to rank at a respectable level.

One of my go-to titles on the Switch is Katana Zero and the mechanics sort of resemble that, only without the obvious slow down of time. Visually it’s very different to the samurai time-bender, and I’d say the choice of colours aren’t far off from said Candy Crush Saga type games, only Super Crush KO has more evident pink, purple and teal-like hues. It’s pleasing on the eye and disregarding the similar colours, it’s not too difficult to see what you’re doing, even when the screen gets populated with loads of enemies. 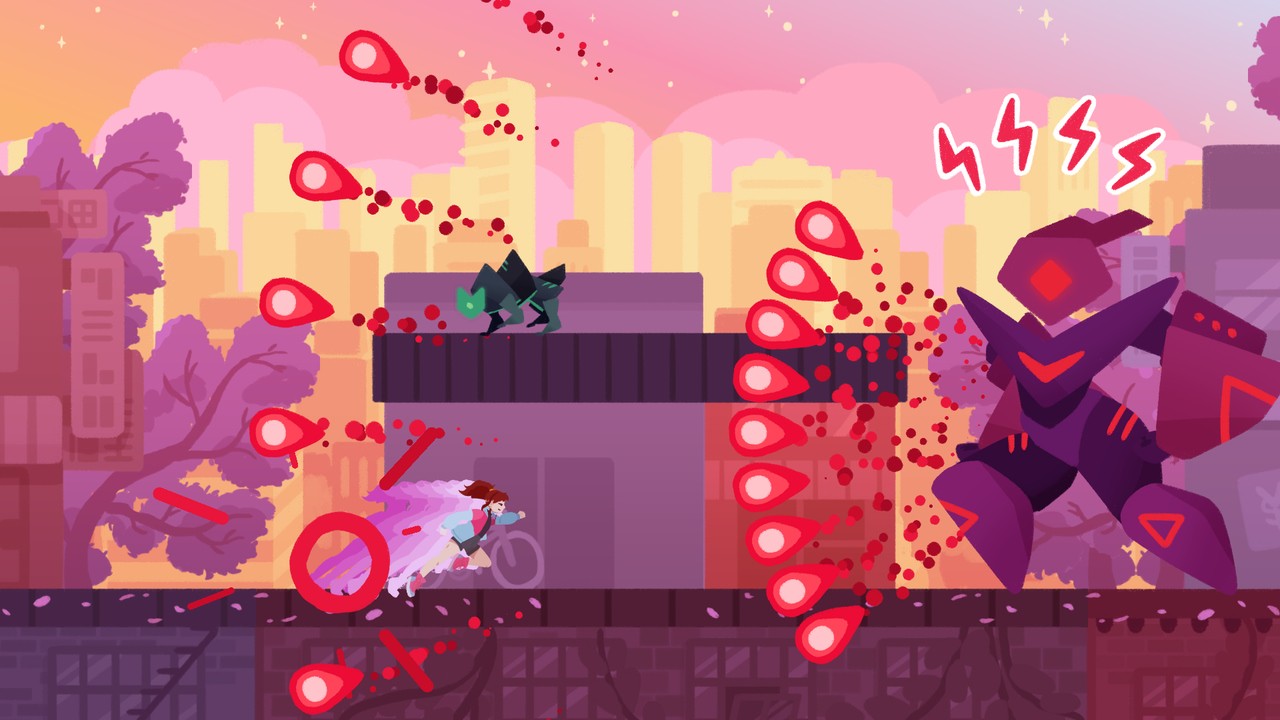 It’s worth clarifying that Super Crush KO is a 2D platform game. I wouldn’t say that it is retro or cutting edge with the visual approach. Utilising a ‘flat’ design, there are no obvious shading techniques or outlining of the characters or backdrops. If it weren’t for the parallax effect backgrounds, the game would feel very flat as there isn’t any depth of field, and despite having a lot of straight edges, the feel is very soft. Don’t take this as too much of a negative, however. As I said, Super Crush KO is neither overwhelming or confusing, and in terms of game design, that’s a good thing. And for the record, I love the colours and aesthetic choice. It makes a change from the generic approach typical of mobile/eShop titles.

There’s no spoken dialogue, just a series of supporting sound effects that are absolutely fine and serve their purpose. The musical score is ‘nice’. How you interpret that depends on your taste. I did find it a little repetitive at times, but it’s certainly not the candy-pop infusion it could have been and would have warranted the game being played on mute. Not with Super Crush KO, however, it’s nice, like I said. Ok, I think what I’m getting at is it could have been a bit more bold to coincide with punching an Autobot in the face (clarification: no Transformers appear in this game).

Overall, Super Crush KO is a pleasant game. Karen has reluctantly been drawn into a world of violence (the alternative wouldn’t have made for a good game) and she handles it how her character is portrayed: with quiet confidence. As you can expect, this isn’t a gorefest or gratuitous game in any way. There are just some things people will do for their cats. Not me, I’m a dog person, but I’ll make the exception for Super Crush KO as it’s worth ploughing through the somewhat short story to rescue Chubbz.

Not the hard-hitting date simulator I had hoped for, but Super Crush K.O. is a pleasant platform beat ’em up that is enjoyable to play and because of the controls and inoffensive tone, suitable for a wide audience. Even if you think girls stink.