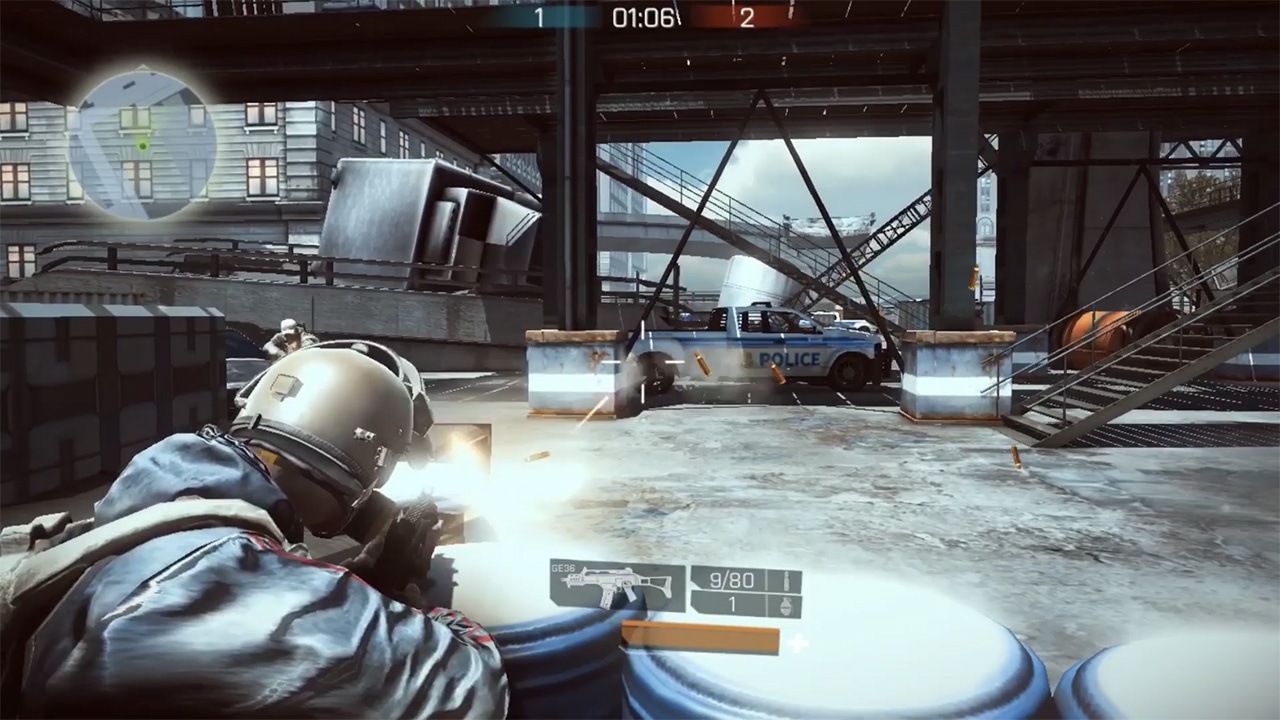 Before the days of the Battle Royale, many gun-toting gamers got their fixes with military or sci-fi shooters such as Call of Duty or Gears of War. They each contained satisfying mechanics in the meatiness of their weaponry or in the implementation of cover fire, but most of all, they provided hours of entertainment through Team Deathmatches, hordes, free-for-alls and a wealth of unlockable styles to tailor-make your own personal loadouts. Despite the popularity of the Battle Royale-style of play, these quick-fire skirmishes still maintain a popularity amongst hardcore gamers to satisfy the needs of our itchy, little trigger fingers. However, it’s still a form of gaming that is particularly light when it comes to the Nintendo Switch, but Forza Games and Troooze’s Bullet Battle: Evolution has now fired a release and hopes to scratch that annoying little itch on the tip of my finger.

Despite its descriptions, trailers and screenshots though, the weight of boots on the ground in this military-style tactical shooter makes it a distinctly light affair. From the start, a series of alarm bells begin to ring with a host of options and choices that just feels inherently wrong. The game begins with giving you a choice from three different styles of operative classes: Assault, Sniper and Medic. However, on closer inspection, you’ll immediately notice that the loadout for each respective class is identical. Each starts out with the basic M4 assault rifle; even the sniper doesn’t have a sniper. As for the medic, well this class remains hidden behind a paywall that needs to be bought with in-game currency before its unlocked. The trouble is though, they still posses the same, basic M4 rifle and as for reviving fallen comrades, well the other two classes are more than capable of providing life-saving resuscitations; making the class of medic a largely redundant one.

Anyway, having chosen you’re desired class, you’ll notice that there’s quite a vast array of different weapons that you can equip, but only if you have reached a desired level and possess the funds with which to unlock their specific paywalls. You even have room for a secondary weapon, but none are available to you. So, with a handful of bullets of just one grenade, you set off to go to war. The game offers three styles of game mode: Team Deathmatch, Capture and Survive. These modes are played across three maps; one map for each of the game modes. You don’t get to choose what game mode you play, you simply head off blindly into war; it doesn’t even work on a rotation system with whoever may be in your lobby, you simply play one game of whatever mode is chosen for you and then return to the main menu. 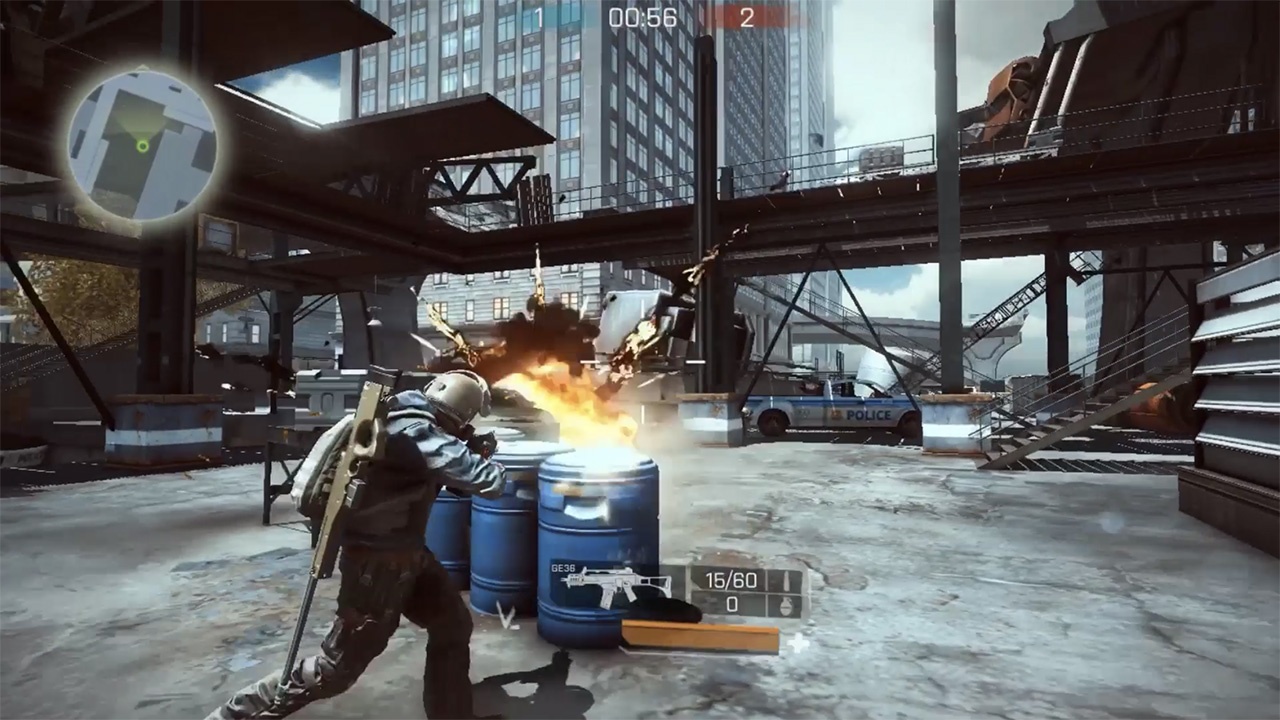 Each of the game modes caters for up to eight players online across a series of servers that aren’t localised. One minute your teaming up with the Americans, whilst the next you’re lagging it out with the Japanese. There’s no continuity with whom you play or where, creating a frustrating experience for anyone whose internet doesn’t run as fast as you will eventually from this game. Some of the graphic models are nicely detailed, but performance takes a severe hit. However, you do have the option to play the game in performance mode, which although producing a smoother experience, does create a more uglier palette to fight against.

Despite whatever mode or option you choose to play, one thing that the game can’t escape from is the severe lack of polish in any of its mechanics. Movement is decidedly dodgy, as is the aiming (unless you get to eventually unlock a scoped weapon), melee is simply hit-and-miss and grenade throwing contains the same sort of luck as a pinball machine (with luck, your explosive will bounce off the scenery and land you a multiplier. If not, then its simply a wasted ball). The way each of the combat units behave, both in movement and aiming produces a game that is more Call of Drunkeness than it is Call of Duty. It’s simply a nightmare that produces a very frustrating experience.

This is all further hampered by some environmental disasters, with collision detection and clipping being laughably iffy, allowing you to run through walls into the, out-of-boundaries, interior of a building; only to find that you can’t get out again or diving into the water to become stuck within the scenery (thus making you a sitting duck) or simply remaining in the water unable to get out so that you eventually drown or get shot. You may be fighting against other troops, but the battle against the environments are a far worse enemy. It, unfortunately, just all adds up to produce a very lacklustre experience that contains more of an element of luck than it does skill. 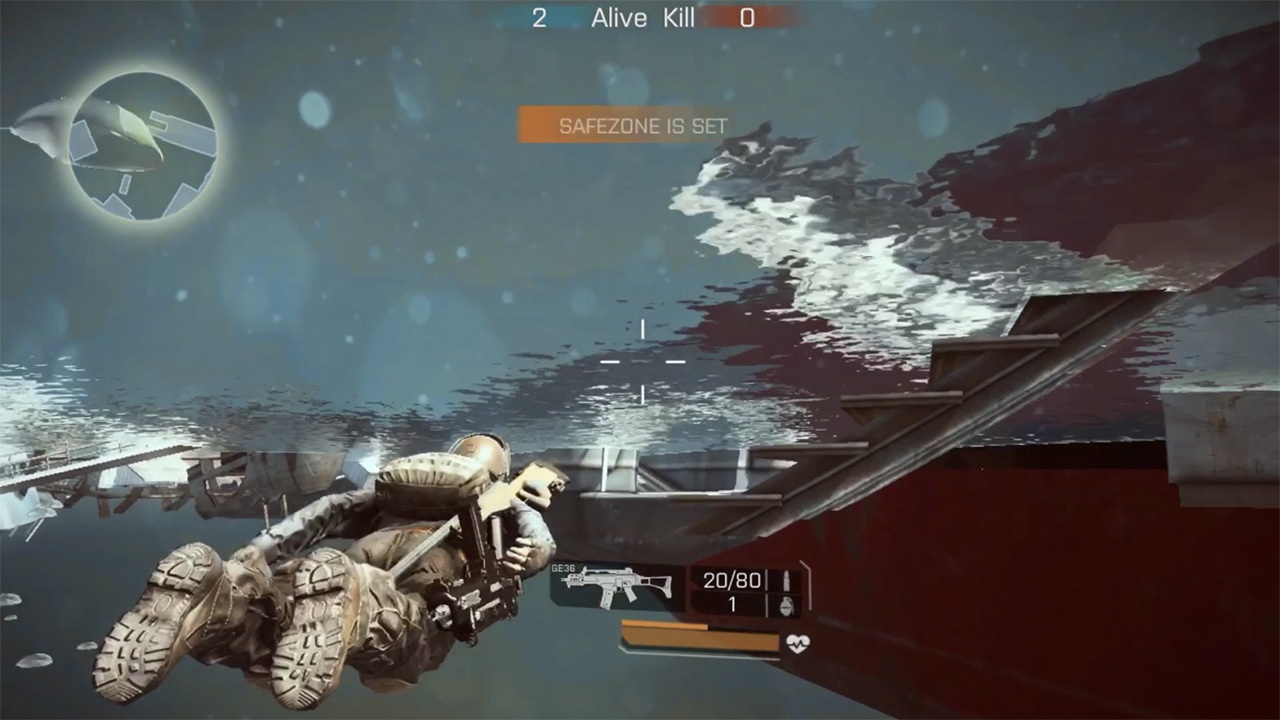 Each of the game modes play out as they should, with Deathmatch pitting two teams against each other, Capture, which tasks you in controlling certain areas within the map and Survival which plays like an eight-man Battle Royale, with the last-man standing being the overall victor. This is all well and good, however, you begin each bout with a total of sixty bullets and your magazine holding ten (at least within the basic model of your starting loadout). Once this ammo has been spent, there’s no way of replenishing your stockpile; leaving you run around the map with no bullets, no grenades and no hope. The only way you can recover your arsenal is by dying and respawning. Not the best mechanic in the world, I think you’ll agree.

There is a cover mechanic at play, allowing you to hide behind the scenery, but alas, much of the scenery that should provide you a hidden shielding simply does not contain the mechanic to allow you to do so; leaving you to roll around as try and find a piece of scenery on which to stick to. In fact, during my playtime with the game, the best tactic was to simply flood the spawn point of the enemy and remain there, picking them off as they respawned with their back to you. Again, not the best mechanic in the world and one that simply frustrates the enemy into leaving the game. Find yourself on the winning side though and you gain XP and in-game currencies that can be used to unlock further weapons. However, the rewards are so measly that it will take a lifetime to unlock everything that the game has to offer. It can be argued that it provides a good deal of long-term gameplay, but after a couple of games, you simply won’t want to play the game again.

Overall, Bullet Battle: Evolution presents the worst of what’s available on the Nintendo Switch. If there’s one thing I don’t like, it is to run any game down, as I, for one, truly appreciate the work that has to go into developing the games for our enjoyment. If the truth be told, I have even been known, at times, to over-score some titles as I always try to find the good in them. In this game though, I simply wasn’t able to find anything and it severely pains me to have to say this, but Battle Bullet: Evolution takes the coveted crown of being the worst game I have ever played on Nintendo’s machine. For its current pricing, there are a wealth of much better quality titles for the same price or less, so do yourselves a favour and save your hard-earned pennies for something that is going to be much more worthwhile on the rainiest of days.

Bullet Battle: Evolution has all the right ingredients to serve a dish best served cold, but ends being burnt by a plethora of broken mechanics.