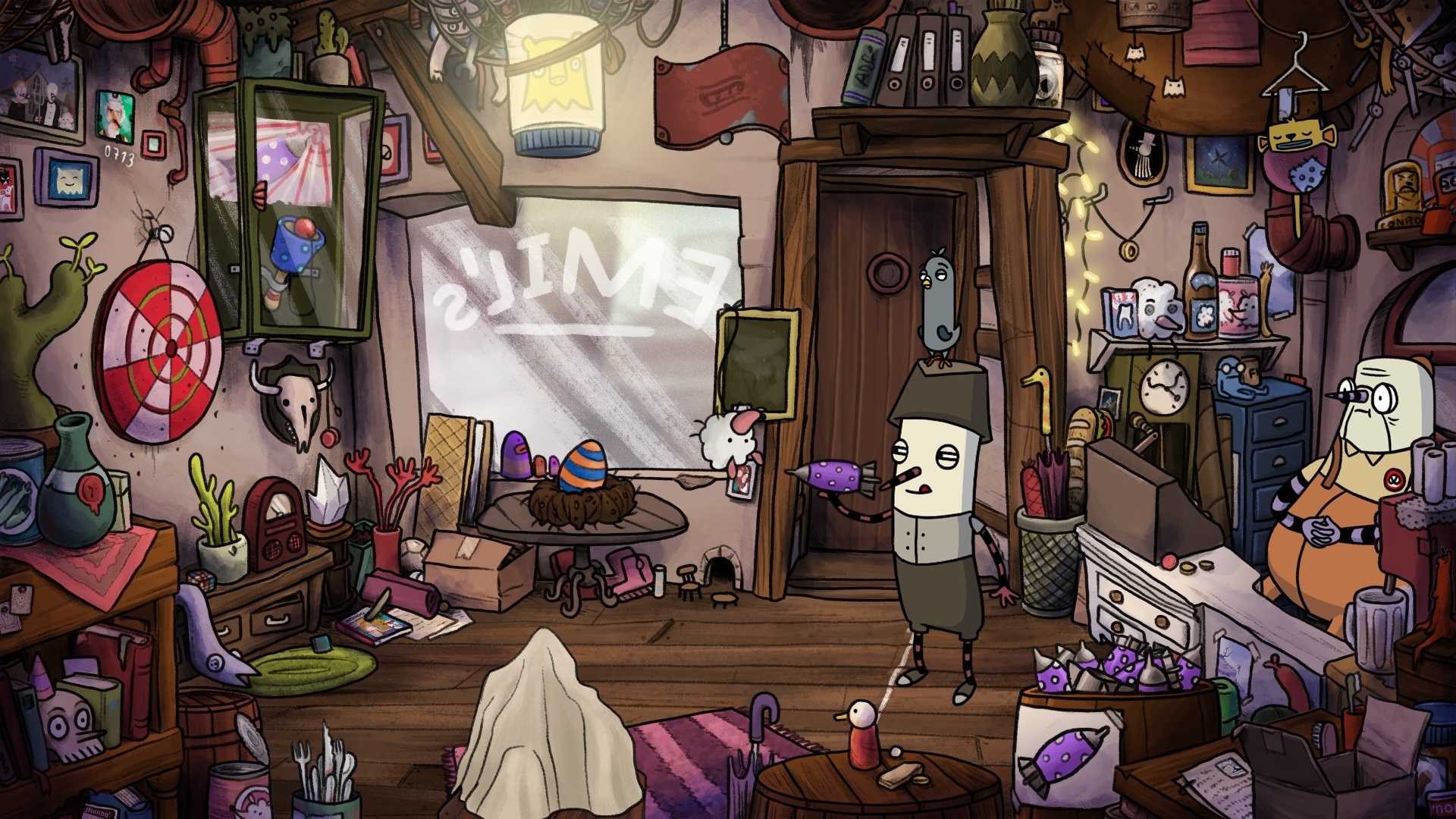 The current year seems to be a hot bed for adventure games, as since January, we’ve seen a mass of adventure titles launch on multiple platforms. Titles such as Batman: The Enemy Within, Ken Follett’s The Pillars of The Earth, and Thimbleweed Park, have all launched within weeks of one another, and they’ve all presented gamers with something different. However, with the exception of The Pillars of The Earth – which was borderline flawless – all adventure and point-and-click titles which have launched in 2017, have featured a myriad of issues. Batman: The Enemy Within Episode 2 was swarming with technical and visual flaws, whereas as Thimbleweed Park, was full of rather questionable design choices.

No game is perfect, and certain flaws and imperfections are to be expected, especially when the title in question has been developed by Telltale Games. However, the recently released The Inner World – The Last Wind Monk, has somehow managed to feature not one set of negative features, but nearly all of them. But the most jarring flaw of them all is related to the title’s visual façade, and to its animations to be exact, as those, are well – rather underwhelming. Npcs are stuck in endless loops which repeat into infinity, and certain animated objects of the scenery, such as the fly-eating plants from the beginning of the game are simply missing frames in their animations. 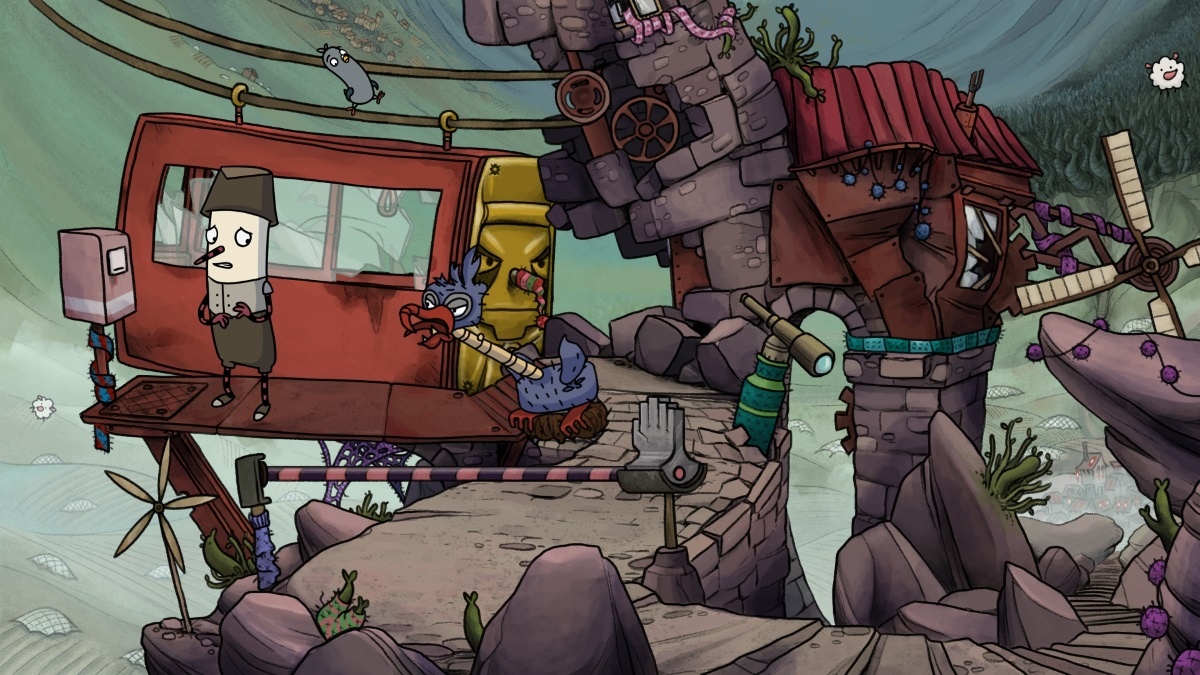 The Inner World – The Last Wind Monk, is clearly not a high budget title, and things such as underwhelming animations are to be expected. But in some instances, the character animation is downright lazy. For example, when one wins the darts competition within one of the stores, he is given a reward in form of a toy, but in order to retrieve it, he/she has to reach for it directly. And as the desired objects is hanged on a wall, one would expect the protagonist to step up, open the case, and pull the toy out. But what happens in game, is much simpler, and much more ridiculous. The box within which the toy is contained simply swings open, the protagonist reaches into the thin air, and the toy simply disappears, and shows up within one’s inventory.

The Inner World’s animations are jarring, but not matter how bad they get, they are nowhere near as problematic as the title’s archaic gameplay design – which is just above the monstrosity which can be found within the confines of Thimblweed Park. And that’s only because the playgrounds of The Last Wind Monk are confined to miniscule, singular areas, whereas Thimbleweed Park was taking place within an entire town, and therefore backtracking, is not as tiresome in The Last Wind Monk. But it is still uneceessary, especially after titles such as Ken Follett’s The Pillars of The Earth have proven that it is possible to make a captivating, and challenging game without mechanic’s straight from the 1980’s.

Core gameplay design of The Last Wind Monk, to many, will prove to be problematic, but thankfully, the puzzle design manages to sweeten the rather bitter taste, which is caused be the first impressions. And that’s because all in-game puzzles are not just interesting, but also challenging and entertaining enough in order to suck one in for the long run. And due to the title’s rather impressive competency within this department, it is possible to endure, and in certain instances ignore all its shortcomings. Because once one gets stuck in into the proverbial meat of the game, he/she will completely disregard the aforementioned archaic gameplay design, and the laughable at times animations, which with time come across more like a hack comedy skits, rather than lazy execution. 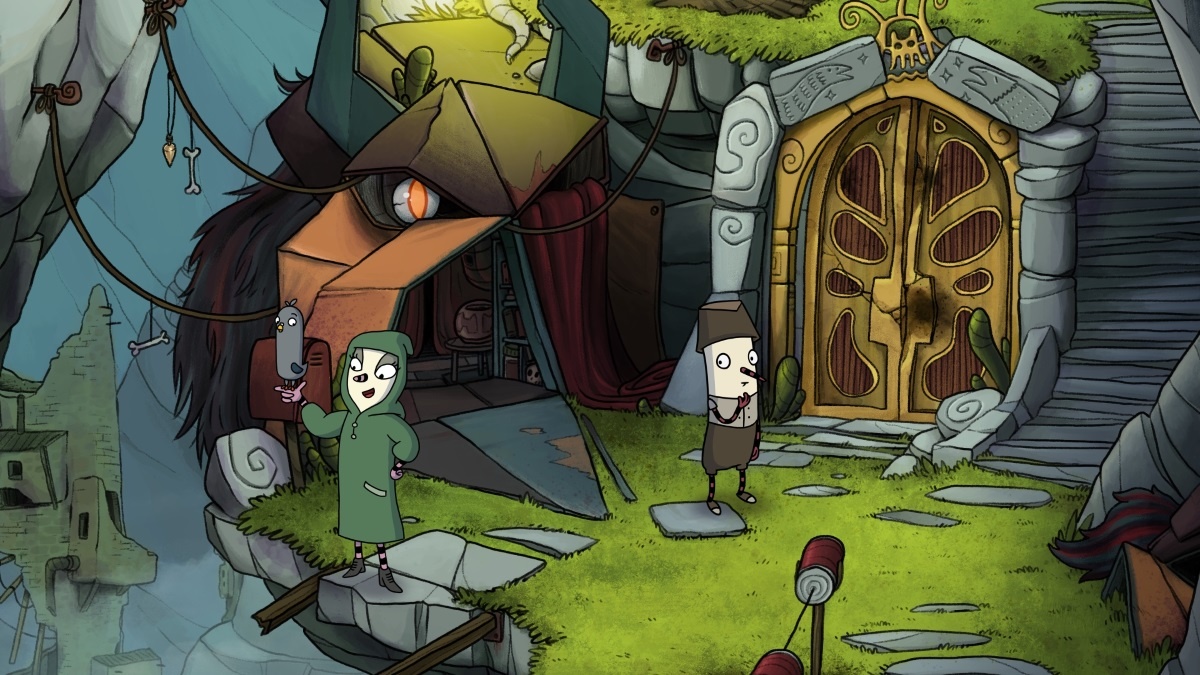 The Inner World – The Last Wind Monk, is a point-and-click adventure, meaning that first and foremost it has been built with the mouse and keyboard in mind. And this is visible right from the get go, as the console control scheme comes across a labour-some, and clunky. As the developer behind the title has solely concentrated on the use of the face buttons, and the left analogue stick, ultimately rendering the right stick useless. And in my opinion, doing so, at least in this case, was a tremendous mistake, as instead of moving the cursor with the right stick – like in other games of the genre – player is required to approach every object, and input a combination of buttons, as unlike in titles such as The Enemy Within actions are not bound to select face buttons, but have to be chosen with square, selected with the right stick or d-pad, and ultimately confirmed with X.

This particular title’s control scheme is eerie to say the least, as not even a single component of it is either enjoyable, beneficial to the player, or reasonable from the perspective of ergonomics. But considering all the other features which it contains, one could say that in this particular instance, it is par for the course. And while many will disregard it for this very reason, it is worth reiterating that The Inner World – The Last Wind Monk, is an adventure title, and many are likely going to play it in short bursts over a prolonged period of time, meaning that its flaws will not affect them as much as me, as I’ve played for multiple hours in a single sitting. And while I found the title to be hotbed for dubious game design, and overall lack of effort, I don’t feel like I’ve wasted my time playing it, as after walking away from it, I felt satisfied and in some ways, entertained.