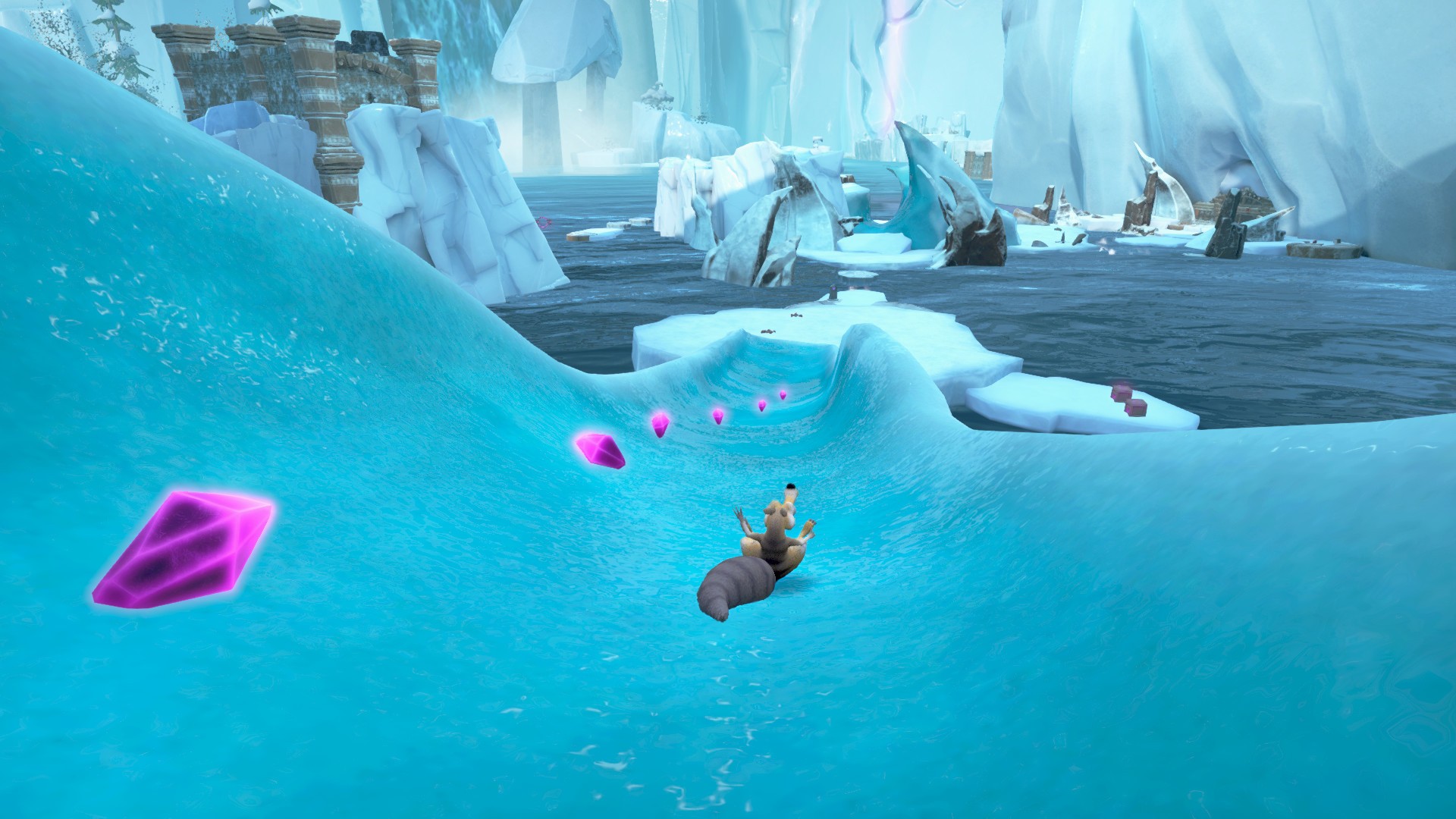 As a family man, I watch a lot more animated films than i used to. Franchises like Hotel Transylvania, Toy Story and every Disney movie ever I will watch at least once across any rolling two month period. One of my favourite’s is the Ice Age films, they balance the right amount of interesting story with silliness that the best cartoons are remembered for. So when Ice Age: Scrat’s Nutty Adventure appeared, it wasn’t just my son who was excited to see what calamities Scrat will get up to.

For the uninitiated, Scrat is a sabre-tooth squirrel from the Ice Age films who has spent most of them trying to find and keep a series of nuts, generally he loses most of them but he carries on the struggle. In Ice Age: Scrat’s Nutty Adventure, a mysterious mechanism in an ancient Scratazon Temple has taken and locked his most important possession i.e. a nut. The only way for Scrat to get it back is to take part in an adventure to discover and return four legendary Crystal Nuts which are scattered at the four corners of the island which Ice Age: Scrat’s Nutty Adventure tales place.

Ice Age: Scrat’s Nutty Adventure is a 3D platformer aimed at children. There are four main sections taking into account some of the locations seen within the films. At the beginning Scrat can jump, roll, climb, fight and throw, as you progress you will unlock other abilities like the double jump and slingshot manoeuvre that will allow you to reach previous unreachable areas. There are a variety of enemies to run past or beat such as dung beetles, crabs and meerkats (i think, could also look like mice). At the end of each section there is a boss, when beaten you will find one of the Crystal Nuts and be transported back via a funny fmv sequence back to the temple where the Crystal nuts need placing. You can die in Ice Age: Scrat’s Nutty Adventure, if you fall into the water or lose all your health, luckily you just respawn at the last checkpoint, checkpoints are quite plentiful. 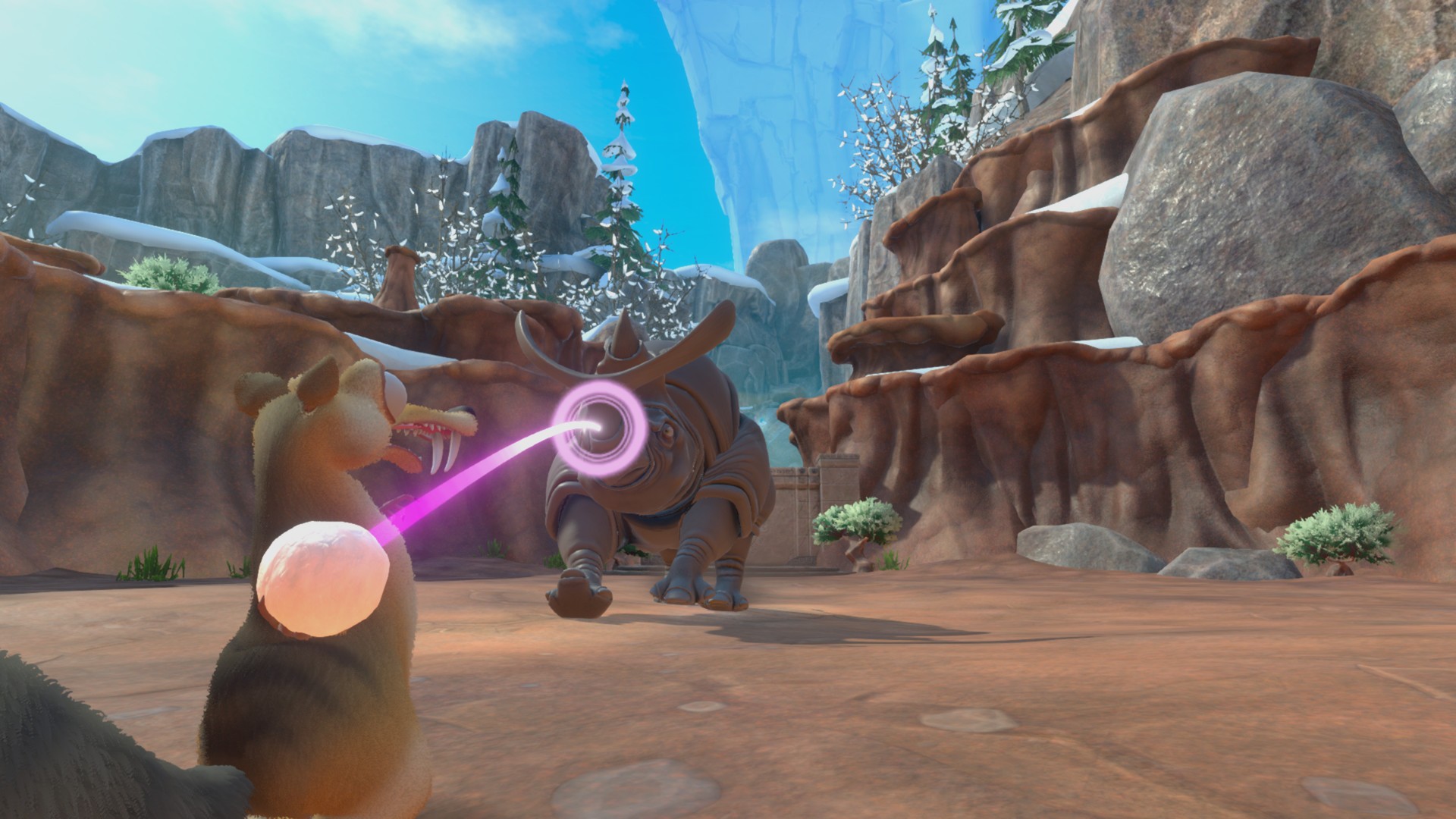 There’s a good variety of enemies to get past, you can utilise different ways to attack them. The rock throwing ability is useful to clear the path ahead but can be quite difficult to line up, when you do line a shot up it stays on the enemy which is a good thing. You won’t die much as the enemies are follow easy patterns, but Ice Age: Scrat’s Nutty Adventure does well for the amount of enemies it has and differing tactics they use. Sneaking past the wolves was a particular highlight as it turns your usual tactics on it’s head. The bosses are pretty easy to defeat as they follow the same attack routines. Scrat can kick, spin and stomp his way through enemies, you may be tempted just to run past them but vanquishing them garners more nuts, when enough nuts have been gathered then your health bar increases. There are also relics and statues to find but that doesn’t add any new skills to Scrat. To unlock some doors you need to find specific nuts and plonk them into locks, there’s not too much of this but what there is did become a little repetitive. 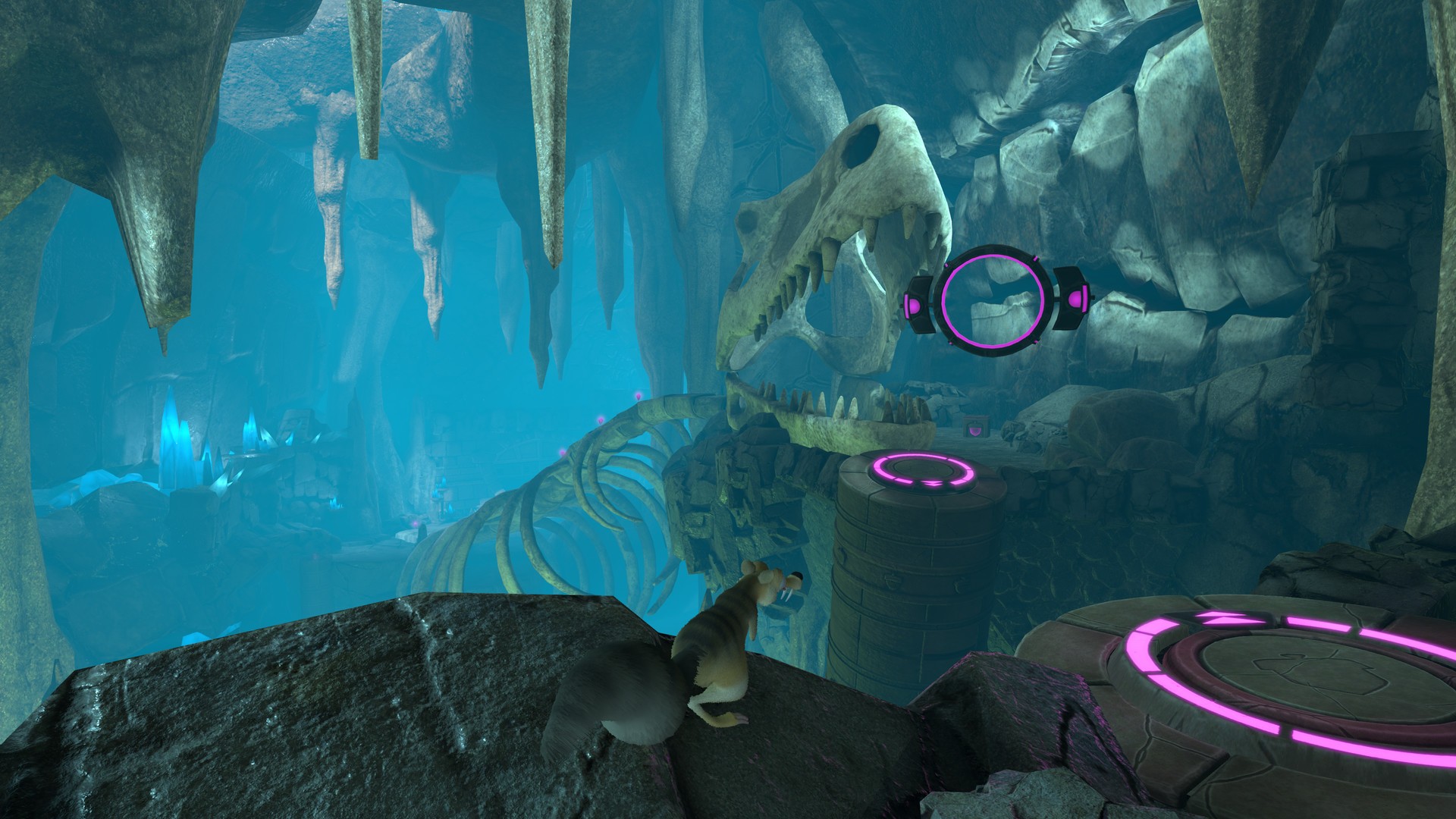 The biggest bug bearer in Ice Age: Scrat’s Nutty Adventure are the graphics. It looks a little like something from the early 2000’s which is no bad thing but the collision detection and camera angles can become really frustrating and game ending. You’ll often fall or jump down to an area and the camera zooms into a top down perspective which is annoying to get out of, this is particularly annoying when you’ve just entered an area with enemies in it. The most damning part of the graphics is the collision detection, there will be points in Ice Age: Scrat’s Nutty Adventure where you will fall through the scenery to your death for no reason or you will be able to walk through a mountain/fall down a level so Scrat changes colour because he’s in the shadow of a piece of scenery. It’s not something you should have to experience in 2019 and definitely not something you should have to see from a movie related licensed game. For fans of Ice Age they may be disappointed to find very little in terms of characters from the movies but that’s just a minor gripe.

Scrat is still chasing the nut of his dreams, but this time he needs to find the four Crystal Nuts first!