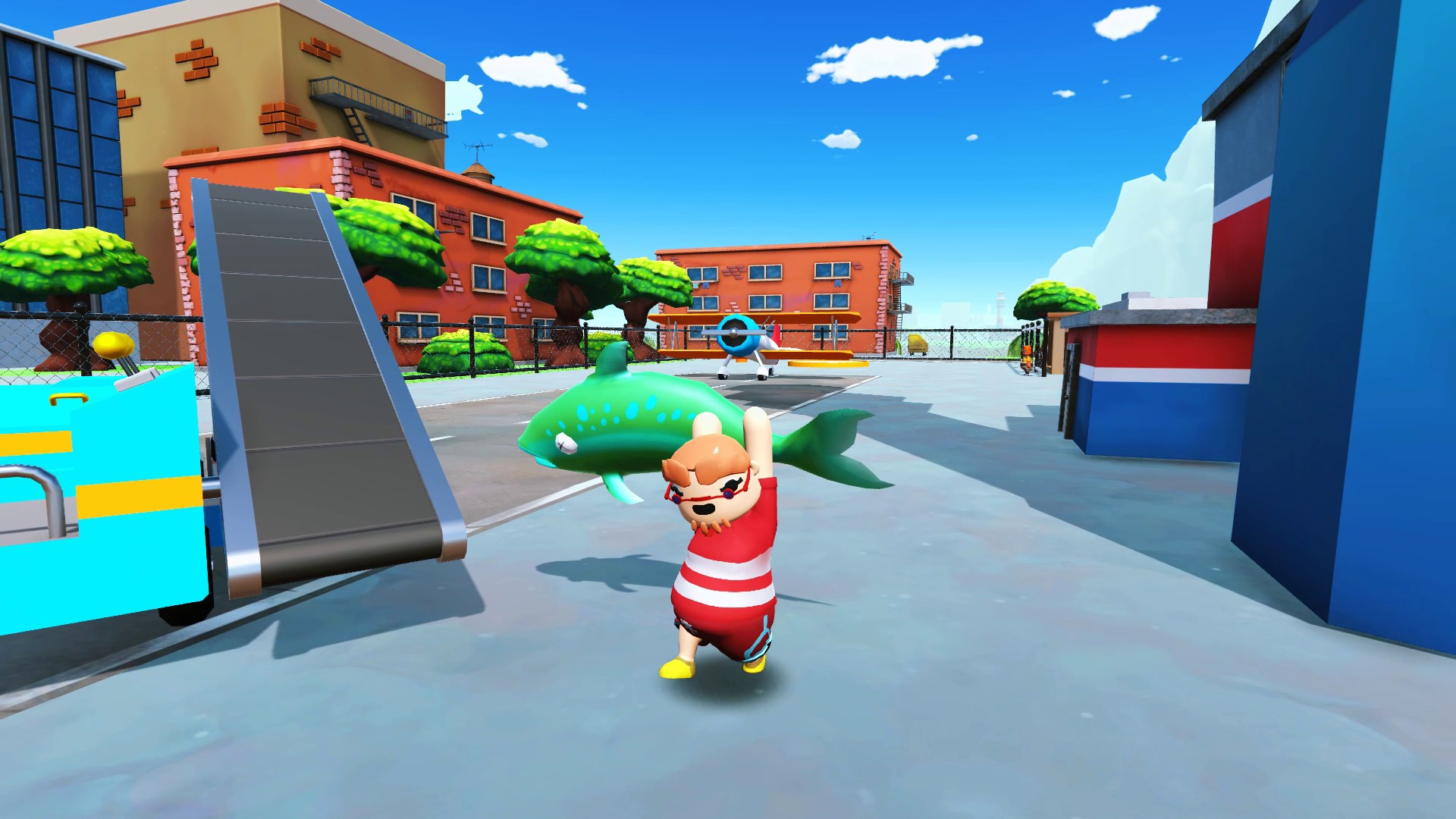 Without a shadow of a doubt, delivery drivers have now become a part and parcel of our everyday lives. They bomb around in their branded vehicles, small white vans and even within their own personal cars to deliver a boot load of parcels from A to B or from you to me. Heck, they’re even experimenting with drones these days to carry our packages in a more streamlined fashion. Quite often, you need to be superhuman to deliver your day’s quota and sometimes I’m left wondering if they posses such powers, as they blur from the vehicles to my front door, hand over a package and blur off into the distance again. Anyway, if it’s a vocation that’s ever appealed to you, well now you can try your hand at it, as Totally Reliable Delivery Service calls to deliver a package upon the Nintendo Switch.

Developed by We’re Five Games and published through tinyBuild Games, the Totally Reliable Delivery Service tasks you with collecting a series of packages and dropping them off at their designated destination by using a variety vehicles and means. Based within an open and sandboxed world made up of islands, cities and mountainous regions, your objective is to pick up a parcel from any of the designated spaces and deliver it to another location that is shown via a waypoint. How you decide to deliver the said package is completely up to you, although its design means that there’s always some sort of vehicle near you, whilst other jobs do require you to use a specific type.

However, this isn’t just any old simple task, as the game’s character mechanics take on a very similar approach to the one found in Human Fall Flat. By this, I mean that your central character has a very floppy persona, as if they hold no structure of having bones and perform their duties in a very wibbly, wobbly way. The game begins with a simple enough task, by collecting a parcel from the dispenser that sits next to you and delivering the parcel, by hand, to the destination that sits literally ten feet away. However, from here, each task presents a variation in their challenge; not just in how you deliver it, but also within the overall mechanics that make up the game. 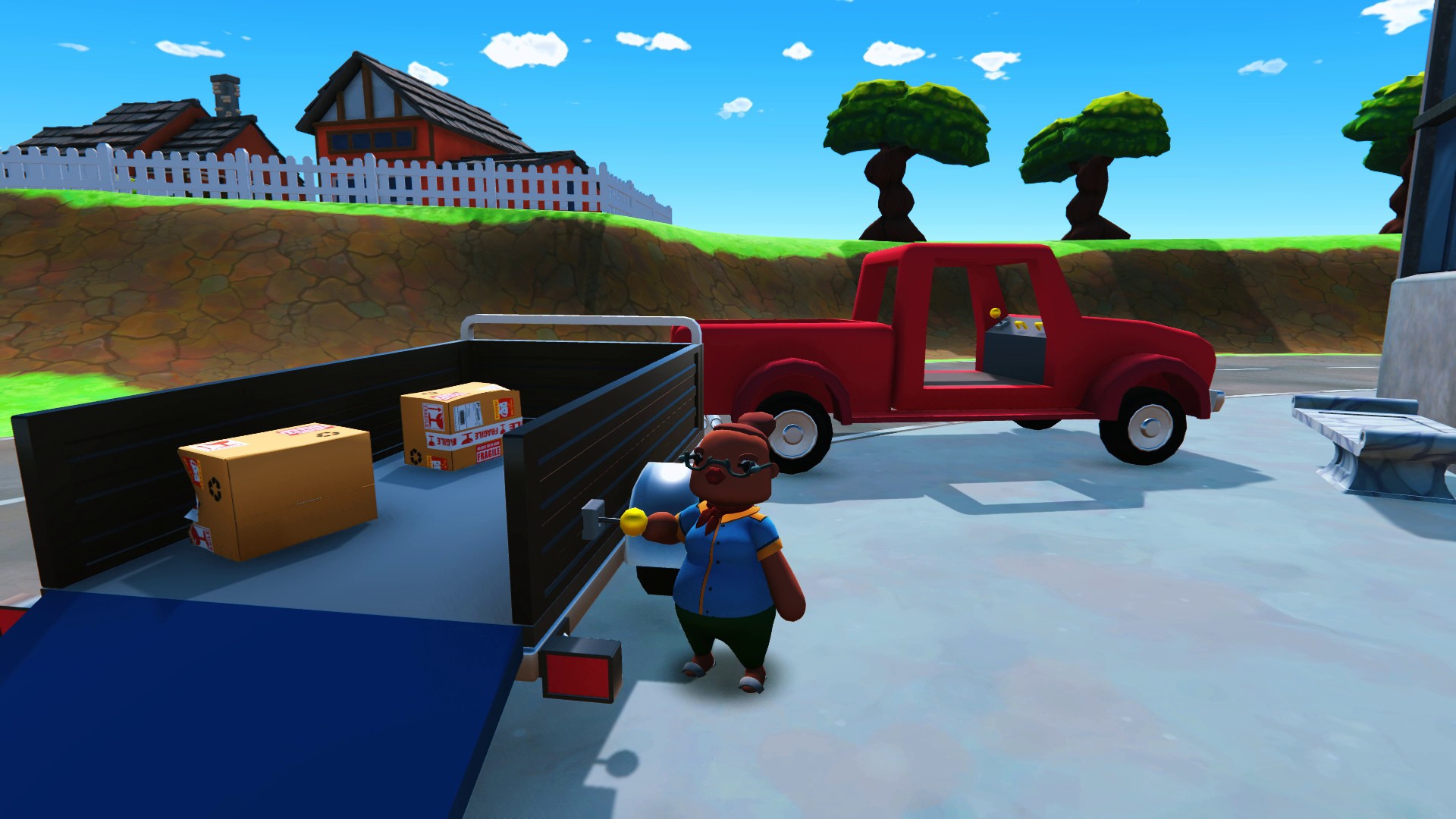 In order to pick up your packages, you simply get one from a dispenser which are situated all over the land in convenient spots. Using the shoulder buttons, you then control each arm individually to grab the package, lift it onto your chosen vehicle and try to deliver it safely. The game runs on two fronts when it comes to delivering; ensuring that it remains in tip-top condition or is delivered within a suitable time frame. The better the condition or quicker the time, the better the award. It all sounds rather simple on paper, but the reality of it is that the general physics of the game and control schemes make most of your tasks largely impossible to fulfil.

Due to wobbly nature of the world, simply picking up parcels is a task in itself. However, if you do manage to load it onto a vehicle, then driving too fast, cornering too tight or going over rough terrain will ensure your parcels fall from the vehicle; leaving you to wrestle once again in picking it up and loading it back on. If you’re careful, then you can find some success. However, when it comes to certain vehicles, the game is simply uncontrollable to a point where it almost feels broken. Take the helicopter, for example. In order to fly the chopper, you need both hands; one for movement and the other for stability. This in turn restricts camera viewpoints, making some deliveries hard to judge when it comes to distancing and positioning your chopper in the right spot. Lose control slightly and you lose your package, forcing you to land, load up and start again. It soon becomes tiresome and very frustrating; and that’s just one of the vehicles.

As a result of this, playing the game in a solo capacity soon becomes a tiresome exercise. Although you have the freedom of the sandbox to explore and a whole host of deliveries to make, the overall mechanics of the game makes it too frustrating to be enjoyable. Successful deliveries do award rankings, from gold to bronze, as well as unlock customisations for your characters and unlock new vehicles to store within your home hub, but the rewards are largely not worth the effort, making this a game that only holds a limited amount of fun and reasoning for playing. 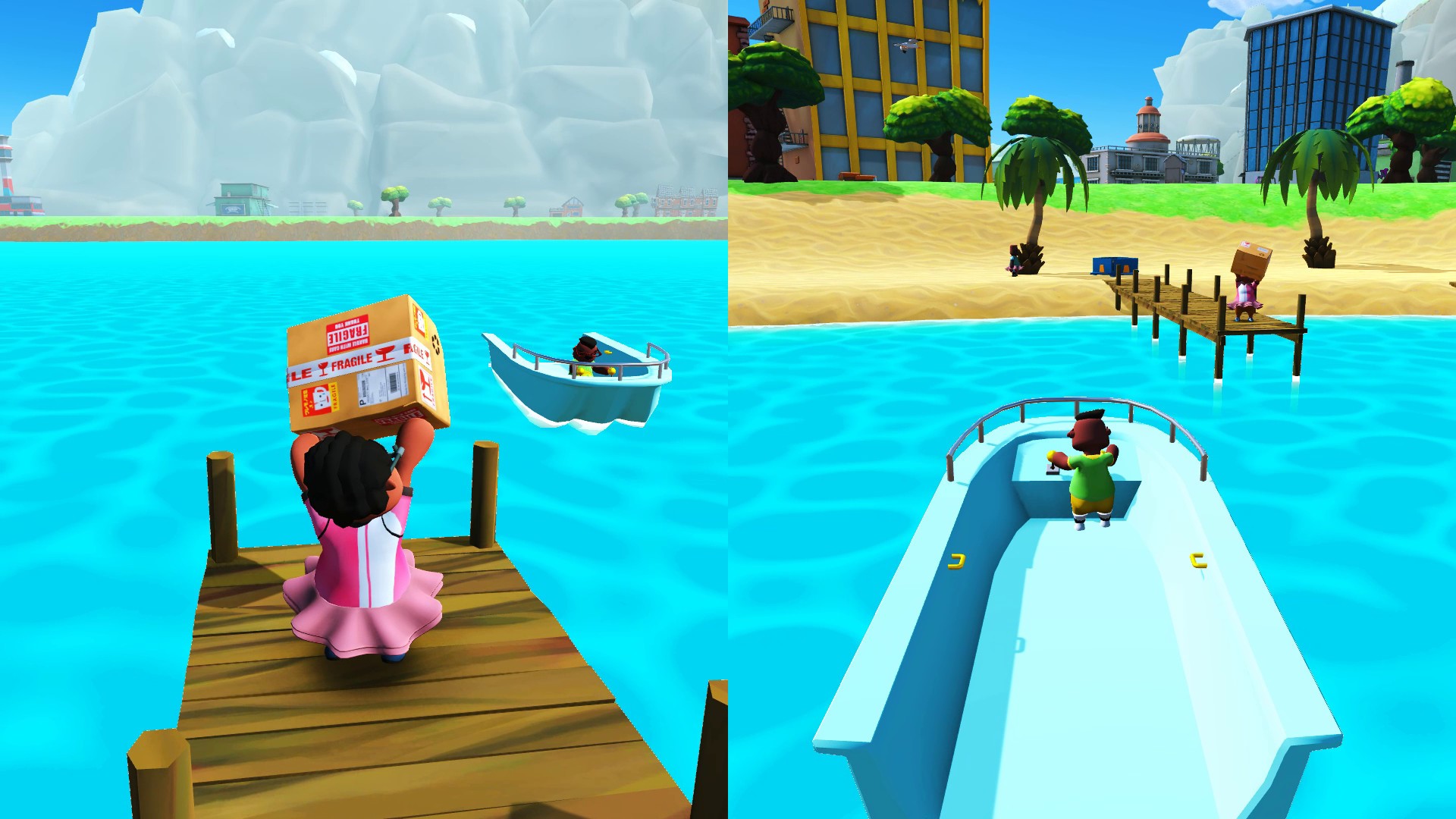 It’s saving grace comes in its ability to be able to be played with up to four players, both locally and online. There is some fun to be had when playing with friends, but not necessarily in the way that you may be thinking. Working together to play the game and deliver the parcels can be more fun than when playing in solo, but unfortunately, the same frustrations remain and again, the game soon becomes tiresome after the initial laughs. We actually had more fun going off to explore the sandbox world of the game and throwing each other all over the place with its ragdoll physics and mechanics. It was fun for a while, but in the end, it doesn’t take long to realise that it’s only within a limited form. However, a degradation in performance whilst playing in this mode also caused a few splutters within the frame rates and a great deal of pop-up, making the game borderline unplayable at times.

The game’s overall design can also hamper your enjoyment with the game, as any online random can cause havoc for you, preventing you from performing your job and simply throwing you about the map. I’m sure you’ll agree that it’s simply not much fun having someone bully you in a virtual world. Although exploration can bring some rewards with the game world holding a few secrets to reveal, but these are simply too few and far between to be worthy of investment and the base game itself just grows ever frustrating and tiresome to keep you invested. It’s a shame really, as the world in which you play looks great with its bright and colourful aesthetics and upbeat audio that matches the overall presentation. If only the game was more enjoyable, then it would be sure-fire hit, but in its current state, it just feels too loose and uncontrollable to be a satisfying experience.

Overall, Totally Reliable Delivery Service is one package that doesn’t deliver. It can be fun in doses, but it doesn’t take long in finding its frustrations and the realisation that it’s only limited in the fun it can give you. It does fare better in multiplayer, but only locally, as too many randoms seem hell bent on giving you a hard time. Again though, even in local co-op, the amount of fun you can have within the game is severely limited and in all honesty, we had better fun doing our own thing, rather than playing the game in the way it was meant to be played. As for solo players, it simply becomes a lesson in frustration with loose controls, floaty mechanics and camera angles that prevent any real sense of scale and position. If you liked Human Fall Flat, then you may fall for this game too. If not, then this may be delivery service that isn’t entirely reliable.

Totally Reliable Delivery Service is one package that fails to deliver.