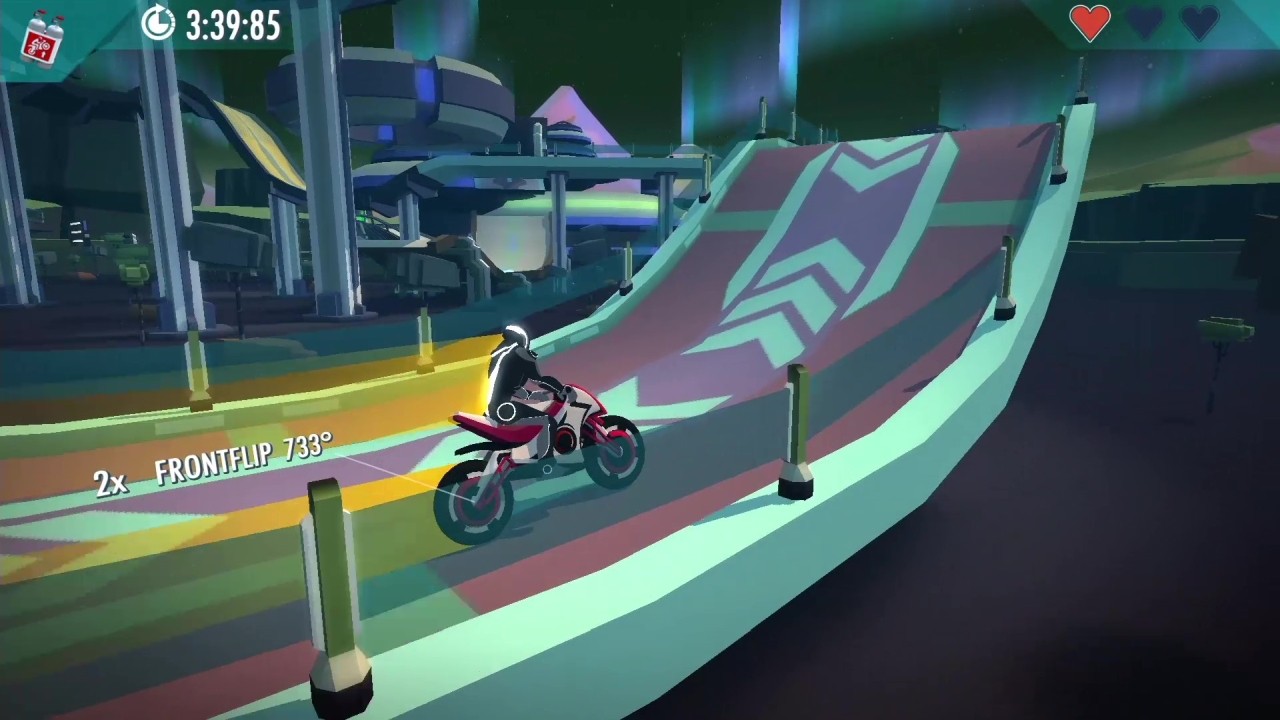 It’s impossible to deny the inspirations that Gravity Rider Zero took from Trials (Ubisoft), however the game takes only a few risks and couldn’t manage to leave behind its mobile roots from the original title. Coming to the Nintendo Switch as a port made by Qubic Games – who already did the same with a lot of mobile games – can it be as fun as the game from Ubisoft?

Gravity Rider Zero is a total loss of potential. And this is really sad because the visuals and gameplay are so great that you’re going to be angry due to repetition and the lack of better accomplished ideas. Really. This game, it’s basically Trials in a distant future. Keep that in mind. If you don’t know Trials yet, try to imagine Gravity Riders Zero, but with a real challenge and a better gameplay.

Here you have the basic commands such as accelerate, nitro and a bit of customization on your futuristic floating motorbike. The gameplay core is to race against time or opponents until the finish line, taking your motorbike to the checkpoints and controlling the balance in every ramp. Otherwise you’ll hit the ground and break your character’s neck. When you finish a track, you’ll be rewarded with diamonds that can be spent in the store where new sort of vehicles can be purchased, like quad cycles, motorbike without wheels and a lot of insane toys or even a flying dragon. And, well, we got skins and some cosmetic stuff as well. 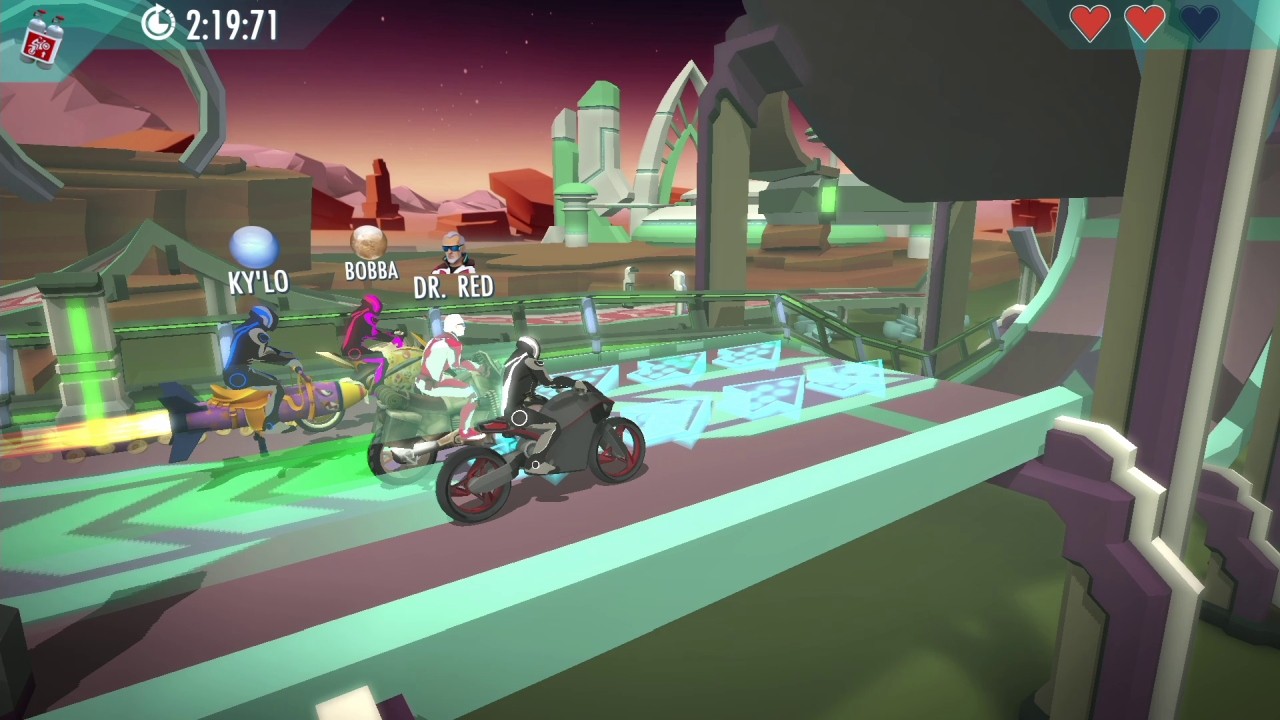 On the main menu you’ll get several worlds (around 33) to beat containing three different tracks within. In every single track, the player starts with a nitro in the inventory that can be used once per track, with no way to get this refuelled by doing tricks – sadly or anything else. Yes, there’s no way to replenish this and get advantage ahead of your opponents. What you see is what you get.

This design choice makes the game so pointless when it comes to the tricks. When you successfully perform any of those backflips, 360º, 720º or whatever trick, a message will pop out from the character telling you which move you’ve just accomplished… and that’s all. Totally unrewarding. No diamonds or prize for that, sadly.

Also the races are 100% on rails, and even having a lot of turns and stages that don’t go straight only, the bike won’t drop out from the track, since the gameplay takes you carefully and doesn’t have any kind of penalty for dangerous driving. Which ends up, again, being a bad experience, since the level design is gorgeous bringing to you some cool futuristic tracks with 2.5 and 3D viewing. However, the main game’s formula is the well-known three stars rating system – mobile influences – where you get more stars if you manage to accomplish all the same tasks listed: finish that world without losing a single heart, reach the finish line within a certain amount of time and simply finish the track. 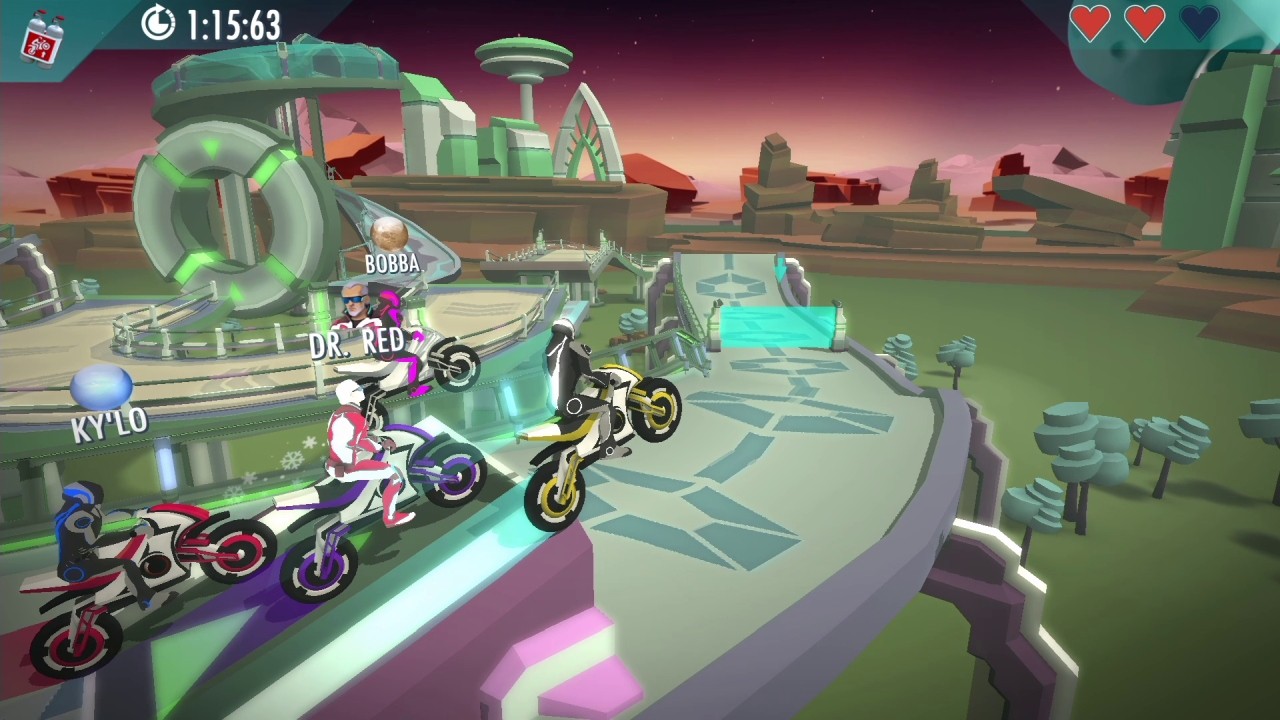 After each stage ends, you get experience. And when you have enough experience points, you get a level up. Once you reach a specific required level, you’re going to unlock new purchasable vehicles, skins and trails – again, cosmetic stuff. Honestly, there’s not much to do in Gravity Riders Zero. So, if you’re after a good inspired Trials game, I’d recommend you to search for another one. This mobile port will only satisfy the audience less acquainted to Ubisoft’s motorbike series or extremely casual gamers.

Finally, Gravity Riders Zero isn’t exactly a bad product. It’s just too basic. Not that it’s bad, but the game simply doesn’t spend effort to introduce you to something truly enjoyable. There’s no upgrade system, split screen multiplayer or reward for doing tricks… nothing. It’s just a lazy port from the mobile version, but without all the in-app purchases (at least) and waiting-for-recharge system. It can be fun for those who haven’t played the Trials series yet, and yet not for much long.