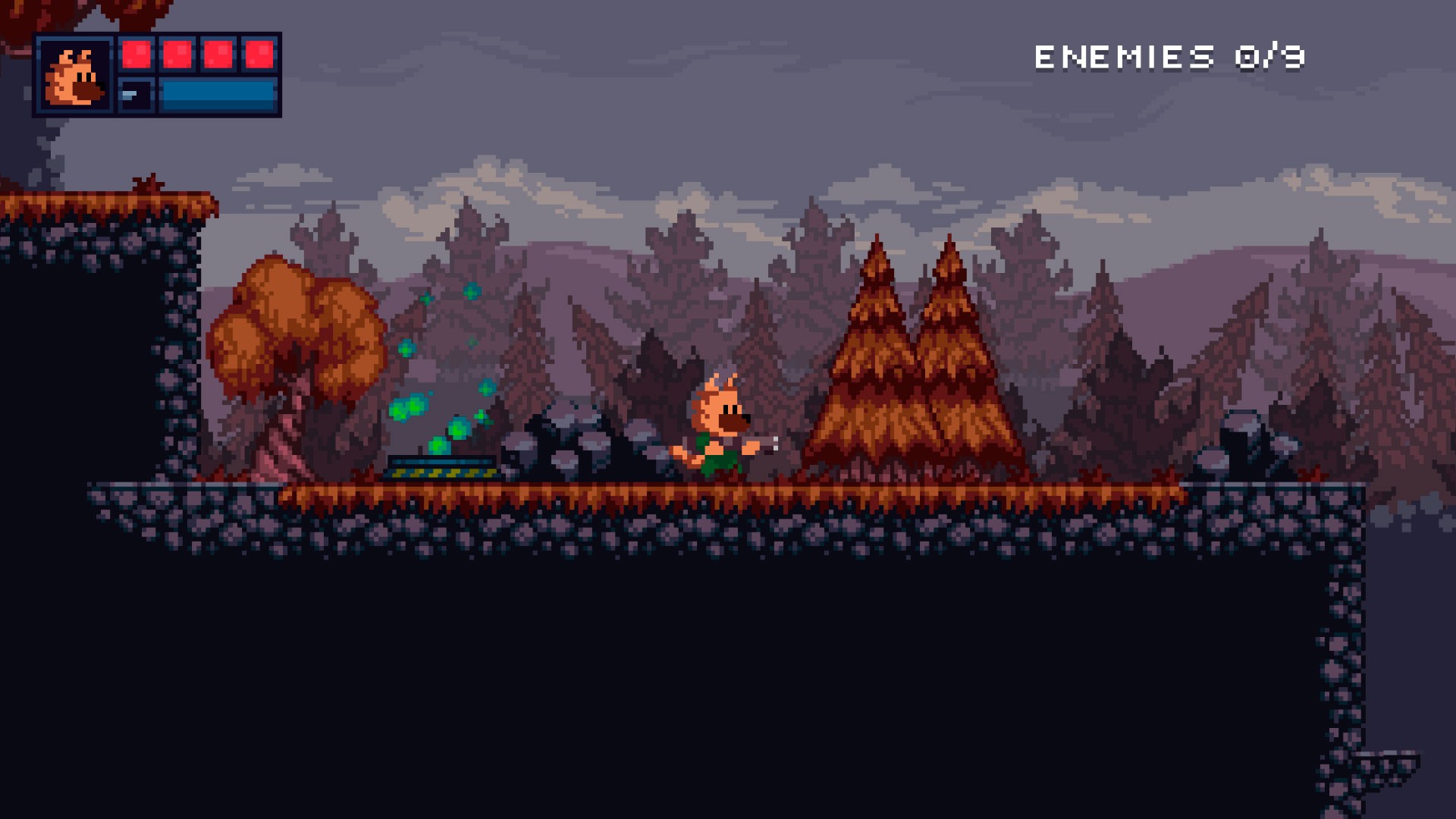 What started as a fun indie platform game soon spiralled into my first rage quit on the Nintendo Switch. The last time I rage quit was probably in 2008, but I don’t want to talk about it. What is the title that pushed my buttons? Thunder Paw.

The game starts as a lonesome dog wandering the plains when an explosion goes off at his home. He heads back to check on his parents, but a note is left telling him that his parents have been taken and if he intervenes, he will be killed. Well, put me out of my misery then and this game almost cost me my Switch. Based on the current situation in the world, if the Switch goes down the pan, it’s unlikely I can pick up a new one in the shops.

So Thunder Paw gets you into the action pretty quick. There’s signposts you walk past that gives you your instructions: B for jump, Y for shoot. That’s it. You can, of course, use the shoulder buttons if you prefer and switch between the analogue stick or the d-pad as both function the same. The latter is a little more precise, but the stick feels much more comfortable. Thunder Paw is a platform game with straightforward mechanics: jump over or onto stuff and shoot bad guys. 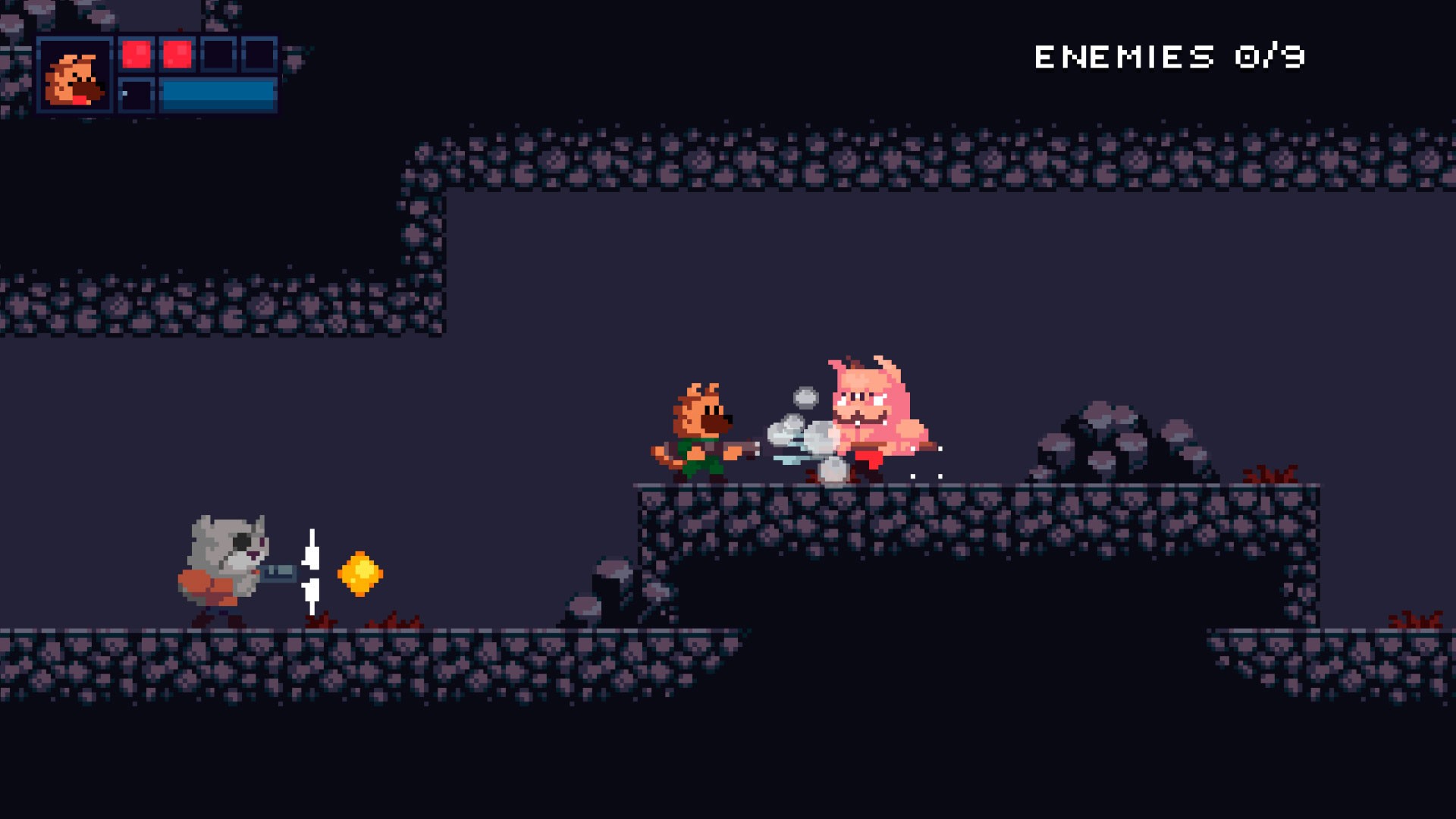 I was quite bewitched with the game at first as it reminded me of 16-bit platform games I used to play in the 90s like Titus The Fox (if anyone remembers that), as the graphics are on par with that and the level design looks like one of the cover disks you used to get on game magazines. That’s a good thing by the way. The controls are responsive enough, there’s a bit of float to jumping, but generally speaking, it was all so very easy. Then I got to the first boss.

This first boss was a monkey who paces back and forth lobbing hand grenades at you. And this was my demise. The concept is simple: shoot the monkey until his health is no more, then he dies. However, you have four health squares of your own to deal with and each time you shoot the gun; Thunder Paw recoils back. The pattern goes like this: the monkey is on the right side of the screen, charges to the left, then the right, over and over again. Your gun has the range of a shotgun, so you have to get up close and shoot, all the while drifting backwards with each shot. As the monkey charges you, you’ll have to jump over his grenades which seem to float in slow motion, yet almost always hit you. As he loses his health, his speed increases as does the grenade lobbing. I lost count how many times I died, and I genuinely was hating it so much that I threw the Switch twice (thankfully on the bed).

It’s not that Thunder Paw is the hardest game I’ve played, but the difficulty was just completely unreasonable and was the polar opposite to the rest of the game. During the standard levels, you have an enemy count in the top right of the screen stating how many remain. In the build-up to this boss, I didn’t lose a single life and apart from a few mistimed jumps into the path of an enemy attack. It was easy – so much so that I even considered switching the game to a hard mode. My opinion swiftly changed when reaching the boss. It genuinely was that frustrating that I quit there and then and more or less had a little sulk, coming back to it the next day. 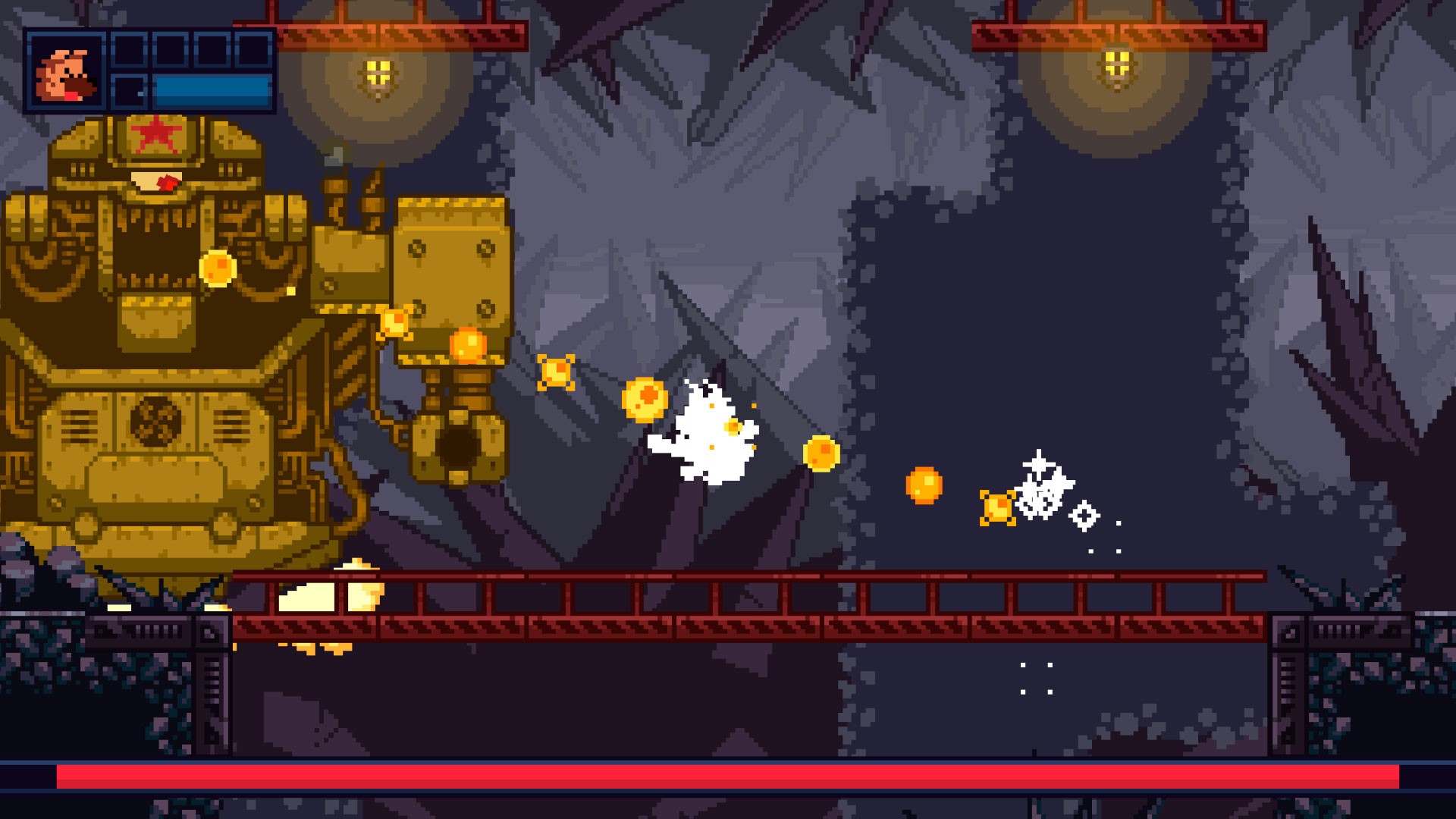 After getting past the boss, my opinion didn’t change as the difficulty was a rollercoaster on sketchy stilts – it was just inconsistent. It’s a real shame as I very much like the character and graphics, but the game itself only becomes repetitive, and the infuriating face-off with the bosses just doesn’t provide enough incentive to stick with it. The standard gun makes the experience worse – the only way to improve is by collecting gems from the dead enemies, and it will enhance the power and the range of the weapon. Still, it’s not really enough to offer the variety and satisfaction of similar titles.

The challenge is there if you’re looking for it. Of the two modes, easy and hard, there’s an emphasis on the harder difficulty. When you die in-game, enemies reappear, and you go through the process once more, eliminating everyone on the level (bear in mind there’s no incentive for this other than finishing the level – no power-ups, new skins or anything else for that matter). As mentioned earlier, death wasn’t something I had experienced until the monkey boss, then after that a handful of times. Getting frustrated with the mechanics, I switched to the easy mode, and it was a doddle. If you die (in the first few levels that’s a feat if you do as it’s stupidly easy), you return to the checkpoint, but the enemies you’ve already killed remain dead. If you’re already struggling, then this is a good incentive and also means you’ll get through the game faster, but it has zero effect on the bosses.

After the first boss, I noticed the pattern with the remainder; simple attack, as you knock their health down, they get faster and a little erratic. While there’s no variety, I still found it a challenge. The best way to combat it was going to the docked mode and using a pro-controller, though I’m happy with the Hori-pad I use in handheld, it felt a bit more comfortable. However, the constant kickback of shooting the gun (and needing to get in close to attack) plagued the boss battles so much. With the repetitive, relatively unchallenging levels, regrettably I have to say that Thunder Paw was a bit of a disappointment and not a title I can recommend. Perhaps your opinion may differ from this, and good for you, but based on my patience levels and not having a rage quit for over 12 years; I can hardly praise the game.

For retro platform fans who don’t mind repetitive gameplay and limiting controls – a.k.a. a challenge, but in the wrong sense. The graphics are good, and Thunder really is a likeable protagonist, but it’s not enough to carry the game.

Infuriating kickback on the gun and requires power-ups.
Spike in difficulty with bosses unfair and unenjoyable.
Repetitive gameplay.