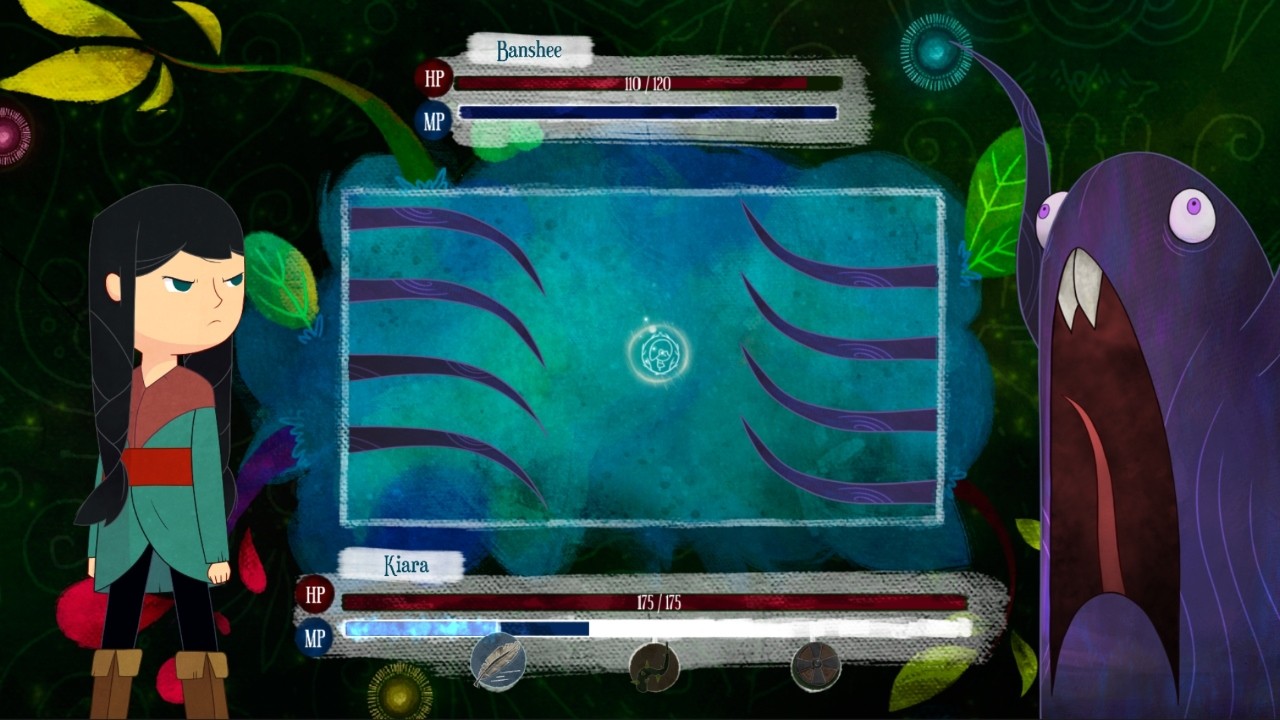 Something that has always been a big selling point for me in indie games is their chosen themes and the aesthetic of the chosen art style. This is also what attracted me to Lost King’s Lullaby. This side-scrolling game with roguelite battle dynamics flips the traditional lost-child turned adventurer tropes on its head with its subtle narrative writing and permadeath stakes. Join me in this review as we learn about the curse inflicted on the island of Banba and Kiara’s journey to solve it through this beautiful, frustrating game.

The game begins with a storybook-style, expositional introduction as the history of Banba is recounted. We learn that the curse was placed upon Banba and has caused every human except Kiara to be frozen in time. She is sent by the goddess Morringna into the forest to find the Tuath Dé (‘The Tribe of the Gods’) to undo this curse. The story is permeated by references to Celtic culture while creatures that threaten Kiara’s safety and progression in her journey are named after stories and creatures of Celtic folklore. She is accompanied by Suntrai who can assist her on her journey and as Kiara is an eternally silent protagonist, Suntrai speaks at Kiara reminding her of the mission and imparting small, ambiguous pieces of the plot to the player. The forest has been disturbed and creatures are appearing at random and not acting as they should normally. Something has happened to Banba. 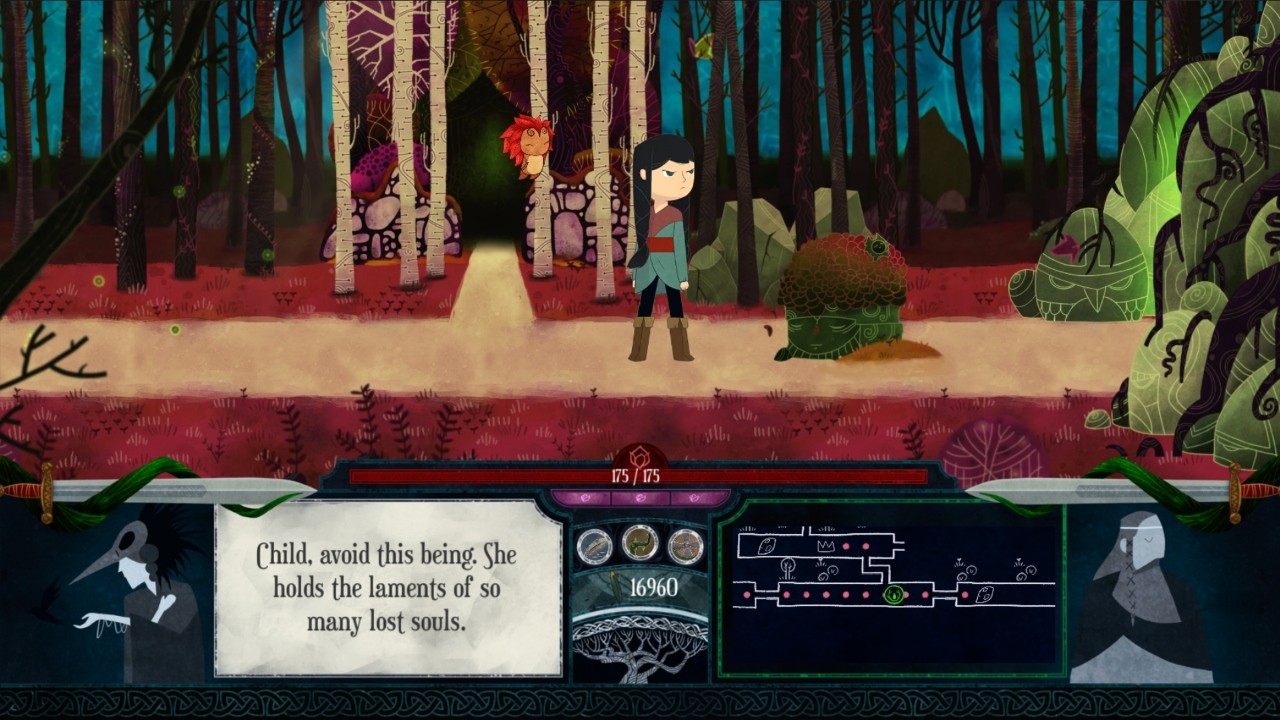 Lost King’s Lullaby’s gameplay takes features from many genres to create a relatively unusual gaming experience. You explore the dungeons of the multiple unlockable areas and can interact with bushes and ‘doorways’ in the dungeon in the main side-scroller gameplay style. However, the top-down roguelite battle sequences, reminiscent of an Undertale style battler, have a far more simplistic, mechanics-focused style of gameplay. The alternation between these two keeps the game fresh to play although while navigating the dungeons, gameplay can be a bit dull in comparison to the other components that make up Lost King’s Lullaby. I’d definitely ascribe the term ‘roguelite’ to this game as, while it has many features of a roguelike such as procedurally generated dungeons and the A to B gameplay style, the stakes are not as high as they are in a traditional roguelikes and the top-down grid style gameplay is only used for the battle sequences and not the exploration parts of the dungeon-based game. In-game there is a shop which can only be accessed before you enter the dungeons or after you have been killed. If you chose to leave the dungeon you are able to keep all of your collectable feathers and spend them to upgrade your three skills. In the top-down battler sections, you avoid the enemy’s attacks whilst waiting for your MP to refresh so you can use your skills again. Skills provide one way to affect your evasiveness, one way to control how you attack and one to control how you heal.

While each character’s individualised attack sequences and unique artstyle made this game very reminiscent of the playstyle of the aforementioned Undertale, the scarcity of new enemies in each areas and the total amount of actual enemies that you can choose to battle with, means this game becomes less about skill and choices and more about muscle memory and learning the attacks. You can even choose not to battle some enemies (excluding boss battles), by-passing up to three enemies per dungeon by asking Suntrai to petrify them. This was a very useful skill as when your health is low; getting killed will send you right back to the start of the dungeon you are in when you next enter. Gameplay definitely revolves around stat management; maintain your health points at a cost of not attacking until you regain enough MP to make another move. This game isn’t turn-based and requires a lot of focus. While it isn’t particularly difficult once you have the controls and patterns down, Lost King’s Lullaby can be quite frustrating for very little sense of achievement in-game. When defeating bosses, you are given at most six lines of narrative but these are all very ambiguous and do little to motivate me to progress onwards to the next dungeon.

The premise of this game and its reliance on Celtic culture and folklore was a very interesting choice of narrative direction. I enjoyed the unique naming system and didn’t find the different language distracting in the slightest. This gave the game it’s wholesome, earthy feel. However, the narrative is not as developed as the game’s intro would have you believe. The game is not terribly well-written in comparison to others of the genre and I feel this was an area of real missed potential. I only wish we got to know more about Kiara and about Banba but this was seemingly sacrificed for a complex gameplay style and does not fulfil the promise that it makes in its opening narrative-driven scene. 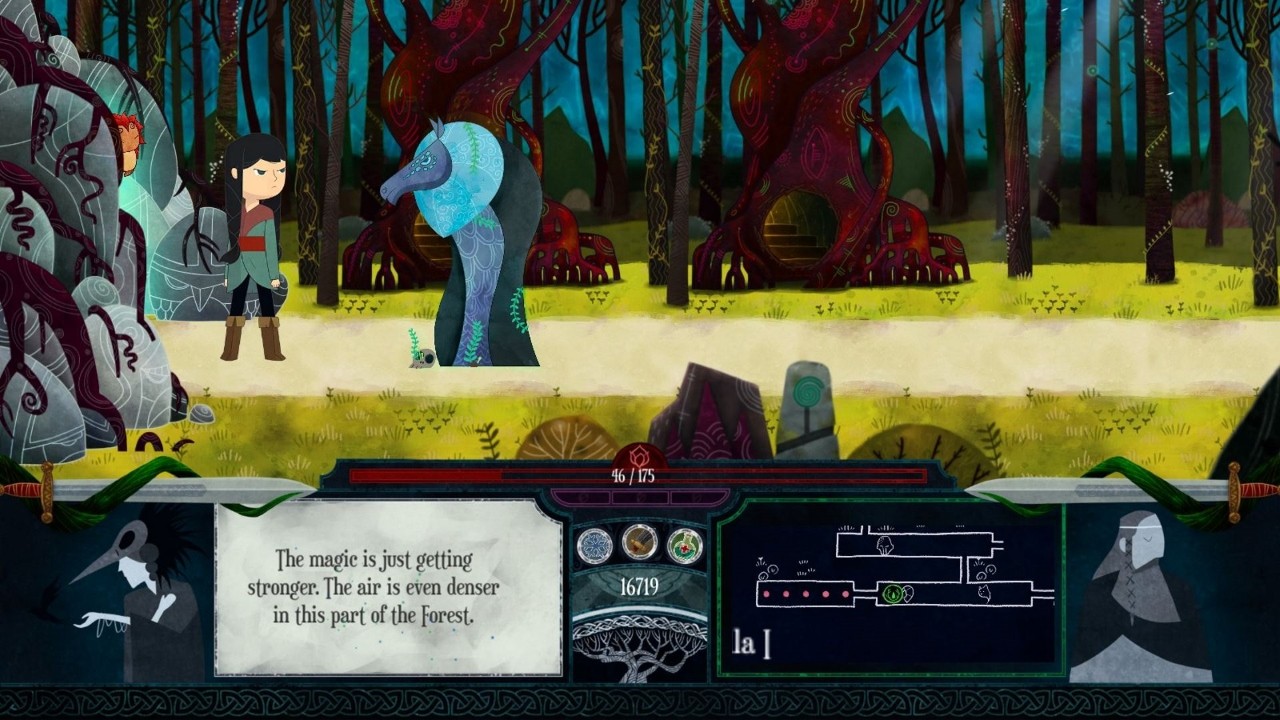 I cannot deny that my favourite part of this game was its artistic direction. The music and artstyle are what make this game a standout piece of art more than any other features. It’s 2D, almost paper-like artistic style was subtle and perfect for this short indie game. The rolling coloured clouds between each section and battle, and the detailed, thoughtful designs of the folklore-inspired creatures were a delight with each battle. I especially enjoyed that the battle sequences continued this theme. My favourite creature was this purple cat creature named ‘Sluagh’ which in Irish and Scottish folklore were the spirits of the dead. The character design had this large, smiling purple cat covered with smaller cat heads who in its attack would be used to chase you across the play-screen. This was a unique experience to be so delighted by even the smallest detail of the artist’s work. The music was so atmospheric and matched each area of the game so well. The battle theme had me genuinely engrossed in the tension and stakes that were associated with the risk that Kiara could be defeated. The sound effects were rather repetitive but this only gave me more motivation not to be hit so I didn’t have to hear Kiara squeal the same way she had 50 times beforehand.

Lost King’s Lullaby doesn’t have much replay value but is a short enjoyable experience that is well worth its price point. It reminded me in parts of Hollow Knight for the subtlety of its story and its gameplay is similar to Undertale and The Binding of Isaac. Lost King’s Lullaby felt like more like a creative exploration of culture and folklore and is an atmospheric piece of art that really plays with genres to deliver a unique experience. I wouldn’t recommend missing this indie game for the world.

Follow Kiara as she explores the procedurally generated dungeons of Banba. A frustrating yet charming indie game with a Celtic folklore-inspired theme.