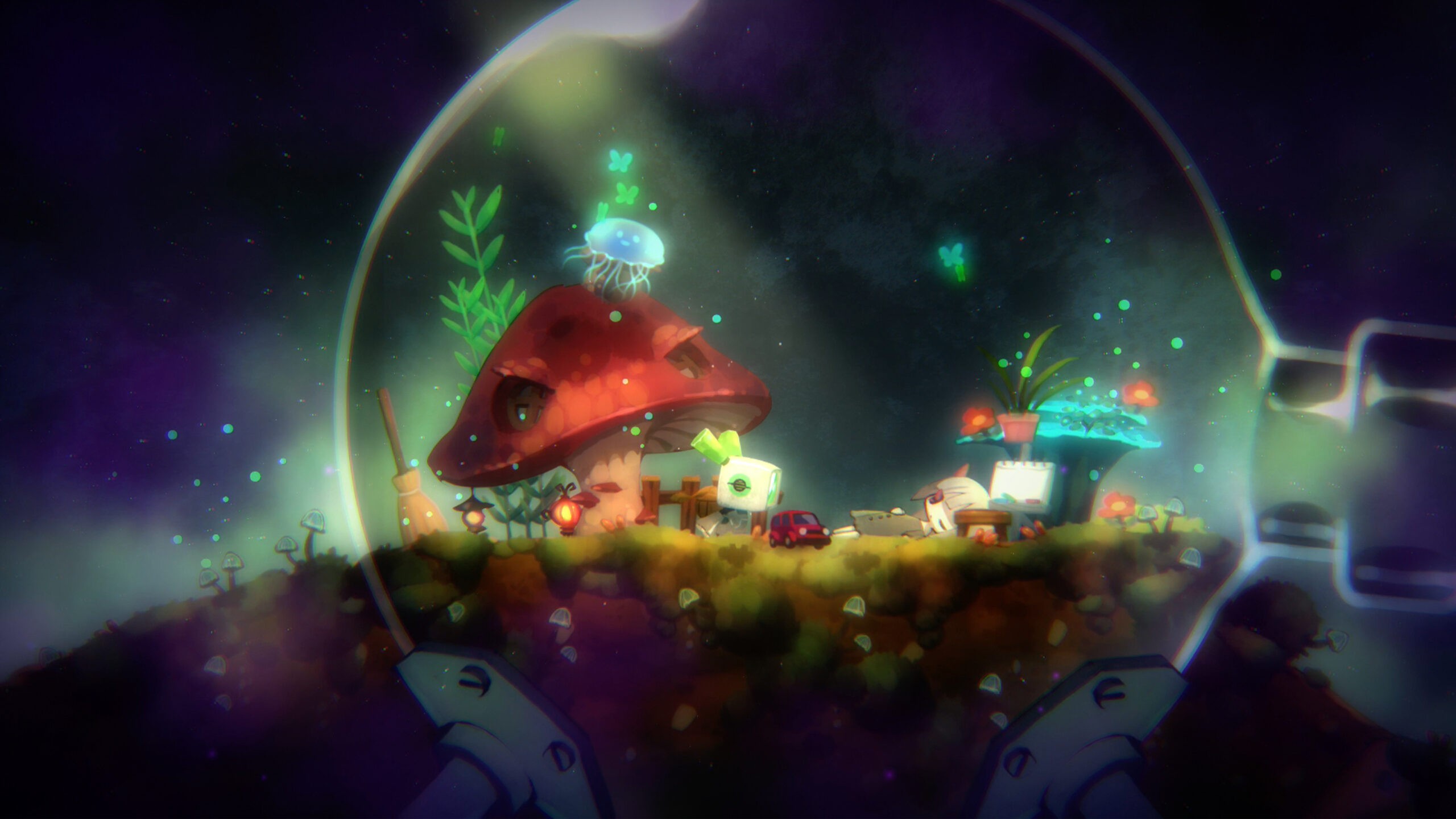 void tRrLM(); //Void Terrarium tells the tale of a robot, brought to life, perhaps unintentionally by a rat that crawls into his chassis, who awakens with no memory of the state of the world. A dangerous fungus has taken over the surface of the planet, contaminating its victims and eventually choking the life from them, and so humanity moved underground. This robot, later named Robbie, meets with an AI that had once been tasked with the automation of the drilling process so humans could pursue this new subterranean frontier. FactoryAI, as this entity was designated, is now decommissioned after having misjudged the survivability of humanity and playing a part in its destruction and, as it turns out, Robbie is the first sentient entity FactoryAI has seen in a very, very long time—until now. Enter Toriko, the very last vestige of human life and the new ward of two automatons seeking to do right by humanity.

void tRrLM(); //Void Terrarium is part top down dungeon crawlers with roguelike elements and part caretaking simulation. While this may sound like a lot to have on your plate all at once, void tRrLM(); //Void Terrarium does a fantastic job of intertwining these two aspects so that they’re never overwhelming. On the dungeon side of things, you enter a labyrinth fraught with enemies in order to gather supplies to provide the best possible care for Toriko. Those who have played a dungeon crawler will be familiar with the turn-based aspect of movement and attacking wherein an enemy will not act until you do. Each turn drains your energy, which can be restored using items found within the dungeon. If you run out of energy, your health will start draining and Robbie becomes a ticking time bomb. You can move left and right and side to side—as well as diagonally, by holding R1 before moving in a direction. You can attack using x and face an enemy by tapping square. You can also dash with circle, which automatically ends once you encounter an obstacle, be that a wall or an enemy. When you enter a dungeon, you start at the same disposition every single time: level 1 with an empty inventory. Unlike other games in the genre, there’s no option to stock up on overpriced items to ensure some level of success, but that’s likely due to the way the roguelike elements of void tRrLM(); //Void Terrarium work.

You see, death in void tRrLM(); //Void Terrarium doesn’t mean a frustrated groan and the desire to toss your controller; instead, you’re sent back to the scrapyard and everything you had been carrying is technically lost, but by way of being converted into resources. These resources are then used to craft furnishings for your terrarium as well as medicine for Toriko, should she become ill. Hardcore roguelike fans may say this system is too forgiving, but I liked that I made some measure of progress every time I left the dungeon—prematurely or otherwise. There’s still the threat of starvation if you can’t manage to pull yourself together and delve deep enough to rustle up some grub, so there’s still an incentive to “get good.” 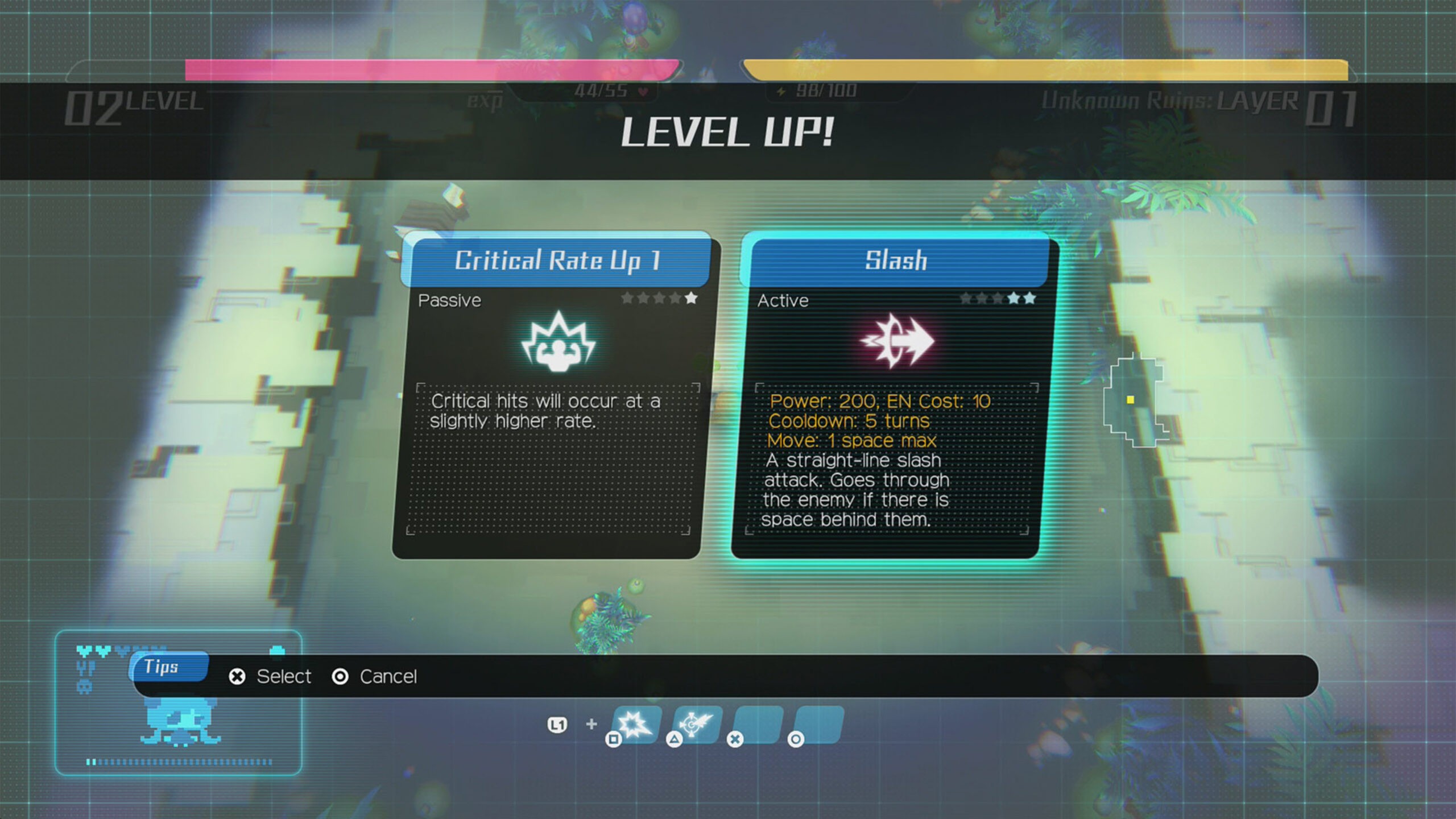 Robbie has a limited inventory, meaning you’ll want to focus your efforts on acquiring items that are vital to what Toriko needs or what the story asks of you, though sometimes they are mutually exclusive. When in your inventory, which can be accessed by triangle, selecting an item will tell you its name, what it does, the amount of contamination, and what resources it will break down into once you leave the dungeon. This allows you to plan accordingly what items to prioritize over others. Contamination, which makes sense given the toxic fungal epidemic that wiped out humanity, has good and bad consequences to items; depending on the object, higher levels of contamination can actually make it more effective when used. Contamination is also a resource, so holding onto contaminated items will give you small amounts of the necessary crafting component. Items found in dungeons include sprays, which deal effects to multiple enemies, grenades, tool kits to heal Robbie, batteries to restore Robbie’s energy, mods, weapons, shields, and food for Toriko.

Enemies are thematically appropriate, featuring mutated versions of commonplace animals or killer machinery. Defeating enemies rewards you with experience and sometimes items. As you level up, you’re given the choice of two random upgrades which apply to either stats or your inventory size or teach you a new skill. Robbie can learn up to four skills and the trade-off for the powerful strikes therein is a set amount of energy, meaning you should only rely on them in a pinch or if you’re well stocked on batteries. Equipment management in void tRrLM(); //Void Terrarium isn’t as present as other games in the genre which would have you equip at least a weapon and a shield from the get go. You’ll sometimes find a weapon or armour and can equip them, but that won’t always be true and they also get scrapped for materials like any other inorganic items in your inventory. Mods, too, are a type of equipment and they add special effects to Robbie’s attacks—sometimes for a steep trade off. 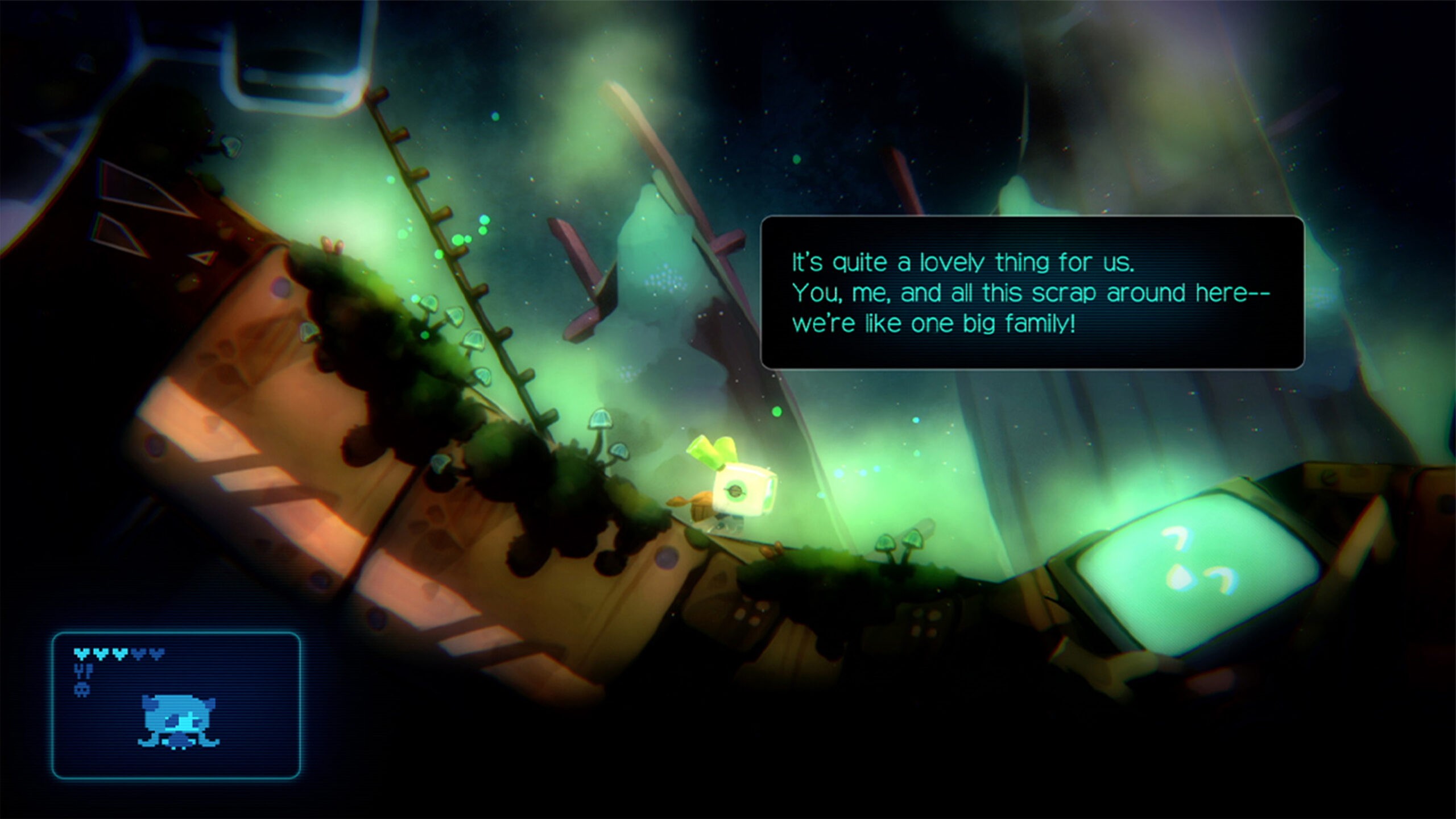 On the caretaking simulation side of things, you must create a comfortable habitat for Toriko and make sure she is clean and healthy and well fed. The Pet Nanny, “Penny” helps you monitor her status while you’re in the dungeon, presenting her stats the way a Tamagachi or Digivice would. Penny will chime when you absolutely need to return and take care of things and failure to do so will cause a decline in Toriko’s health. The beauty of these two genres coexisting is that you must be conscientious when using items and ask yourself: who needs it more, me or Toriko? Because she is young and the world outside is so dangerous, Toriko’s well-being relies entirely on how well you do out in the wastelands. Food is the one item that doesn’t get broken down and you store it in a safe until she is ready to eat. There is the risk of food spoiling, however, and you can see its shelf life denoted by several days, one of which will pass for every trip into the dungeons you take. You can feed Toriko spoiled food if you’re truly hard up for rations, but doing so risks her health.

You can also craft decor to add to Toriko’s “fishbol condo” using the resources you get from your dungeon diving. These not only make your terrarium nicer, they act as permanent upgrades that effect anything from Robbie’s stats and inventory size to Toriko’s hardiness. You gain a crafting bonus only for the first time you’ve crafted the object, but you’re free to make as many as you have resources for and decorate however you see fit. Personally, the time and effort spent trying to make Toriko’s environment liveable created a stronger attachment to my ward and made me even more eager to brave the dangers of the wastelands, if only for her sake.

Last and certainly not least, we have the look and sound of void tRrLM(); //Void Terrarium. The saturation of vivid colours and cutesy, blocky character models are deceptively cheery despite void tRrLM(); //Void Terrarium darker, more serious story. The soundtrack runs the gauntlet from sombre instrumental pieces to gritty electronic, and I purchased a physical copy and listen to it in my car—it’s that good.