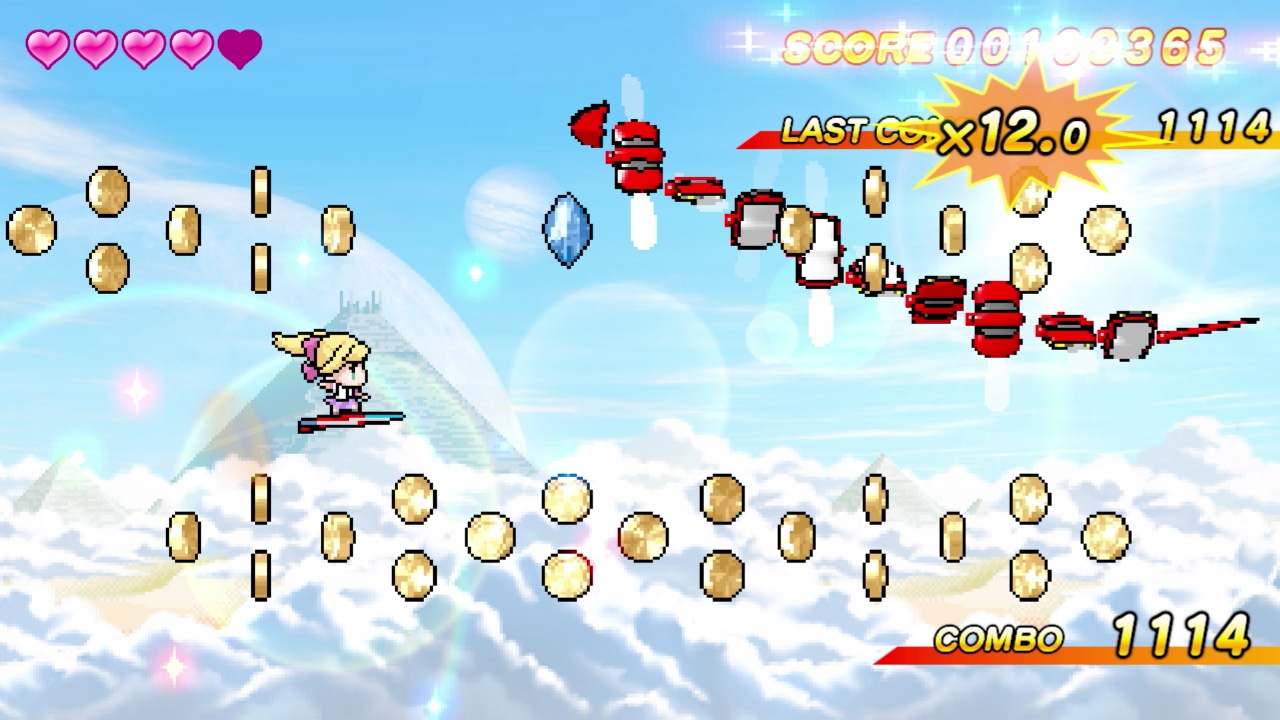 Have you ever gotten a superball from a vending machine? Pop in a couple of quarters, turn the handle and boom, rubber ball. Then what? Well, you bounce it a few times, chase it around, maybe see if you can catch it with some fast hand movements. When you’re a kid, it’s potentially a couple hours of fun. As an adult, maybe a few minutes, drenched in nostalgia. But then you get bored and you’re done, but at least it was only a few cents. This is, for better or worse, the perfect analogy for my time with SKYPEACE.

There isn’t really a plot to speak of for SKYPEACE. You get to choose whether you’re in the shoes of a male (Surf) or female (Pure) sky rider, who zip around the screen on high-flying hoverboards. The objective for each level is simple: collect as many coins as you can, try to grab all the treasures, and don’t hit the enemies. Occasionally, some powerups will appear to give you a shield, allow you to bust through some enemies, or go into a berserker mode that makes you invulnerable for a few seconds. That’s…that’s really it. There’s a bunch of achievements and some stages. 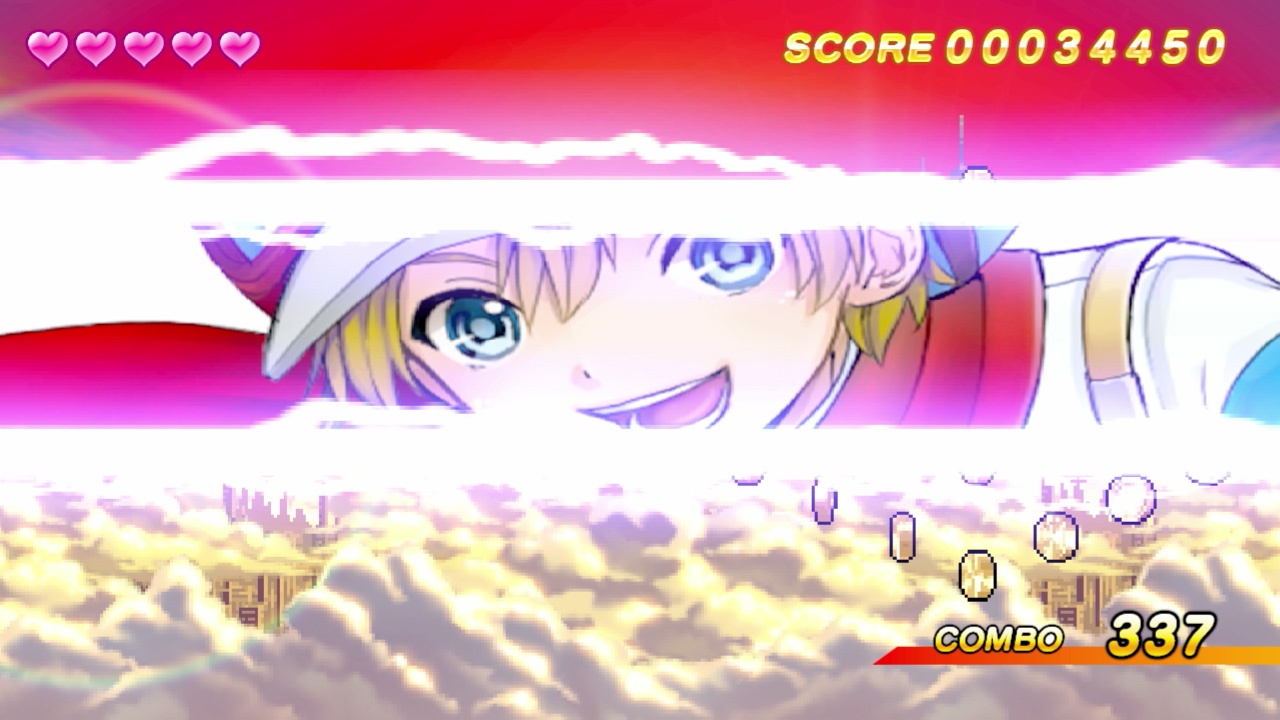 What’s utterly bizarre is that the setup for SKYPEACE looks like it’ll be potentially amazing. The publisher, Sonic Powered, did a great job on their logo and also in getting some good looking characters for the splash screen. Sonic Powered did some smaller titles that may get recognition, such as Notes from the Abyss on the DS, as well as a mobile version of Wonder Project J (think Princess Maker but without the implied incest). Sure, there weren’t any options for the game other than to change the language and adjust the volume, but simple menus don’t mean anything. But then you look into the game and realize all you need to do is move. That’s it. You move up. You move down. Maybe left or right. But it’s an autorunner without running (so autoflyer, I suppose). Collect the coins. Collect the treasures. Don’t die.

Each stage will generally take about two minutes to finish and, as long as you don’t intentionally dodge coins or die, you’ll get at least a C ranking. The D rank seems borderline impossible as long as you’re not physically asleep when you play.  S rank, to its credit, is much more difficult to get and almost impossible on the first run of a stage. This is because the placement of the treasures and coins are fixed but appear rather quickly. SKYPEACE zips along at an almost dizzying rate, and you would do best to not look at the upcoming screen but, instead, keep your eyes fixed on your sprite. Despite the gorgeous splash screen, the gameplay itself boils down to little more than a pixel sprite moving up and down in a slightly different colored skyline.

The music is decent enough, and keeps things upbeat and peppy for the duration of play. SKYPEACE, even though it has clear things like floating evil droids, laser barriers and missiles launched from somewhere, doesn’t do anything in terms of setting up an antagonist or making it clear that you’re skysurfing for peace or freedom or whatever. The title is the only indication that there might be a deeper motive at work, but it’s definitely not something you physically see, read or encounter. It’s almost like trying to prove God by showing how there isn’t any definitive evidence against God. This game seems to be positive and heroic simply because there isn’t anything that indicates you’re the bad guy or that something is terrible. Just the usual errant missiles that might shoot down a couple of anime characters. 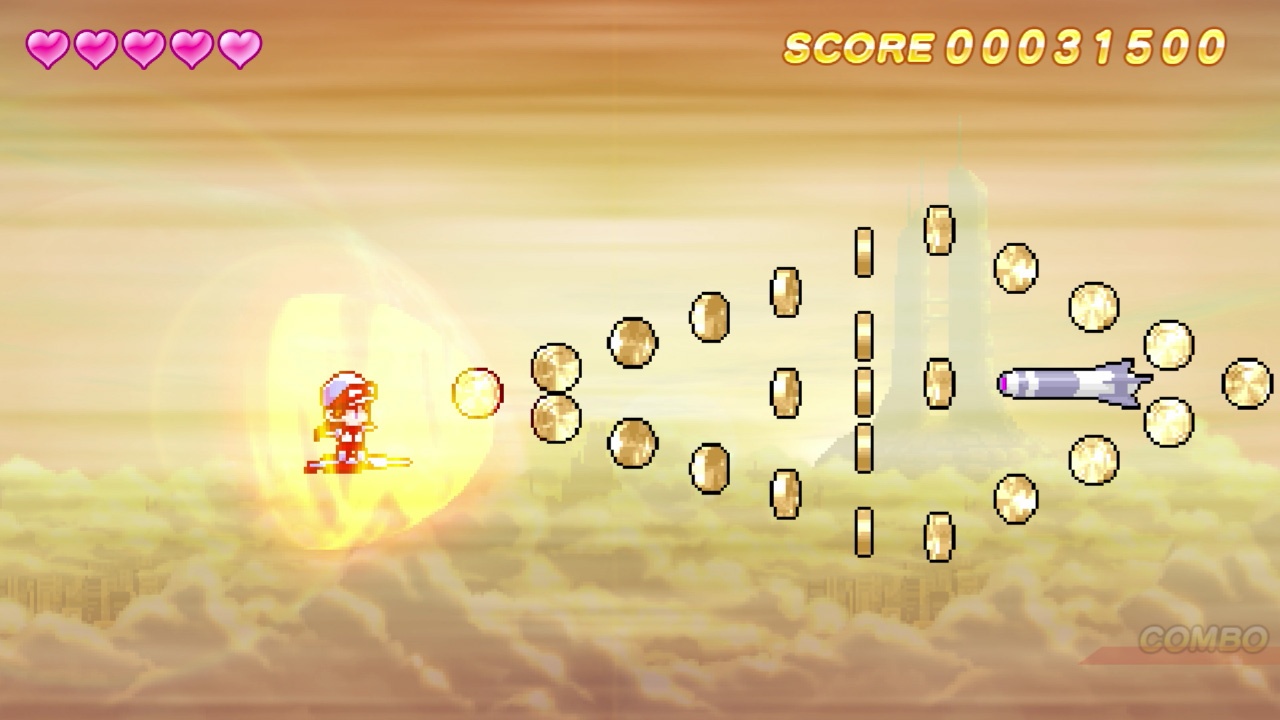 The controls handle well enough, and you have the option of the c buttons, the joystick or even the ABYX if you’d prefer, but the point is you gotta just keep moving around. The only time you’ll get a heads up is if a missile is coming, so, if you want to unlock all fifty achievements that the game bakes in, replay is a must and a given. Strangely, some of the achievements just feel out of place and strange. For example, collecting 30,000 coins in total is a grand idea if the coins could also be used for something. But that’s not the case. You collect the coins for the points total and…that’s all. Like the treasures, one of which is the randomly interspersed UFO. LIke, it’s interesting and I guess, in an arcade fashion, it works, but there’s just not enough here to make it worthwhile.

SKYPEACE falls into one of two categories. For many people, this will be a few minutes of play followed by a shrug of the shoulders and then going to do something else. At the price point of less than a dollar, a lot of players will either avoid it or grab it simply to expand their library. For a select few, however, this will turn into a wild afternoon of collecting and repetitive gameplay to try to 100% the achievements, and, for them, it’ll be pretty damn cool. For someone with mild motion sickness, however, this is a waste of time and even cash. I definitely couldn’t stand tracking the character with my eyes against the rapidly passing background, and, with the only replay value being “get more coins,” it’s definitely not in my wheelhouse. It’s well done and the price is right, but this is just not the game for me.