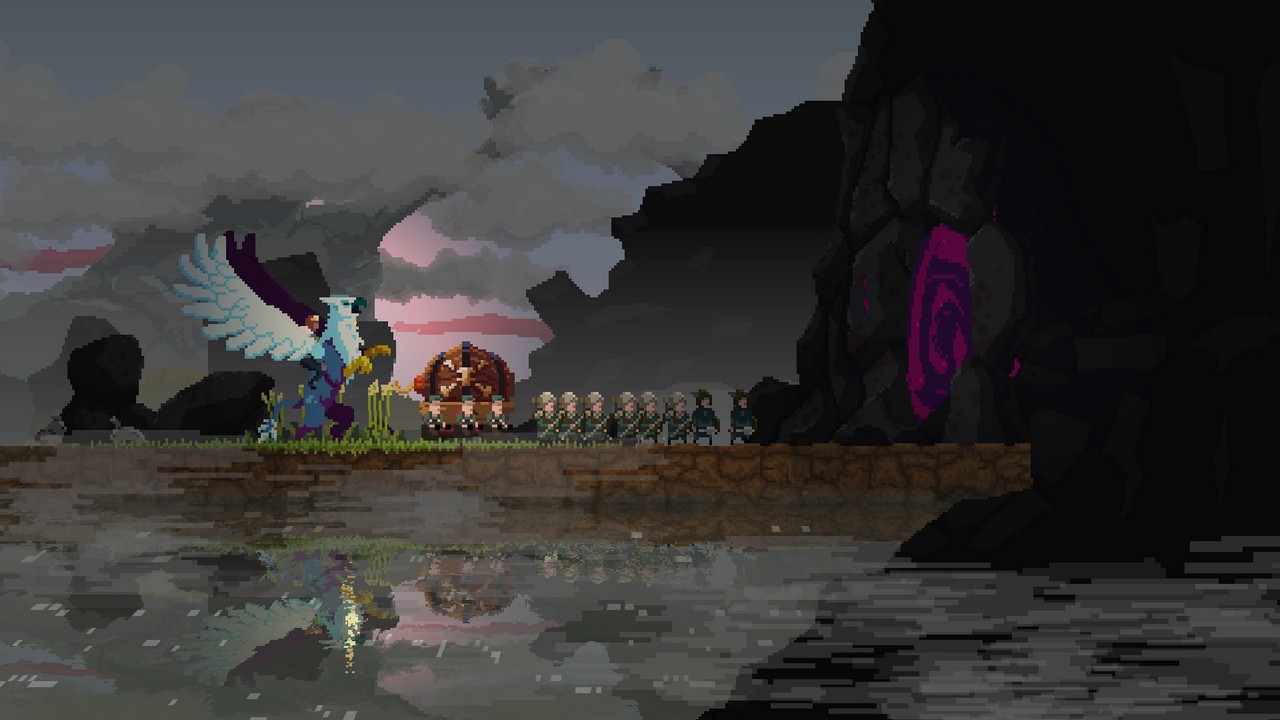 Have you ever wanted to create your own Kingdom, build your own army and ride cool creatures? Well, in Kingdom Two Crowns all these things are totally possible. In this pixelated side-scroller you must build up your Kingdom from nothing, whilst also defending your newly built Kingdom away from the enemy, the Greed.

When you begin Kingdom Two Crowns for the first time, the game will give you a brief tutorial. Build parts of the Kingdom by using coins collected on your travels. It teaches you the importance of hiring new workers and archers and also the importance of setting up defensive walls. But that’s about as much as it will tell you. Most things you find in the game you will have to figure out its purpose yourself, this isn’t a bad thing. I personally didn’t want to be told what a certain thing did, it made the experience that much greater. 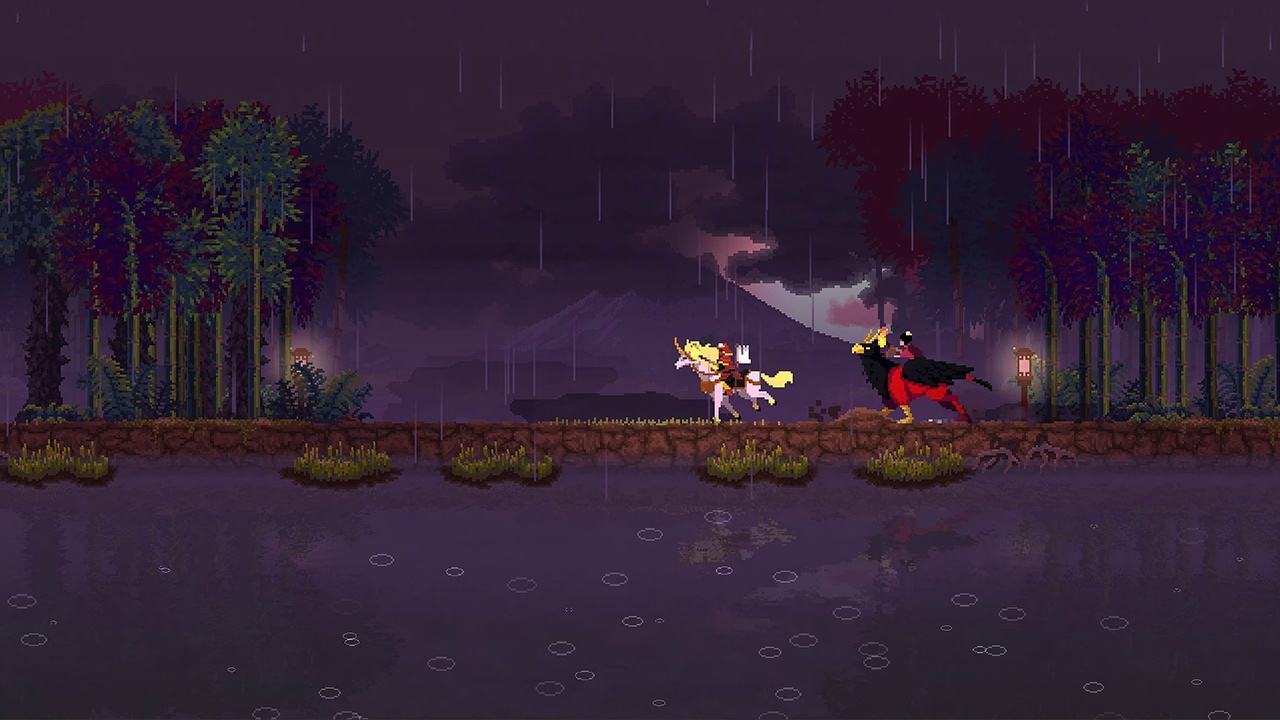 Everything in Kingdom Two Crowns is built and experienced by purchasing them with coins. The amount of coins needed varies depending on what it is you are ‘purchasing’, but it is outlined by blacked out circles above. Some buildings require as little as one coin, other require much, much more. Usually, the more you spend, the better it is though. So, how do you get coins? Well, the main way in order to get coins is to collect them from your archers or have been hunting. Your archers will wander around the map during the daytime and hunt for you. Any animal hunted usually grants them with a coin or two, which they then drop you next time you pass them. Since you can’t attack yourself, you rely on your archers to do this for you. You can also collect coins by finding treasure boxes in the open or by sending certain villagers out on adventures. During the daytime it’s all about building and collecting but come nightfall, that’s when the monsters come out. Known only as the Greed, these little monsters spawn from various portals on the map, rushing straight to your kingdom to cause destruction and steal anything you have. If you don’t have any walls built, you’re screwed. They will kill anyone in your village, including you. Keep your Kingdom secure and your archers will take care of them though. The Greed will certainly try their best to get through your Kingdoms walls though but come morning your Builders will rebuild what was lost. Given enough firepower you can actually destroy the Greed’s portals which then allows you to use them to travel between various lands you have travelled to throughout the course of the game.

It’s also worth pointing out that this game is played whilst continuously on a mount. You start off with a standard horse but you can find other mounts throughout the World whilst playing, and some of the mounts you can find are awesome. You can find better horses with more stamina, stags that allow deer’s to follow you for easy hunting and even a unicorn which poops coins. Awesome, right? Oh and what’s better? This game can be enjoyed fully in a drop in/drop out co-op mode. 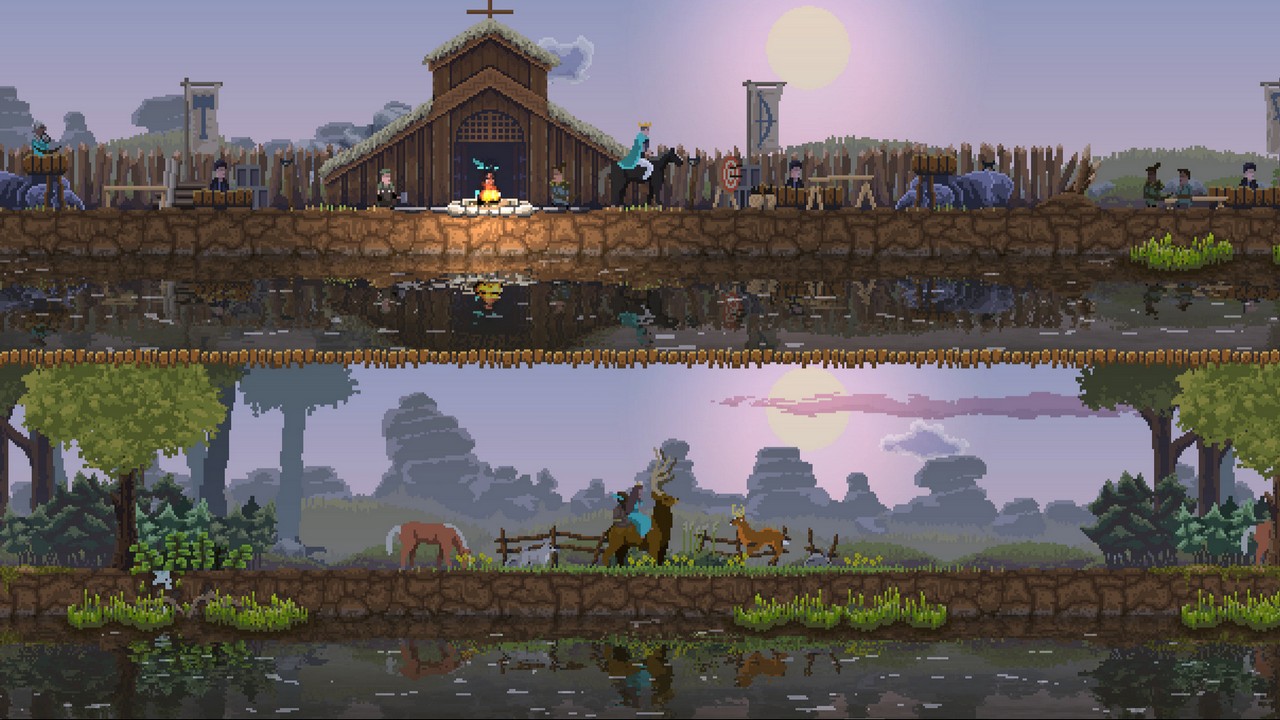 My absolute favourite thing about this game is its art-style. It’s colourful, pixelated goodness and it just looks stunning. There is a constant stream of water on the screen and the detail in the reflection is flawless. Everything that appears on the screen just belongs there, there isn’t a single object out-of-place and the scenery just flows into the background nicely. It doesn’t just look like a backdrop, it’s the World. The soundtrack only adds to the relaxation, its calming and soothing and blends with the art style nicely. It’s almost mystical.

Overall, Kingdom Two Crowns is a fine example of a micro strategy game. It’s fun, exciting and an absolute beauty to look at and being able to share this entirely with a friend ticks all the boxes. It’s pick up/put down gameplay is perfect for those times where you just want to relax without giving it too much thought but can also be enjoyed for hours on end. Kingdom Two Crowns is the perfect game on the Nintendo Switch and should be enjoyed by pretty much anyone who owns one.

Kingdom Two Crowns is a fine example of a micro strategy game. It’s fun, exciting and an absolute beauty to look at and being able to share this entirely with a friend ticks all the boxes.