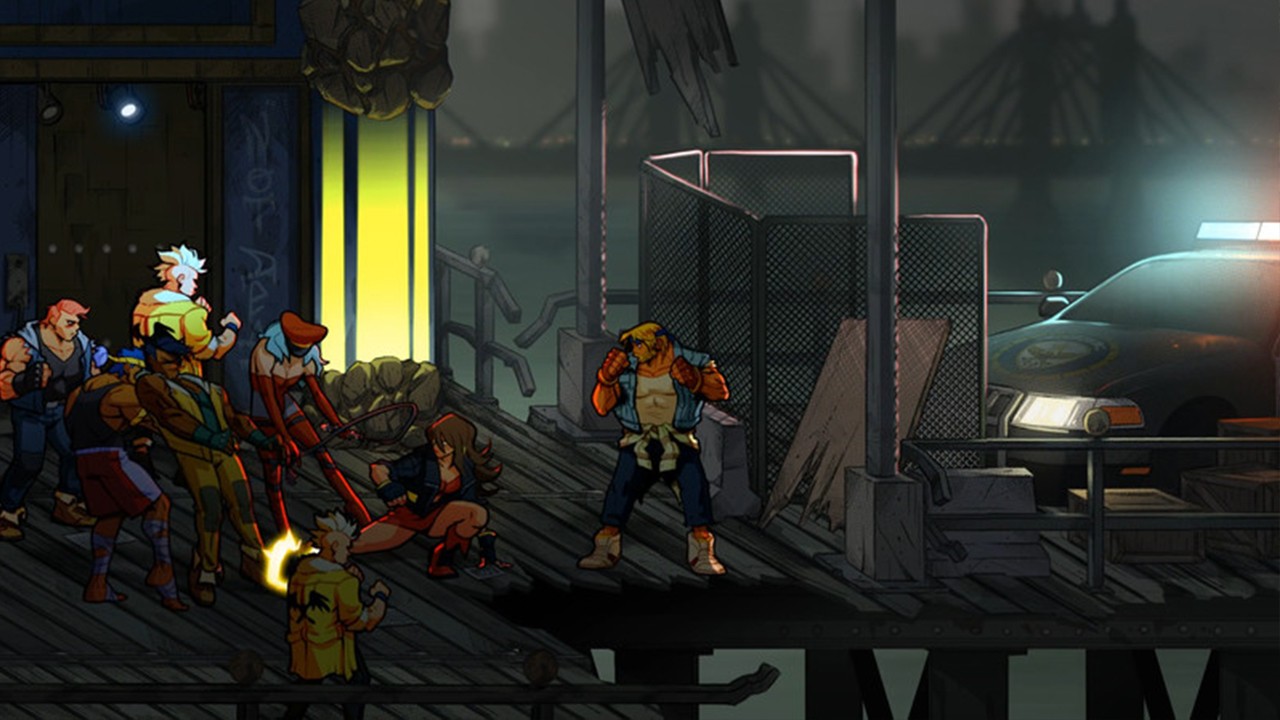 The side scrolling brawler is a gaming experience that feels as nostalgic to me as apple pie or ham and cheese rollups. When it comes right down to it, there’s nothing more sentimental than grabbing a controller and mashing buttons as you walk along an alley, burning apartment or evil building headquarters and punching, kicking and suplexing everyone who gets in your way. It’s you and your bro/sis, or may be just you alone, or, for some really exciting times, you and three other members of the Simpsons family, busting heads with extreme prejudice. Not every title has aged well, and not all of them deserved a sequel (River City Underground and Double Dragon Neon were good, just not great). Yet Dotemu, Lizardcube and Guard Crush have come together to do proper justice and create Streets of Rage 4, one of the finest editions to the anthology of vigilante justice.

For those unfamiliar, Streets of Rage were brawlers that made their mark across nearly every console and arcade, but really got their start (and are most identified) on the Sega consoles. In these games, the evil Mr. X holds the city of Wood Oaks in an iron fist, and it’s only the actions of police officers (and, eventually, former officer) Blaze and Axel that helps fight back and overthrow his dastardly control of the city. They had amazing soundtracks, fantastic character design and managed to keep the grim tone of the violent backdrop balanced with some wonderfully straight faced absurdity. I mean, there is literally a kangaroo in the third game that is, first, a mini boss and then later, a playable character. That’s not to say that the series is totally bonkers, it’s just a good balance of some reminders that you’re playing a video game with the action of beating the hell out of all sorts of thugs and lowlives. In Streets of Rage 4, Mr. X’s children have risen to power, the infamous Y Twins, who we find out are hypnotizing the citizens through music. Blaze needs to get back into the mix, but she’s not alone: she brings back Axel, she invites two new cohorts (who are both connected to fighters from previous games), and she, over time, allows in others to the brawl. And by others, I mean like EVERYBODY. 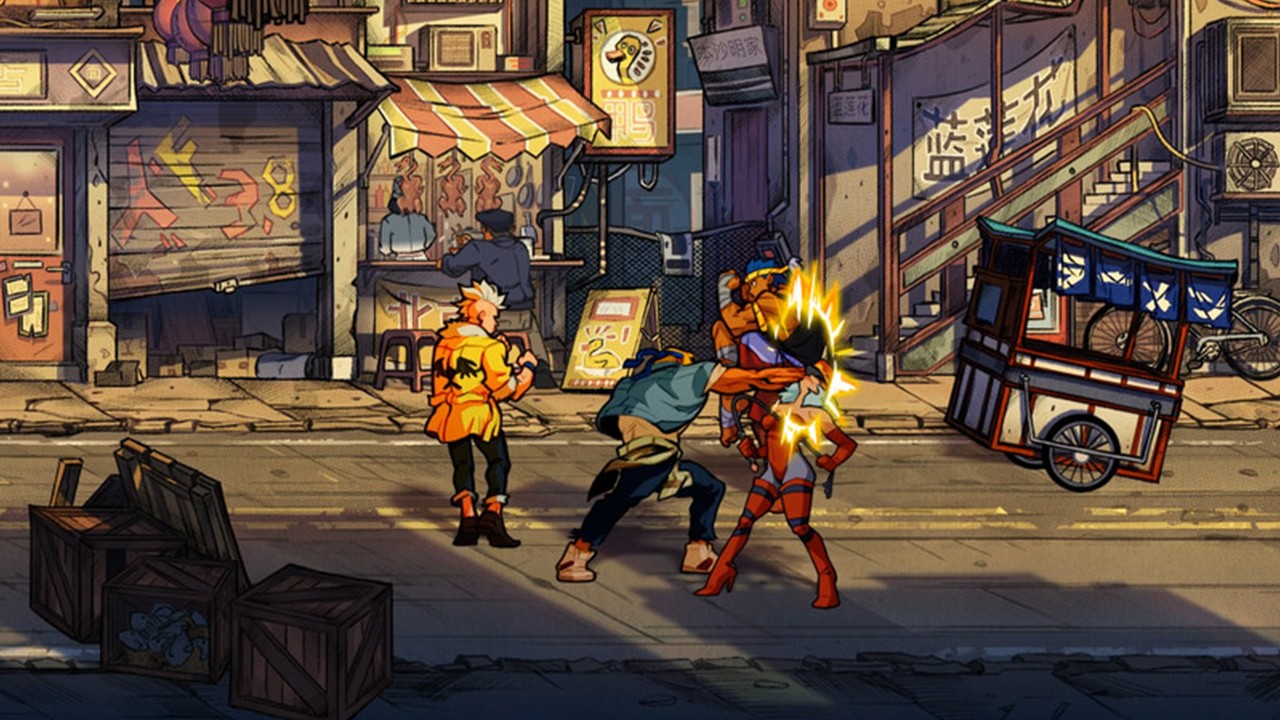 What I positively love about Streets of Rage 4, is that it manages to pull off exactly what it needs to do in terms of homage and modern presentation. Firstly, the game isn’t particularly long, and that fits in well with the series as a whole. Despite the fact that a literal sixteen years have passed since the last Streets of Rage game, Dotemu and friends pick up and keep the ball running in the same vein as the previous entries with no dip in quality. The game clocks in at roughly two hours, putting it almost exactly on par with the last couple of games. In those two hours, your character goes everywhere and sees everything. From the streets to the prison, from a corrupt kitchen to an underground fighting ring, from the top of a moving train to the interior of a massive fortress (how the hell did anyone build that in today’s society?), this game goes and sees everything, and it’s fantastic. It manages to showcase a lot of places that feel familiar to longterm fans of the games without just being a clipshow, and also throws in a lot of new locales and ideas. Not to mention, since Story Mode is mandatory before arcade mode, it’s the perfect serving of fighting and exposition before turning you loose with Arcade Mode.

The controls of Streets of Rage 4 are tight as a drum, which is beautiful for a brawler like this. Your character always moves with purpose and deliberation, comboing up punches and kicks with different grapples and explosive power moves that feel unique to each character. Whether you want to get in the powerful kicks that Blaze delivers or the literal iron handed whacks from Floyd, you get into the groove and feel the power of each character within seconds of slipping into their role. What’s truly awesome is that the characters, despite being quite different in presentation and in execution, are all fluid enough that you can change hats and be situated in what you want to do in the fight without missing a beat. If you are doing couch co-op (which you might as well because it’s more fun together), you work out the teamwork aspect fast and then go to town. I love that the shorter term power moves that eat up a small portion of your health and let you win it back by hitting the baddies without getting killed. The Star Moves, which are ultra hits that require finding stars to use, are powerful enough to help clear the room when mobs are too dense, but don’t spell an automatic KO for the variety of bosses that you encounter. The hit boxes are incredibly tight as well, meaning that your chance of missing an enemy if you’re on the wrong plane is high, but you also probably aren’t going to run into that problem.

It won’t be a problem because Streets of Rage 4, hands down, is the best looking game in the series and one of the best looking brawlers I’ve seen in a long, long time. Don’t even mention the artwork: we all figured that the powers that be could improve upon a look that was last conjured in 1994 (that’s pre 32 bit era!), and, sure enough, everyone and everything pops and has a fantastic style to it. I’m talking about the animation. Holy Gods, did they put the pedal to the metal when it came to animating Streets of Rage 4. Everything, from the straightforward punch and the simple meandering gait of Axel to the explosions on the screen or the mainline of gas venting in the underground sewers looks amazing. There’s so many extra frames of animation that things simply glide and melt across the screen, like I’m watching a game that should be designed for the next generation, not this one. It’s a pleasure to see Axel explode with his uppercut, or see a police officer taze you, or even see the lick of flame come out of a firebreathing baddie (yes, there are those in this game). There’s so much eye candy within the game that you can’t help but love it, and it never stops delivering on that level of quality. 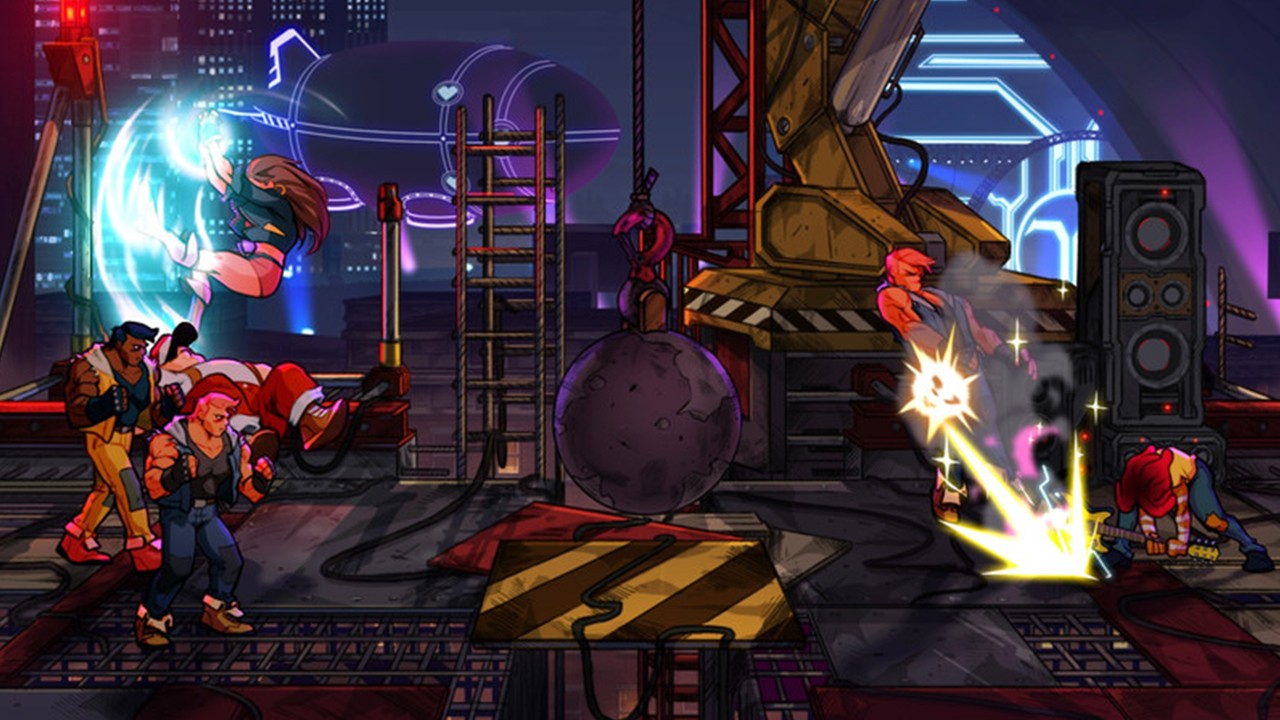 What seals the deal for Streets of Rage 4 are the little things that amass into one huge thing called “presence.” Streets of Rage 4 has a presence about it that commands and delivers the whole time you’re playing. The banging soundtrack has subtle shifts into different tones that are fitting yet solitary when you encounter a boss. The way the corrupt police officers will attack the thug mobs as much as they attack you, and so you can actually find a place to hide to let them duke it out for a moment. The sheer, ungodly number of unlockable characters that come into play for arcade mode once you put the time in and bring back familiar faces from each and every game to help you keep kicking butt time after time. The fact that I played this game solo because I only have a Switch Lite currently, but I made a makeshift stand and handed a controller to my daughter because I knew she’d want to come stomp along with me for just a few minutes. The game is the real deal, and it’s exactly what it needs to be.

There will always be new brawlers with different perspectives, and people will always have a special place in their hearts for one game or another. The fact remains is that Streets of Rage was my favorite series on the Genesis, and I have fond memories of playing it in elementary school. Streets of Rage 4 certainly taps into those memories, but it does more than that: it creates new memories all on its own. If you want a great way to punch away the day with a friend or by yourself, don’t hesitate: take it to the streets.

Streets of Rage 4 brings you back into the world of street justice, and it has, sincerely, never looked or felt better.