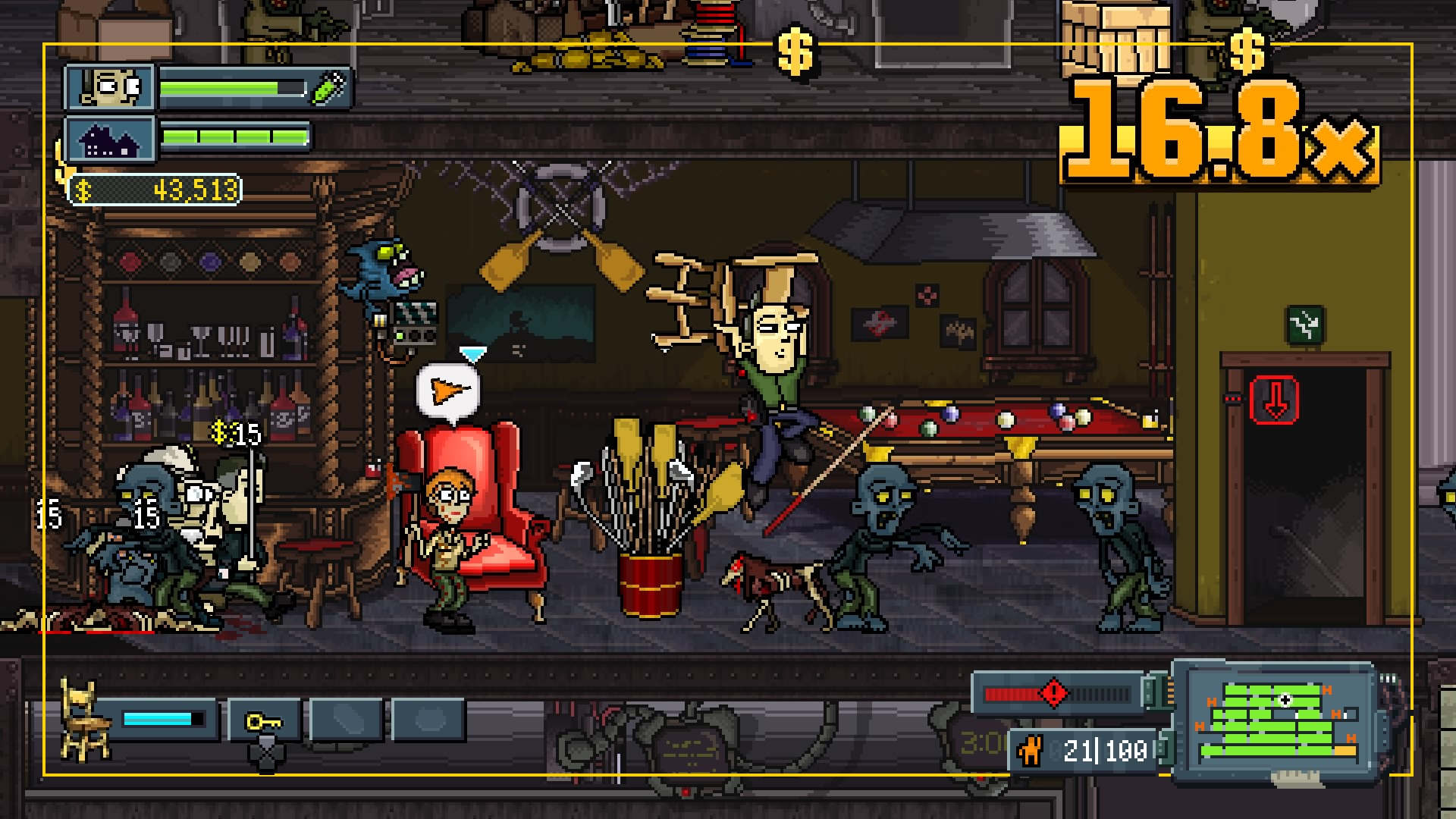 Are you a fan of retro arcade style games? Are you a fan of horror movies? Well if the answer to both or even just one of those questions was yes, then I think I have the game for you. Developed by Webcore Games and Published by bitComposer Interactive GmbH, My Night Job is a game reminiscent of Arcades past, which is sure to fill you horror lovers with a strangely warming sense of nostalgia.

The premise of the game is rather simple, you take control of the protagonist, who by day is just an ordinary man, but by night he is defending his fellow humans from oncoming attacks from creatures of the night, ranging from bats to zombies and a whole other assortment of monsters. As stated above, whilst the premise is rather simple it is to be somewhat expected of an arcade-style game, if you are expecting a complex and deep narrative then this game may not be for you. I do wish there were a little more meat to its bones, even if it was just a tiny plot twist or something! But I digress. For you horror lovers (I promised there would be something for you!) there are many Easter-Eggs scattered throughout the game, which you will be able to immediately able to pick up on. I won’t spoil what Easter-Eggs there are, as part of the fun (for me at least) was finding and seeing them for myself. 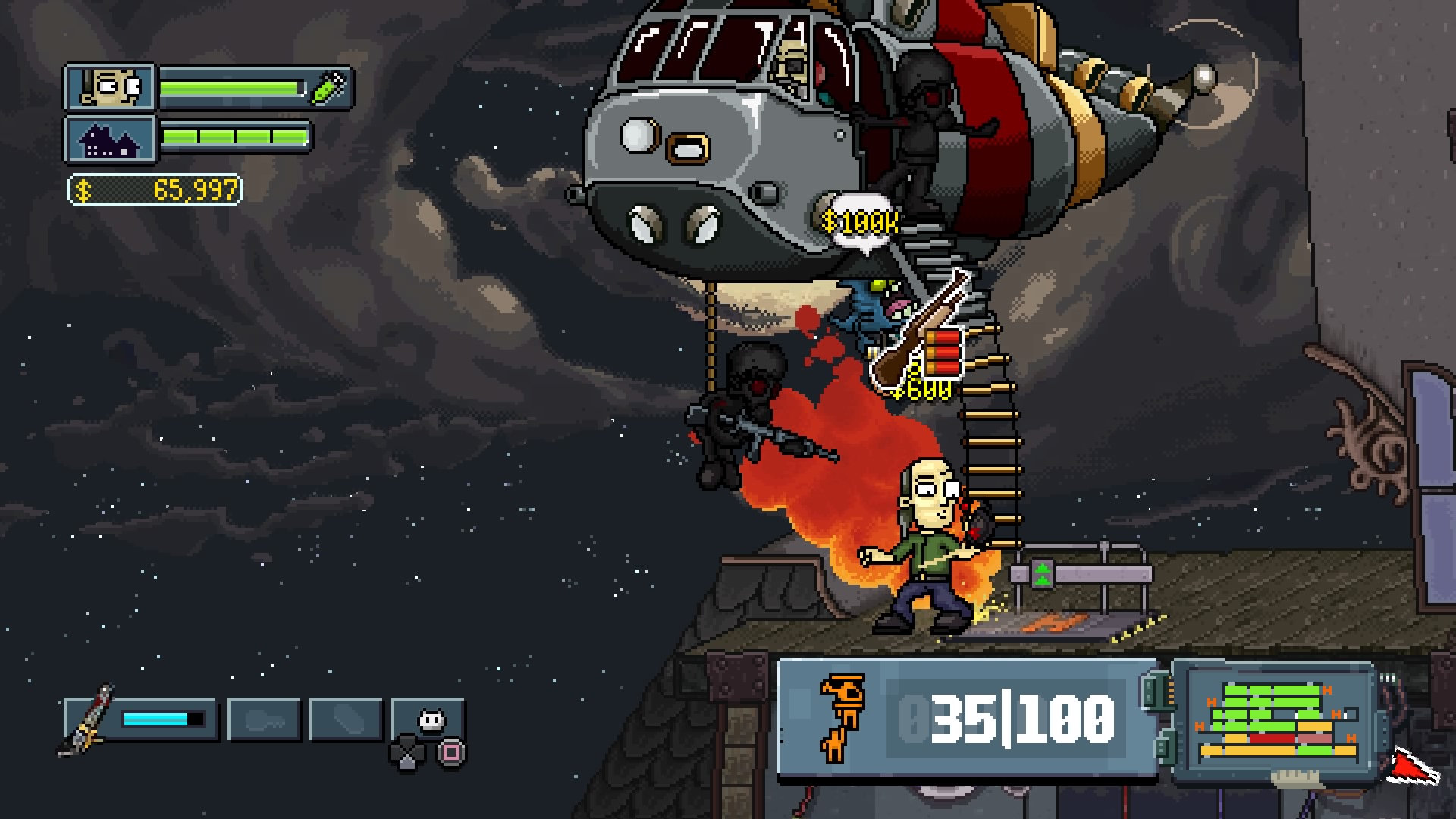 Much like the premise, the gameplay is rather simple. As I mentioned before, you will need to battle these monsters and safely evacuate your fellow humans from the mansion. Some of these humans will assist in your quest and will in fact combat the monsters alongside you. The other humans however… Yeah they just sit there cowering, which can get very frustrating at times, but this is a minor nit-pick as without these challenges the game would be a little too easy. An interesting part of the gameplay was the map of the mansion. Certain areas of said mansion, would be so packed with monsters that it would be impossible to reach from certain directions and instead you would need to take a different route. I found for an arcade game, the map is both immersive and intense, I had to actually think about my technique and tactics, instead of simply button mashing. Truly Webcore should be commended for their work here.

If you read my other reviews, you’d quickly learn that one thing I cannot stand about Arcade games are its annoyingly repetitive background music. And I am sad to say My Night Job is no exception to this rule. I must preference this by saying that this may just be a problem I have, and that most people probably don’t even care about the music, but I just can’t sit there and listen to the same thing again and again, so I found myself muting my television at times – Side note another reason to keep your TV on mute is the screams from the humans and the moans of the enemy monsters. Both get very old, very quickly… Again maybe this is just me, maybe I’m just a sound snob.

The graphics of My Night Job are everything you’ve come to expect from these retro style games, they are well designed with modern machinery, but still have that pixelated nostalgia goodness. I personally think for this game specifically, Webcore made the right choice in giving it a nostalgic feel, as it just added to the overall feel of the game. If it were designed like any other 3-D game out on the market, I think it would lose its appeal. Whilst a horror game, the game isn’t necessary scary, and I think in large part this is due to its design. It feels more like a game you’d play as a kid on the PS1 or something, rather than a cheap, jump scare filled horror game. 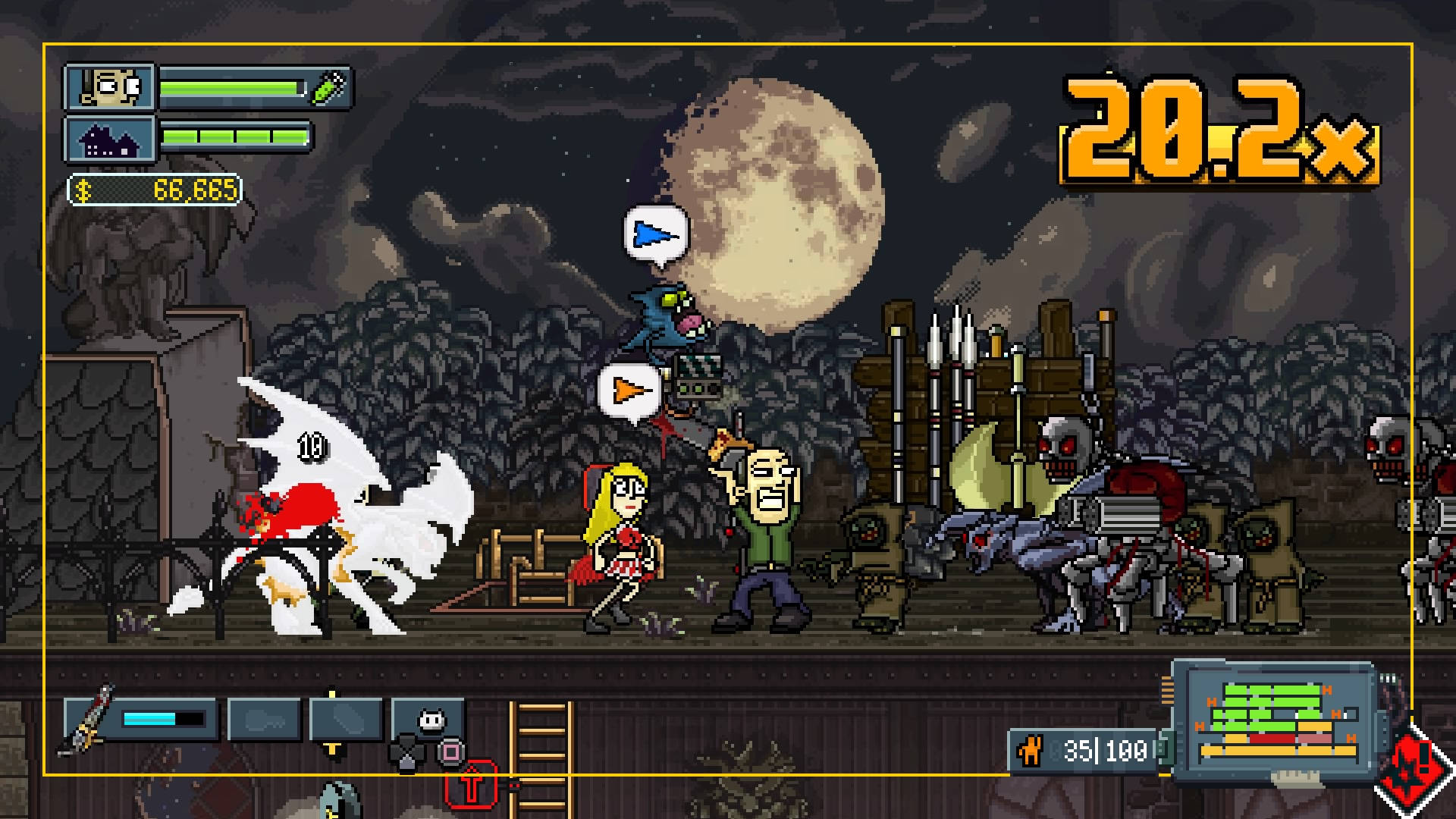 If I were to change anything about the game it would probably be the protagonist. I understand that he is supposed to be this everyman, someone who is designed for the players to transfer their own personality onto, someone who is so effortlessly plain that its borderline boring. I would like just a little more development into his character, like is he like Buffy in the sense that he is once in a generation monster slayer? Does he do this just for fun? Who is he and why should we care?

Overall, I really enjoyed playing My Night Job. The game is so effortlessly fun, that I found myself losing several hours to my PlayStation. The only thing that really stops this game from getting a perfect score is the minor details, such as the music, sound effects and lack of character development. Currently retailing at £6.50 on the PS Store, I would say that this game is worth the price. It may be too simple for some, but it is certainly enjoyable and I will certainly be recommending it to others, who I know are fans of this style of game.

It may be too simple for some, but it is certainly enjoyable and I will certainly be recommending it to others, who I know are fans of this style of game.