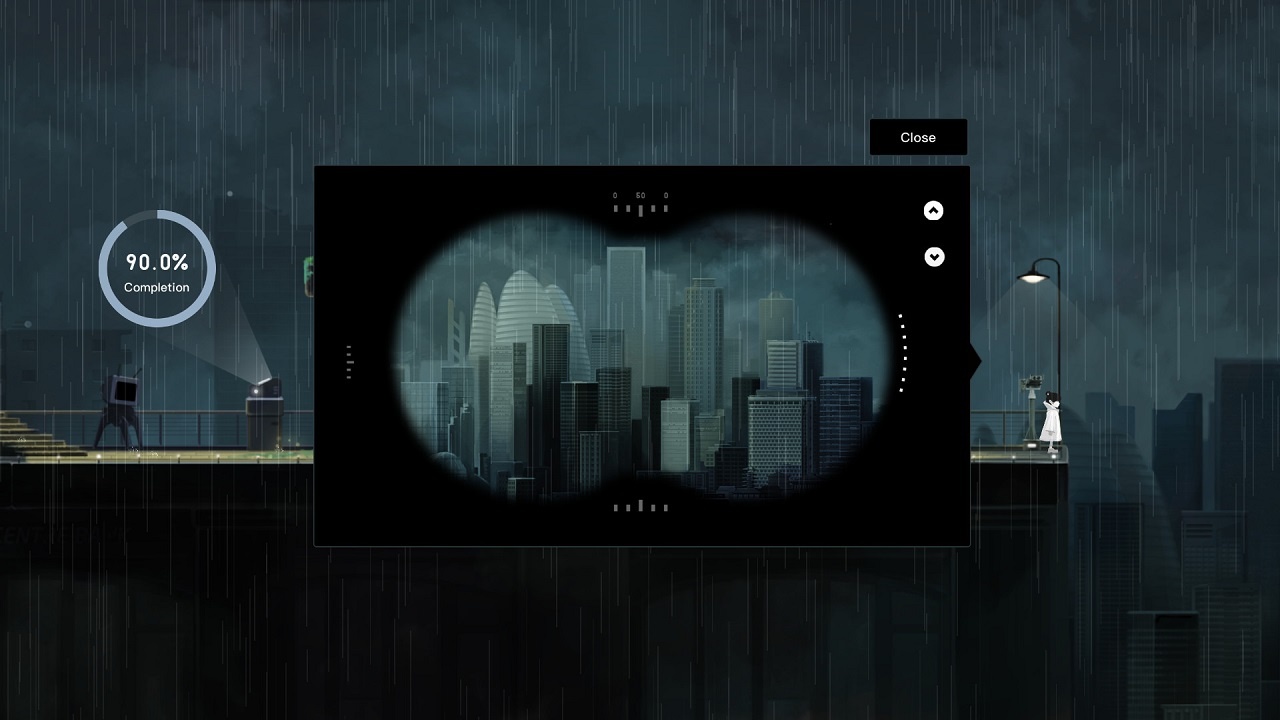 If there’s one thing that can be said about the genre of puzzle games, it’s that they can come in a variety of guises. Some of them are presented in a simplistic fashion, containing just the elements it needs, titles such as Wordsearch by Powgi or Piczle Lines are good examples of this, as all they need is their puzzle mechanics in order to work. Other titles though, sometimes contain or even need, a little extra presentation for them to work. Take Sling Ming or Warp Shift for example; on their own, the element of just containing puzzles wouldn’t work and they need some form of story, or quest to work alongside them in order for their mechanic to work with some meaning. This is also the case when it comes to Flood of Light, a new puzzle-platformer/adventure game that is out now for the Nintendo Switch.

Developed and published by indienova and irisloft, this 2D puzzler sees you journeying through an adventure with a small girl, known only as The Guide. Within the midst of a flooded and deserted city, you utilise your power of harnessing light in order to activate a number of control schemes in the hope of restoring the once, technologically thriving landscape back to life. This is achieved by finding light sources, harvesting their power and transferring their energy to a series of nodes and, in particular, specialised beacons called Monoliths. By restoring power to the landscape, the risen waters of the flood begin to recede; opening up new paths and levels as you delve deeper into the story of the city and its inhabitants.

With each level traversed and monolith activated, you enter into a lift; taking you down to the next level where another flooded area requires activation of its nodes. Each one lowers the water, which in turn leads you to the end-level monolith. It’s a simple premise, with most of the mechanics of each puzzle remaining within the same framework for each level. However, the deeper you delve into the depths of the flood, the more challenging each puzzle becomes with its distribution of power and sequences of activation. In order to be successful, the need for accuracy becomes paramount, as you need to be exact in how you distribute the collected pockets of light energy in order to be able to advance through each of the levels. It’s a very unforgiving mechanic, as the slightest miscalculation or mistake forces you to restart and rethink the current level. 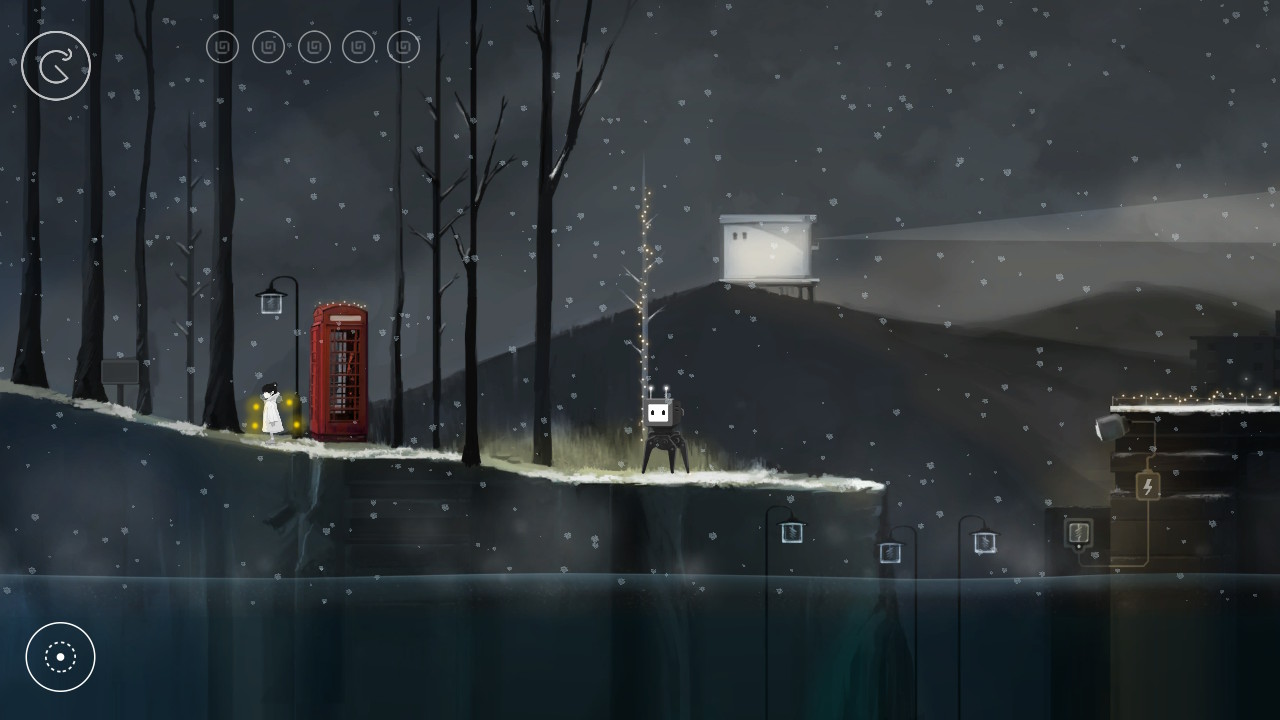 The game works with you controlling the guide, using the left thumb-stick, across the two-dimensional platforms of each level. Within certain pockets of energy, street lights still glow with energy and by using the Y button, you gather their resources within a ball of energy that radiates around you. As you progress along the level, certain areas become impassable due to high waters or blocked access routes. However, a series of connected nodes are located nearby and by using the R button and right thumb-stick, you evenly distribute your harnessed power within each node; which in turn, creates a flow of energy through singular wires until a switch is activated that either opens the path before, or lowers the water to reveal new locations.

The core mechanics of the gameplay, as well as its simple control scheme, produces a game that is easily accessible and works effectively. The element of garnering light energy and distributing it amongst the power nodes is very straightforward in its execution; although as you progress, the game throws in extra elements to increase the challenge in what it has to offer. From colour specific variants of lighting to moving platforms and varying viewpoints, there is plenty of variety here to help mix things up and keep the puzzling fresh. However, these extra inclusions also ramp up the difficulty significantly, often producing moments of head-scratching as you study the level in order to work out the best solution for progression.

This isn’t just your basic puzzler though. In order for its presentation to work, the whole game also revolves around a story that is told through various interactions with a series of lone, broken-down robots that litter the levels. By repairing their sorry state with the A button, you learn of the constant downpour and the robotic forms’ struggle to stop the falling rains and rising waters; a battle which was duly lost. Told through a series of narratives, the story presents itself in bite-sized chunks; presenting a text-heavy element to the gameplay, but is also one that lays a bit thin on the ground in its execution. 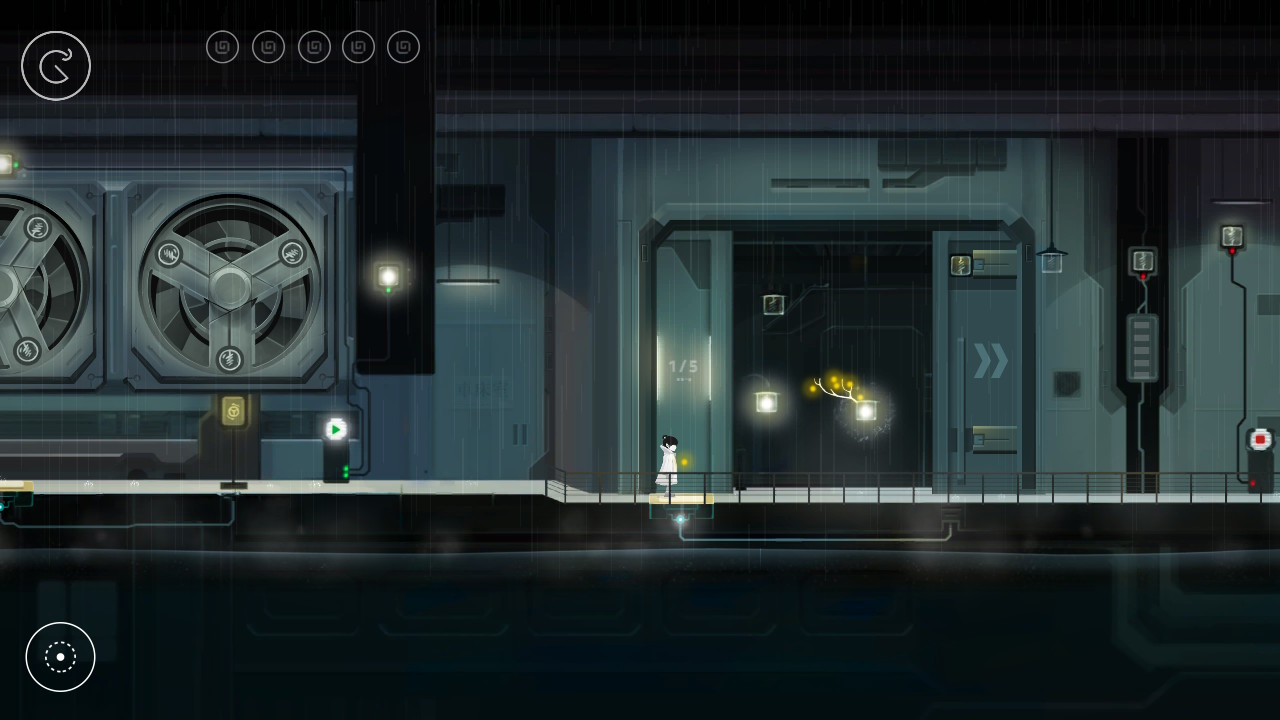 It feels as if the inclusion of the story has been simply bolted on to the game to help flesh things out a bit. Admittedly, it does help to create a break from the fifty or so puzzles that await, but its plot and themes soon begin to wear thin; creating a feel that they are largely unimportant to the game itself and add no hunger to search out the remaining bots and their largely, uninteresting tales. This premise is further bolstered by sloppy grammar and punctuation throughout; making it a very frustrating read. It’s a shame really, as the graphical presentation and audio qualities of the game show a distinct feel of effort was put into their execution; thus bolstering the inescapable feeling of the story being bolted-on.

Each of the levels are nicely detailed, with clean, crisp graphics that paint a suitable picture for its setting. Its soundtrack too, also matches the mood of the game; although its looping piano tones can grind after a while and may not be to everyone’s taste. Its puzzles too, are suitable fleshed out and challenging. However, the overall presentation of the game, incorporating all of its elements, can’t help but produce a game that, whilst it is a relaxing affair, feels cumbersome and slow in its progression and, ultimately, quite dull in its gameplay. The dreariness of its surroundings and sombre moods of its piano riffs do combine to produce quite a dismal setting; resulting in an overriding feeling of misery or depression as you play, despite some elements of the game being quite fun.

Overall, Flood of Light is an interesting premise in terms of its puzzling mechanics. It offers a nice challenge and suitable difficulty level along a finely balanced curve. Its simplicity, both in core gameplay mechanics and controls produce an instantly accessible game and relaxing experience. However, despite its elements of playability, an ultimately lacklustre story, slow pacing and grey, sombre setting do end up producing a game that feels rather damp, rather than flooding us with any form of light entertainment.

Although adventurous in its puzzling, its lacklustre story and sombre setting produces a damp game rather than a flood of light entertainment.