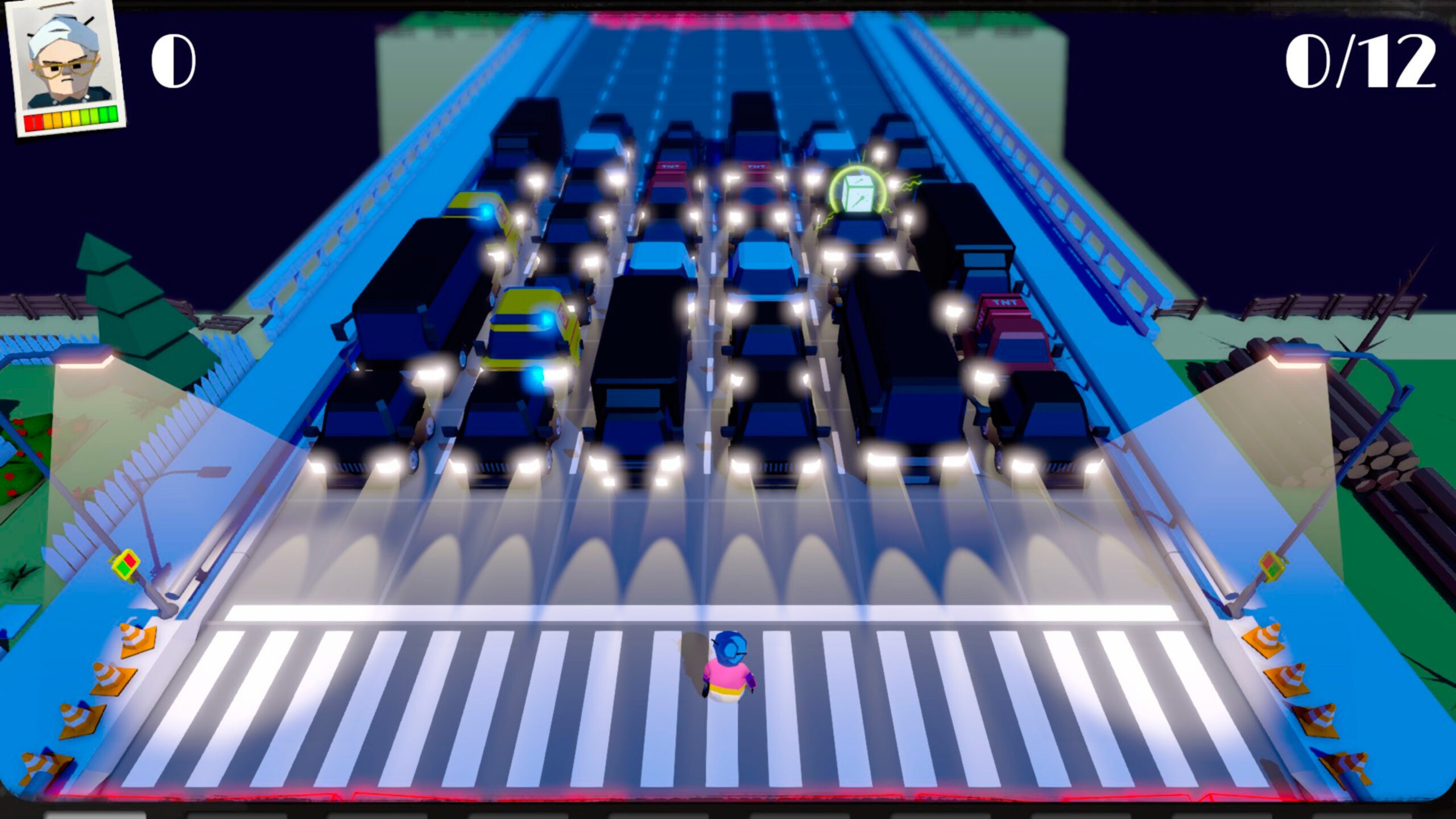 I think everyone dreams of a quiet retirement. The little quaint cottage in the middle of nowhere, where you live out your final days peacefully. The sound of the birds chirping, and possibly a little babbling brook running at the bottom of your beautifully designed garden. What no one wants is a massive A road being built outside their house, and all the traffic that comes with it. This would be enough to drive you mad, where you have to take action into your own hands. This is the concept of my latest review title CrossKrush. The sweet old couple (Henry and Florence) simply wants to relax with a nice cup of tea, while listening to music, and watching Countdown on the TV. Instead all they can hear is engines roaring, and horns beeping. It’s time to sort this out the only way that they know (and that’s not to moan about it), they are going to blow up and hit every car with their walking sticks.

Developed by Thinice Games and published by Ratalaika Games, this is a puzzle title with an explosive twist. You control one of the 2 old people, whose only aim is to stop the cars before they reach the zebra crossing. Everything that you do either awards or deducts points from your total score. Once you have completed a level, your final score will be calculated. There are 10 stages that you must complete, each with 10 waves of action. For those who are not great with their maths, that’s a whopping 100 levels for you to take on.

You may think, “It’s a little thin on gaming concept!” It’s true to say that the premise is straightforward, but there is more to this game than meets the eye. All the cars will move from North to South, and the street is split into singular squares. Each of the moves they take fills one square, and you must plan how to destroy all the vehicles by marking the floor, and blowing each one up before they make it to the goal. You will face ordinary cars, vans and lorries. But you will also see TNT explosive vehicles, and white vans that have special powers. These should be destroyed at all costs, what you should not touch, however, is the ambulances, this is just common sense, but in this game destroying an ambulance will mean all remaining vehicles racing to the finish, causing you to lose a heck of a lot of points. What about the TNT and the white vans? One blows up everything near it, and the other allows you to destroy a group of vehicles by marking the surrounding squares. 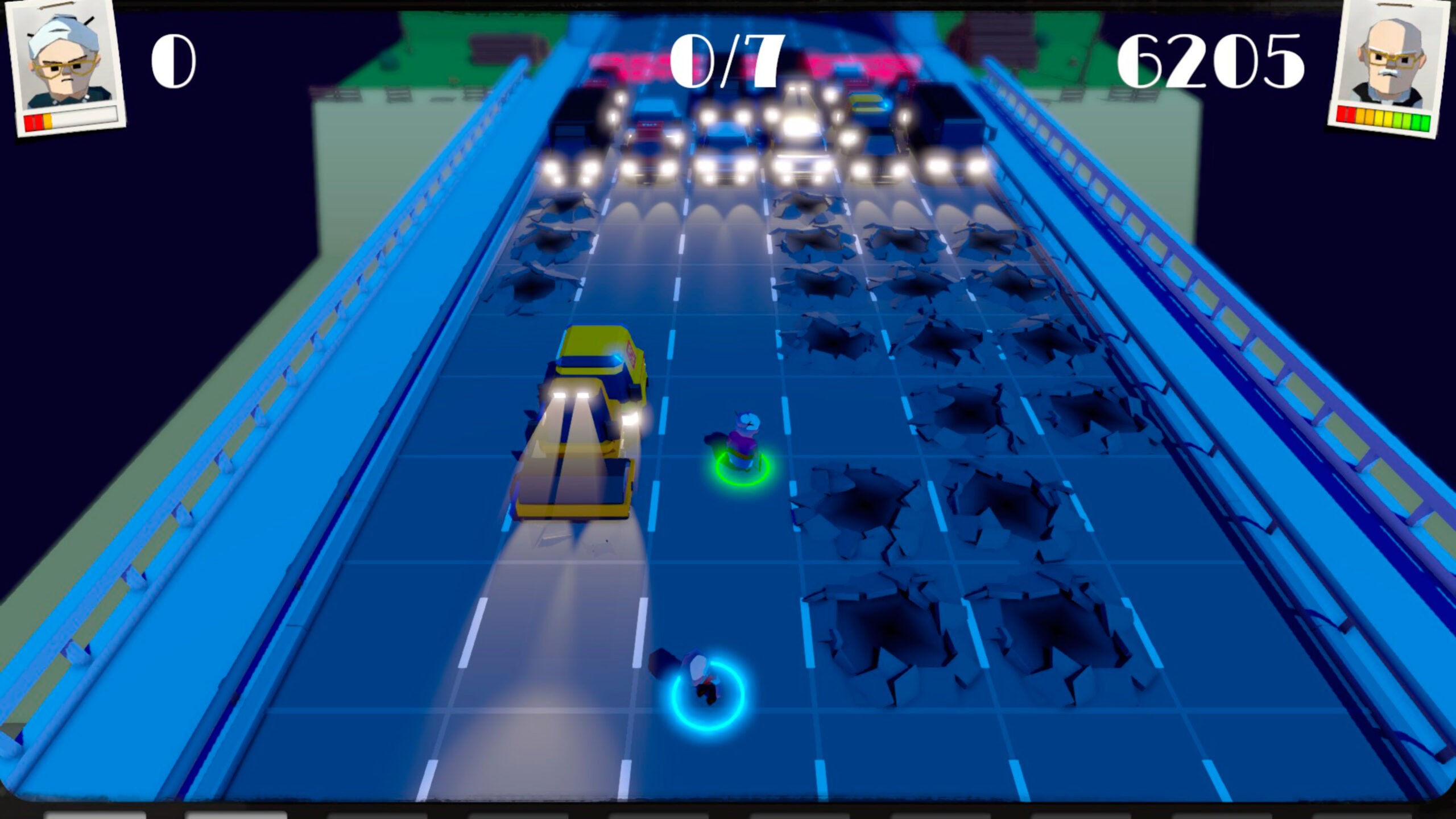 If all these ideas of blowing up vehicles on your own seem like a lonely existence, you can ask a friend to join you in a local co-op mode. Together, this powerhouse old couple can work for each other, or against each other, as you both attempt to bring some harmony back into your life. Though the addition of cooperative play was fun, and finding a like-minded individual in your house to play the part of your old husband or wife was amusing, it didn’t really add too much to the game. If more co-op specific levels were added, or different objectives were the focus, then it could have been a great addition. As it is, I think I’ll stick to the solo play.

The puzzle element wasn’t that challenging either. Each wave indicates the perfect number of moves for completion. A move makes up anything that destroys a vehicle; an explosion, a beating with a cane, or you detonating your active square. If you over cook the number of moves it matters not. The penalty? A loss of points, but the wave is finished, and you can proceed. There is only one element that will stop you moving on, and that is death! Both of the old cronies have a health bar, each time they are struck by the traffic it reduces until you lose that last slither of remaining life, and its game over.

The action plays out from a table top perspective, you have a clear view of everything that is happening, and the position of all the cars in each level is highlighted with a red template at the start of every wave. The stages flit between a light and bright daylight theme, or a dusky night time view. The colour palette reflects each of these times of the day nicely. The graphics are of a reasonably good standard, but not what I’d expect from a modern generation title. Everything runs smoothly, and though it’s not the toughest puzzle game you will play, it was still nice that you were able to easily plan what you wanted to do.

If you love Jazz music, then you are going to enjoy the audio that plays alongside all the explosions.. It’s upbeat tone works well with the character models, but was an odd choice to have alongside wanton destruction. Also, the sound effects were a little flat for my liking. All the crashes and bangs were lifeless, with no real oomph to them. I wasn’t expecting my eardrums to bleed due to the cracks and thuds of cars being destroyed, but I expected more than what was delivered. It was slightly disappointing, and the weakest point of CrossKrush. 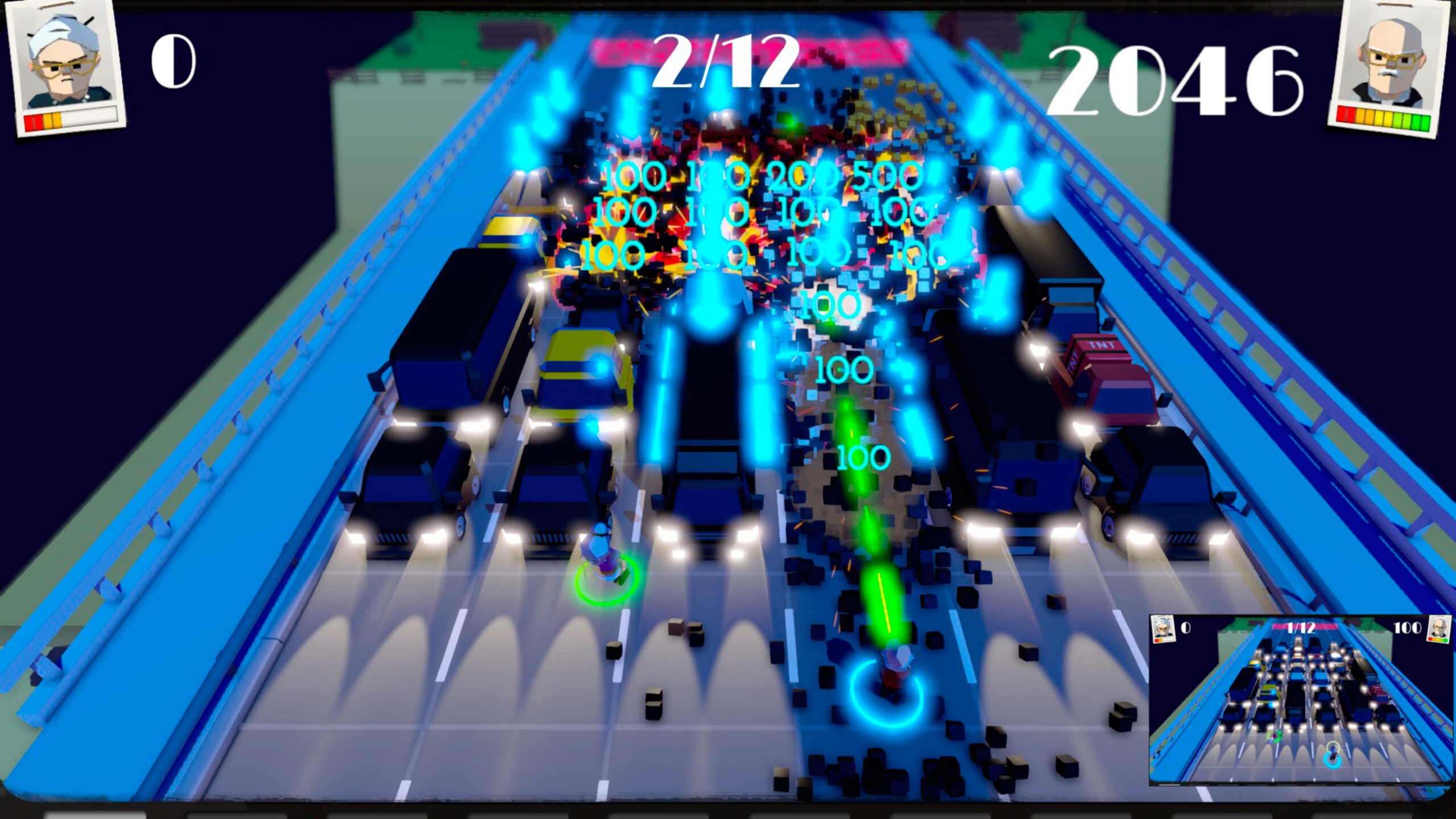 When a game is essentially about setting traps, blowing up cars, and hitting things with your walking stick, you’d expect the controls to be simple. You’d be right! This was why I was shocked when the game opens with a 9 page spread on how it works. It seemed a bit of an overkill, and could have been made much clearer with a short tutorial. If you decide that you want to play this game, don’t be put off by this, just jump into the first level, and you’ll soon master the straightforward control setup.

Would I say that I want to return to play this, now that I’ve finished it? I probably will, mainly because I want to beat the high scores that I’ve achieved in each level. If you also take into consideration the 5 play styles that you can choose from; Normal, Delicate, Fast, Broken, and finally Last Will, you have a lot to make you want to play again.

I never thought I’d play a game where I helped an elderly couple blow up cars on their street. Well, I can tick that off my list of things to do! A straightforward puzzle game that will not push you mentally, but will get you thinking a few steps ahead, like a game of chess (if it involved old people and cars). The additional modes add some replay value, and the cooperative play will give you a laugh with a loved one or friend. So, do I recommend it? Yes, but it will not test you, and it won’t take you that long to complete, even if it has 100 levels to get through. Grab your stick, put on your beige trousers, and show those cars who’s the boss.

A table top puzzle title where destruction, and old people meet head on. Plan your moves, and destroy anything that moves.