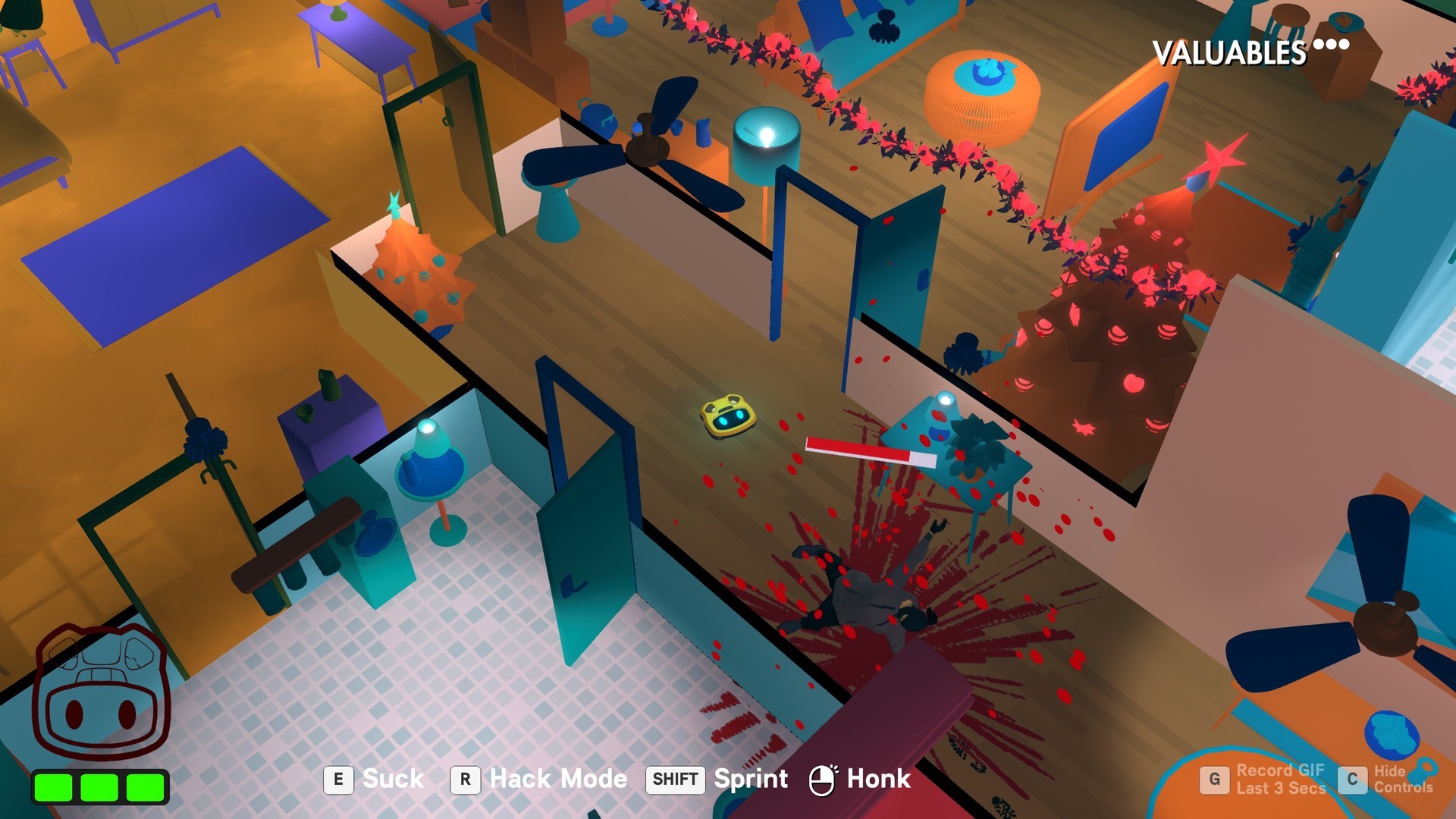 Roombo First Blood is one of the best ideas for an indie title in some time. You play as a sentient Roomba who’s guarding the home from thieves while the family is out; you do this by hacking household electronics like fire sprinklers and making electrical sockets explode to stop and murder the intruders. Once you have stopped the thieves, you have to clean up the footsteps, blood and bodies within 60 seconds, and that’s pretty much the whole game, unfortunately.

The house you guard is exactly the same in the measly six levels, and the only thing that changes is the number of robbers and the number of valuables they can steal. Despite it being repetitive and simple, it’s still so engaging and hilarious to be a Roomba murdering people, plus for replayability, there are letter grades for how much you can clean up the mess you made which is a nice addition, but as mentioned it is only 60 seconds, and I wish it was slightly longer. Things that affect your letter grading of each level can be the accuracy of traps you set, and the deemed ‘success’ of protecting the house which is just keeping the valuables within the home. What you do experience is clever, unique and most importantly fun. 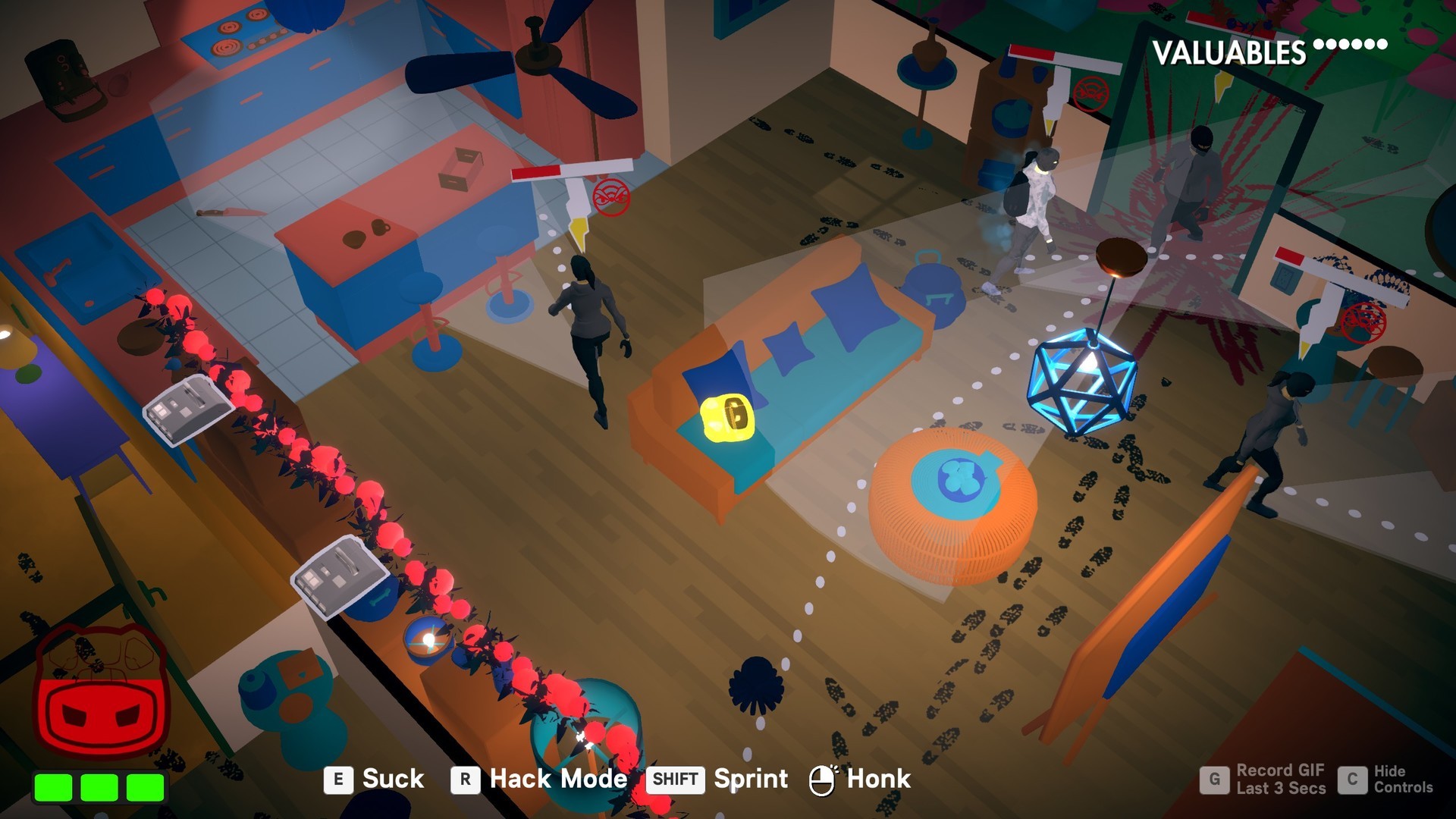 The visuals are a step above a general Indie title and the actual character design of Roombo is excellent. The rest of the house looks like Sims-Esque furniture that’s realistic, but coloured in a cartoon fashion. The robbers that come through are either generic male or female character models, which is frustrating as it could have had different clothing for models at least. As for all the valuables that can be collected there is jewellery and technology to be stolen, when the thieves are attacked it drops as a big cartoony duffle bag with dollar signs on it which really fits the world and is also an objective to keep the items within the home.

The animations are playful but generic, again, it comically portrays the thieves deaths with spraying blood across the room and having perfectly cut ribs and steaks bounce against walls like they are used within a dodge ball scrimmage. The ‘hacking’ of appliances also is generic, but the sound effects with them creates a satisfying kick whilst you maim your prey. 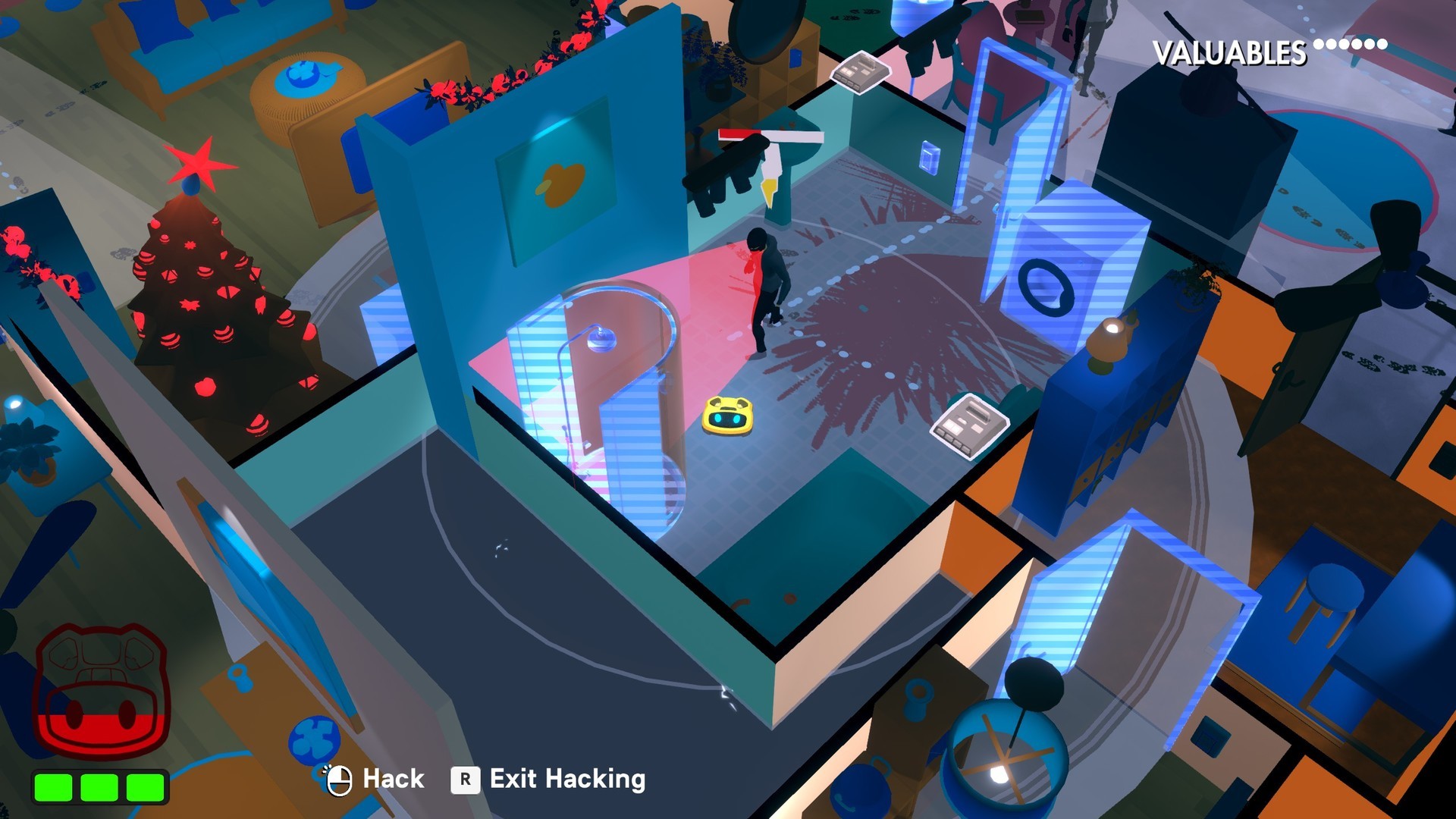 The sound design is overall well thought out as the first part of each level feels like a thriller/horror movie with a James Bond element of sneaking around but also brutally maiming the intruders. After the fun has happened, it immediately switches to angelic and joyful music which the juxtaposition is great, all the traps and sound effects make it feel like a somewhat real experience besides the Roomba apparently having a buzz saw in it which really suits this game. The motor humming in Roombo is quite cute and helps to really show what a delightfully evil thing it really is, the LED screen on the face of the Roomba displays a lot of emotion which is both entertaining and integral to the gameplay.

My verdict on this game is simple and unfortunate, it is one of the more enjoyable Indie titles I have played in some time, but its barley lasts for two hours. I recommend it if it’s a sale ad hopefully in the future there will be more content, but at this stage; it feels like an expanded tech demo. In the future, I hope to see possibly a second story home, which has a creative way to change floors and hopefully just more variety. At this current stage, the game is awesome, however, so short that it hurts the quality, I just want more.

It’s a wonderful experience, but it’s a short one, the ridiculous nature of the concept is done well but there isn’t much of it. It is worth your time on sale and you won’t be disappointed by the game, only how much there is.