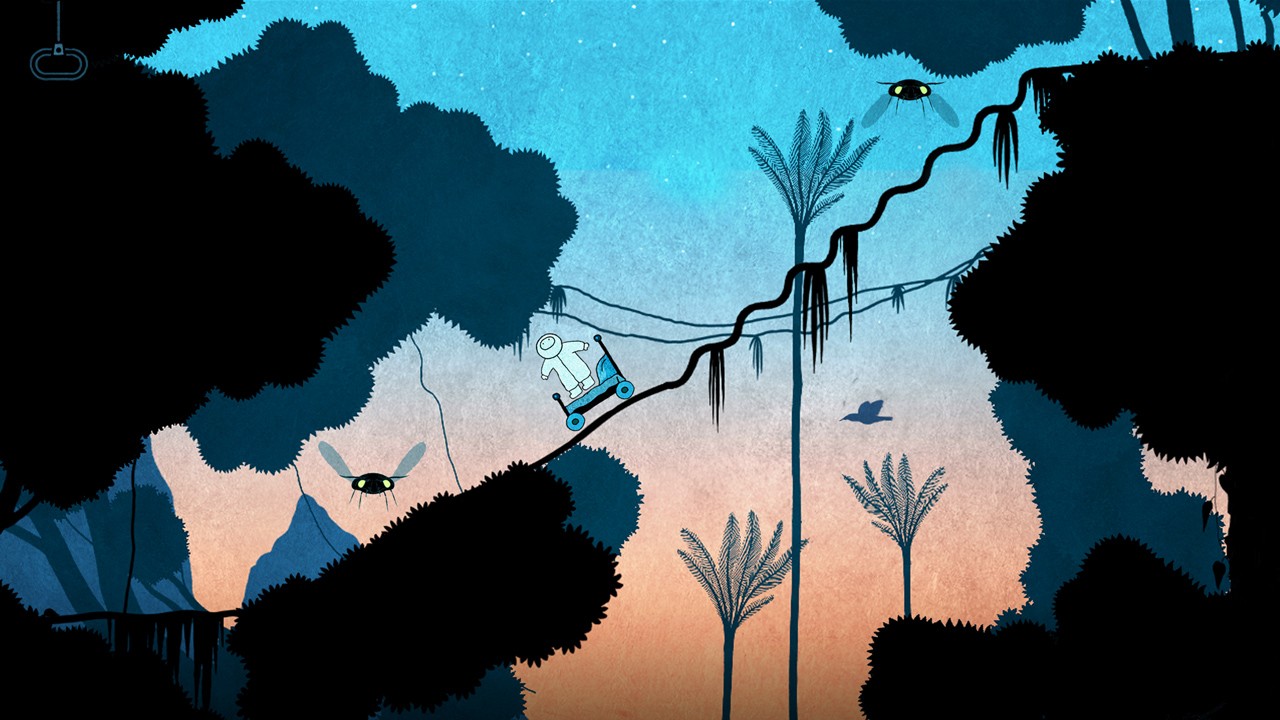 If I were to choose my favourite gaming genres, I don’t think platform games would be that high on the list. Perhaps in the days of old on the 16-bit machines, but when everything evolved to the 3D open-world type, the genre morphed into the broad adventure game. With the current surge in retro games, games like the side-scrolling beat ’em ups have reemerged as well as the classic 2D platformer. Yuri falls into the latter, though it has a little more ‘oomph’ than most. That’s the technical term.

Yuri’s swift introduction is as fluid as the gameplay. There aren’t any tutorials or drawn-out origin story as you’re thrown into the action immediately. On first impressions, the game was a little too quick for me and was like playing a Tony Hawk game on a Wipeout track. A familiar 2D construction, the action scrolls from left to right with the opening areas abundant with vegetation that moves with you, often with you gliding over branches while using your bed. You read that correctly, Yuri’s mode of transport is their bed, but one that manoeuvres with the ease of a pro skater; minus the heel kicks and ollies.

The premise is very dream-like. Going with the title character and, well… the title, I assumed that this was a play on the childhood dreams of the astronaut Yuri Gagarin where his imagination evolves into almost lucid actions. Then again, it could have just literally been a story of a kid skating on his bed while fast asleep. As there isn’t any linear story going on here, it leaves it open for your interpretation; therefore, I’m going with my viewpoint as it makes the story more engaging, to some level. 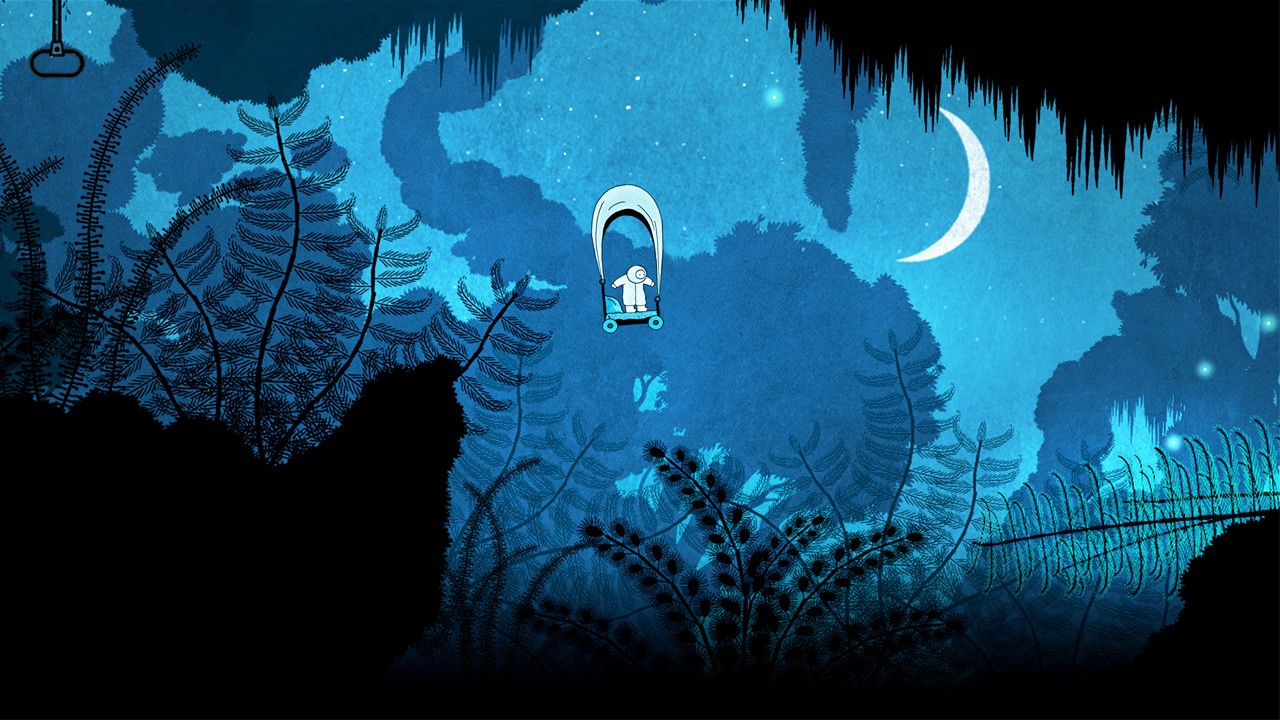 You’ll have to forgive me for swooning over the artwork, but I found it beautiful. It reminded me of a playable shadowbox that displays depth of field and textures that look like the backgrounds are made of paper and lit from behind. Each of the 17 levels has a clear definition between all the layers, and while Yuri only stays in the foreground, it does add a density to the playing environment. It’s all very well to look pretty and dream-like, but how does it play?

Earlier I mentioned that Yuri was very swift, I’d even say it was quite abrupt in that you would dash from left to right, only to outrun the scrolling of the screen and fall to your death. For a few minutes, I played like this, thinking the game was relying on lightning reactions and acutely aware that my patience was fading. Accidentally, I knocked the analogue stick to the left before a jump and thinking that I’d fall into another chasm, I rolled back. Foolishly I was going flat out from the outset, but you can slow down your speed and go back to the beginning of each level. Pending you can jump up any of the platforms. Once my pride came back, I was back to enjoying the visuals once more and dying less. That is until the later levels, where dying becomes a habit.

It’s an indie game, but already it detracts from the pixel art style and with the approach to deaths, it’s the simple ‘return to checkpoint’ model. Thank goodness for that, as if you had to go back to the beginning or worse, a perma-death setup, there’s no way I would have persevered with the game as I died a lot. Not in a souls-type manner, but enough that if given an allocation of lives, they’d be all gone. So, you can keep going with infinite continues, so to speak, but apart from getting through each stage, what else do you do, or what other encounters are there? Not much.

There are these floating blue orbs to collect on each stage, but other than a counter of how many you have, I didn’t see the point in obtaining them as there aren’t any shops to exchange them for new skills or perhaps a different attire to the Inuit-type garb you start with. The enemies or obstacles – however you wish to define them, are plentiful and they feel quite organic, smoothly blending in with the backgrounds and art style. Sometimes I forgot about them and would glide right into them, causing a halt to my rhythm. There isn’t any health to lose, and you won’t die as such, but there were a few areas where I needed to pick up speed to get across an area and one of these flying thingamajigs were obstructing my chances to get across, or worse, knocking me back to my death. 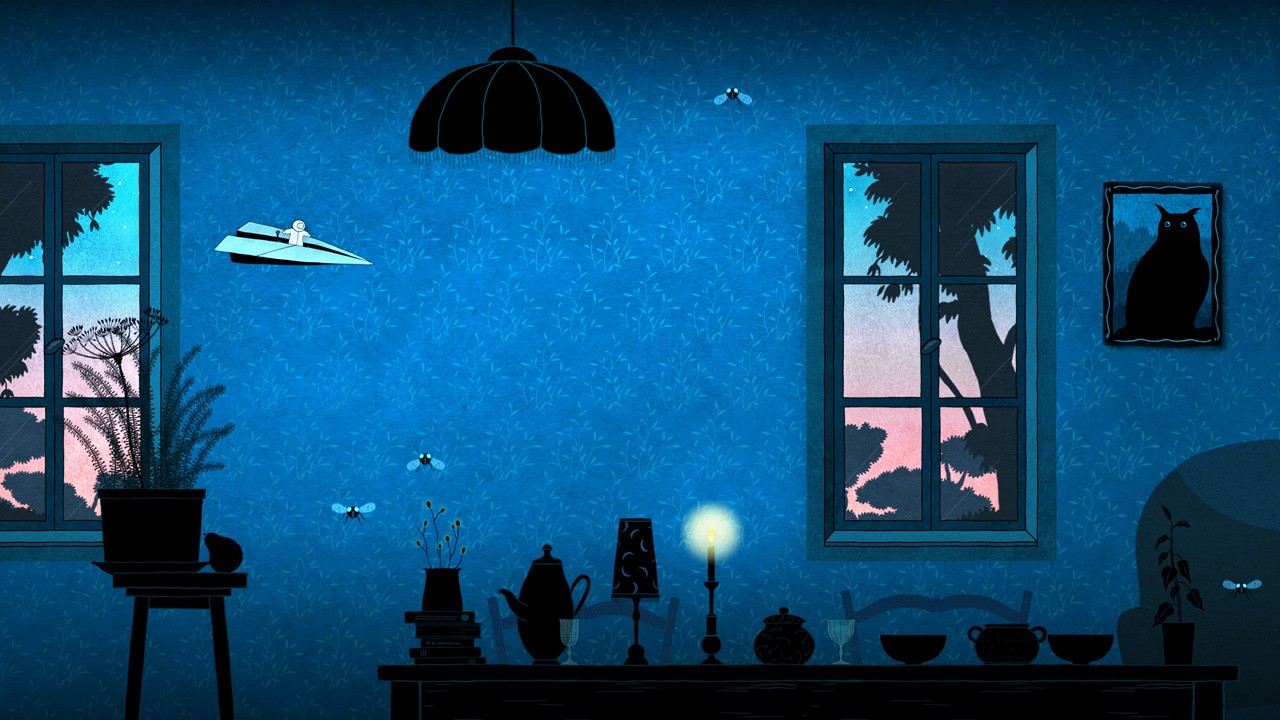 I’m always fond of a good soundtrack, even if it doesn’t affect the gameplay directly, but the music here is on par with the dream-like ambience. It doesn’t burst your ear-holes with distracting electronica, but equally doesn’t put you to sleep with a faint lullaby. That said, the score isn’t constant, but when it kicks in, is quite therapeutic. It almost neutralises the irritation of dying over and over again in a calming manner. Both the visuals and audio work in unison and creates a unique experience, but regrettably, the basic and sometimes frustrating gameplay don’t have the same connection and feels disjointed. Also, on a petty note, the voices that come from young Yuri sound a little like Mr Bean and don’t sound like a child due to the caveman-like grunts.

Each level in Yuri is pretty big and offers a decent challenge. It’s not the same old structure, so it’s far from repetitive, even if the controls are merely left, right and jump. As touched upon, there are checkpoints throughout, but they’re only evident once you die. Deaths are quick if you fall down a hole, but death by drowning is slow, and I do wonder why the animation drags out as you can’t jump once you land it water, therefore have to watch Yuri sink. After the 6th time in a row, because you missed a vine or a bug knocked you back into the water, it gets old quick, and you wish you could skip it. On the plus side, loading times are swift, and each level has a brief cutaway title, and then you’re back in action.

There was no doubt that I was going to be impressed with the presentation as this appealed to me from the trailer, but did I want to play another retro platform game? Not so much. I’m pleased that my reservation was wrong as I had a lot of fun with Yuri. It’s another pick-up and play title that doesn’t require any understanding of the story or the game mechanics as it’s intuitive. In fact, I’d say that you don’t need to master any particular technique other than patience. If you can cope with the frequent deaths and you’re not looking for something that’s mentally taxing, i.e. free of puzzles, then Yuri is a visual treat, and it’s surprisingly satisfying riding a bed as a skateboard.

Enter a dreamscape where you ride your bed as a skateboard, free of illogical puzzles but full of obstacles to manoeuvre. But will it keep you up at night or put you to sleep?