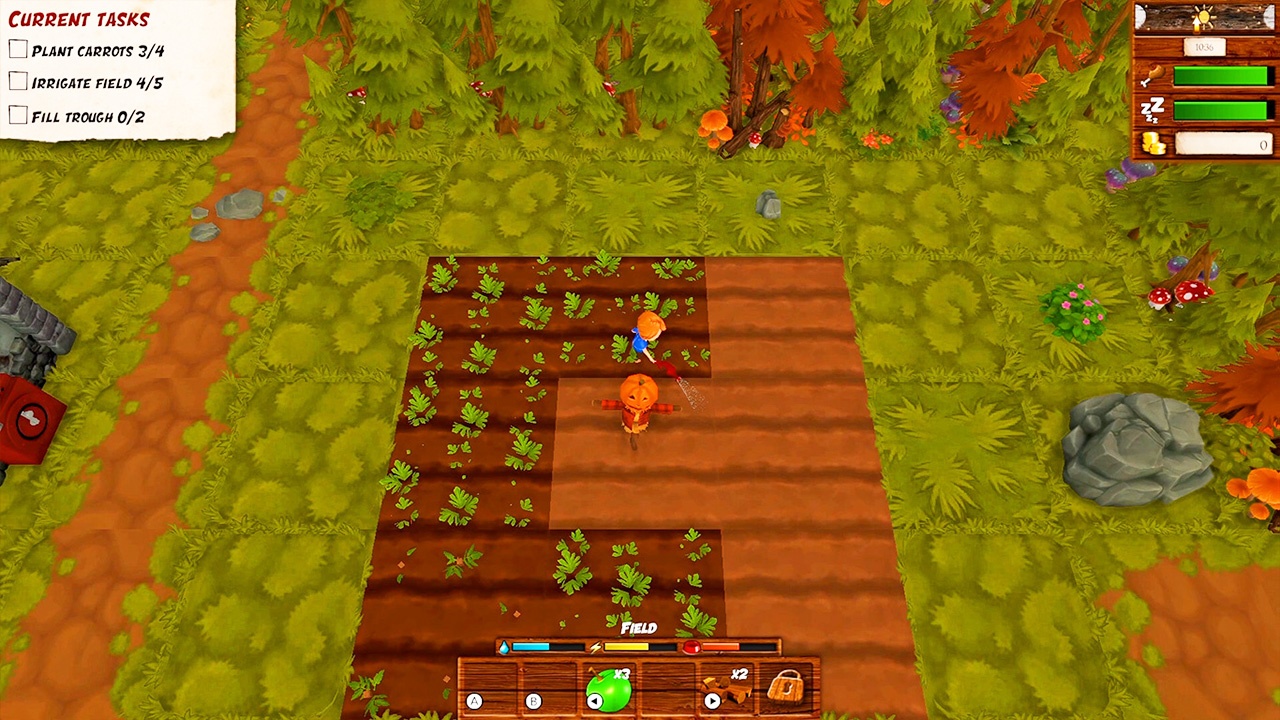 Okay first off, I’d like to say that simulation games are one of my favorite video game genres out there, from old games such as Thrillville and Game Developer Tycoon to newer titles like Animal Crossing, The Sims, and Stardew Valley. Going into a game such as Harvest Life, I can’t lie and say I wasn’t excited to play this game. However, that excitement was soon diminished. Within at least an hour into the game I was already homesick, missing the city life, that being other games I could have been playing. Although Harvest Life does have some redeeming qualities, is it enough to be a good game or just UDDER nonsense? Sorry about that, lets get into this review, shall we? Let’s get a MOOve on!

Harvest Life creates a base story line that would come from any basic simulation game. Your grandpa has an accident with a tree and gives the farm to you to take care of, and that’s it. With no questions asked you are just thrown into the game. Within 5 minutes into the game you get your first official “quest”, which is to get a cat stuck out of the tree by…cutting the tree down while the cat is still in it. Makes sense to me. Whether it was a small tutorial to show how to chop trees or not, having this cat is pointless as it does nothing except just being on your farm. That’s one of the main “quests” throughout the whole game. I mean you can talk to your grandpa to get additional assignments which are easy and simple to accomplish, but they are not rewarding or challenging enough to call them quests. So, when the game tells you your taking care of your grandpa’s farm, that’s literally your everlasting objective. 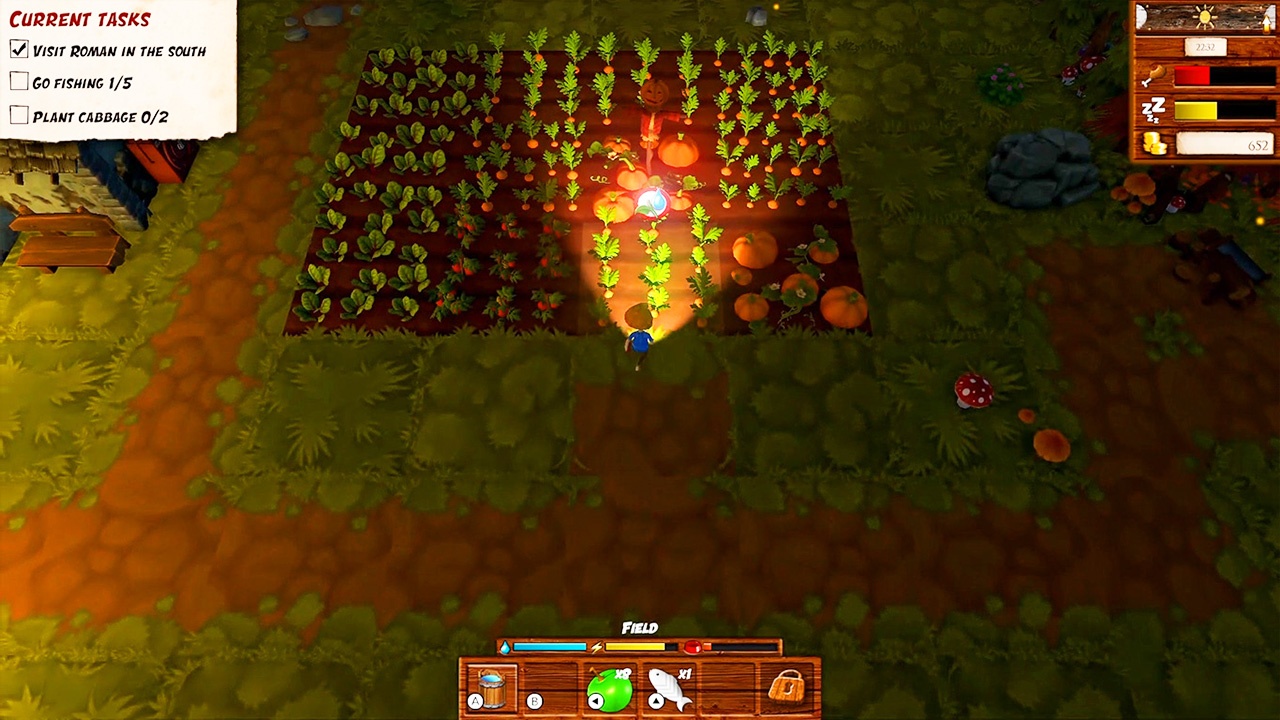 First things that need to be addressed is a missed opportunity on in-depth character customization. Now I need to say this aspect doesn’t affect the games score. There are games out there like Animal Crossing that doesn’t allow character customization, but still can be amazing product in the endgame. In my opinion, any game with a chance of character customization should strike while the iron is hot. Let’s talk about graphics in Harvest life. When I first booted up the game it honestly looked like I was playing a mobile game or a farm game off some website at best. It was just so off putting and a huge turnoff. Animals and Monsters, yes you heard me right I’ll touch on that a little later, look unfinished and looks just like little blobs. It just looks like the game isn’t finished and somebody decided to just release the game way before its initial release date. It sadly plays the same way as well. A beta version of the same product.

Some of the gameplay in Harvest Life is a tedious repetitive and buggy mess. Now I know the words tedious and repetitive aren’t the best choice of words when describing any simulation games, especially a farming one, but let me explain myself. Harvest Life has added to their game mechanics such as sleep and hunger for yourself the player, and fodder, water and electricity for your farm. The sleep and hunger meter are extremely unnecessary for a farming game. Any simple task such as chopping wood will constantly drain your sleep and hunger meter which takes more time out of your day. Hunger can be sustained by eating either apples, random berry bushes you stumble across and raw egg. 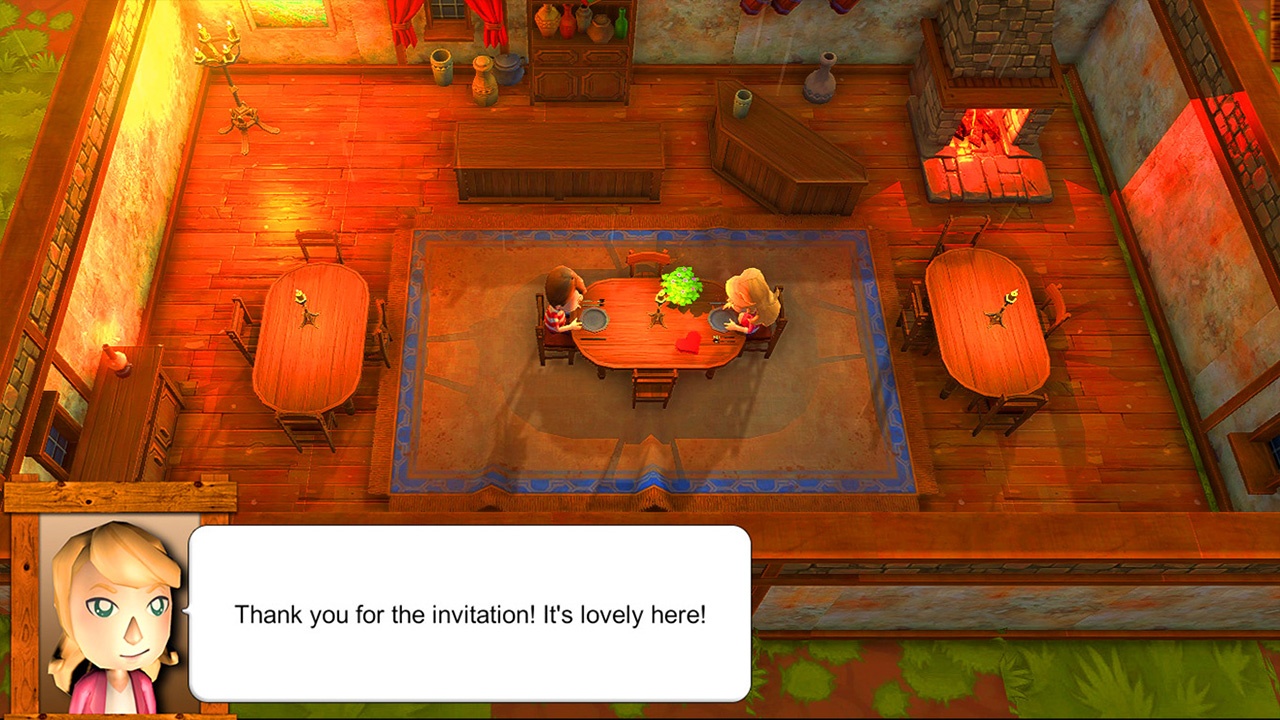 The game somewhat tells the player raw eggs are for when your desperate but when you eat them nothing happens. Since the game brought it up, I’m expecting my character to get sick or something, but nothing happens. The sleep meter is refilled by sleeping in your own bed. Same as hunger the meter falls without sleeping in your bed, there’s nothing you can do to treat it. Exploration isn’t really an option in this game because of the sleep meter holding you back. The worst part is if the hunger or sleep meter reaches zero you are instantly teleported back to your house and you lose a lot of your money. Its painful when you manage to earn at least 700 coins just to get knocked down to 200.  Chopping wood brings you to a literal knock off Fruit Ninja mini game where you just chop wood. This activity is what will constantly drain your hunger and sleep meter. Fishing is not bad, same as planting and harvesting crops. When I said this game was a buggy mess, I meant it. Everything in this game has a lack of animation which causes some characters and animals to have a messed-up walk cycle which causes them to get stuck.  To access the town, you must go through the woods which are filled with god awful animated wolves while your armed with your sword. Its best not to fight them, more will spawn and corner you plus your hunger and sleep will just deplete. Later you’ll come across some skeletons saying brains like a zombie but that’s all I’ll say about that mess.

Harvest Life’s one redeeming quality is couch coop multiplayer. Player 2 gets their own farm and its up to you two how you want to play the game. You can either help each or just be two lonely farmers together. Me and my brother usually found ourselves role playing and laughing playing the game together. At its current price on the Switch for $30 I couldn’t recommend this game at all, its so clunky and unpolished your better of playing Stardew Valley.

At its current price on the Switch for $30 I couldn’t recommend this game at all, its so clunky and unpolished your better of playing Stardew Valley.