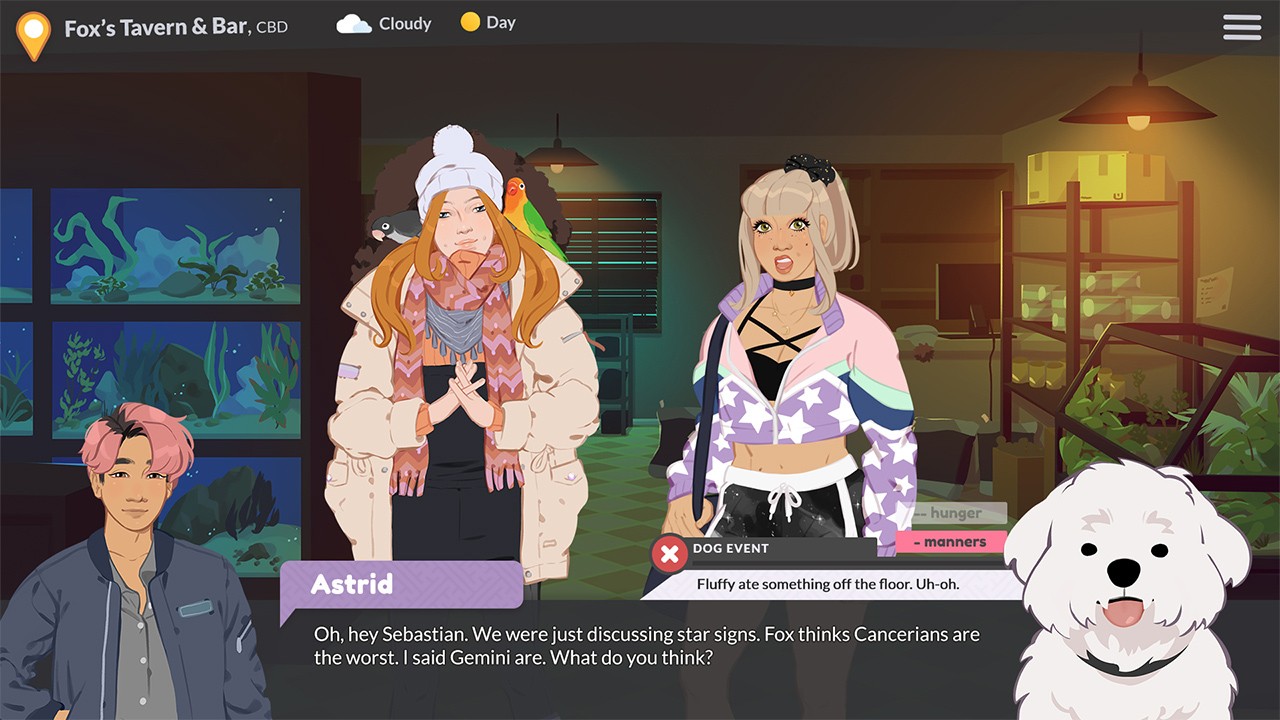 The introduction to Best Friend Forever follows a standard pattern typical of its genres. The player character moves to a new place and is soon engrossed in their local community. The gimmick with this title is the dog-based dating app. Seemingly everyone in Best Friend Forever is obsessed with their four-legged companions. Once adopting your dog, the game diverges into a visual-novel pet care hybrid. Through a series of choices, you can woo and win over the many people of Rainbow Bay. Like many visual novels of recent years, every interactable and dateable NPC seems to be a pansexual and you as the player are free to pick and choose whoever you would like to try to date. This fused with a dog-crazy community makes the setting idyllic, if not a bit cheesy. Once you’ve adopted your dog and bagged yourself a date – the game becomes very much a stat management simulator. 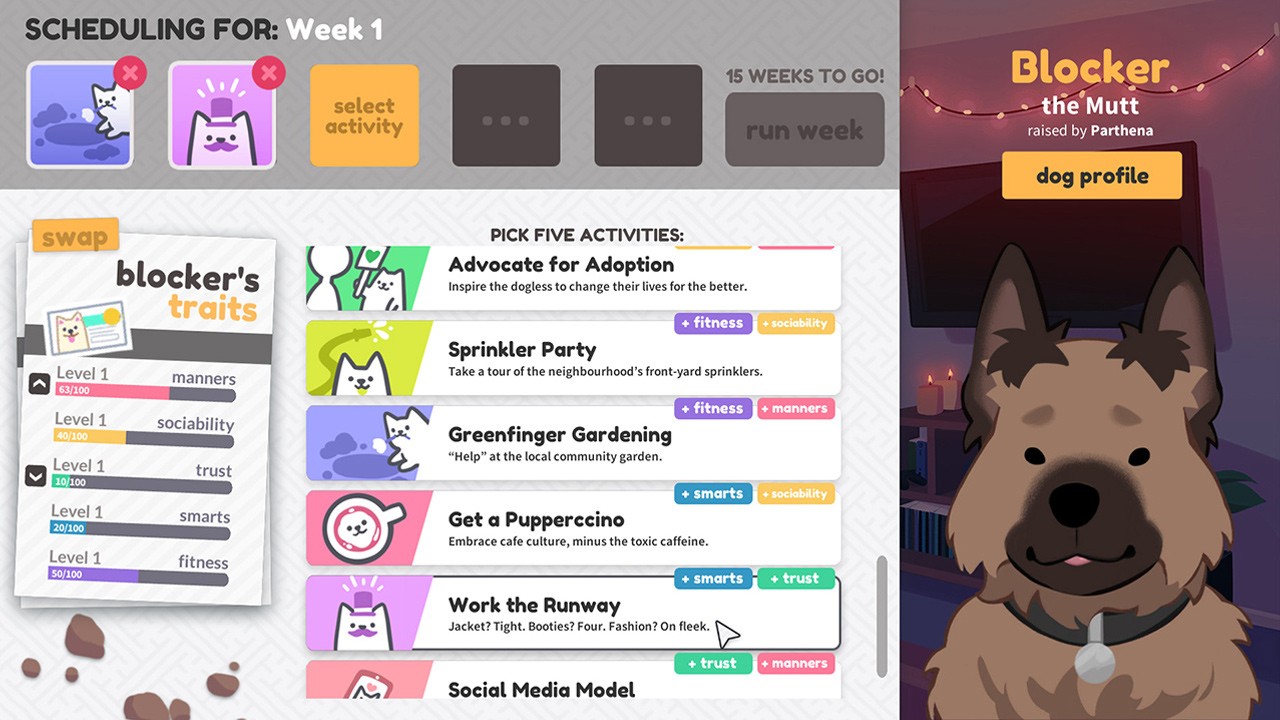 Through the series of stats including Manners, Smarts and Fitness – you can help your dog become the perfect pup. This along with keeping your pup fed and watered can feel a bit tedious when the dating parts of the game become particularly dull. Further, when trying to wade through text as visual novels like Best Friend Forever often demand, the chore of keeping your dog under control can make for sometimes frustrating gameplay – far from the relaxation that the aesthetic of the title seems to promise. This game puts in a lot of effort to try to do something very different with the fused genre and multiple focus, but it doesn’t always hit the mark. I became bored with the title after short play sessions, having to revisit the title every time with an open mind. It was hard to really get into in any sort of meaningful way. The writing was fairly good, although I would appreciate some distinction between voices as many of the characters seemed a bit too similar.

What I have to praise the developers at Starcott for however is their focus on diversity and inclusion. While these standards should be industry-wide, few studios do and Starcott have in making their game so accessible and welcoming for all. The website for the game advertises ‘experience(ing) modern love at its finest!’ and Best Friend Forever certainly allows this. You can choose from three-character appearances and date whichever characters you choose – even allowing for changing the pronouns in-game to the player’s preferred pronouns. Further, the NPC cast of this game are diverse in race, body size, appearance and sexual orientation isn’t a massive focus in the game. Getting to know this diverse group of characters – all well-designed and thoughtful in creation – was a joyful part of this gaming experience. The art-style, with its clean lines and gentle visual novel 2D focus, was one of the best parts of the game. 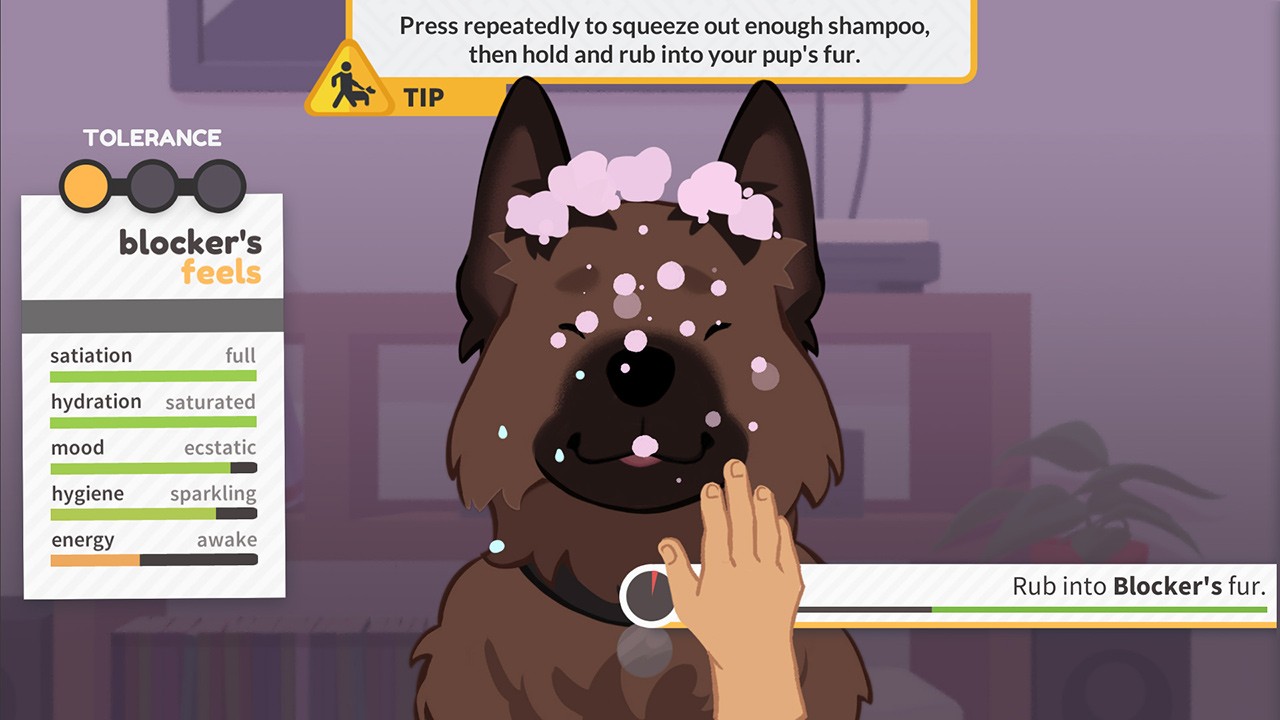 Visually, the game is hard to be critical of. I would have appreciated a more interactive pet-care experience and I feel like there could have been a wider amount of art to reflect different scenarios with your lil’ doggo, but that may come down to personal preference. The experience could have been enhanced with more additions like this, however, to make the gameplay more varied and the experience overall more fulfilling. The music was a bit bland and while certainly inoffensive, I think it would be hard with how different the game tries to be to match the tone that it is going for audibly. Possibly the part that lets this title down the most however is its inconsistent voice acting. While I will not criticise the quality of the voice actor’s performances, I felt its use was very inconsistent. When I heard it, it felt out of place and forced. Games like Best Friend Forever thrive on simplicity. I feel that while the best intentions were meant with the voice acting, it felt one step too far. If it was supposed to be a big part of the experience, it should have been all voice acted.

If you enjoyed games like Cinders and Later Daters, then the comical visual novel antics might be right up your alley. But whilst rather charming, Best Friend Forever fell flat for this visual novel lover. This game reminded me a bit of Nintendogs in its stat-management angle but did not quite have the focus that a game revolving around animal care needs to feel anything but tokenistic. This game doesn’t seem to have much replay value unless you want to date someone else in the cast or choose another dog. I just really didn’t enjoy the experience enough to give it a full second playthrough.

Best Friend Forever is a pretty visual novel that isn’t quite house trained yet. An underwhelming narrative and gameplay experience.