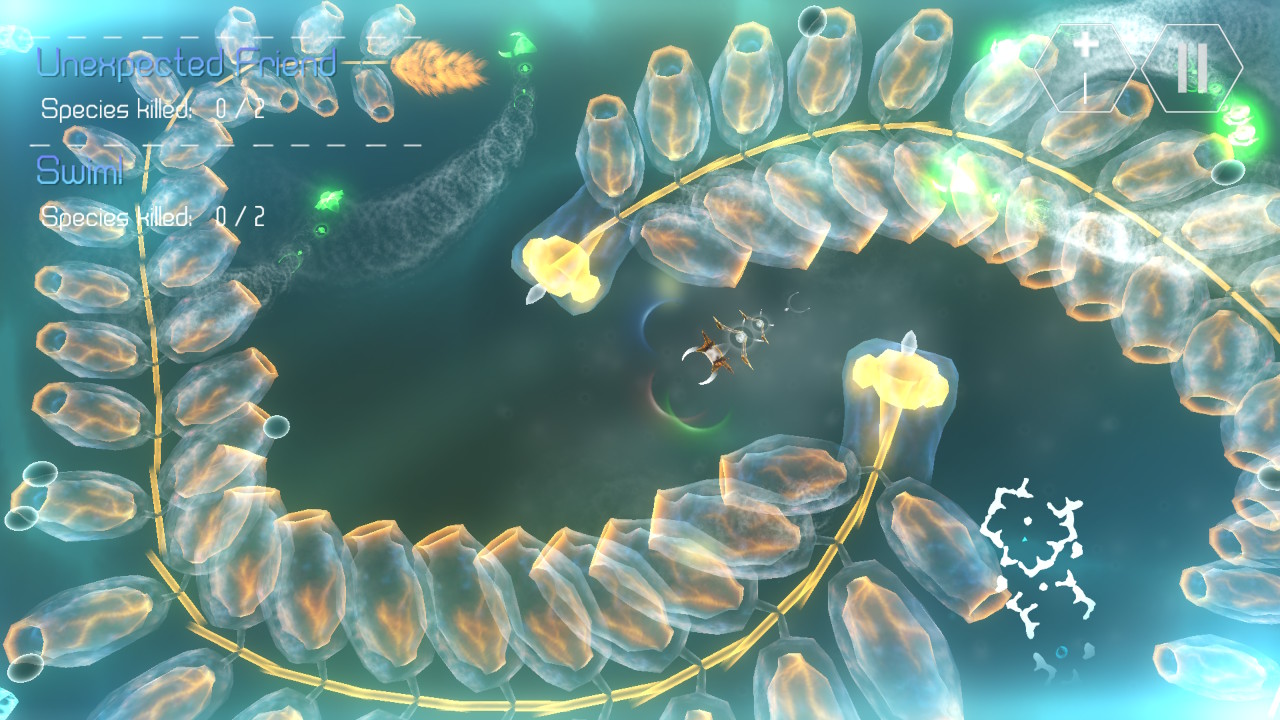 I had to do a little bit of mental digging to remember what my time with Sparkle 2 Evo was like. After all, not only was it months ago, but the game itself didn’t stand out on my radar nearly as much as the puzzle titles with the same name. A couple of glances reminded me of the surreal, relaxing experience of swimming around in primordial soup, trying to get bigger without a clear goal in mind. There were some good points, some bad, but, ultimately, it was a bit forgettable. I’m always baffled by games that don’t lack a cohesive direction, and that’s kind of what I was getting from Sparkle 2. So, for those who are still interested in the concept, if not the execution, I present to you Sparkle 3 Genesis.

Sparkle 3 Genesis is certainly a direct sequel without being a direct sequel, since, well, you can’t port over your evolved species to this third installment (of which only two appear on the Switch). Once again, you’re tasked with taking an organism and helping it grow in whatever direction you decide, bringing life and “purpose” to something that barely exists on a molecular level. Aided only by the occasional omniscient narrator, you decide the evolutionary path you want to follow, get bigger, and, eventually, become a fully formed being in the sense that you take up the entire goddamn screen with your girth. It’s a beautiful tale, and one that basically only ends when you’re kind of bored with the whole thing. 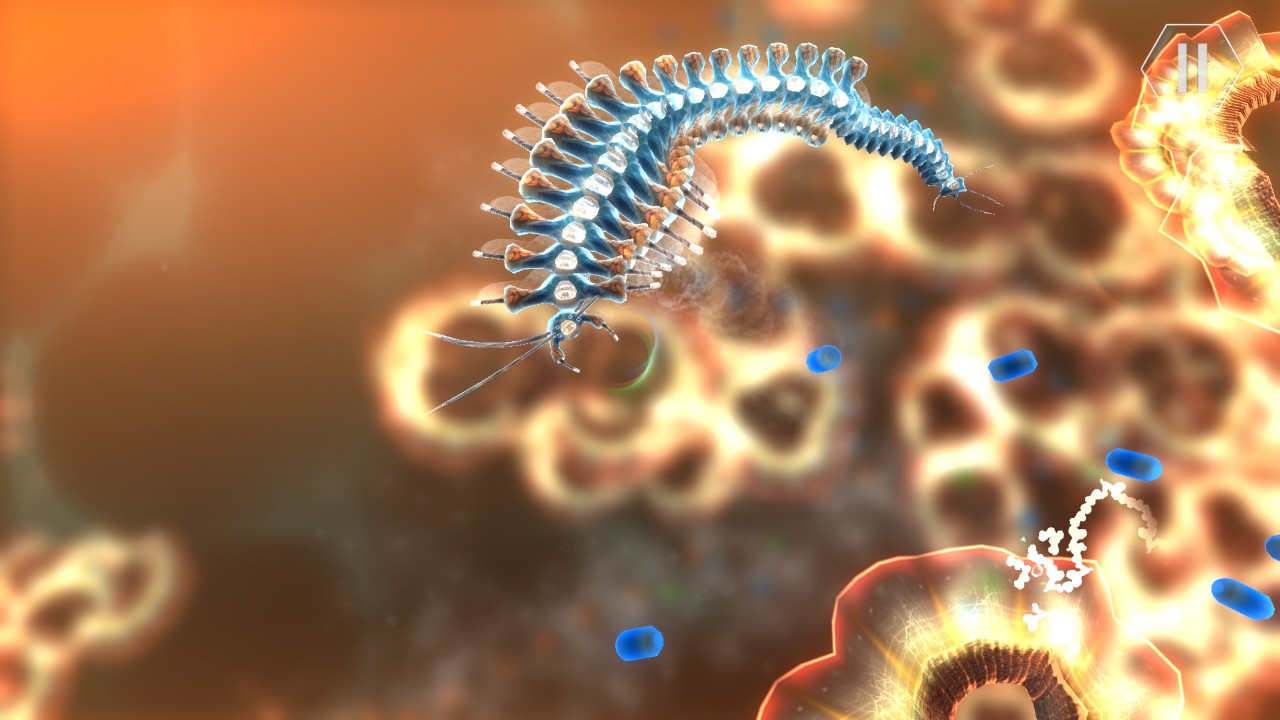 So, out the gate, there’s a LOT that Sparkle 3 does better than 2. First and foremost, it’s more restricted and direction oriented. Sparkle 2 left a lot up to the player to decide in terms of the when and where and how to go. Part of this was great for players looking to simply be adrift in time, but, for those of us who wanted some kind of reason to play, it was daunting. Sparkle 3 gives better focus in two important directions. Firstly, the quests. Sparkle 2 had a handful of questing, sure, but Sparkle 3 has very clear, very straightforward targets to achieve in every area. Instead of progressing when you’ve gotten big enough, Sparkle 3 has you do a couple of chores before jumping ahead to the next field. Secondly, you don’t just arbitrarily move between the layers of the world anymore. Part of Sparkle 2’s aimless feeling was the ability to simply swim up or down and be in a whole different area with no preamble. Sparkle 3 has specific vortexes where you can transition, and, usually, only in one direction. This feels more like gates that you’d discover in a game and less like “whatever, let’s go this way.”

The aforementioned quests also gave me a better sense of not only my own purpose, but also gave me a better idea of the kind of organism I wanted to evolve. If quests focused on attacking other things, I’d buff up my red. If it was all about consumption, then I should drop more points into my blue. Yes, the changes in your little Sparkle are now directed by you and not just from what you eat! Consume as much as you want, of any color, and use that to level up, then decide HOW you’d like to evolve.  It’s so much more game oriented now! I was constantly swimming in circles in Sparkle 2 because I didn’t want to accidentally consume too many of the wrong color and then lose my ability and general tone. You dictate if you want to keep the rush ability, the immunity or the siphon, and this really helps guide the game in the direction you want to go.

However, Sparkle 3 Genesis is far from perfect. For one, no matter how much you evolve, however big you get, there’s always something that inherently feels lethargic about the gameplay. I was constantly mashing the rush button to swim faster because, even with every point dumped into red (for attack and speed), I felt like I was in peanut butter instead of water. This is only further proven when it came time to actually eat and consume the nutrients around me. Maybe it’s more accurate to how real organisms consume materials, but there was such a delay between eating something and then getting to eat another. Unfortunately, when that’s 85% of the gameplay, you notice when it takes far, far too long to do. 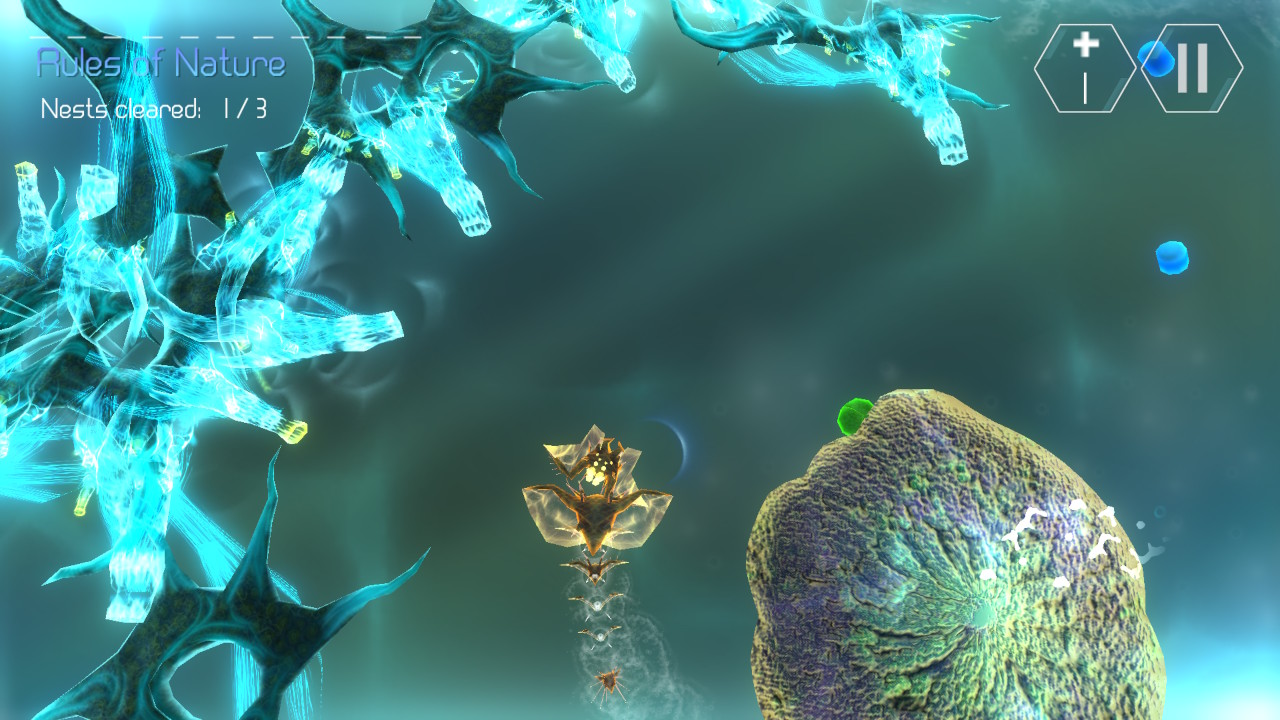 Another facet is that the quests of Sparkle 3 Genesis give you a purpose that maybe you’re not totally cool with. The Narrator feels like kind of a vengeful God most of the time, directing you to do stuff to basically punish other species he doesn’t like and doesn’t want to kill himself. The effect, therefore, makes you feel like an especially shitty messenger boy at times, but it’s not all bad. After all, I’m getting bigger and stronger all the time, I’d probably want to consume and destroy the others anyways. Survival and all that jazz.

But, in terms of improvement overall and having a better execution of form, Sparkle 3 Genesis is a great leap forward from its predecessor. It’s dropped a lot of the “casual” speak and let players actually have drive, which is important for a game. Maybe some people won’t dig that new vibe, and that’s more than ok: Sparkle 2 Evo is still a solid play and definitely more freeform. However, if you want something that’s a little more Spore and a little less Minecraft, then Sparkle 3 Genesis is a pretty great upgrade.