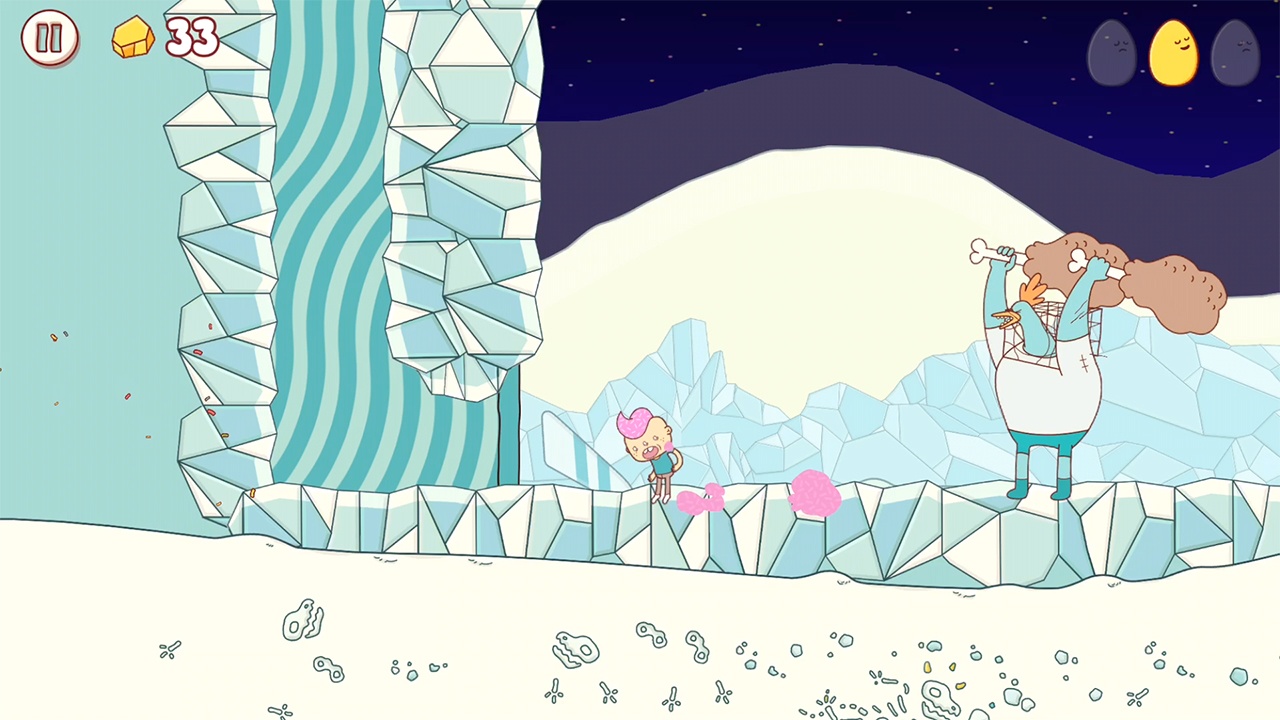 There was a part of me that knew, from the very beginning, that I would regret reviewing Eggggg – The Platform Puker. It’s not that it looked like a bad game; more often than not, games that seem mundane or strange end up being surprisingly good, and, since the bar was so low, I end up rating them much higher than I originally conceived. Nor is it specifically that it mentions vomit in the title of the game, so I knew how gross it could and would be. Hell, Boogerman is one of my favorites from the 16 bit era, and you can’t get grosser than that. No, it’s the fact that this game has already existed on mobile long, long before a console and PC release, and those are generally not the best quality titles to end up on the Switch. Still, I held my breath and jumped in, and got pretty much what I expected: disappointed, but in a different way.

There’s almost no plot to Eggggg, at least from what I can tell. A boy really wants to go outside and play, his mother says no, so he jumps out the window of his bedroom and lands inside a massive egg. Either because the egg is so gross or he’s terrified of the giant chicken that starts chasing him (it’s not clear) the boy starts vomiting almost nonstop. It’s his entire shtick, and it’s what he’ll do for the duration of the 36 levels that Hyper Games felt needed to make this game justified.

Technically speaking, there are only two controls for the game, as running comes automatically once the level starts. You jump left or jump right, so the buttons are easily ported to the shoulder bumpers, and you can also do touch screen controls if you’ve played before on your phone and wanted to continue the joy ride. You can change directions in midair, pivot on a dime, and do wall jumps, hanging jumps and several kind of bounces off enemies and objects as a result. Oh, and, as you jump, you puke. You puke a lot. A very early situation involves you being in a pit and needing to vomit until you’ve filled the pit and can swim out. And that’s far from the only time that it happens. To the game’s credit, the vomit is used somewhat creatively to justify the existence in the game, and it does add to the “humor” of the overall experience. 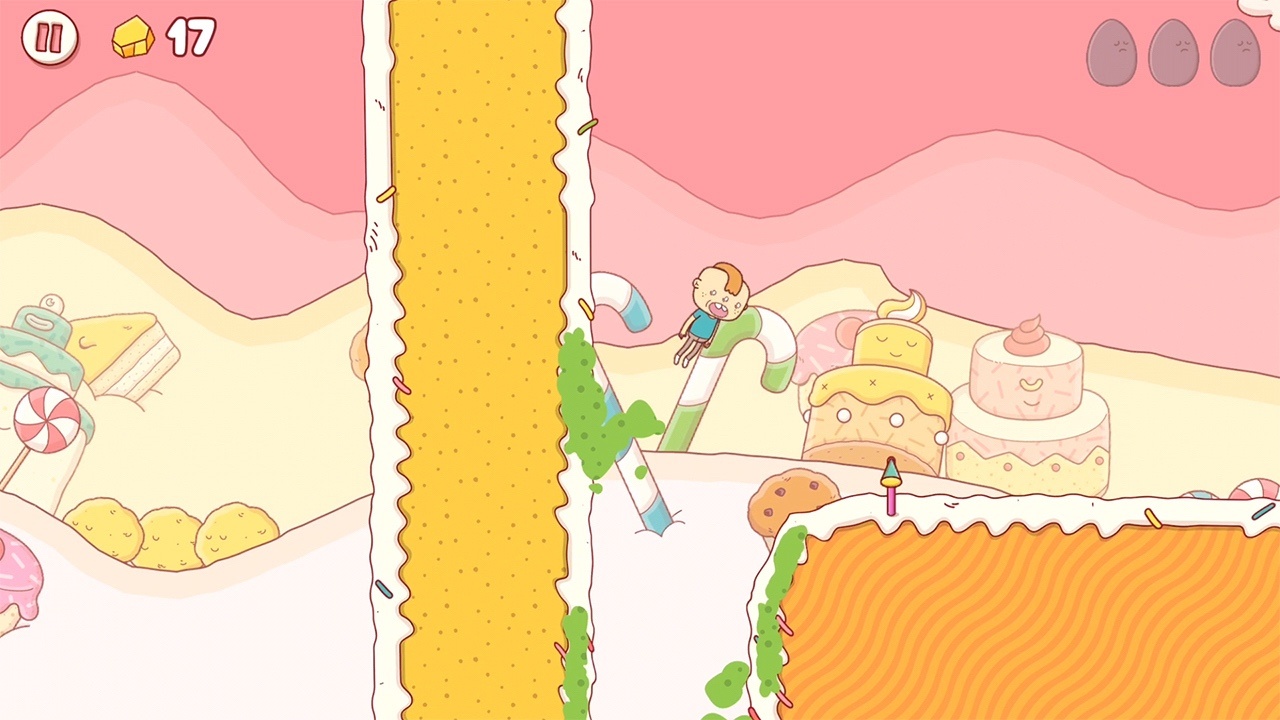 I use humor in quotations for Eggggg – The Platform Puker because anything being funny or not funny is entirely subjective. It’s easy for me to see that this style of humor isn’t for me, but there are elements and moments that do define the right kind of audience. For example, most of the platforms and ledges in the worlds have faces on them, and they all change expression pretty dramatically once our queasy lad pukes on them. There are even some platforms that scream in rage (appropriate, I feel) and grow in size, making the mechanics of the game work and present in both a functional and fun way. Several things have visible bums, and bums can be funny, especially if they’re the only weak point on an early boss you have to fight. When the boy falls off a cliff or gets caught by a buzzsaw, he turns green and explodes into a screen-covering splatter of puke. I understand who this game is made for, the gamer who enjoys cheap, gross humor and simple controls. It’s not a problem there. It’s certainly not my cup of tea, but I remember laughing at Toll Booth Willie as a child, so gross and blue humor will always have a spot. 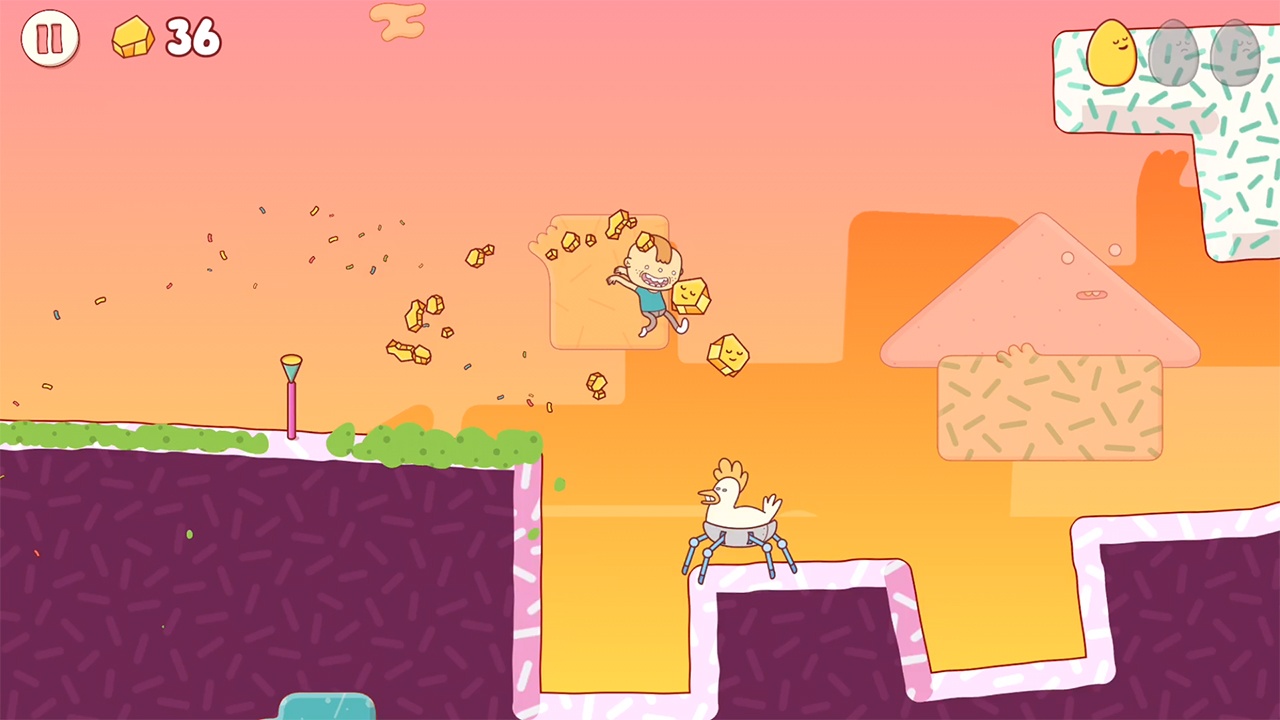 My problem, my very large problem with Eggggg, is that it does the stick and carrot incentive completely wrong. This sort of timed platformer asks you to do the levels in your fastest time. Fair enough,, and it even makes sense given the endless running and parkour type of gameplay that is exhibited throughout. Naturally, with games like this, there are also collectibles. There are floating bits of cheese, as well as three golden eggs that should be collected each level. Wait, not should: needed. You need to get them. If you fail to get at least fifty pieces of cheese and three golden eggs each stage, you are then penalized for not getting all the shinies. Hold the hell up. That’s the polar opposite of how to make this sort of game work, at least from my perspective. You should get players to run their hearts out and make the best time that you can, and then also offer some fun extra for getting all the pickups, like artwork or even silly little hats to wear on the levels. Instead, if I fail to waste my time by doubling back to get an egg that wasn’t even visible on the screen unless I fell somewhere perilous, I get docked a whopping 30 seconds. To put that into perspective, the average stage is less than two minutes, with a handful reaching all the way to four when you get much further on. That means your timing gets docked by potentially a full quarter of your run because you didn’t waste time looking for an egg.

This simply smacks of positively lazy and uncaring design on the developers part, especially when it comes to porting to a console. With a mobile game, you need to make players want to keep coming back between doing actual work, and that almost makes sense with Eggggg: nothing worse than having a lower time than your friends at the water cooler because you missed two pieces of cheese. But playing by yourself, on your Switch, and then being shamed for not grinding out the perfect game is an exceptionally shitty move. If I should harsh, it’s because I am, and I’m not sorry for that. Ten dollars is a lot to put into a game, and fighting for visibility on the Switch is a hard battle for even big developers. If you bring nothing to the table that people want to eat, don’t be surprised that your dish remains untouched. Only grab Eggggg if you’re positively hard up for simple platforming and you have a pile of eShop credit that you’re threatening to set on fire.

A goofy and gross platformer is totally marred in my eyes by backwards incentives and zero replay value.