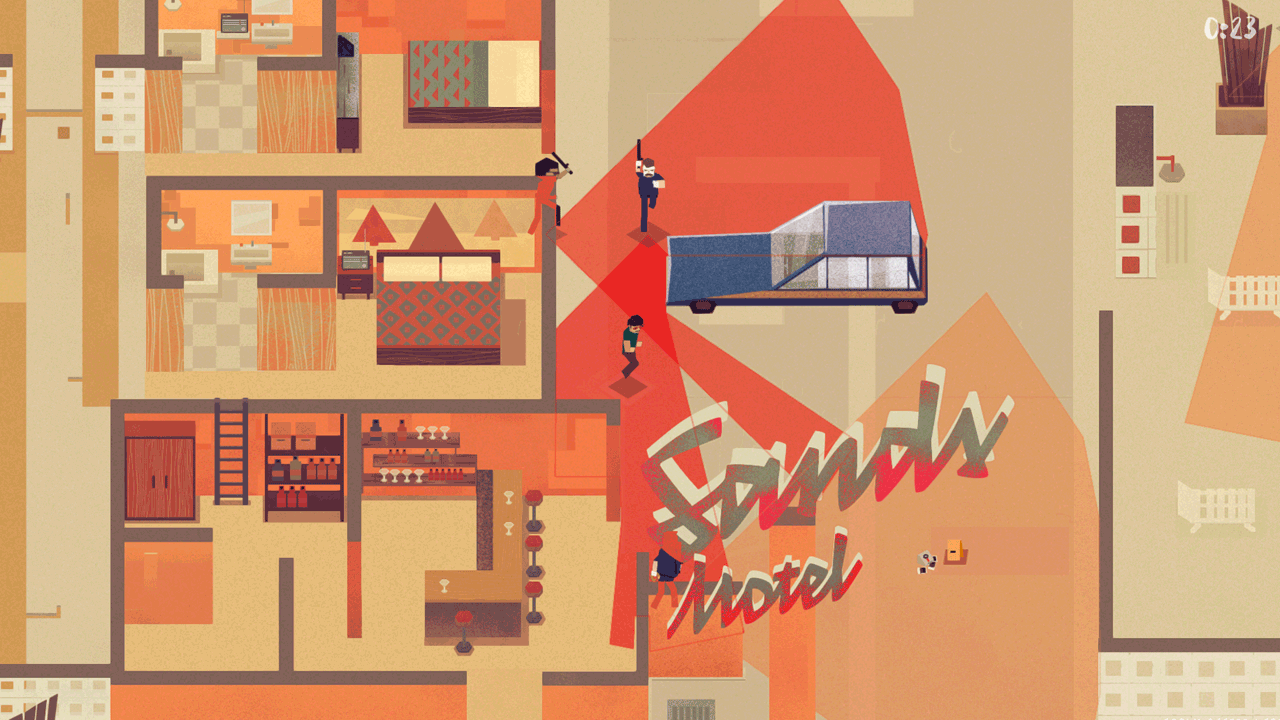 Well, that was unexpected.

iFun4All hasn’t made the best impression on the Switch so far. Their past two games, Green Game: Timeswapper and Red Game Without a Great Name have been middling at best. Mobile-only play, touchscreen controls, no story and no reason to replay…it was feeling a bit shovelware, to be quite honest. But I do appreciate any company that’s dead set on bringing their catalog onto the Switch, and the success of the two games proves that there’s something for everyone. So, firing up Serial Cleaner, I expected another quick and dirty game that would be amusing but not really fantastic. Instead, I had a TON of fun.

Serial Cleaner is the story of a man in the 70s when serial killers were at an all time high in the United States, but, for better or worse, he’s not one of them. Instead, his job is to head to various crime scenes after “incidents” and make all evidence – including the bodies – disappear. What’s really interesting is the police officers are super on top of the crimes and appear at the scenes almost immediately, putting down evidence markers and generally keeping the peace until the body bag unit arrives. So, Mr. Cleaner, you need to get rid of the incriminating items as quickly and quietly as possible while also dodging the finest police force that the 1970s has to offer. Oh, and you also need to make it home in time to watch the fight with your mom, because you live at home, you’re a good boy and you keep your mom company.

Serial Cleaner plays out like a giant, living puzzle game that only asks a few things out of you: do your job, do it right and do it quietly. You cannot and will not leave a crime scene until you’ve gotten all the hard evidence, disposed of the bodies and cleaned up a certain amount of blood. I guess the blood thing is the only one I was a bit fuzzy on, because you never have to clean up “all” the blood. You just have to get a certain amount of it. Then again, this is the 70s, I’m sure that being able to analyze for DNA and such wasn’t as precise an art as it is today. In any case, you literally clean up the blood with a vacuum, which is both comical and insane. I mean, it makes a ton of noise, I can’t imagine it works well on hard surfaces, but it is more practical than the time-consuming efforts of a mop and bucket. Also, this is a video game and using a Hoover to clean up blood is A-OK. 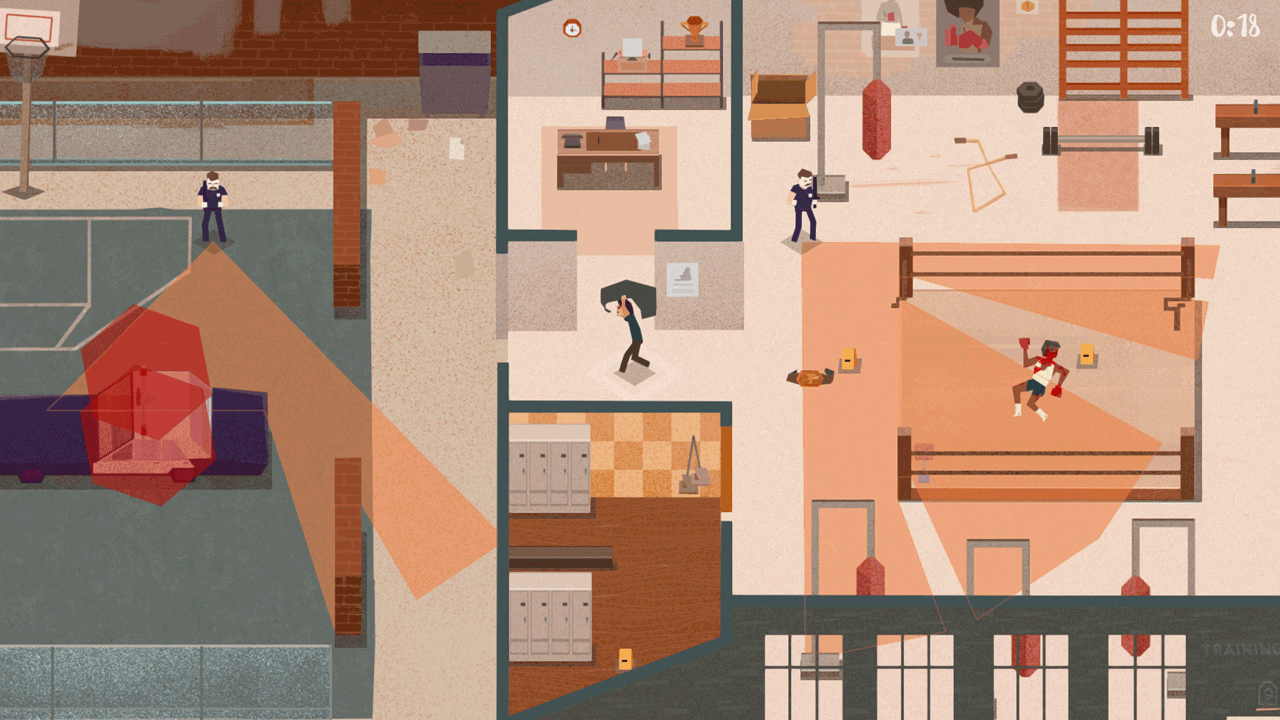 The police force you need to deal with swings wildly on a pendulum between “eagle eyed” and “crushingly dumb.” On the one hand, they are faster than you (cops gotta be in shape!), they do notice when the evidence is missing and they also can hear you walking or vacuuming on the other side of the wall. But, on the other hand, they’re basically part T-Rex because you moving in their line of sight is the entire criteria they need to catch you, and also how you elude them.I’ve had cops chase me into rooms with no escape, and I hide in the corner and wait, and, magically, I’m less than a foot away from their line of vision but I must just be the wind. Also, if you jump into one of the “hiding” spots – a cardboard box, an armoire, a pile of drums – you’re gone. Doesn’t matter if you do it in front of them while chasing you, you’ve disappeared. Once you get cocky, you can entertain yourself by getting up to three cops all chasing you, disappearing into a cabin in front of them, and watching them all try to figure out if you’re a ghost or swamp gas and where did you go.

But that level of AI stupidity doesn’t make Serial Cleaner easy. The evidence and bodies you need to collect are randomly scattered throughout the scenarios each time, so memorization isn’t your friend. The police sometimes move in patterns but they can also change erratically and really keep you on your toes. Hiding places aren’t everywhere, and sometimes a body is at the end of a particularly long and unforgiving stretch of hallway where you will definitely be caught if you don’t plan it right. There’s a mission with getting a body off a boat that’s particularly tricky because, even though no one else is on the boat, you gotta make the long trek back to your car through crates that don’t have flexibility on where to go. You gotta use your “cleaner sense” to see where the cops are on the map and time it just right, because, hint, you move slower when you’re carrying a body. 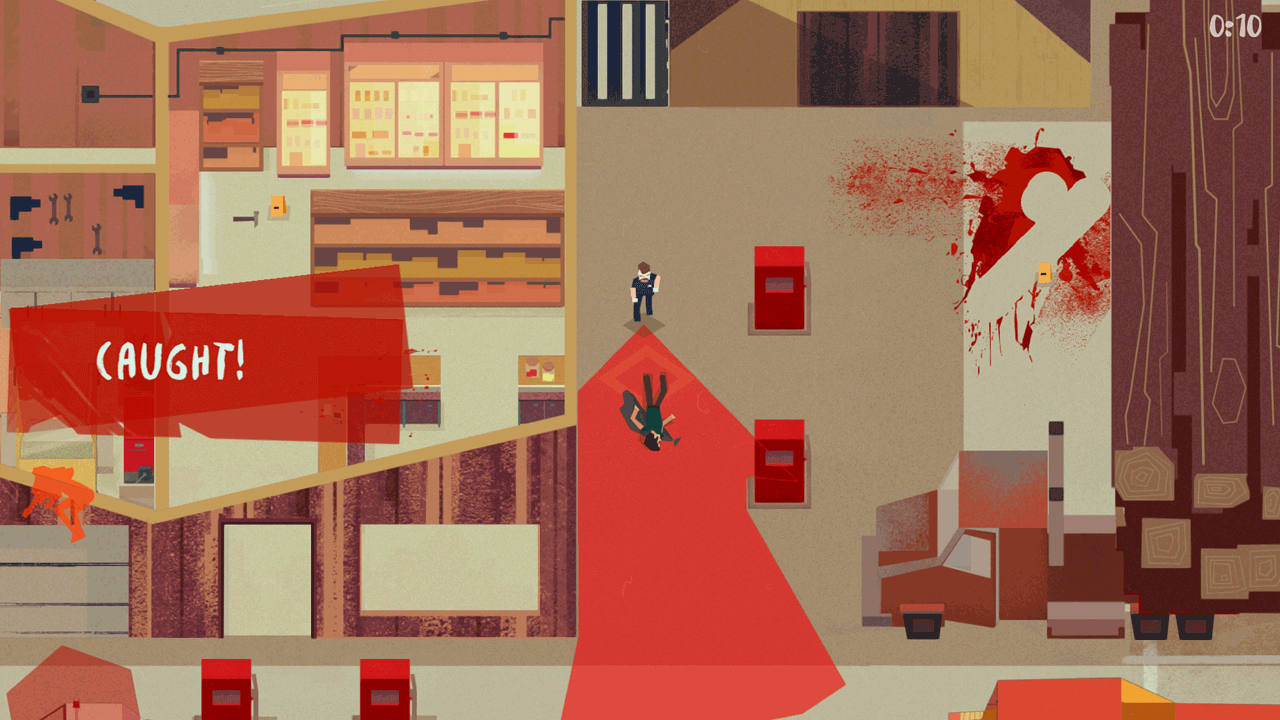 Atmospherically, Serial Cleaner really delivers on the little details of it all. It’s got this funky, cool groove with everything from the background music to the clothing and home designs. I love the fact that the Cleaner goes home and chats to his mom, enjoys meatloaf and doesn’t necessarily bring his work home with him. Things do eventually get more serious, as the Cleaner begins to wonder a bit about why he has so much work and, in a weird way, he becomes a bit of a hero towards the end. It’s actual, serious character development that doesn’t rely on needing to tell you everything about the dude: only that he does work, and, in his own mind, he knows the difference between right and wrong, even though that may be skewed. The last couple of missions are a far cry from the originals, and require you to really stay on your toes and think outside the box in order to complete the contract.

Lastly, be sure to explore the missions a bit in order to get the most out of everything. There are collectibles scattered throughout the game, unlocking both different costumes for the Cleaner as well as special “movie inspired” missions that are just amazing homages. Besides very mainstream cases of murder (cleaning up the Cantina in Star Wars, for instance) I especially love the deeper cinema cuts, and the level dedicated to Suspiria just made my entire day. These missions are especially difficult due to their scope and size, so don’t be discouraged if you can’t get all the bodies out of Ripley’s spaceship the first time through. Just enjoy the hell out of them.

Serial Cleaner is a delight to play and some of the best grizzly puzzling that I’ve dealt with in a long time. It’s like if Party Hard had an after show that was just as complex but less bloody. Even though it’s a bit on the short side (about four hours without the bonus hunts), it’s worth every second and should be top on Switch owner’s indie lists. If you’ve never picked it up before, and have any interest in the darker side of humor and puzzles, then get ready for a phone call: it’s your next client, and there’s been a hell of a mess.