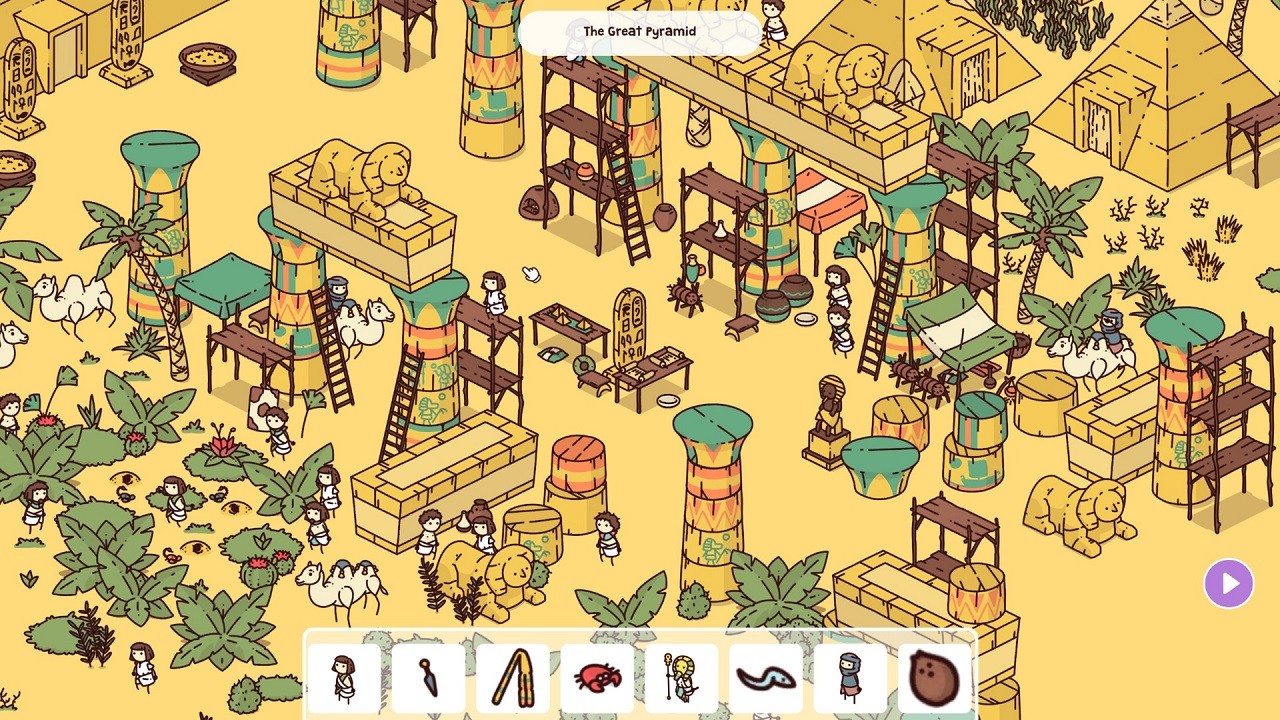 Since 1987, we’ve all been looking for Wally or Waldo within the Where’s Wally? or Where’s Waldo? series of books. Their simple premise of looking for a variety of objects, fiendishly hidden within packed scenarios, provide a nice distraction from everyday life and have been a proven success around the globe. It’s a style of entertainment that also works well in a digital format and there’s no better example of this, than within Crazy Monkey Studio’s Hidden Through Time; a hidden object game that takes us through the ages, and takes ages to get through, as it hides itself amongst a release onto the Nintendo Switch.

The game contains a couple of play modes, all of which I’ll cover throughout this review, but first and foremost, the main core of the game runs through a campaign, or story mode. Beginning with the Stone Age and taking us through a number of eras that span the Egyptian rules and Middle Ages, each era contains a number of levels which require an eye for detail as you seek out a variety of hidden objects within the landscapes. Each of the scenarios increase with difficulty as you progress through the times, with larger maps to search through and more elusive objects to find.

Within the hand-drawn and animated scenery of each level, giving a very “Where’s Wally/Waldo?” feel to the aesthetics, a series of objects lay hidden that need to be found. In order to help you ascertain what needs to be found, a grid runs along the bottom of the screen; each square denoting the object that needs to be found. However, to provide a source of clue, each picture or object also comes with a textual description that provides a small hint as to the area where you might find the specific object. To be honest though, these are only subtle hints and still require a great deal of exploration to find whatever it is that needs to be found. 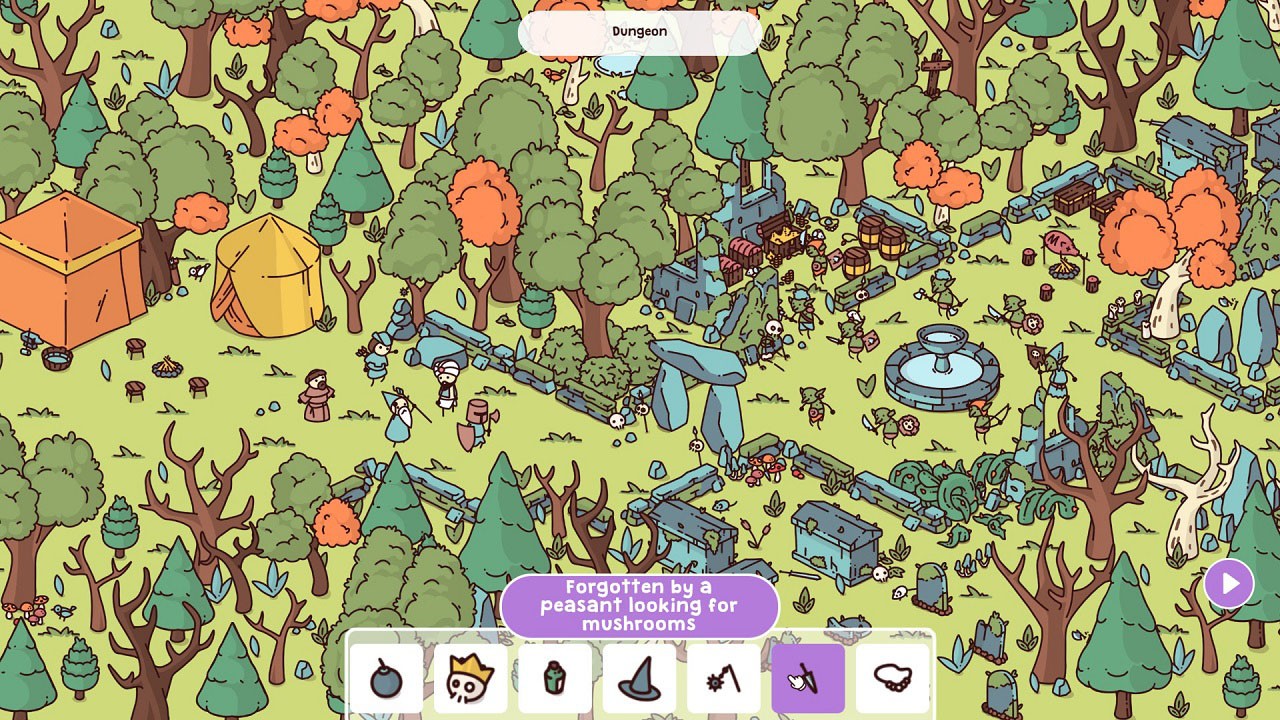 In terms of providing a legitimate source of entertainment, the game does a fantastic job at keeping you invested within each of its levels. Some objects are easily spotted, whilst others are so fiendish, that you can spend literally ten or twenty minutes searching, making it all the more rewarding when you do find it. Once all of the objects have been found within the level, you then progress to the next, larger and more animated map; thus making your next task significantly more difficult than the one that preceded it. It’s never a frustrating experience though and the game auto saves after every found object, meaning that you can drop-in and drop-out whenever you like with no penalty.

The journey through the eras of history also provide a nice variety of busy backdrops to investigate; many of which also contain some form of interaction to get involved in. In fact, some of these interactions become vital, as some objects can be hidden within tents, or need to be carved out of stone blocks. It all helps to add an extra layer to the basic core of gameplay, as you need to think outside of the box at times in order to find that elusive object that kept you at bay for the last thirty minutes or so. The way that some of the objects blend in with the background is cleverly done here and the subtle clues make a lot of sense when you figure them out, producing a really engaging, but casual affair that can be played at anytime and for any length of time.

To provide a bonafide source of longevity, Hidden Through Time also boasts a couple of features and game modes that allows you to edit and create your own levels, as well as upload your creations and download others to provide a near infinite amount of maps and puzzles to be solved. Even in a pre-release state, this feature held many fan and developer made maps; some of which are very cleverly done and add further to the overall content of the game. A neat editing feature allows you to create any number of maps with relative ease. Everything is laid out in an easy to understand and implement fashion; making level creation and editing an absolute breeze to work through and figure out. 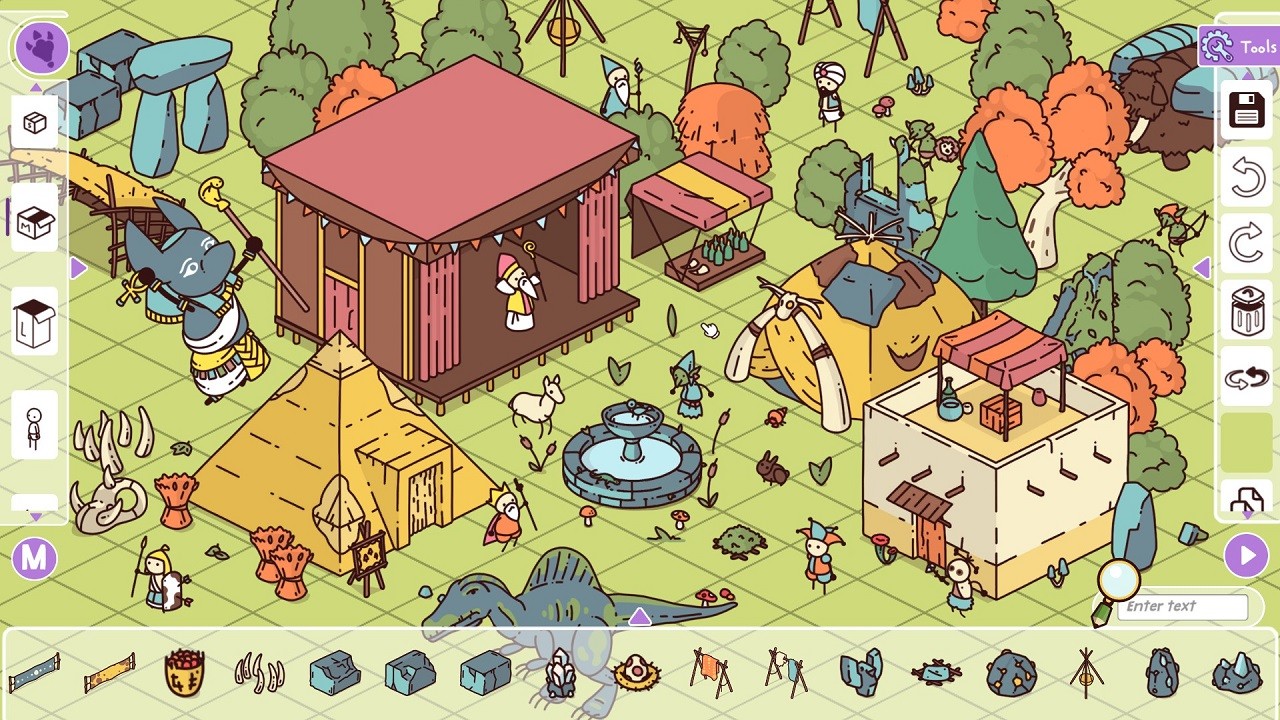 It’s been designed in such a way, that the results you can produce are simply staggering. Uploads and downloads can also be rated amongst the community, making it very clear in picking out fan favourites and levels that provide a good source of entertainment and challenge. It’s in this premise that the game really stands out, making this a very family-friendly game that both kids and adults will love playing. As a lone experience within the Switch’s handheld capacity, this game provides a good source of entertainment. However, dock the Switch onto the big screen and the whole family can join in the search for the hidden objects; something that my children thoroughly enjoyed doing and produced squeals of delight when they spotted that tiny snail, egg or rock that seemed impossible to find.

As far as gameplay goes, the game runs super smoothly with minimum waits between loading levels and a good level of accuracy when picking out objects. But then, that’s the least I would expect from a game that isn’t really pushing the boundaries of the Switch’s architecture. However, with that in mind, it’s a bit disappointing that touch-screen control hasn’t been implemented here. Although, it can also be argued that fingers are far too clumsy to pick out the intricacies of its style. The music too, can be a little overbearing, but in all honesty, I much prefer to play a game like this on mute anyway, so that’s no real hardship.

Overall, Hidden Through Time offers a nice change of pace and style amongst the many titles that are on offer within the Switch’s library. It builds upon the successful formula of Where’s Wally/Waldo? and adds a number of further elements that can only be done within a digital format, such as picture animations, interactions and the ability to create your own levels and produce a community that can play each others creations. In terms of this, its long-term appeal is near endless with its creative qualities. Even as a solo experience though, Hidden Through Time provides a wealth of levels that provide some nice backdrops through the eras of time and a whole host of objects to find. If you look carefully, you’ll find a solid game here that will appeal to all ages, from the Stone Age through to the Middle Ages and up to the modern day; even more so if, like me, you’ve been searching for Wally or Waldo over the last thirty years or so.

You won’t find Wally or Waldo here, but what you will find is Hidden Through Time to produce a compelling and satisfying hidden object game.