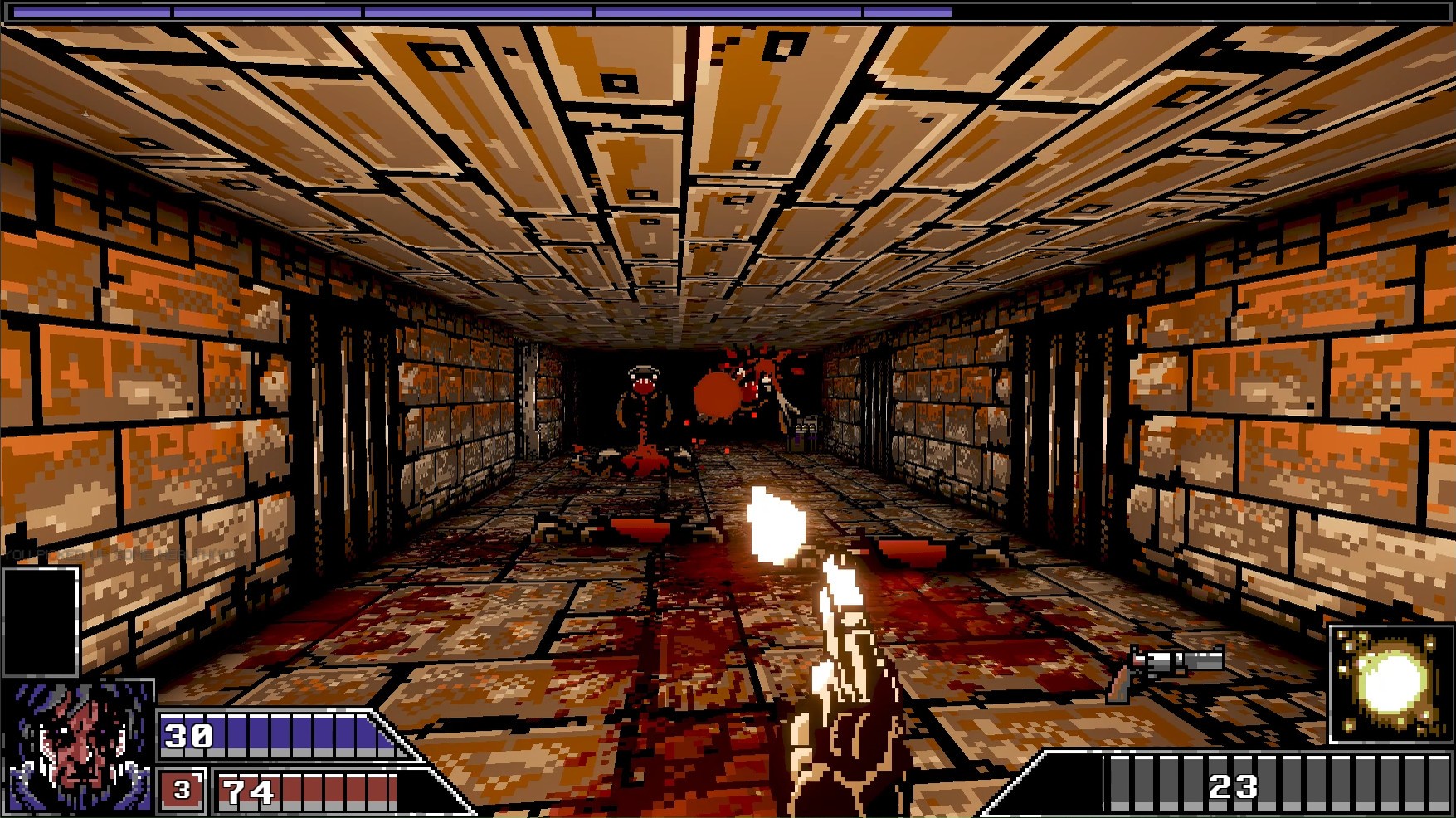 Players of a certain generation will remember that wonderful feeling when they first switched on Doom, wandering around the dark, claustrophobic tunnels, dodging projectiles, and hunting down demons, all while enjoying an early attempt at 3D graphics. You would batter your enemies with your fists, or a chainsaw, alternatively, you’d pick them off at range with a variety of guns. The latest generation of gamers doesn’t know what they missed out on, and if they are so inclined they can grab just a small ounce of that feeling by playing Buckshot Software’s retro FPS title Project Warlock. It has been published by Crunching Koalas and had such an old school feel to it, that I was giddy with excitement as I traversed the first level. Can there be anything more enjoyable than exploring dungeons, while destroying swarms of enemies? If there is, I’m yet to find it!

You control an unnamed Warlock who is on his journey across 5 unique worlds. He must; Slay unimaginable creatures, find secret rooms, obtain power-ups, and destroy bosses, all while staying alive, and making it to the exit. 60 levels of fast-paced action stand before you and victory. You have the opportunity to utilise 14 different weapons, and 8 different spells. Unlike Doom, Project Warlock contains some RPG elements, and you have the opportunity to level up your character and select specific perks that match your gameplay style. All 14 weapons that are available can be upgraded, allowing you to eventually select up to 38 demon destroying tools. Once you have made it to the exit of each stage, you are given the chance to utilise your skill points that you have earned at the Warlock workshop. Here you can buy any new spells, weapons, or increase perks.

Depending on what difficulty setting tempts you, you will find that death will either be upsetting or infuriating. You are provided with a set amount of lives, and when you lose them all, you will either spawn at the beginning of the level you are attempting, or death will be permanent, where you will have to restart the whole game. The second option is only for the most hardcore of gamers or the foolhardy. I attempted it, but after several failed runs, I decided that perhaps I wasn’t good enough to try it just yet. With no quicksave option available, you will have to leave yourself enough time to finish a stage. Only when you arrive at the Warlock workshop can you feel assured that your progress is safe. As you venture through the game you will note that the number of creatures per wave of attack increases vastly, with most of the gaming area being small and confined, you must quickly learn a way to dodge all attacks, whilst still taking down your opponents. With a small amount of practice you will soon be dodging projectiles, and staying out of reach of those demon claws. I certainly enjoyed flailing my axe at anything within arms reach, chopping them into unrecognisable bits was just one of the many benefits of being a Warlock on a mission. 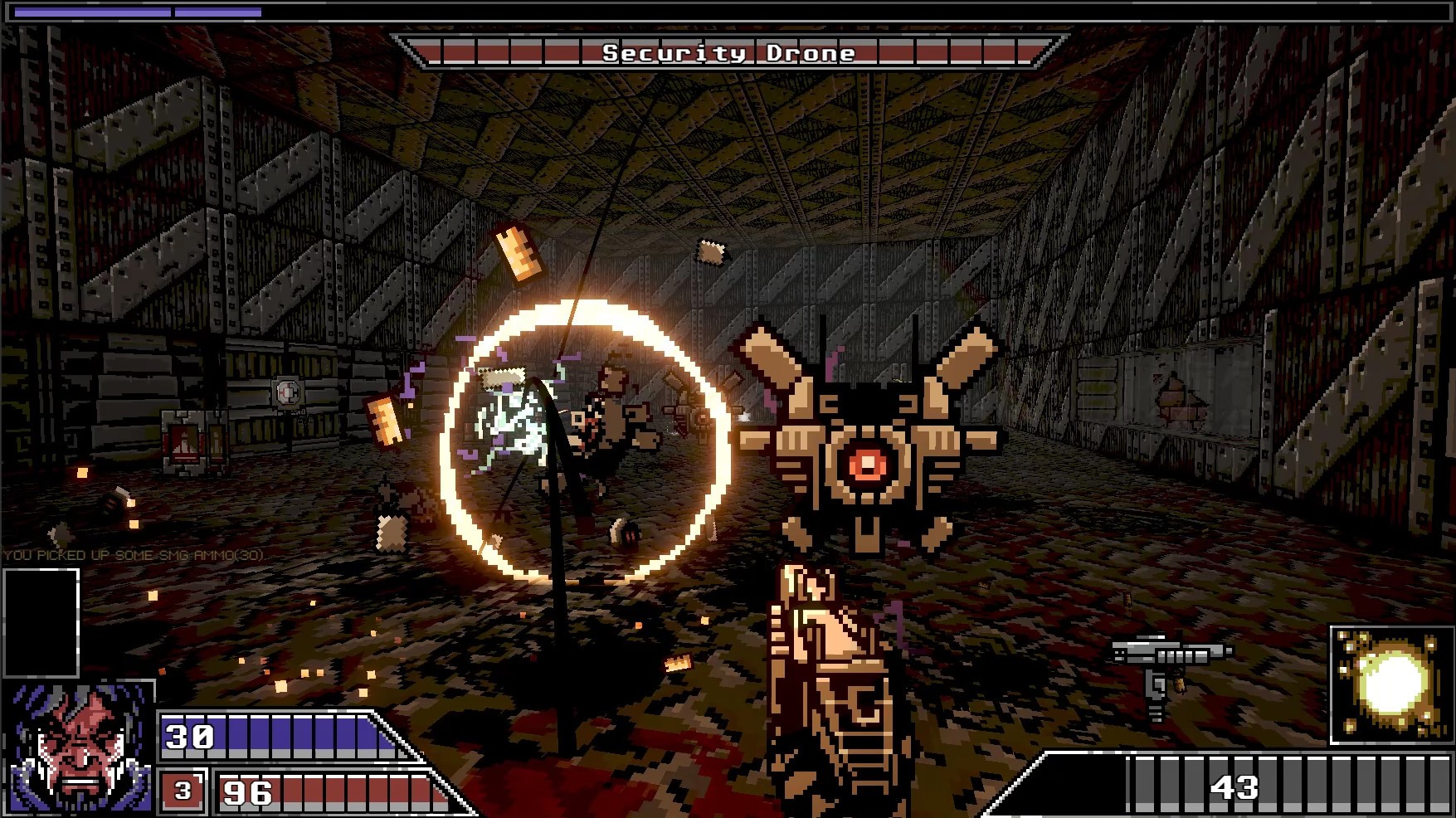 Once you have reached the end of each world, the usual claustrophobic walls give way to vast arenas where you must use the surrounding environment to better your deadly opponents. You must defeat the boss that guards the portal in order to progress. You must battle with; A demon known as the Sorcerer, A giant squid-like creature known as the Great Old One, and many more. Once you have defeated these heinous beasts you will be rewarded with a small amount of loot, and the ability to progress to another world. All this adventuring culminates with the chance to take down the final super boss. I’m not going to mention too much about this ungodly beast as I don’t wish to spoil the fun for you, but what I can say is that all the hard work is worth the effort, and its quite the rewarding finale to an epic fight.

The old school retro graphics may not be to everyone’s taste, especially as Doom Eternal retains a lot of the original gameplay style, but with a much more up to date look, and extremely smooth animation. The fight scenes are a blood bath, and it’s been hailed an outstanding success. For the gamer who’s happy to stick to their roots, and doesn’t mind something that looks a bit rough around the edges, then this will be a winner for you. Pixel graphics combined with the 3D images pull you back to the early 90’s gaming. The splatters of blood across the screen, and on the walls and floor make this as gory as any Doom title that you can get your hands on. The weapons all look and feel fantastic, and movement around each level is smooth and accurate. What makes this truly great is the requirement to move the crosshair through 3 dimensions, this really adds a layer of depth, and as a gamer, this keeps you on your toes. Each of the worlds look great, though each episode has a familiar theme to the level in which it’s associated. The enemies vary in style and looks, and the bosses really are menacing, and fill you with fear.

When I play an FPS title, I want the music to be pumping, and the weapons must fire with real ferocity. When my enemies are hordes of satanic beasts whose only goal is to rip my face off, I want them to fill me with dread and terror. Buckshot Software has achieved just this, the music is upbeat, aggressive, and gets you ready for a fight, it’s present throughout, and screams at you, what are we waiting for, just get on with it. Every weapon that you handle looks great, but more importantly, they sound amazing. The guns have deep and booming shots, the melee weapons swish through the air and land with a sickening blow, and each spell sounds mystical and unique. The roars of each enemy will make you think twice about approaching. When there is a spawn the overwhelming noise is hard to handle, and you end up just hoping that you will survive to fight another day. When a title’s audio makes you feel as brave as a superhero, but also as scared as a little child, then you know that the developers have done a great job. 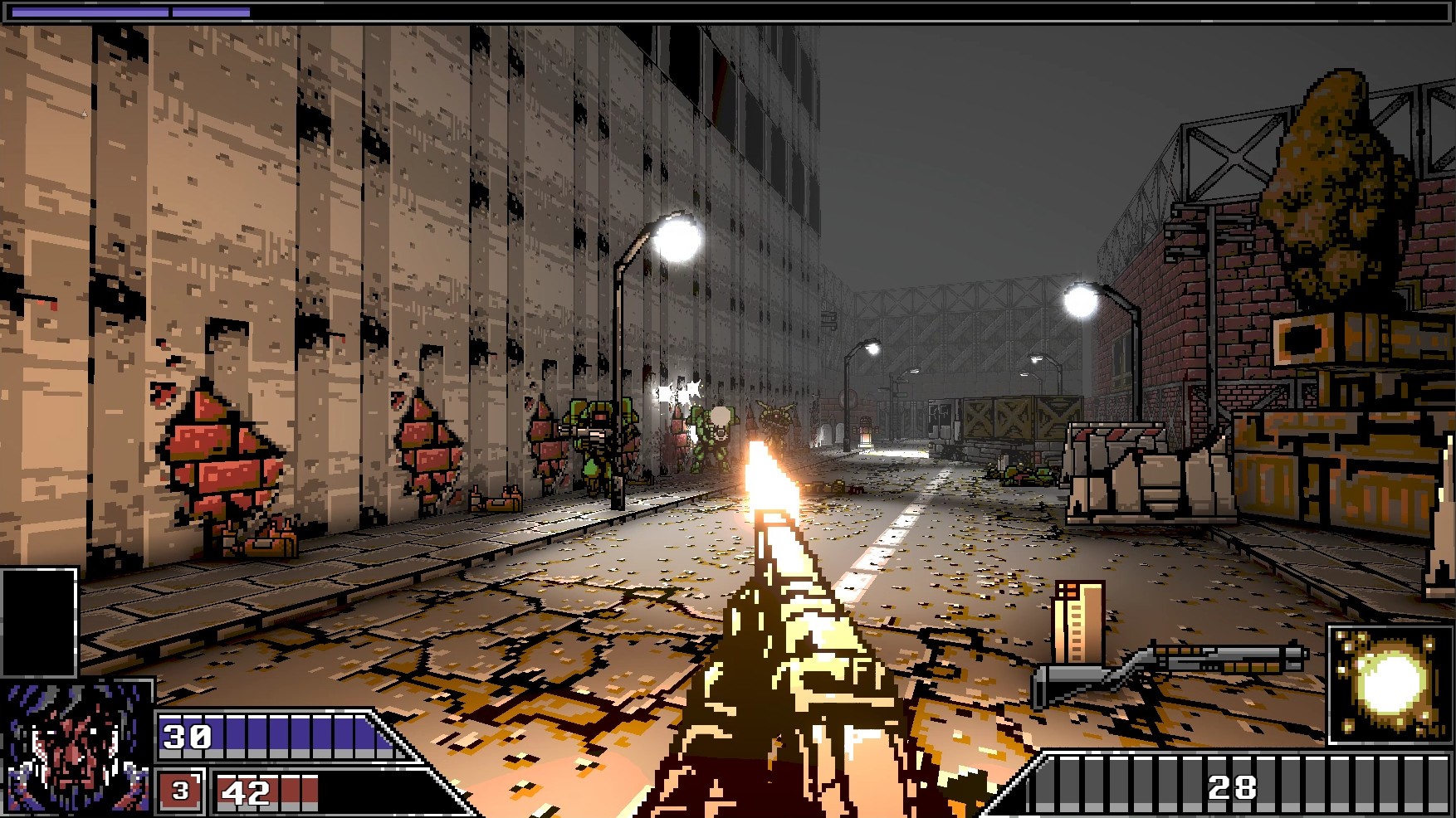 This was originally designed for the PC, and when playing, it’s obvious that it had been optimised for that platform. Though it’s not particularly tough to handle, it’s a little clunky in places. This is especially obvious with the weapon selector, on the PC this has been applied to the number keys, but on console you are given a radial menu which requires the player to use the left analogue stick and the RB to select a weapon group. I found that this didn’t always work, and in the middle of a fight you’d end up being hit an awful lot as you tried to select the correct tool. Once you got to grips with it, it wasn’t so bad, it just took away from the polished finish, and I kept thinking to myself, if only I could shortcut my favourite weapons, then it wouldn’t be so bad.

Project Warlock is a surprisingly big title, and its longevity is enhanced by the lives mechanic, and the lack of a quick save facility. You have the opportunity to search each area for secret rooms. What makes this more difficult is the lack of indication on the mini-map, nor will you see any hints in the dark rooms that you are exploring. It’s simply a matter of luck if you happen to stumble across them. This added so many more hours to the game than I care to think about. I couldn’t just carry on, I wanted to complete each world 100%. With 60 levels to play through, and 20 achievements to obtain, one of which requires you to complete it on the hardest setting, this game will take you around 15 hours to finish. You are looking at really good value for money, and fans of any FPS game will enjoy the challenges that they will face when playing this.

This is a remarkable game, its 18-year-old creator Jakub Cislo created it while still in high school. I could barely get out of bed to go to lectures, let alone create a successful and enjoyable title for the world to enjoy, so I have to bow and take my hat off to him. Clearly inspired by the giants of the genre Jakub found his own little corner of the market and made a fantastic game. You will find yourself getting lost, attacked by sneaky monsters, and losing your life while attempting to get to the exit, but you must take this in your stride, and you must master each world in order to overcome anything that Hell throws at you. Can you complete your task as a Warlock, and overcome the armies of darkness, or will you fail and allow the world to be run by an evil and satanical Overlord?

Can you overcome the armies of darkness, and repel everything that Hell has to throw at you? You must, the world is depending on you!