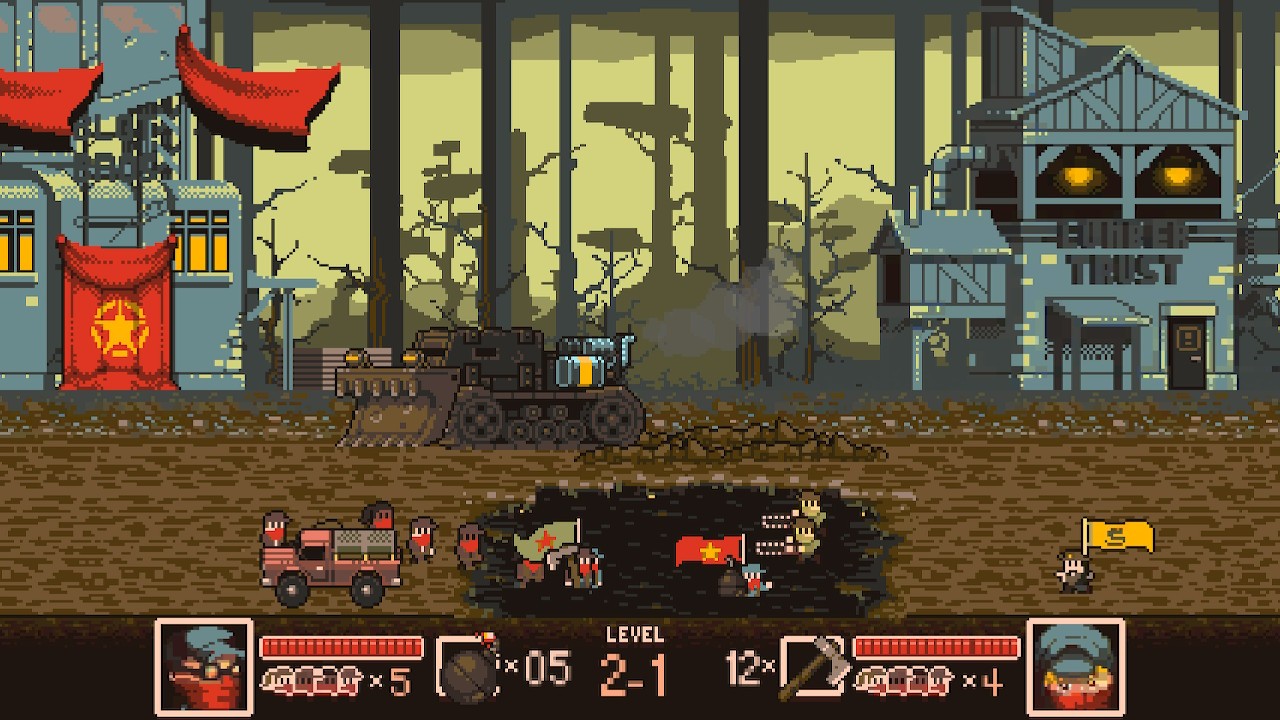 Imagine a world where the underground elitists rule and govern politics under a shady shroud, keep the workers at bay with low wages and high living, create corruption as the name of the game and generally form a capitalist state where every human being is enslaved by monetary values. Hang on! It’s not that hard to imagine is it? Mainly because, in many ways and for many of us, it’s how our lives are possibly dictated today. The truth behind it largely depends on how much you view the depth and scale of such rule or how we view our own, individual lives, believe in conspiracy theories or stories of fake news. For others though, it’s simply a way of life. However, it’s also the premise for Pixel Pushers Union 512’s newest game, as Tonight We Riot brings an uprising onto the Nintendo Switch.

Described as being “unapologetically political”, Tonight We Riot deals with the uprising of the working classes, as they form a revolution in the face of an overpowered and capitalist state. You play the role of a flag-bearing leader, in fact, one of many, who gathers the masses and takes charge on a full-frontal assault against the system. Presented in a pixel-art style, you lead an ever-growing mass of people through a variety of districts; largely working from the left to right in order to liberate a series of neighbourhoods. However, along the way, you have to confront a series of law-enforcement measures that have been put in place to stop your advance. Units such as riot police, drones, water cannons, tear gas and even giant robots need to be overcome, as well as watching out for environmental hazards that can slow your path or dwindle your masses.

In order to fight back against such resistance, you recruit members to your cause from a number of buildings that you pass along the way, or by taking out the influential money-men; causing the law enforcement officers they control to defect to your cause. As well as creating a growing crowd of restlessness, you also fight back against the authorities through the use of bare-fisted fighting and, as you progress, arm yourselves with bricks, baseball bats, molotov cocktails and anything else you can get your hands on that can act as a form of weaponry. In order to bring progression to the cause, you need to fight against the authoritarian blockades, protect your fellow rioters and recruit more followers to make your gathering ever larger. 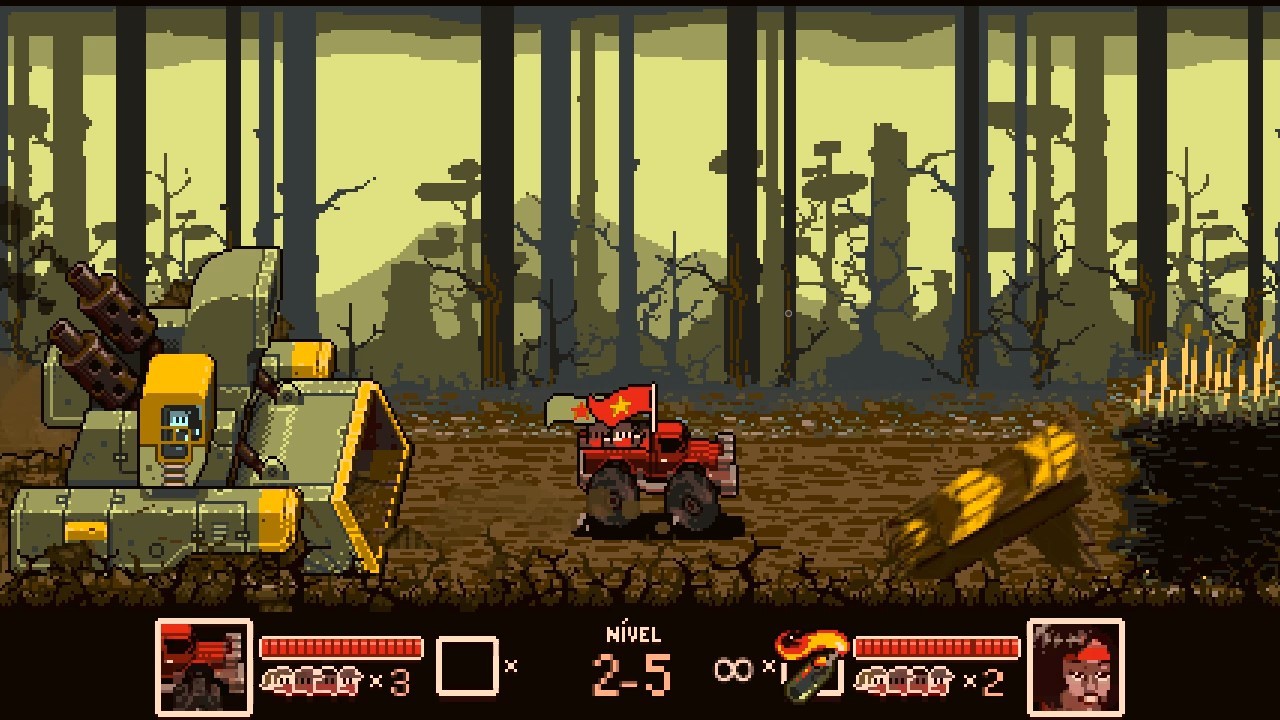 This soon becomes an important asset in order to be successful within each level. The more masses you gather, then the bigger the distraction to the armed forces that stand in your way. In some ways, the large crowds can act as a form of lives, as in order to overrun and liberate each neighbourhood, you need just one man standing, which is usually you. Should you lose your flag-bearing character, then another revolutionary stands in your place; until none remain and it’s game over. Your character also operates on a life gauge, so by reducing damage by being cushioned by the crowds can be a life-saver and often the difference between success and failure. You shouldn’t be complacent though about the crowds that surround you, as ensuring their safety can also be paramount, as completing each level with a certain amount of revolutionaries still by your side can grant a series of rewards that can strengthen the resolve of your rioting group.

As with any riotous situation, the larger the gathering, the more damage that can be dealt. It’s no different here, as you rush against the units that stand in your way and fight to eliminate them as quickly as possible; all with minimal casualties to your group. The more revolutionaries that remain, the better they become equipped; depending on your performance within each level. Make a successful stance, and instead of bare-knuckle fighting, your crowd can eventually become armed with wrenches, or outfitted with gas masks and shields, in order to make them a more sustainable group and deadlier force. Although primarily and out-and-out brawler, there is also a level of strategy that needs to be employed in order to be successful.

For the most part, the crowds follow you and your actions. Go all in and your followers will do too. However, you can also order them to gather at a particular spot, handy for solving some of the light environmental puzzles that stand in your way, tell them to attack a particular enemy or keep them away from danger as you deal with the threat yourself. How you lead your band of revolutionaries is entirely up to you. For the majority of the time though, the best strategy is to work out what you are up against and act accordingly; take out the enemy one-on-one or simply go all in and pepper the authorities with a barrage of bricks, sprinkling of molotovs and all-out fisticuffs. The game covers four distinct districts, each one housing four levels and an end-level boss fight, as well as an end-game level to fully test your mettle. Controlling the masses becomes ever-more important during these end-level encounters, as you fight against large-scaled robots, such as transforming office complexes, or huge beasts, such as a sunken ship that hides a terrifying titan. 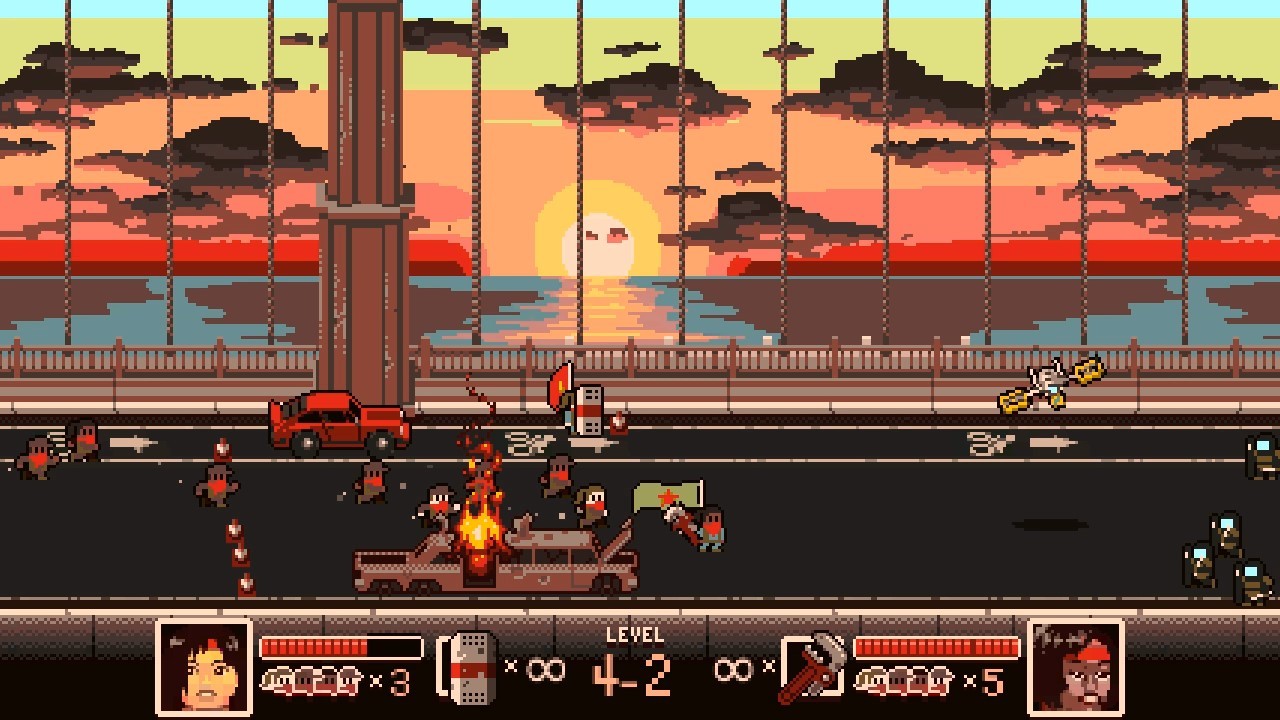 To add some variety to the gameplay, some of the levels also contain a chase-sequence style of play, one that sees you traversing the level in a vehicle as the authorities give chase. Here, you need to avoid obstacles, take to ramps and dish out the damage to shake off any unwanted pursuers. To bolster this further, you can also play two-player, local co-op to dish out double the damage, with each player using one joy-con each in riotous fun with friends. To add longevity to the title, you can also unlock an endless mode that pits you against an endless wave of enemies. However, the game itself presents a nice challenge for anyone looking for game that’s easy to play, yet difficult to master. Once the first district is liberated, the game puts up a real fight to keep you on your toes; never to the point of frustration though. However, as you progress and become better equipped, you can revisit previous levels that may have proven tricky in order to unlock its rewards.

Despite its content and subject matter, the game always maintains a sense of keeping its tongue firmly within its cheek. Yes, it’s somewhat violent and yes, it contains a level of gore and blood, but it’s all presented in such a way, that it’s never serious about what it tries to convey. Its fast-paced and action packed gameplay provides a real sense of pure arcade fun, and it’s in this premise that the game works really well. Its level of progression through unlocks and addictive lure of just one-more-go, or completing previous levels in order to better your earlier run-through, contains a high level of addictiveness in its gameplay. There’s a real thrill of attracting a large gathering, watching the bricks and molotov’s being flung around and breaking through the defences in order to liberate the neighbourhoods. It looks wonderful in a retro-styled level of presentation, yet its gameplay is distinctly modern. It’s all further backed by some great audio qualities too, both in soundtracks and effects.

Overall, Tonight We Riot is an absolute blast to play. Its blend of Streets of Rage meets Lemmings produces a fun and compelling experience, with its over-the-top depictions of gratuitous violence and rioting. It also presents a really good level of difficulty; one that is challenging, yet never unbeatable or frustrating. You won’t always get the maximum reward from a level during your first run, but as you gain in strength and ability, you can replay them in order to unlock their extra styles in weaponry, armour or techniques. It looks fantastic with its 16-bit throwback presentations, yet is also nicely detailed and the beating soundtrack fully compliments the mad-cap mayhem on-screen. Everything simply adds up to produce a game that is, well, a riot really.

Sticks and Stones will break their bones, as Tonight We Riot in this crowd-pleasing, arcade brawler.