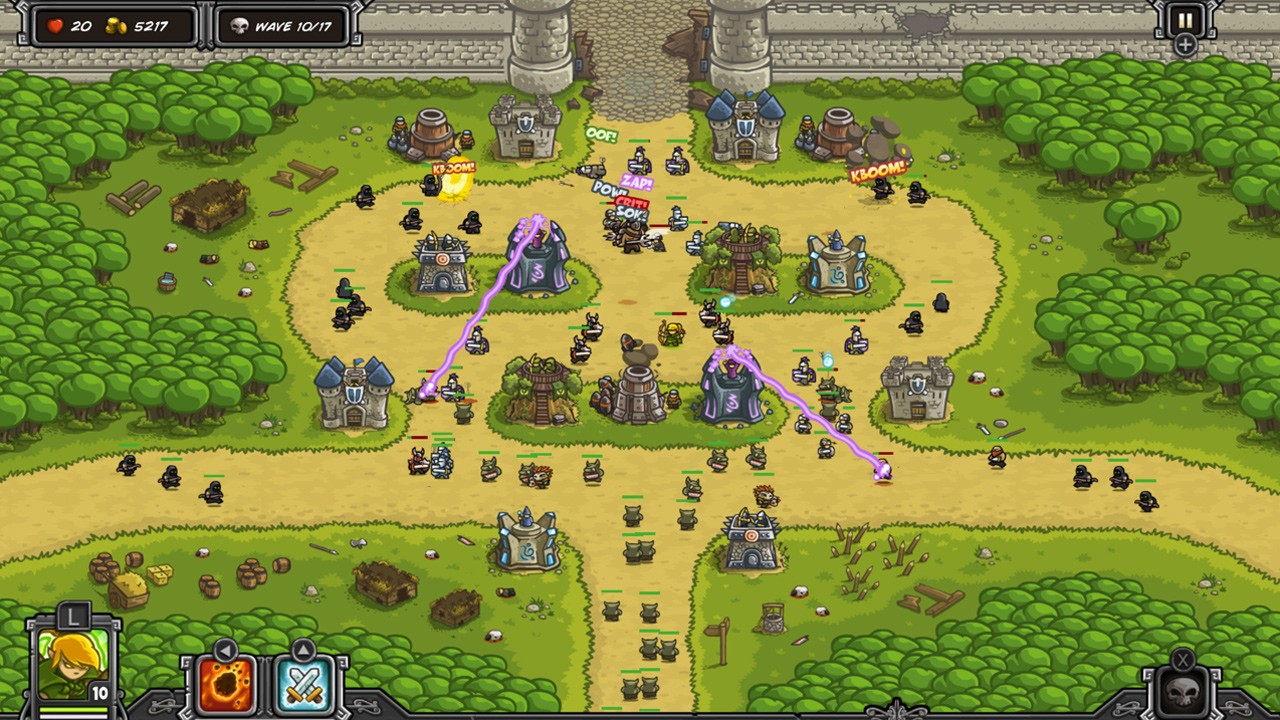 It was a simpler time, the time of early 2010s mobile gaming. The bubble had mostly burst in terms of turning a fast buck on the App Store or the Play Store: some people were finding purchase with Amazon’s storefront, but it was going slow and coins were still a thing (and they may still be, I just can’t imagine WHY). In order for your mobile game to make a splash, it either needed to be incredibly catchy, an inexplicable port of a console game, or at least the earliest incarnation of a Skinner box to milk people dry of their free time and fill their screen with ads. When Ironhide Game Studio entered the market with a tower defence title, they were already in good company. Fieldrunners had really carved out a sharp niche, Plants Vs. Zombies made Popcap rich, and it was up to other titles to come in and make it sparkle. So, with a little luck, some great design and positive ideology, the world were introduced to Kingdom Rush, and things have never really been the same. I mean, because of a lot of other stuff: it’s a good game, but it isn’t that good.

Kingdom Rush is a tower defence strategy game in a medieval backdrop, and it works reasonably well in both thought and execution. You need to prevent as many of the invading mobs from getting to your castle as possible through the creation of one of eight types of towers, each dealing some traditional forms of damage (arrows, melee troops, magic, single shot cannons, etc.). You get a star ranking based on how well you manage to defend yourself during the course of the level, and these stars aren’t just for show: they’re reinvested in upgrading the towers outside of battle to give them more oomph from the base level. At the same time, gradual progression allows for the towers to become further and further upgraded, which leads into further strategization during the course of a battle. You have a limited control over how fast or slow the waves come in, and you also have some spells that the player can cast based on cooldown (summoning extra troops, calling down a meteor). It’s all pretty textbook if you understand the essentials of tower defence. 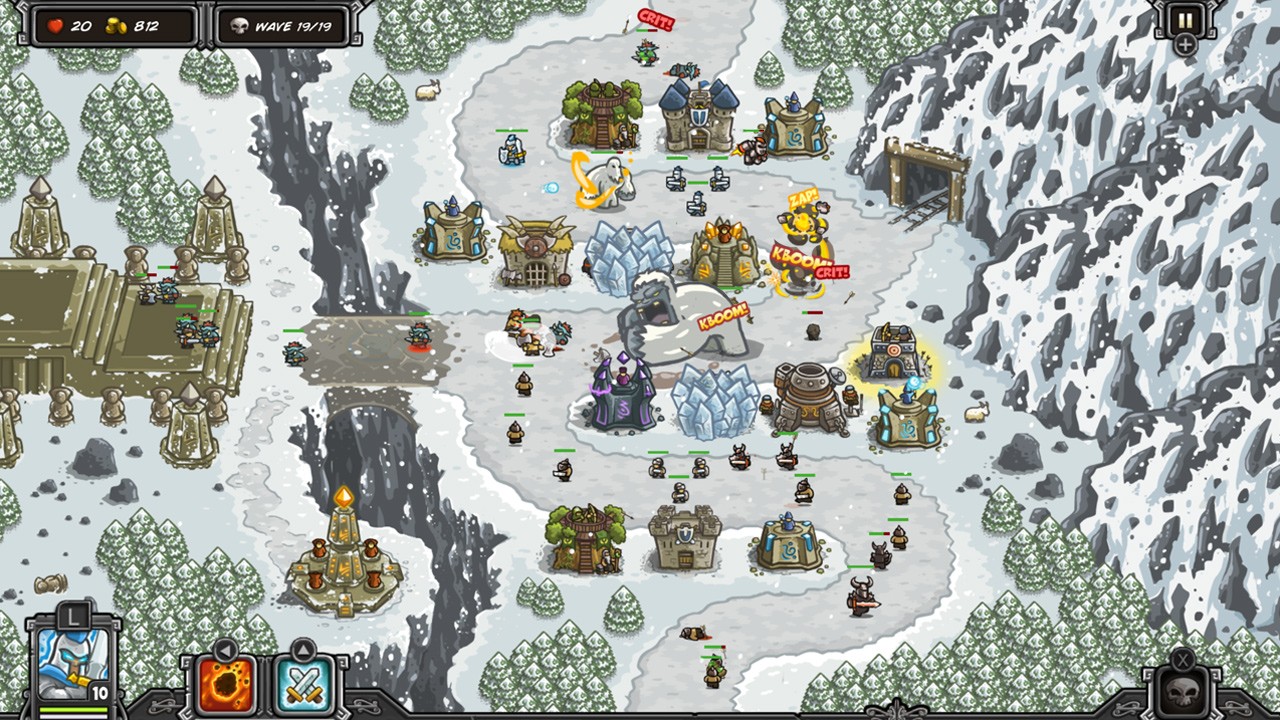 Best of all, you also get to choose a hero to lead your troops, a single grunt that has some serious leverage within the world of Kingdom Rush. A hero serves a triple purpose of mobility, strength and passive abilities. The hero can be assigned to different parts of the board and, by and large, do significantly more damage than most of the towers that you’re able to craft. Additionally, the heroes get skills of their own, some on cooldown for activation and some that just HAPPEN has they continue to level up and get stronger. Ignus, my hero of choice, actually sends out a wave of damage while healing himself arbitrarily in battle after a certain level, and he looks cool as hell as he does it. Plus, Ignus is obtained through the course of upgrading the aforementioned meteor strike, which means you’re already a badass God of the cosmos before you choose a fire elemental as your avatar. Hey, crafting your own narrative helps to make the game more interesting besides the short little blurbs about what’s happening and why enemies are attacking you between levels.

With Kingdom Rush, the name of the game is replay and more replay. Each time you finish a stage, you then unlock the ability to go back and try that level again under a different set of conditions that allow you to gain further upgrades and perks. For example, that level might have felt fairly easy, but would you gamble your unblemished record by trying it again without access to archers OR melee soldiers? Kingdom Rush understands that players who purchase the game are looking to become tower completionists: they want three stars on everything, and they want to look cool while doing it. Being able to complete both the Iron Challenge and the Heroic Challenge for a set level means that you beat the HELL out of it, all orcs, worgs and yeti be damned. I know those are all wildly different enemies, but they all exist somewhere in the game, so lemme have this moment.

For what it’s worth, Kingdom Rush is a fabulous port, especially for the Nintendo Switch Lite. There’s so many enemies that appear on the screen at any one given time, and you’d expect the number of draw calls to slow down the game, but there’s no discernible drop. The variety in sprites is impressive, with something like 80 different enemy types AND several flavours of boss that you need to deal with. You can switch seamlessly from touchscreen controls to button controls, and it really helps when you’re dealing with different issues and perspectives. For example, it can be helpful to have the fine tuning of the joystick to decide where to move your hero next, and then quickly reaching over to tap a spell and cast it somewhere in the realm. The install size is very pleasant, and it honestly could be put on nearly any Switch and a blast would be had. I can’t complain in regard to gameplay or performance, other than the obvious “If you didn’t like the first three levels, you won’t like the next twenty.” 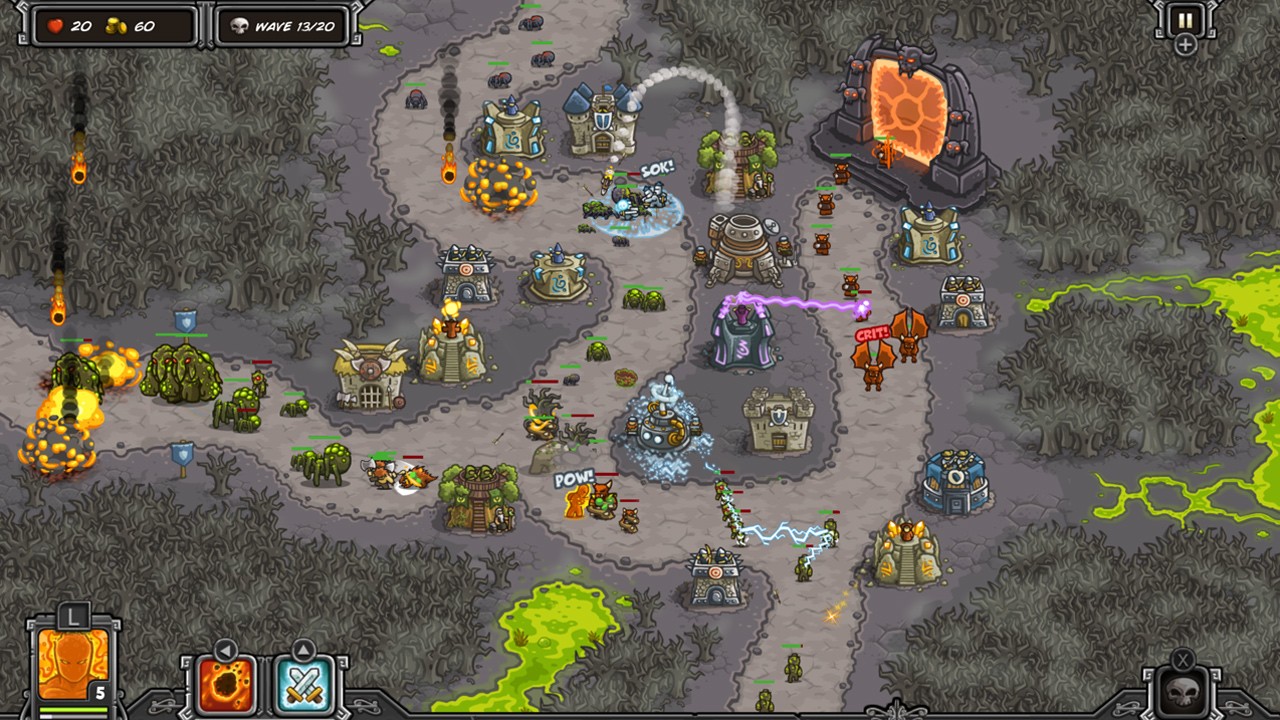 The thing is, I can’t honestly say if the release of Kingdom Rush onto the Nintendo Switch is a good idea or not. Let me be clear: I enjoy the Kingdom Rush franchise. I’ve been playing them on and off for years now, and they’ve always been exactly what I expected out of them. A good amount of strategy packed into a solid tower defence game, neither too easy nor too difficult, and succinctly balanced in part due to a high difficulty slope that the player themselves impose. However, there already is an entry onto the Switch in the form of Kingdom Rush Frontiers, which is the second game in the series and, in my opinion, vastly superior. It has more tower variety, new heroes, and more stages (if I remember correctly). Plus, Vengeance, the fourth title in the series, is coming out shortly, which puts players in a strange spot. You could grab this first Kingdom Rush because, well, it launches at a decent price and does have a lot of gameplay. Kingdom Rush may also have the nostalgia value that some games contain to younger generations, similar to the one I had when buying the original Doom or Duke Nukem. So, in that regard, I suppose it can’t be totally dismissed.

Kingdom Rush is a fantastic mobile title that deserves to be remembered, honoured and, occasionally, revisited. The series has progressed relatively far since the original inception, though it never deviated far enough from its roots to consider it apples to oranges. If you remember the initial title fondly in any way, it’s still just as memorable this time around, still a solid take on tower defence and easy enough on the eyes to enjoy. If you’re strictly looking for something new, or at least something that’s pinnacle, you might need to invest in Vengeance instead to get the most out of the whole storyline and gameplay. Still, if you’ve got twenty bucks to spare, you can get both and still grab some change.

Smartphone players of the early 2010s rejoice: the original tower defence that got so many addicted is now on the Switch, and it’s just as good as before.